Boy, 7, hailed hero after rushing back into burning family home through a window to save baby sister

A brave, seven-year-old boy from Tennessee carried out a heroic act by climbing through the window of his burning house to save his little sister.

The five-person Davidson family was in bed and asleep when the fire broke out at their home in New Tazewell, Tennessee, on December 8.

At about 11.30pm, Nicole Davidson woke up to the smell of smoke in the house and, within minutes, the house was engulfed in flames. 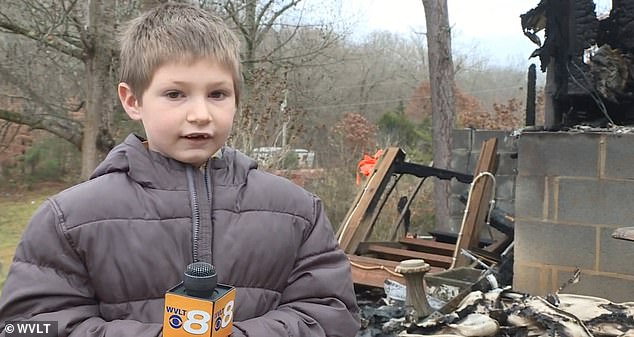 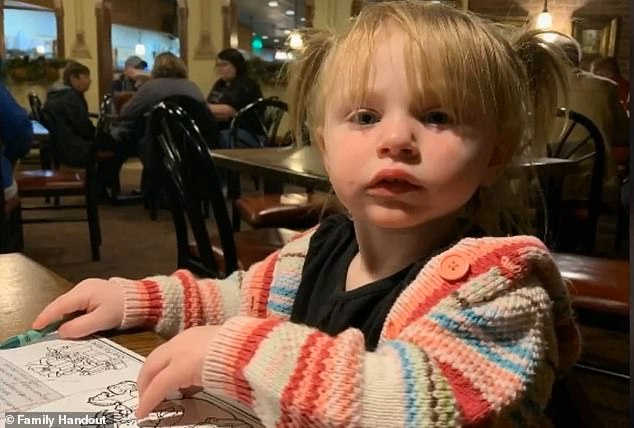 She and husband Chris Davidson, both former firefighters, acted quickly, with Chris using a fire extinguisher to help buy Nicole enough time to grab their children, she told WVLT.

‘I grabbed the boys because they were closest to the fire,’ Nicole said of her two sons, seven-year-old Eli and two-year-old Elijah.

Nicole was unable to get to the bedroom where daughter, 22-month-old Erin, was sleeping, however.

Once outside the house with their two sons, Chris boosted Eli into Erin’s bedroom window so that the young boy could rescue the toddler.

Eli grabbed Erin from the crib, handed her out the window and then escaped from the flames himself.

Eli added, ‘I was scared but I didn’t want my sister to die.’

Chris told CNN that the ‘smoke and fire was so thick’ that there was no way to reach Erin from inside the house. 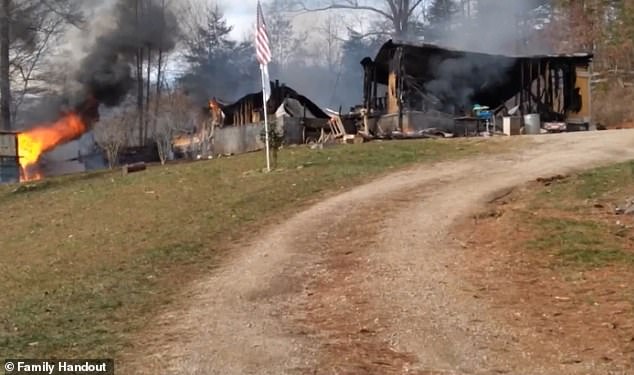 The Davidsons’ house (pictured) was completely destroyed by the fire. It’s believe the house burned down following an electrical fire 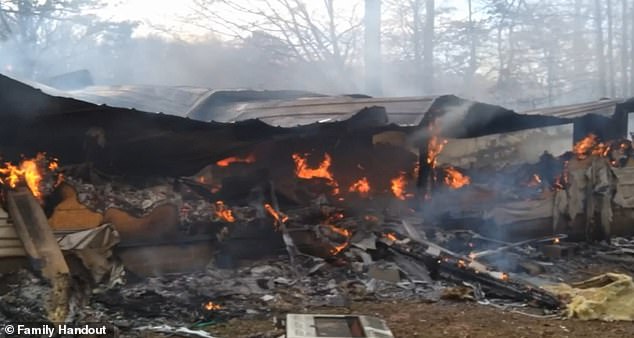 While Chris used a fire extinguisher, Nicole went to get Eli and two-year-old Elijah to safety because they were closest to the fire. The remains of the house are pictured 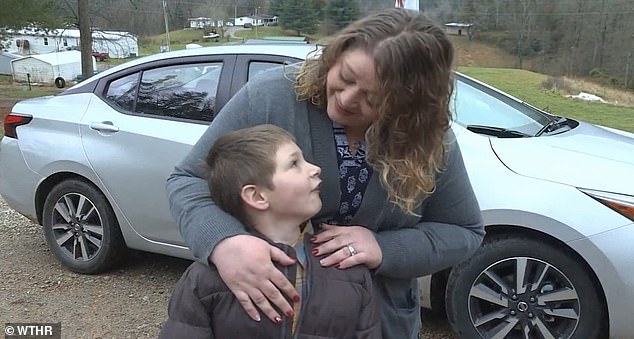 Nicole is pictured with Eli, one of the 34 children she and her husband Chris have fostered. Eli and Erin are their adopted children

‘We went outside to get to her from the window, but there was nothing for me to stand on to reach up there. So I picked up Eli, who went through the window and was able to grab her from her crib,’ Chris said.

‘We couldn’t be more proud of Eli,’ he added. ‘He did something a grown man wouldn’t do.’

‘It’s okay to be scared, but you’re brave inside and you can do it when you want to,’ Eli told WVLT.

Nobody was injured in the fire, but by the time firefighters arrived, the house was completely destroyed. Although an official cause hadn’t been declared yet, it’s believed that an electrical fire is to blame.

The Davidsons are currently living with a nearby relative.

Nicole and Chris have fostered 34 children over the years, including Eli, and adopted both Erin and Elijah.

The family is now starting ‘from scratch,’ after having experienced job loss during the coronavirus pandemic, the death of Nicole’s grandfather and now the destruction of their home and associated damage to their three cars.

‘We lost everything that we have ever had,’ Chris told CNN, ‘Our entire lives were in that home.’

He noted that ‘it’s devastating’ and ‘You have never been as humble as you are when you don’t even have your own underwear to wear.’

Since news of the incident and Eli’s heroic act made headlines, the Davidson’s have also received donations of household items, clothes and toys.

“I read several of he comments to him, and his reply to me this morning was Mom I’m gonna be famous. I still don’t think at his age he grasps what he has done and how phenomenal that is,” shared Nicole.

‘I could never repay anyone for their kindness that they’ve shown my family,’ Nicole told WVLT. ‘Please know that it will always be with me, it’s not something you forget about. I am beyond grateful.’

Nicole said that she had been reading some of the nice comments people have made on Facebook about Eli’s actions, to which he said, ‘Mom I’m gonna be famous.’

‘I still don’t think at his age he grasps what he has done and how phenomenal that is,’ Nicole said.