Two boy racers reached speeds of 70mph on 30mph roads moments before one of their vehicles struck and killed a former mayoress, a court today heard.

Assad Hussain, 23, hit former mayoress of Bolton, Gay Wharton, 58, while ‘racing’ around the streets of Bolton with Wasmi Iqbal, also 23.

Mrs Wharton, a grandmother, was walking into town to run some errands when she was hit by a black Audi, driven by Hussain, as she crossed a set of red traffic lights.

She was pronounced dead at the scene, despite the best efforts of medics who tried to save her life.

Hussain, from Bolton, was arrested a short time later, after handing himself into the police station.

Iqbal, also from Bolton, parked his car nearby and ran back to the scene of the crash.

Today Hussain, who pleaded guilty to death by dangerous driving, was jailed for seven years and four months and banned from driving for 10 years.

Iqbal, who initially denied the same charge before changing his plea to guilty, was jailed for four years and eight months and banned from driving for seven years and four months. 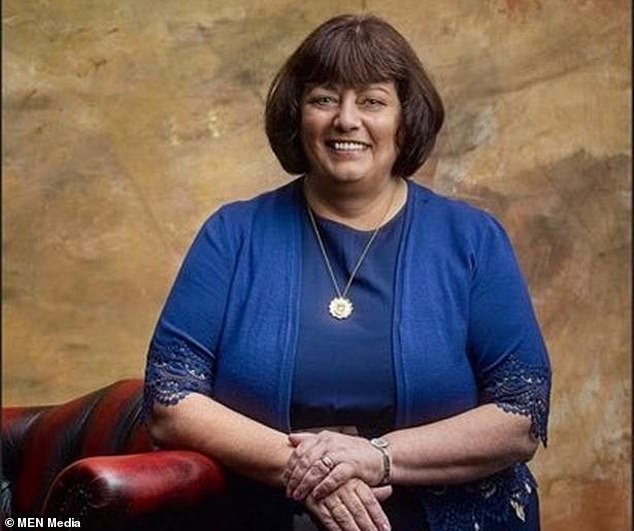 Former mayoress Gay Wharton, 58, was killed in hit-and-run as she crossed Chorley New Road near Bolton School at around midday on Friday when she was making her way to the shops

Mrs Wharton was well known in the town for her charity work, especially with the women’s refuge Fortalice and also set up a breakfast club for army veterans.

The grandmother – who worked at Russell and Russell solicitors – was mayoress alongside Cllr Martin Donaghy back in 2014.

Mr Donaghy led tributes to the mayoress, who also worked at Sainsbury’s.

He said: ‘Gay was one of our in-store trainers at Sainsbury’s and she was quite reticent about the idea of being a mayoress.

‘But I thought, no, she is going to be one of my mayoresses, and she really blossomed in the role.

‘And she continued with that work after her year as mayoress, particularly as part of Fortalice, because she believed in what they stood for. She was such a caring and concerned person.

‘I’m obviously devastated and my thoughts go out to her husband Steve and her family.’

Current mayor of Bolton, Cllr Linda Thomas, said at the time she was ‘devastated’ at the death of Mrs Wharton.

She added: ‘Gay was a lovely friend to so many of us. She touched so many lives and we all loved her.

‘She was an exemplary Mayoress and continued her good work being a great ambassador and fundraiser for Fortalice.

‘Gay made a massive contribution to the life of this town she will be sorely missed.

‘Our hearts go out to her family who we are all thinking about.’

Gill Smallwood, chief executive of Fortalice, met Mrs Wharton when she was mayoress and said the pair ‘got on instantly’ and became friends. 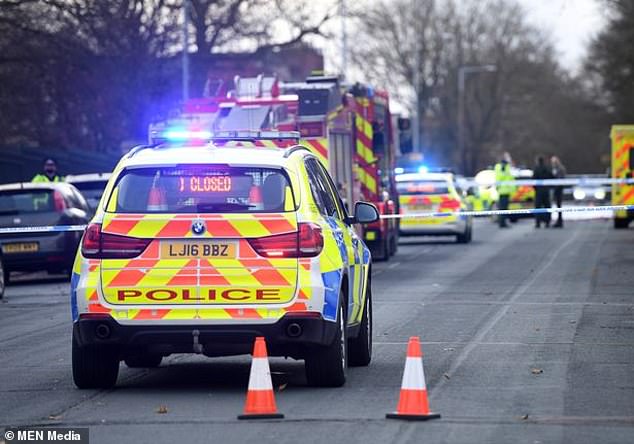 Police at the scene of the incident in Chorley New Road, Bolton, in November 2020

She said Mrs Wharton was ‘thrilled’ to be asked to become a patron and had worked hard for victims of domestic abuse ever since.

Gill said: ‘She was always at the forefront of fundraising for us.

‘She organised the Mayor’s Christmas fair for us and would always come to events with me.

‘She was always out collecting for us, fundraising and talking about us. She was a wonderful patron with a huge heart.

‘She was one of the kindest people she had ever met. She will be so missed, not only as a patron but as a very special friend to me.’

Leader of Bolton Council, Cllr David Greenhalgh, said at the time of her death: ‘Gay was one of Cllr Donaghy’s mayoresses and became across all parties a friend to many of us, involved in numerous charities and fundraising wherever she could.

‘Always with a smile on her face, always supportive, always committed to improving the lot of others.

‘Our thoughts and love from us all at the council go to her family at this tragic news.’