Between a rock and a hard place: Brave surfers rescue a whale shark after it became trapped between stones in shallow water next to a popular tourist beach

A whale shark has been rescued by a group of swimmers and surfers after becoming stuck in shallow water at a popular Queensland tourist beach.

Footage of the huge animal thrashing in the water just metres from the shore after getting stuck between two rocks was shared online on Wednesday.

Carley Jane Pan was at the beach in Noosa National Park when she spotted the whale shark and jumped in the water with some locals to set the marine marvel free. Whale sharks are the largest known fish species – as whales are classified as mammals – with the largest confirmed individual reaching a huge 18.8 metres in length.

They are listed as endangered species and feed on plankton and small fish – posing no threat to humans.

While the animals are found in most tropical waters around the world from as far north as Canada and south to Victoria, they generally stay in deeper water rarely venture close to shore.

People commenting on the shark at Noosa said they were amazed to see one near the beach.

‘Imagine seeing the fins out there,’ one person said.

‘A whale shark, how incredible,’ another said. 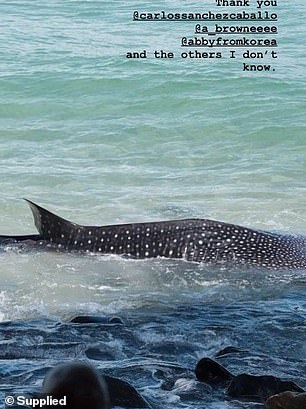 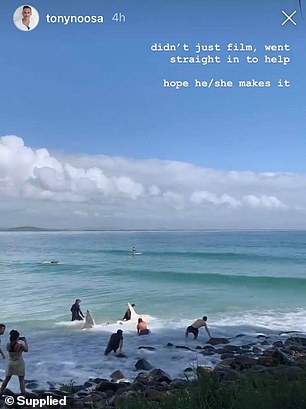 A famous tourist activity is to swim with the whale sharks at Ningaloo Reef in Western Australia.

The reef is one of the largest in Australia and is located about halfway up the Indian Ocean coast – at about the same longitude as Noosa and the Sunshine Coast on the east.

The Noosa whale shark is understood to have been freed without injury. 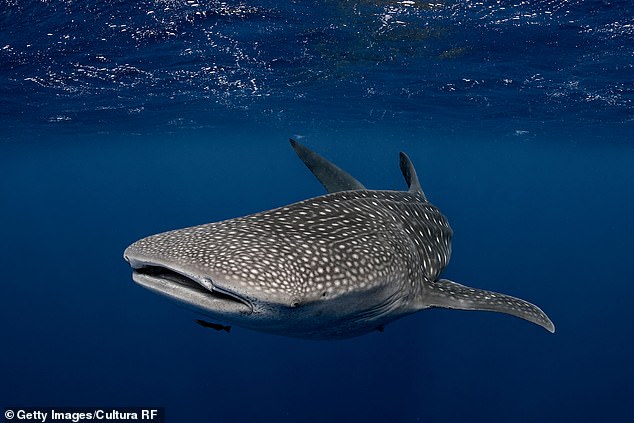