Brazil beat Peru by two in the first half.. Video 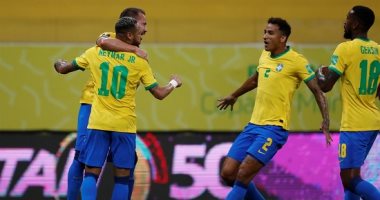 Brazil finished the first half of its match against its guest, Peru, with a clean double, in the match currently being held at the Arena Pernambuco stadium in Recife, as part of the tenth round of the South American qualifiers for the 2022 World Cup.

Everton Ribeiro opened Brazil’s goals in the 14th minute of the match, after following a cross from Neymar, who met it in the Peruvian net.

Neymar added the second goal of the Seleção team in the 40th minute, after following a rebound from the Peruvian team’s defense to easily put it in the net.

The Brazilian team entered the match tonight, and is at the top of the qualifiers with 21 points, after winning the sum of its previous seven matches, while the Peruvian team is in seventh place with 8 points.

The Brazilian national team started the match with the following formation:

The South American Football Confederation (CONMEBOL) issued an official statement on the crisis in the confrontation between the Brazilian national team and its Argentine guest. In his statement, “By the decision of the match referee, the match organized by FIFA between Brazil and Argentina for the World Cup qualifiers was suspended.”

As for the Peruvian team, it seeks to win despite the difficulty of the task, in order to advance in the standings, to qualify for the 2022 World Cup, after returning to participate in the last World Cup 2018 after a long absence.

“What else is there to expect?”