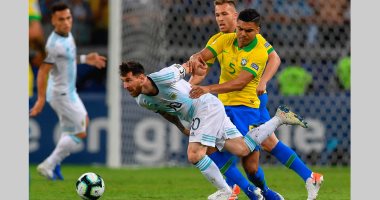 Brazil will host Argentina in a hot Clasico, at 9:00 pm, at the Arena Corinthians in Sao Paulo, as part of the postponed sixth round matches of the South American qualifiers for the 2022 World Cup.

The Brazilian national team enters tonight’s match, and is at the top of the qualifiers with 21 points, from winning all its previous seven matches, while Argentina is in second place with 15 points from winning in 4 matches and drawing in 3.

In the previous round, Brazil beat Chile 1-0, while Argentina beat Venezuela 3-0.

Tonight’s match is a repetition of the 2021 Copa America final, which was held last July, during which Argentina won their fifteenth title in the tournament, with a goal that came from Angel Di Maria.

As for the Argentine national team, led by the star Lionel Messi, it seeks to achieve a victory over its Brazilian counterpart, although it was not confirmed after Al-Flea’s participation in the match as a result of the injury he suffered in the last Venezuela match.

Brazil will meet in the next round of World Cup qualifiers against its Peruvian counterpart next Thursday, while Argentina will meet with Bolivia.

All you need to know about pancreatitis