Brazilian President Jair Bolsonaro said on Friday that if he were to order the military to take the streets and restore order, ‘the order will be followed,’ raising fresh questions about his politicisation of the armed forces.

Speaking during a TV interview, Bolsonaro declined to ‘go into details into what he is preparing.’

But he then said: ‘If we were to have problems, we have a plan of how to enter the field. Our armed forces could one day go into the streets.’

The comments by Bolsonaro, a far-right former army captain who has long praised Brazil‘s two-decade military dictatorship, will do little to assuage critics who fret about his politicisation of the military.

Others worry about his commitment to a peaceful handover of power in the event of a tight result in next year’s presidential election.

Pressure has grown on the president while Brazil’s coronavirus pandemic has spiraled out of control. 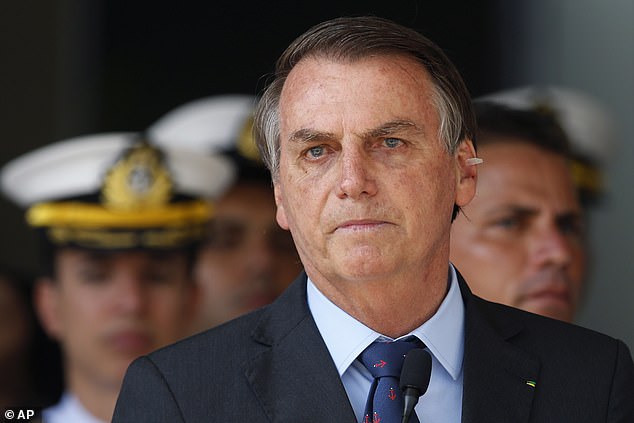 Jair Bolsonaro, pictured above, said: ‘If we were to have problems, we have a plan of how to enter the field’, adding: ‘Our armed forces could one day go into the streets’

He has faced widespread criticism for his handling of the outbreak in Brazil, which has the world’s second highest coronavirus death toll after the United States.

Brazil’s public healthcare system has shown growing signs of buckling under the caseload, and a survey by the National Association of Private Hospitals (ANAHP) this week suggests even the richest hospitals are running short on critical medicine.

Three out of four private hospitals said they have a week or less of supplies for treating Covid-19, including oxygen, anesthesia and essential drugs for intubation, according to the ANAHP survey of 88 member hospitals across the country.

President Bolsonaro continued to play down the risks of the crisis – insisting that ‘people die everywhere’, there is no use ‘crying over spilled milk’ and hitting out at state leaders for tightening lockdowns.

In response, Brazil’s senate opened an inquiry into his handling of the pandemic including whether the government was responsible for oxygen running out in hospitals in Amazoas state in January which has been blamed for dozens of deaths.

The leader of the Brazilian senate had been resisting the move, but his hand was forced after a judge ruled the inquiry should go ahead. 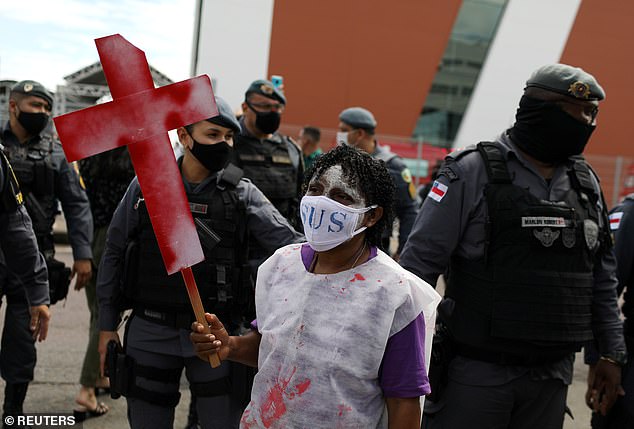 A woman carries a red cross as she takes part in a protest against Bolsonaro and his handling of the coronavirus crisis in Manaus, Brazil, on April 23

Last month, Bolsonaro put his former chief of staff in charge of the Defence Ministry and swapped all three commanders of the armed forces as part of a cabinet reshuffle that was met with shock from senior military officers.

Since his 2018 election victory, Bolsonaro has made baseless allegations of voter fraud in Brazil, which critics say could lay the groundwork to challenge upcoming elections in the same vein as his political idol, former US President Donald Trump.

Bolsonaro threw his support behind Trump’s conspiracies of a stolen election last year, which culminated in his supporters’ deadly January 6 assault on the Capitol building in Washington.