New surroundings but a familiar outcome for this west London derby with Brentford’s match-winner equally as inevitable.

Ivan Toney continues to excel in red and white stripes and his 12th goal of the season inflicted an eighth defeat for Queens Park Rangers in their last 10 meetings with the Bees.

It was a seventh game unbeaten for Thomas Frank’s side and lifted them up to fourth ahead of the weekend as last season’s beaten play-off finalists gradually pick up momentum. 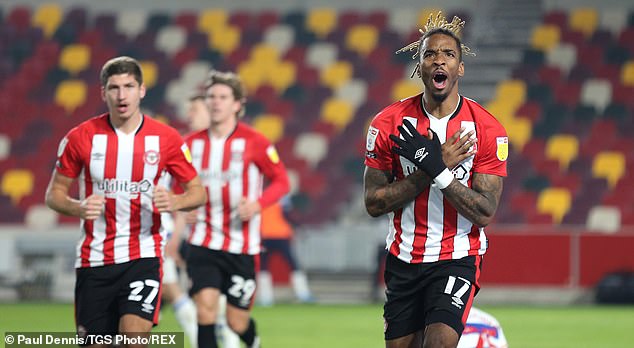 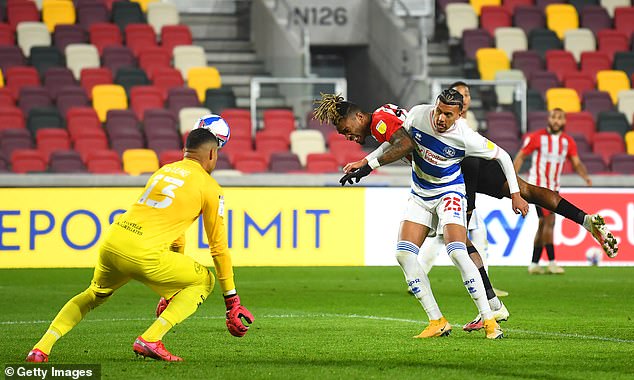 Not that Rangers rolled over by any means.

They were always in the contest and enjoyed decent spells in the ascendancy, especially late in the first-half after their own in-form striker, Lyndon Dykes, had cancelled out Vitaly Janelt’s early opener.

They also felt that Mads Bech Sorensen should have been sent off when, as the last man, he seemed to barge into the back of Dykes just before half-time.

Sorensen received only a yellow card and Brentford ultimately had the greater quality to seal victory, with any last hope of a Rangers rally ended by Todd Kane’s late sending off.

There’s usually plenty of spice about this west London derby but the absence of a crowd substantially diminished the occasion.

Fortunately, this should be the last crowdless match at Brentford’s new stadium.

With London placed into tier two in the great Covid carve-up, next Saturday’s game with Blackburn Rovers will see 2,000 lucky Bees fans allowed in.

Both sides compensated for the absence of any atmosphere by producing a lively first-half.

Perhaps the lack of Brentford fans was a factor in QPR’s positive start to proceedings and 10 minutes in they’d enjoyed 83 per cent of possession.

The game’s first chance went Brentford’s way, however, with Bryan Mbeumo’s bobbly effort from outside the box causing no problem for visiting keeper Seny Dieng. 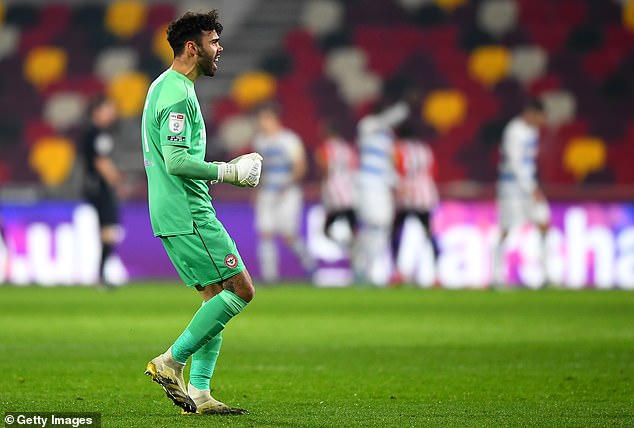 But that respite proved short-lived. Brentford, as they’ve done in most of their games here so far, drew first blood on the quarter-hour.

It started with Mbeumo, whipping in a cross from the right corner of the box that Toney flicked backwards to Rico Henry wide on the left.

Instead of crossing immediately, Henry cut the ball back to Janelt, lurking just outside the box and the German swept a beautiful left-footed shot first-time and through a crowded box into the bottom corner. 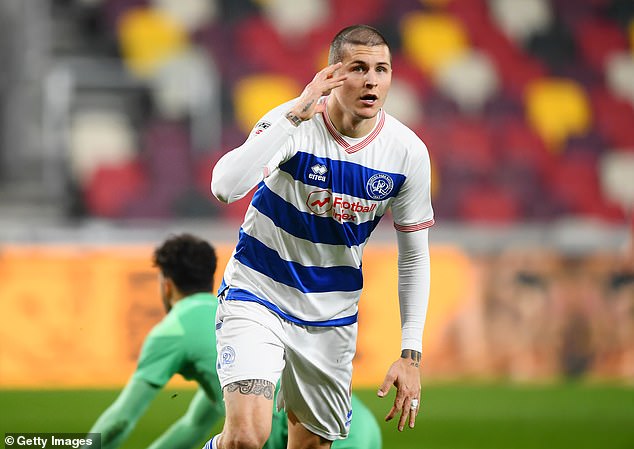 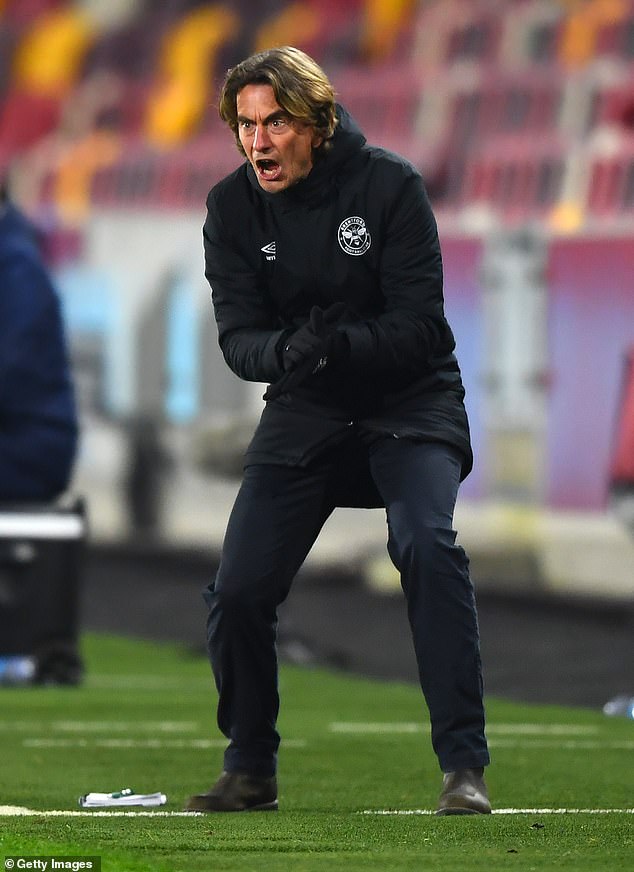 It was a first goal in English football for 22-year-old defensive midfielder Janelt, who signed from Bochum back in October. And indeed, his first shot on target in Brentford colours.

Rangers were briefly rattled and Dieng was sloppy with a pass out under pressure from Toney that fell straight to Emiliano Marcondes. But his shot was too close to the keeper, who atoned with a parry.

Brentford looked poised to take control of the match but a moment of individual brilliance by Bright Osayi-Samuel instead delivered an equaliser for the visitors.

Osayi-Samuel was well inside his own half when he spun with the ball, brushing off Tarique Fosu and, with Henry caught upfield, won a 50-yard footrace with Janelt.

Just as it looked as though he might be running out of puff, Osayi-Samuel wrapped his right foot around the ball and delivered the perfect cross for Dykes, who met it in the centre to send the ball high past David Raya. 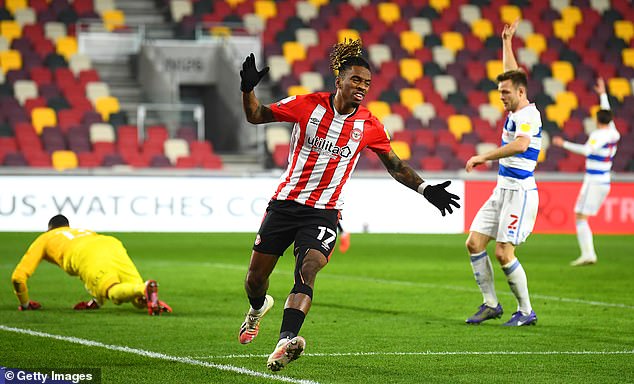 Dykes has been a revelation since his summer arrival from Livingston and that was his fifth goal since then and taken with a truly assured touch.

The dynamic of the game shifted again and QPR grew in confidence. Dykes was the target of a through ball and was ahead of Sorensen when the Brentford defender collided with him.

Replays showed definite contact with the arm and elbow of Sorensen into the back of Dykes and though the contact was outside the area, he was the last man and Rangers felt it should have been a red card as opposed to the yellow that materialised.

From the free-kick, Ilias Chair deferred to Yoann Barbet and the ex-Brentford man curled it into the side-netting with Raya taking no chances by diving at full stretch.

QPR ended the half much the stronger, with Dykes scything another shot badly wide and Raya pushing a Chair shot away.

Brentford thought they’d re-taken the lead 10 minutes after the restart when Mbeumo drifted in from the right and lofted a nice ball into Toney, who finished well but was met by the sight of a raised linesman’s flag. Replays showed it was tight in the extreme, with perhaps a slither of Toney’s arm and hand actually offside. 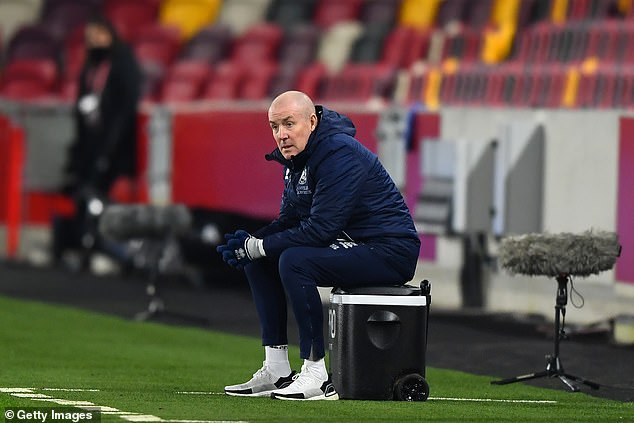 But Brentford’s leading scorer wouldn’t have to wait much longer to find the net.

Chris Willock tripped Mbeumo on the right and Brentford had an excellent chance to deliver. Marcondes took it and Toney stole in front of Niko Hamalainen to meet the cross with a diving header and the ball flew in at the near post.

Had there been VAR operating, it may have spotted that Toney reached out his arm as the ball came in. Like Patrick Bamford of Leeds United recently, it could well have been adjudged offside.

But such technology hasn’t yet come to the Championship and so Toney had a 12th goal since arriving here from Peterborough United.

Rangers looked for a response but when Kane was shown a second yellow card with seven minutes to play, his boot too high on Marcus Forss