Boris Johnson‘s controversial Brexit legislation which allows the Government to break international law has been backed by MPs.

The Internal Market Bill tonight cleared its final stage in the House of Commons by 340 votes to 256 and now passes to the Lords for further scrutiny.

It allows ministers to override parts of the Brexit Withdrawal Agreement brokered with Brussels last year, which critics also argue would also wreck the UK’s reputation as an honourable nation.

The Government insists it needs the powers to safeguard the integrity of the UK amid fears the EU could block goods travelling between Great Britain and Northern Ireland.

But the Prime Minister was forced to water down the legislation earlier in the Bill’s passage to appease a Tory backbench rebellion – MPs will now be given a vote before ministers are able to wield such powers.

This Bill sailed through the Commons with an 84-vote majority, with some Tories who did not want to rebel against their party choosing to abstain.

However the Bill’s smooth passage into law could be derailed by the pro-Remain Lords which has previously thwarted Brexit legislation. 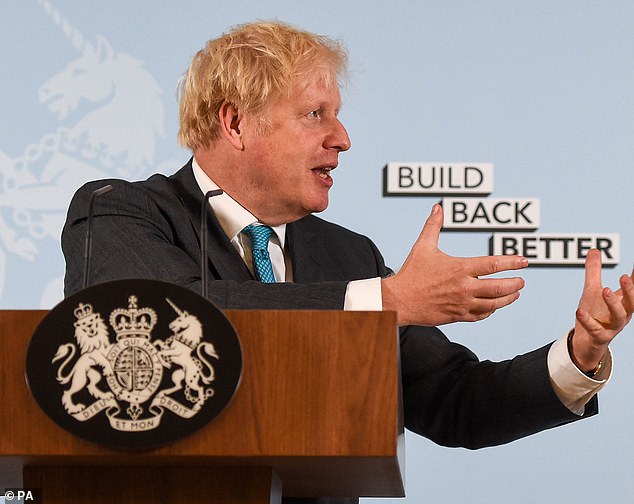 Opposition MPs have warned it will give the UK Government the chance to stray into matters which are devolved in Scotland, Wales and Northern Ireland, branding it an ‘attack’ on devolution.

Speaking at third reading, Business Secretary Alok Sharma told MPs: ‘Our approach will give businesses the regulatory clarity and certainty they want.

‘It will ensure the cost of doing business in the UK stays as low as possible, and it’ll do so without damaging and costly regulatory barriers emerging between the different parts of the United Kingdom.’

Addressing the controversial elements of the Internal Market Bill which enable the UK to override the Withdrawal Agreement, Mr Sharma said: ‘The reason we have taken powers to ensure that in the event we do not reach an agreement with our EU friends on how to implement the (Northern Ireland Protocol) is so we’re able to deliver on our promises in our manifesto and the command paper.

‘This is a legal safety net that clarifies our position on the Northern Ireland Protocol for protecting our union, businesses and jobs.’

He told the Commons: ‘On devolution, we on this side believe deeply in our Union but the strength of our Union relies on sharing power not centralising it, and this Bill does not learn that lesson.

‘It makes the choice to impose the rule that the lowest regulatory standard in one Parliament must be the standard for all without a proper voice for the devolved administrations.’

Mr Miliband said he fears the Bill will ‘strengthen the hand of those who want to break up the UK’.

He also said: ‘On international law, nobody should be in any doubt the damage already done by this Bill.

‘This law-breaking Bill has been noticed around the world.’

Mr Miliband highlighted reservations from US president Donald Trump’s Northern Ireland envoy, Mick Mulvaney, adding: ‘When the Trump administration starts expressing concern about your adherence to international agreements and the rule of law, you know you are in trouble. That is how bad this Bill is.’

Earlier in the debate, SNP MP Mhairi Black (Paisley and Renfrewshire South) also said: ‘This Bill explicitly gives any minister of the Crown permission to run riot with the very assets of Scotland that our Scottish Parliament has protected.’

She added: ‘It took us 300 years to get our Scottish Parliament and 20 years for this place to put a bulldozer right through it.’

The Bill will undergo further scrutiny in the Lords at a later date.