A bride has been branded ‘clueless’ and ‘cruel’ for using ‘animals as props’ after she revealed she wanted to rent a peacock to walk down the aisle during her wedding ceremony.

A friend of the bride, believed to be from the US, took to Facebook for recommendations on how to rent the bird ahead of the nuptials.

Their request was shared on the That’s It, I’m Wedding Shaming (non ban happy edition) Facebook group, where many said peacocks were aggressive animals that can ‘break your nose’ and ‘poop everywhere’.

Others compared the animals to ‘a flock of angry geese,’ and that a wedding with the birds would be a ‘massacre.’ 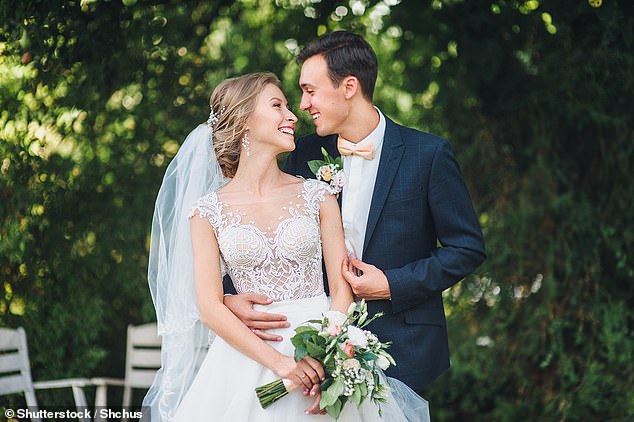 ‘Asking for a friend.. I was wondering if any of you knew where I can rent a peacock for a wedding. Quite possibly to walk down the aisle,’ the post read.

After it was shared on the wedding shaming group, many pointed out the practical issue of having a loud, undomesticated animal at a ceremony.

Some said the birds shrieks especially wouldn’t suit an emotional and heartfelt ceremony.

‘I’ve heard a peacock scream. I can’t imagine how loud they would be in a closed room. Bad idea all around,’ one wrote. 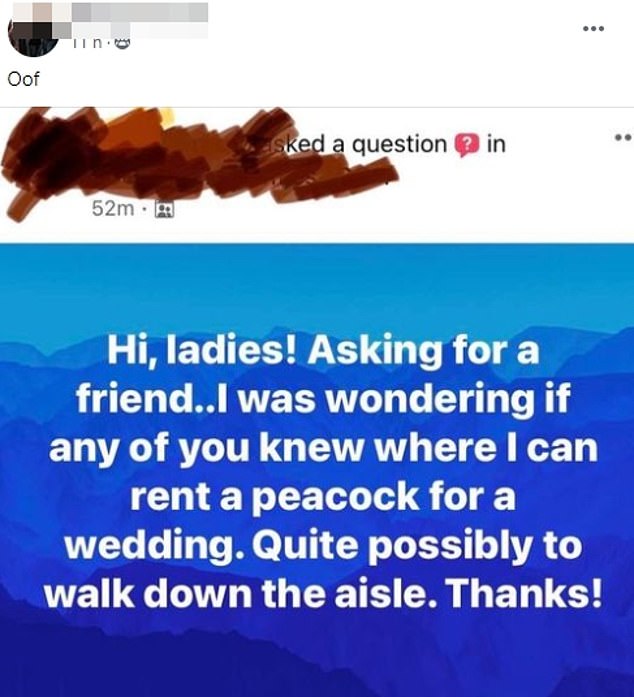 Can you domesticate a peacock or peahen? 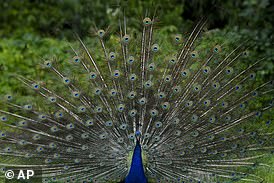 Peafowl are not traditional pets and can be aggressive (pictured: a peacock in Bucharest, Romania)

Peafowl can be tame and kept as pets. but they are not known for their friendly nature and require a lot personal space.

Peacocks are hard to domesticate and cannot be house trained.

Peacocks and peahens are beloved for their beautiful feathers, but need a lot of space to roam freely so they don’t get cage anxiety or damage their bodies.

The animals are not indicated for suburban areas because they are noisy and can jump over walls, promise to wreak havoc on the neighbourhood.

It’s not advised to keep more than one male at a time because males are territorial and will fight each other for the female’s attention.

Peacocks attacks on people are rare, but can happen. The birds can causer property damage if they catch their reflections in a shiny surface.

‘Because who doesn’t want their wedding vows drowned out by the screams of a giant angry folding fan,’ one said.

‘This person has never actually met a peacock,’ wrote another.

Some had words of choice to describe peacocks, who are not meant to be domesticated and require a lot of space.

‘Peacocks are crackheads in fancy clothing, they are not to be trusted,’ joked one.

‘Hot Tip™️: if you can’t afford a peacock but want the same end result, rent a flock of angry geese,’ another wrote.

‘I’m going to hard pass on a decorative murder chicken. That said – It would make a great drinking game. Drink every time a person screams,’ added one use.

‘I raise peafowl. This is a horrible idea. Peacocks get stressed very easily, have large talons, THEY CAN VERY MUCH FLY, and have wings strong enough to break your nose,’ another wrote.

Others suggested against using them as decoration, saying they’re not domestic animals.

‘Do not use them as a decoration. Buy some eyes on eBay, and just use feathers,’ they added.

Some said they hoped the bride would find a peacock for her ceremony, because the chaos that would ensue would be hilarious.

‘I really want her to find one. When Peacocks kick off they fully choose violence. Imagine that blood bath as your wedding story,’ one said.

‘Blood and feathers: the story of how a wedding turned into a massacre,’ one joked.

‘I hope that peacock goes buckwild, knocks over the cake, then escapes,’ one said.

‘I want this to happen so much and for it to go horribly wrong,’ another wrote.

‘Can someone tell me how to find this lady?

‘I just wanna send her a peacock so we can see the aftermath on here later.’ one said. 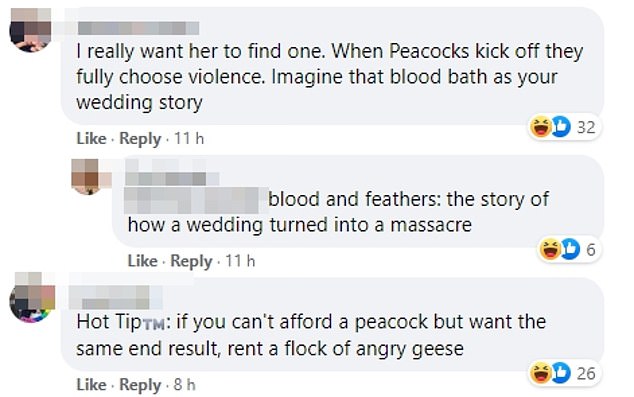 People called peacocks ‘murderous chickens’ and ‘crackheads in fancy clothing,’ as many said the bride shouldn’t use pets for her wedding