Brighton edged a point closer to Premier League safety with a goalless draw against Everton at Amex Stadium.

The Seagulls climbed a place to 15th after the low-key encounter – seven points clear of 18th-placed Fulham who have played a game more.

Brighton pushed for a winner late on but Neal Maupay lashed an effort over from 10 yards and Lewis Dunk had a header tipped over the bar.

The point did little for Everton’s hopes of Champions League qualification with Carlo Ancelotti’s side seven points adrift of fourth-placed West Ham with a game in hand.

They were without striker Dominic Calvert-Lewin because of injury and did not force Brighton goalkeeper Robert Sanchez into a save until the 71st minute.

Brighton closing in on survival

A win would have all-but secured another Premier League season for Brighton but a point was a decent enough result.

They offered almost all of the game’s attacking intent but, once again, were left rueing their lack of a clinical presence up front.

Of their 23 shots, Maupay had their two best chances. Had he shown more composure with a first-half effort that was deflected wide or later in the second half the three points would have gone to Graham Potter’s side.

“In terms of the performance I’m really happy,” Potter said. “We were the team closest to winning.

“We missed the last pass of that bit of quality in the final third but we are happy with what we have done. It’s a hard-earned point and a decent performance.”

Seven points from their past four games have moved Brighton clear of trouble. One more win and they will surely be safe. That said, Potter was keen not to take anything for granted.

“Everyone is fighting, there’s lots of good teams down there,” he added.

“None of them are going to give up, we just have to keep fighting.

“You have to be wary of everybody [at the bottom] until it is mathematically possible.” 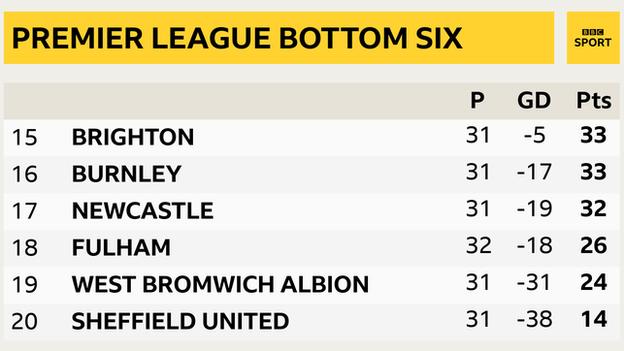 Everton started bright enough but regressed, severely lacking the focal point of their top scorer Calvert-Lewin, who was ruled out with an abductor issue.

They lacked creativity and were sloppy, with manager Ancelotti looking increasingly frustrated as the ball was repeatedly given away.

Alex Iwobi flashed a shot over in stoppage time but it would have been an unjust victory had the ball crept below the crossbar.

A lengthening injury list, worsened when Yerry Mina limped off in the second half, saw defender Mason Holgate start in central midfield and seven members of an eight-man substitutes bench having just two Premier League appearances between them.

The loss of important players is a clear factor in a season that is stalling badly.

A Champions League place looked a real possibility a five weeks ago – the Toffees were fifth, a point behind fourth-placed Chelsea with a game in hand – but Everton have now gone five games without a win in all competitions for the first time since December 2018 under Marco Silva.

“I think the attitude of the team was good, the quality of the play was not so good,” Ancelotti told BBC Sport.

“We were affected by the absences. In midfield we only had one attacking player available so we had difficulty building up and reaching our strikers with efficiency.

“The attitude and the spirit was good. We defended well, we tried to build-up from the back, but we had difficulty creating chances.”

50 up for Ancelotti at Goodison – the best stats

Brighton’s next game is on Tuesday, 20 April against Chelsea at Stamford Bridge (20:00 BST), while Everton host Tottenham on Friday (20:00 BST).