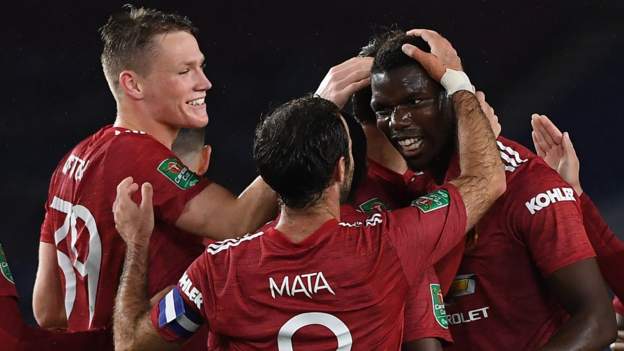 Manchester United beat Brighton for the second time in four days, with Paul Pogba scoring a free-kick to help seal their progress to the quarter-finals of the Carabao Cup.

On Saturday, Ole Gunnar Solskjaer’s side needed a dramatic late penalty, awarded via VAR after the full-time whistle had blown, to beat the Seagulls 3-2 in a game packed with incident.

This was a less frantic and fun affair, played out by largely second-string sides and in periods of torrential rain.

And it was settled in far more routine fashion, with midfielder Scott McTominay finding space in the box to head home Juan Mata’s free-kick from close range in the first half.

Having sent on both Pogba and Marcus Rashford, Mata then sealed the result with a cool finish from inside the box after he was found by a neat flick from Donny van de Beek.

Pogba added the garnish with a direct set-piece that found the top corner via a deflection.

It was an otherwise even game for large periods, with chances for both sides.

Odion Ighalo hit the side-netting from an angle after taking the ball around home goalkeeper Jason Steele, while Leandro Trossard drew a superb save from Dean Henderson in the United net with a shot from close range.

Mata and Bailly state their case

In recent weeks the prevailing narrative around Manchester United has been their inability to recruit players to improve last season’s squad.

In making 10 changes, Solskjaer gave another opportunity to his second string to demonstrate that the actual strength of the squad is superior to the perception of it, with only much-maligned centre-back Victor Lindelof keeping his place.

The main beneficiaries were Mata, who once again showcased his creative qualities in midfield, and Eric Bailly, who put forward a decent case to replace Lindelof for Sunday’s game against Tottenham.

Henderson did himself no harm with a solid display, including that fine save to deny substitute Trossard.

In contrast, the likes of Dan James, Ighalo and others who have been linked with moves away from the club during this transfer window did little to further their case for greater inclusion, and it was noticeable how much the visitors improved when Pogba and Rashford were introduced.

Regardless, the side achieved the task for which they were selected: keeping United in contention for what would be a first piece of silverware in four seasons.

Only once in their history have Brighton reached the League Cup quarter-final, doing so in 1978-79 before being eliminated by eventual winners Nottingham Forest.

Graham Potter’s team selection suggested they were less inclined to match that achievement than they are pursuing their interests in the league.

As the first team did on Saturday, the Albion understudies acquitted themselves pretty well throughout much of Wednesday’s game, competing with a much more experienced United side for the majority of it.

They were undone again, though, by defensive deficiencies at set-pieces.

On a positive front, Ben White – along with Lewis Dunk one of two players preserved from the weekend – once again looked assured, albeit with work still to do on his positioning, while Alireza Jahanbakhsh and Alexis Mac Allister showed flashes of their ability.

But Pogba and Rashford are a different level of opponent than James and Ighalo and it was their introduction, at a time when Albion were looking their most threatening, that ultimately took the game away from the home side.

Brighton face a tough trip to Everton in the Premier League on Saturday (15:00 BST kick-off), while Manchester United host Tottenham and former boss Jose Mourinho the day after at 16:30.