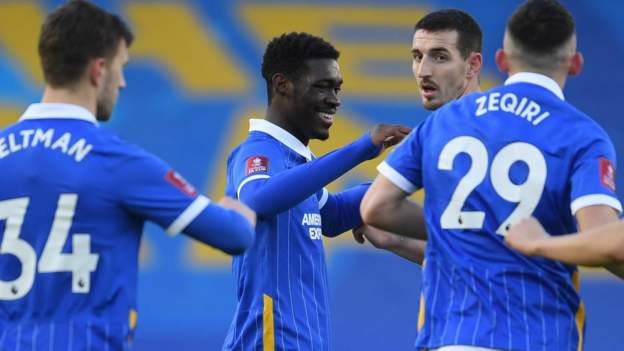 Yves Bissouma netted a stunning goal as Premier League Brighton edged out League One side Blackpool to reach the fifth round of the FA Cup.

Bissouma’s near 30-yard effort found the top corner in the 27th minute before Luke Garbutt’s cross was stabbed home by Blackpool’s Gary Madine.

The hosts face the winners of Brentford v Leicester in the next round.

The Bees take on in-form Leicester in the fourth round on Sunday at 14:30 GMT.

Visitors Blackpool, who had a Covid-19 outbreak in the squad, made seven changes to the side that beat West Brom on penalties in the last round.

The Seagulls – who had progressed from 13 of their past 15 FA Cup ties against sides from a lower division coming into this tie – started the sharper at the Amex Stadium, with centre-backs Lewis Dunk and Adam Webster both going close from corners.

They were deservedly ahead midway through the first period courtesy of Bissouma, before a defensive lapse saw Blackpool’s Madine beat his marker and level matters just before the half-time whistle.

Mac Allister had a curling shot well-saved by Tangerines keeper Chris Maxwell in the 55th minute.

But the Welsh stopper was cruelly wrong-footed moments later as Alzate inadvertently netted his first goal for Brighton.

Maxwell denied Mupay and Davy Propper in the closing stages as Brighton reached the fifth round for the third time in the past four seasons.