The sixth round of the English Premier League competition, “Premier League” for the current season 2021-2022, ended yesterday evening, Monday, with a positive tie between Crystal Palace and its counterpart Brighton, with a goal each. 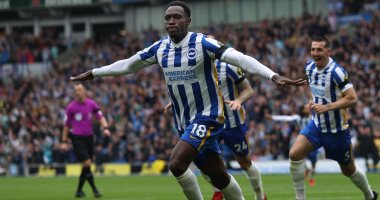 Crystal Palace advanced through Wilfried Zaha from a penalty kick obtained by himself in the last minute of the first half, and he successfully executed it to the left of the goalkeeper’s right. David Gaeta in a superb way to score the equalizer.

Brighton is sixth in the English Premier League

Brighton raised its score to the 13th point in sixth place, one point behind leaders Liverpool, and Crystal Palace’s score rose to the sixth point in 15th place.. 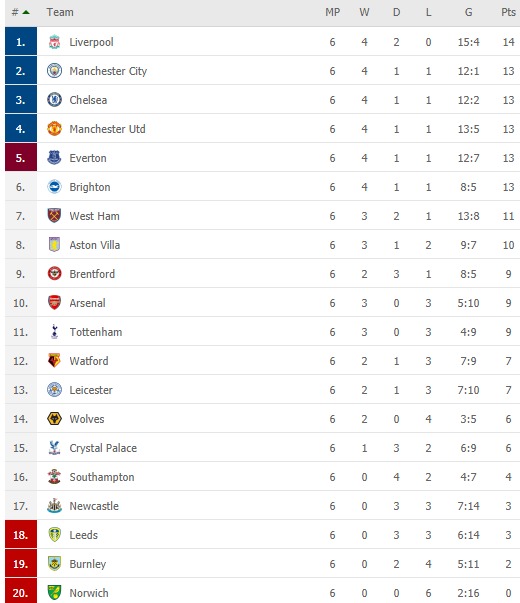 Liverpool, a professional in its ranks, leads the Egyptian star, Mohamed Salah, in the English Premier League standings, with 14 points, after its exciting draw with its host Brentford team, 3-3, taking advantage of the fall of Chelsea and Manchester United, losing against Manchester City and Aston Villa, 1–0..

Liverpool is one point ahead of 5 clubs equal in the same balance of points by 13 points, but they differ only in the goal difference between them.

Manchester City came in second place with 13 points, after their valuable victory over its host Chelsea, which is third with the same number of points, but City outperforms the goal difference..

Manchester United finished fourth with 13 points after losing to Aston Villa with a clean goal, and with the same balance, Everton came in fifth place, after beating Norwich City 2-0.

Arsenal scored a 3-1 victory over its neighbors, Tottenham, during the match that brought the two teams together, on Saturday evening, at the Emirates Stadium, the Gunners stronghold in the north London derby, at the top of the sixth round matches..

Arsenal occupies tenth place in the English Premier League table with a second consecutive victory with 9 points, while Tottenham occupies 11th place with the same balance of points.

Brighton will meet Arsenal in the seventh round match at home on Saturday 2 October.

Brighton raised its score to 13 in sixth place, refusing to lose, but it missed a historic opportunity to take the lead.

After one season in the former First Division in 1982-1983, Brighton waited until 2017 to return to the elite league with its current name, the Premier League, without achieving better than fifteenth place out of 20 teams (15th, 17th, 15th and 16th, respectively)..