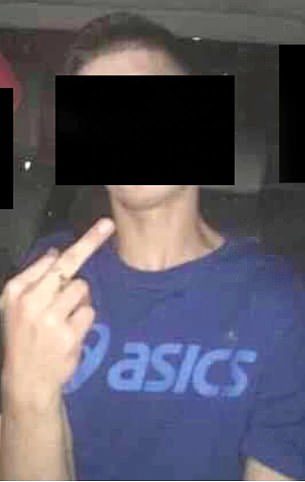 
Just minutes before he allegedly murdered a young couple as they walked their dog on Australia Day, a teenage driver taunted another car as he waited at a red light.

The 17-year-old then allegedly sped off up the road before losing control and running down Kate Leadbetter and Matthew Field at Alexandra Hills, in Brisbane, on Tuesday.

The teenager was allegedly on drugs and at the wheel of a stolen Toyota LandCruiser when he murdered Ms Leadbetter, 31 – who was six months pregnant – and Mr Field, 37.

But because he is underage, the driver cannot be identified.

In the wake of the tragedy, chilling footage emerged allegedly showing the same driver using the LandCruiser to ram a Hyundai i30 in an unprovoked road-rage attack.

The teen pulls up next to the i30 at a red light and makes rude gestures from the the driver and his disabled son, before veering into the side of the car when the light turns green and then fleeing the scene at high speed. 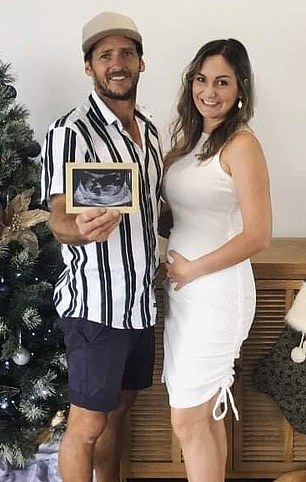 A 17-year-old (left) has been charged with two counts of murder over the horror deaths of Kate Leadbetter and Matthew Field (both right) at Alexandra Hills, in suburban Brisbane, on Tuesday

The Toyota LandCruiser that the teenager was allegedly driving lies damaged at the scene of the horror crash around 5.30pm on Tuesday. Moments earlier it had allegedly been used in a road rage incident on a nearby road

Chris and Angela Fleming, who were waiting at the traffic lights behind the i30, captured the shocking road rage incident with the teenage driver on video.

In the footage – which has been shared 6,000 times on Facebook – the teen can be seen making rude gestures out the window.

Then when the light turns green seconds later, the i30 attempts to escape the the abusive teen.

But the LandCruiser speeds up and veers into the car’s rear left door, causing it to spin.

Mrs Fleming goes from laughing to unleashing a chilling scream before urging her husband to ‘follow’.

The couple then call triple zero and ask for police, before pulling up behind the Hyundai i30 driver who had stopped by the side of the road.

Police allege that just minutes later the teenager sped through a red light, ploughed into another vehicle and then veered off the road – hitting and killing Ms Leadbetter and Mr Field.

The teenager faced Brisbane Children’s Court on Wednesday and was remanded in custody.

The Courier Mail reports he was on bail for 50 unrelated offences at the time of the crash.

Ms Leadbetter and Mr Field were taking their dogs Frankie and Django for their usual afternoon walk when they were struck. 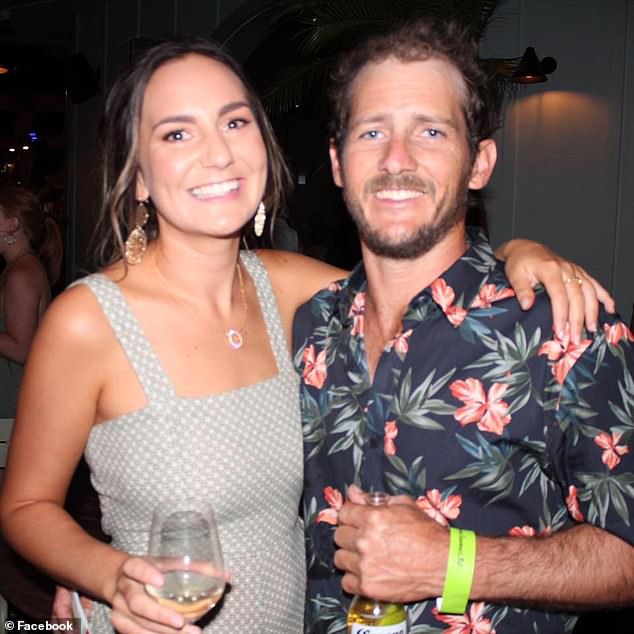 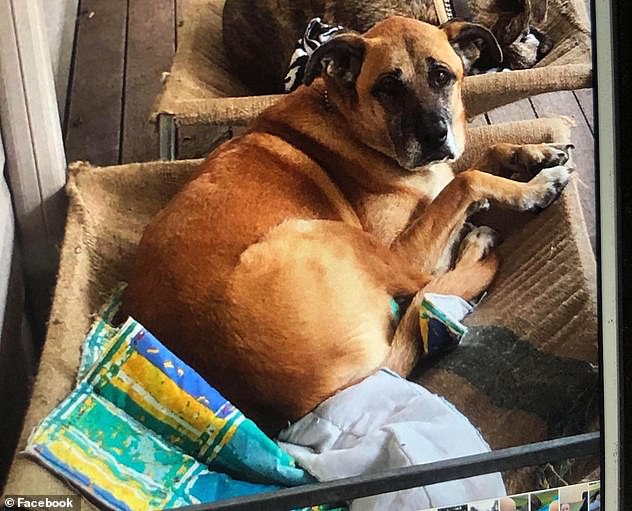 Frankie (pictured) survived the horrific crash but fled the scene in terror immediately after. He was found by a large search party in dense bushland the next morning 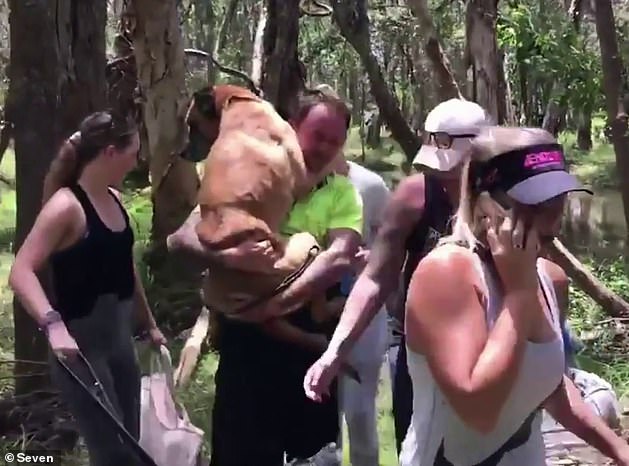 Ms Leadbetter and Mr Field’s dog Frankie is carried out of bushland on Wednesday morning at the end of a long search by locals, friends and family to find the dog

But in a tragic twist of fate, friends of the pair have revealed they went on a different route to normal that day.

Queensland Police Assistant Commissioner Brian Codd said even the most hardened members of the force had been rocked by the tragedy.

‘We, the police department, along with our community, are hurting. Dealing with this sort of tragedy – which is preventable – is incredibly frustrating,’ he told the Today show on Thursday.

‘I’m limited by law [by what I can say]. I’m not going to compromise our investigation and prosecution.

‘The reality of it is… It’s something that does my head in.

‘I am angry. I’m angry and my people are angry. They’re frustrated and they’re heartbroken… Can you imagine going and telling a family about the loss of a loved one? It has an impact on our people but we’re providing them enormous support.’ 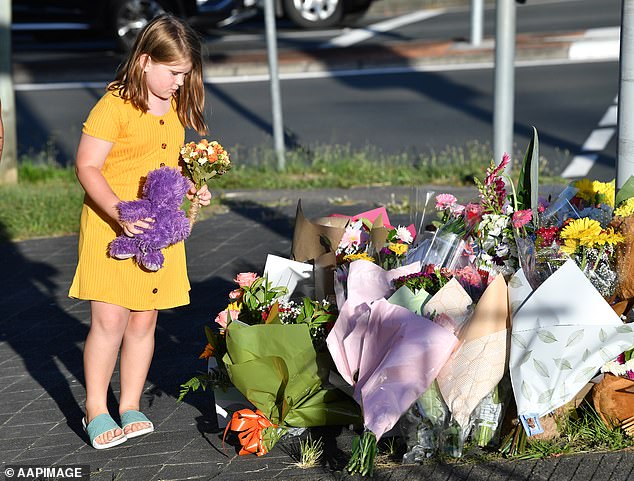 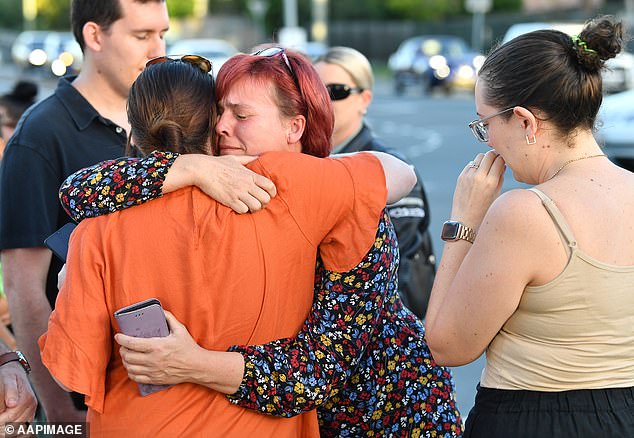 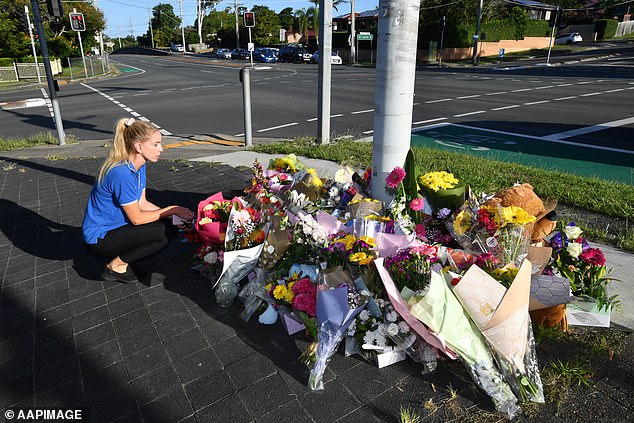 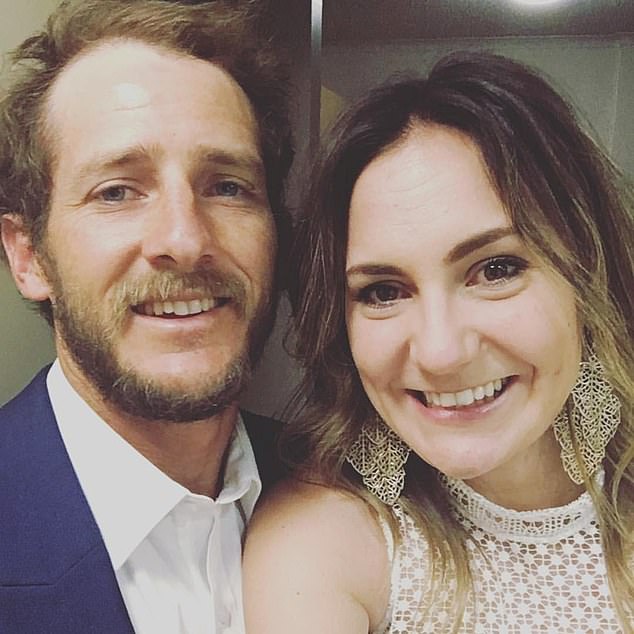 Ms Leadbetter, 31, and Mr Field, 37, died instantly, while their dog Frankie who they had been walking, fled from the scene

‘Just at Christmas. Holding a picture of their unborn baby. Their whole lives ahead of them,’ he said on Thursday morning after learning of the couple’s walking route.

‘But in one horrifying moment on a bayside suburban street that was ripped apart.

‘As they left home to walk their dog, we learn this morning they made a fateful decision, turning left when they would ordinarily turn right.

‘Moments later, they were struck and killed.’

Locals banded together on Wednesday night at a vigil on the corner of Finucane and Vienna Road – the intersection where the parents-to-be tragically lost their lives.

Ms Leadbetter’s aunt, Danielle Leadbetter, bravely spoke out about the horrific crash which claimed the life of her ‘beautiful’ niece.

‘No parent should have to bury their child. Ever. I feel sorry for everyone involved. The paramedics, police, the people who witnessed it. You never get over a traumatic event,’ Ms Leadbetter said. 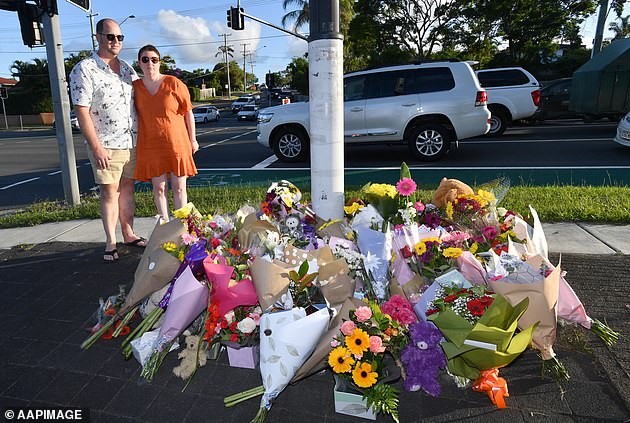 The shattered aunt and uncle of Ms Leadbetter, Danielle and Jason Leadbetter (pictured at vigil), said they would always remember their ‘beautiful’ niece 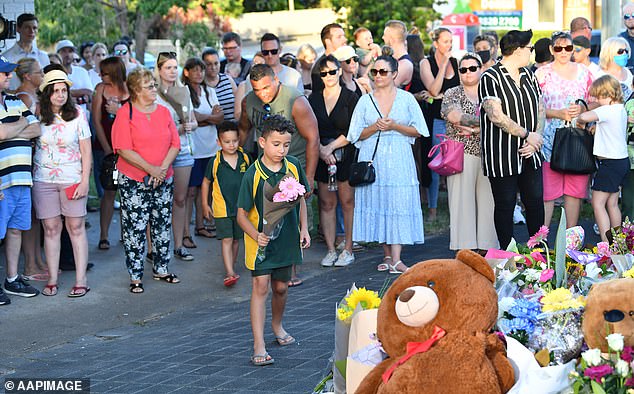 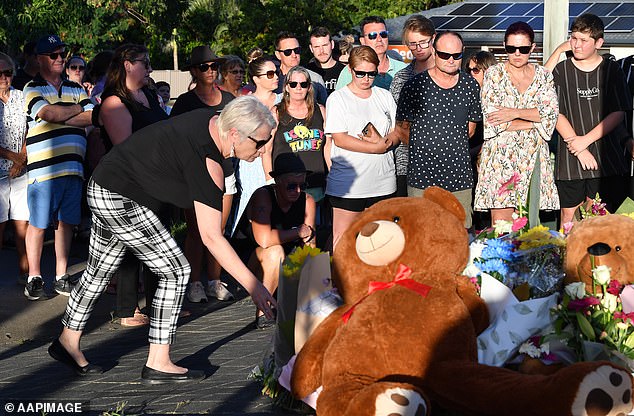 ‘She was just everything that is beautiful in this world so Queenslanders posting on social media, I’m reading it, you’re angry, let’s change the laws, take this anger and challenge it into something positive so it’s not your child that you are burying one day.

‘I hope that Premier Annastacia Palaszczuk and our lawmakers are watching this.’

Countless bouquets of flowers and teddy bears were laid at the scene while loved ones bravely spoke out about the loss of the couple.

Distraught residents found comfort in each other’s arms as crowds turned up to honour the young couple.

Candles were laid around the memorial which is only expected to grow as the vigil continues on into the night.

A little girl was captured in a heartbreaking photo laying a bouquet of flowers at the couple’s memorial while two other distraught children were seen sitting arm-in-arm.

Prime Minister Scott Morrison offered his condolences and said his ‘heart breaks’ for the friends and families of the victims.

‘Three beautiful young lives gone in the blink of an eye. I cannot begin to imagine the grief their families are feeling,’ he wrote on Wednesday night. 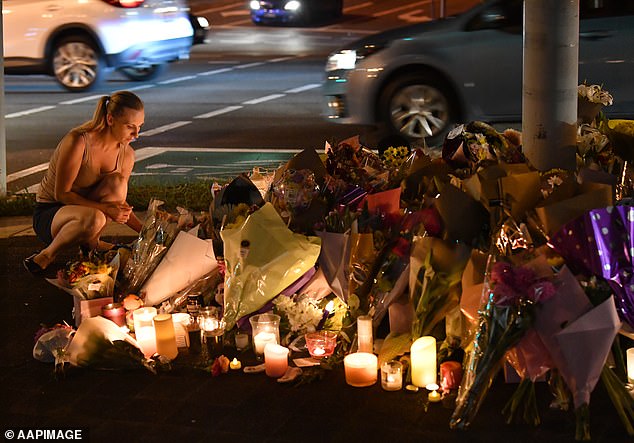 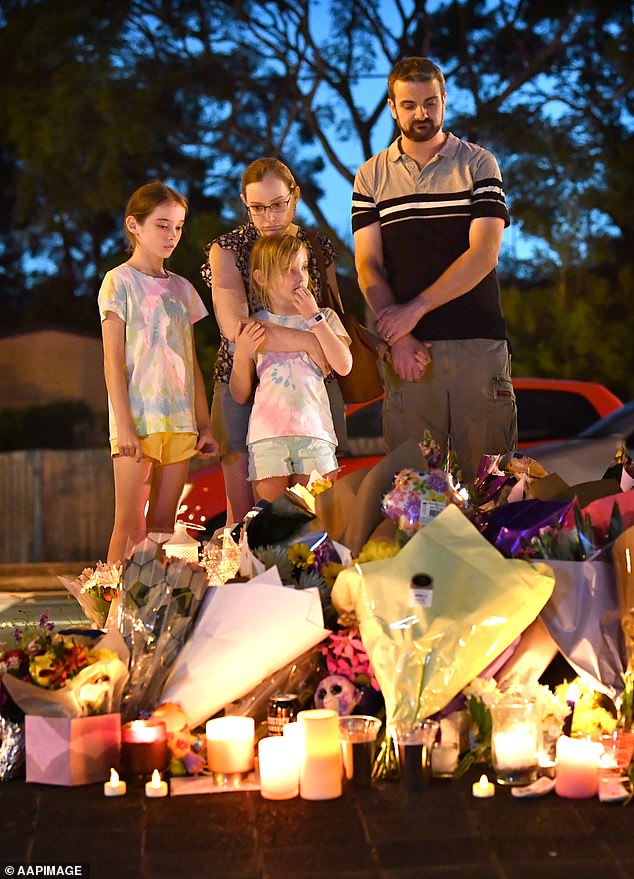 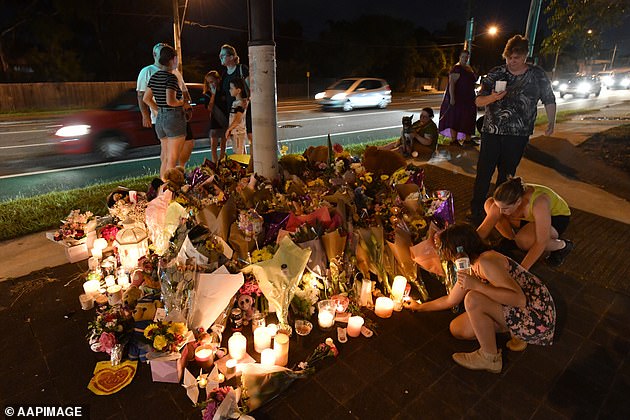 The tribute has grown throughout the day with loved ones and residents dropping off flowers, stuffed animals and candles 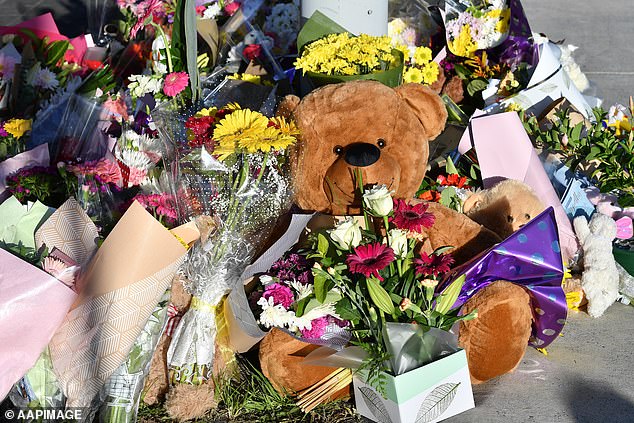 Flowers, teddy bears and letters were left at the intersection where a young couple were killed on Australia Day

‘I’d like to extend my thanks and support to the first responders and witnesses to this horrific accident who fought so hard to try and save their lives.

‘Some very small comfort to hear one of the couple’s dogs, Frankie, who had run off from the scene last night was found late this morning after the local community rallied together to help find her after a plea from Kate’s family.’

Ms Leadbetter, who was six months pregnant, is understood to have been working as an interior stylist while her partner worked in fabrications.

The young couple had recently shared a photo of their baby’s ultrasound as they stood proudly in front of a Christmas tree.

Queensland Police are now investigating the potential to lay more charges against the teenager over the death of Ms Leadbetter and Mr Field’s unborn baby. 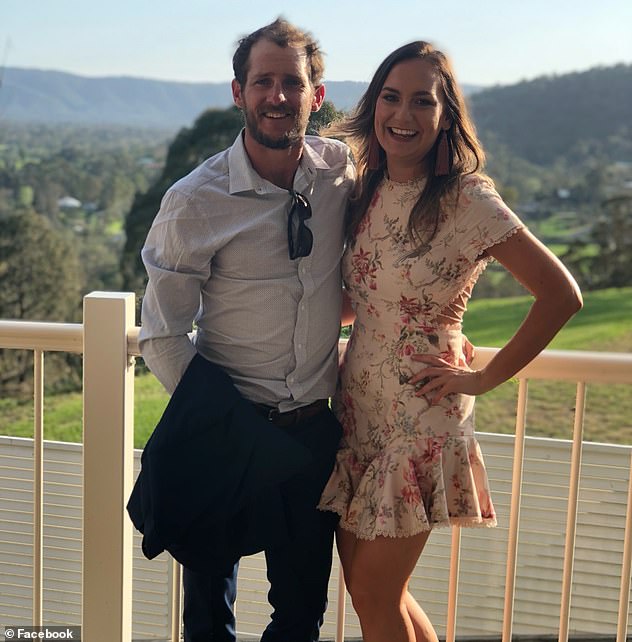 ‘Here’s two people going about their business innocently on Australia Day, walking their dogs, they should be entitled to do that,’ Queensland Police Assistant Commissioner Brian Codd said of the deaths of Mr Field and Ms Leadbetter 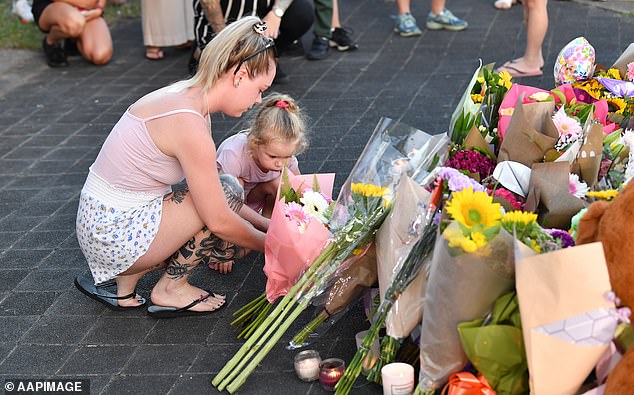 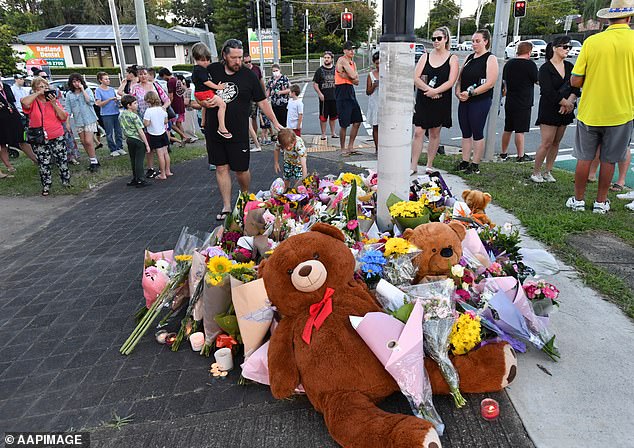 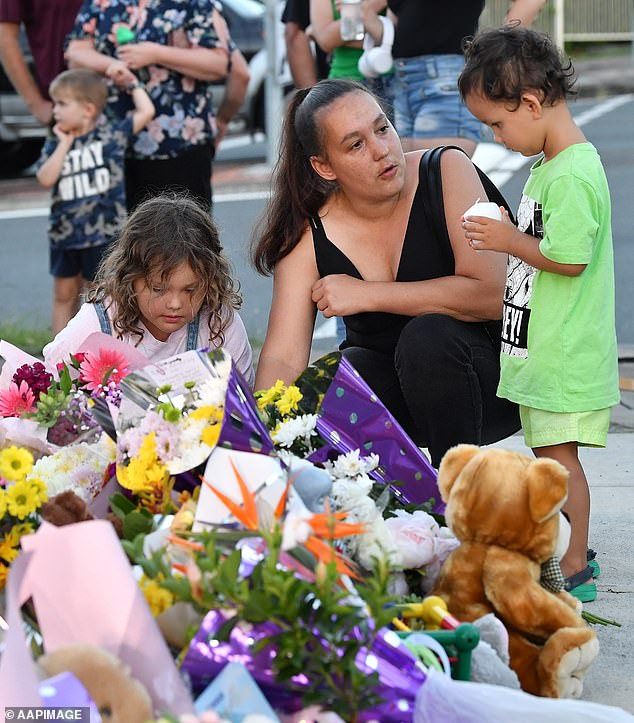 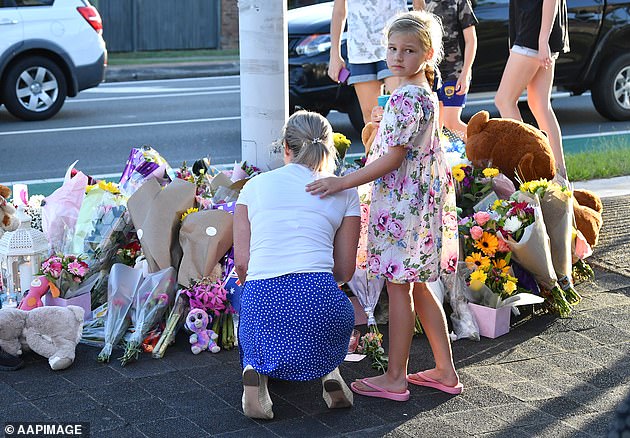 Families lay flowers and candles at the vigil on Wednesday night. The couple were due to become parents in just three months before they were killed

‘Here’s two people going about their business innocently on Australia Day, walking their dogs, they should be entitled to do that.

‘To have them ripped away from their families is an absolute tragedy, and I can assure you it’s impacted very heavily on the first responders and witnesses who faced that.’

The 17-year-old had allegedly been driving erratically through the intersection when he ploughed into a tow truck.

His car then began to roll and moments later collided with the couple walking their two dogs.

It is understood Ms Leadbetter and Mr Field never saw the car coming. 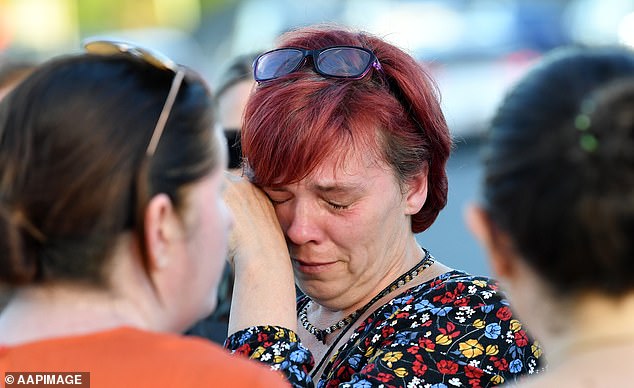 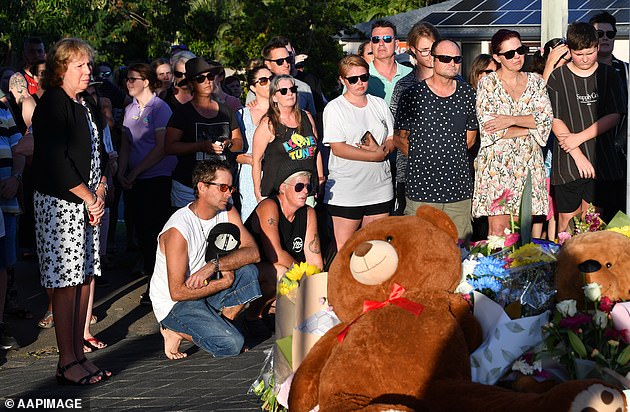 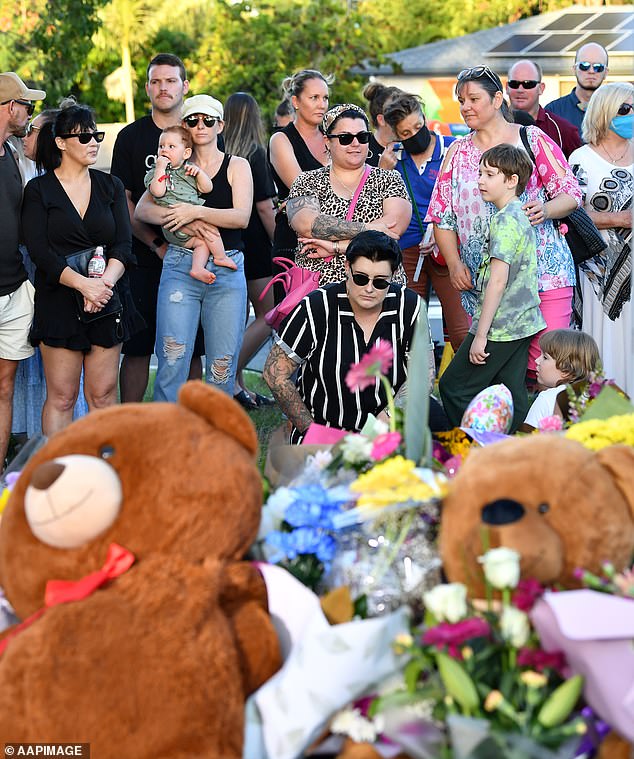 Mr Field was killed instantly while desperate attempts from passersby were made to save his girlfriend’s life.

The 17-year-old from Waterford West was due to front Brisbane Children’s Court on Wednesday but chose not to appear.

At a hearing in his absence he was remanded in custody. The teen is understood to have been on bail for 50 unrelated offences when the crash occurred.

Outside court the teen’s lawyer Patrick Horgan said it had been a ‘very traumatic experience for everyone involved’.

A GoFundMe page was initially set up to help cover the costs of medical treatment for the couple’s dog, Frankie.

But after a local vet decided against charging to assess the animal, the funds will now go towards funerals for Ms Leadbetter and Mr Field. 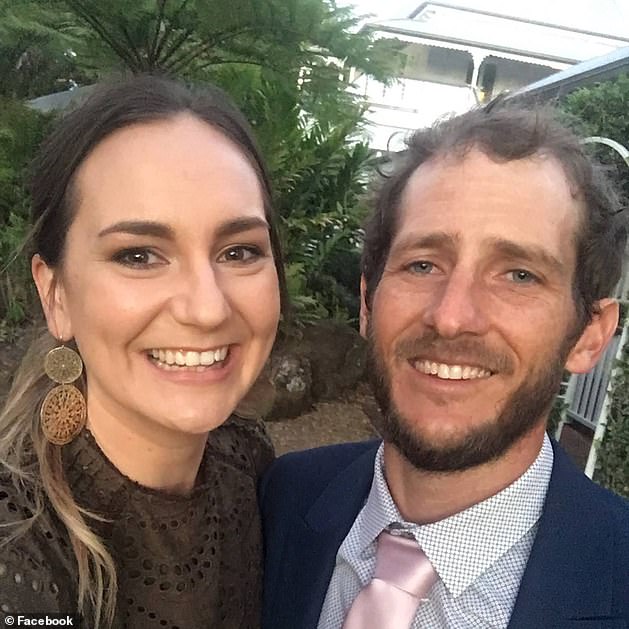