A discreet clue on the Queensland Health website has hinted Brisbane’s lockdown could extend to next Tuesday, while south of the border, Byron Bay’s Covid outbreak is threatening to explode out of control.

Another case of community transmission linked to one of two Brisbane clusters was reported in the northern NSW town on Wednesday, while several more venues were added to the list of exposure sites.

It prompted Bluesfest to be cancelled just 24 hours before the first act was due to perform. The eleventh hour decision has left thousands of attendees stranded in Byron Bay.

Greater Brisbane residents were ordered into a snap three-day lockdown on Monday afternoon, which was set to end on Thursday.

But a seemingly insignificant paragraph on the Queensland Health website appears to indicate the lockdown will last an extra five days. 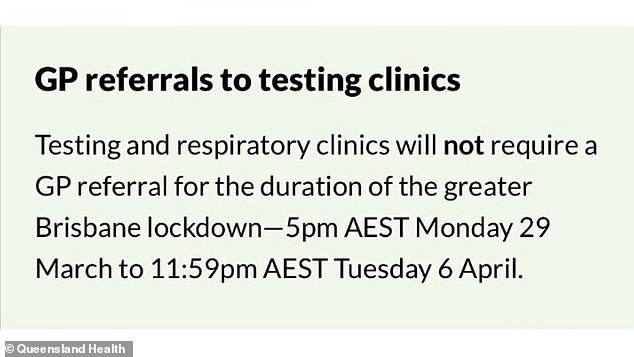 This paragraph on the Queensland Health website had been changed some time on Wednesday night, as it previously stated the lockdown period would end at on Thursday at 5pm 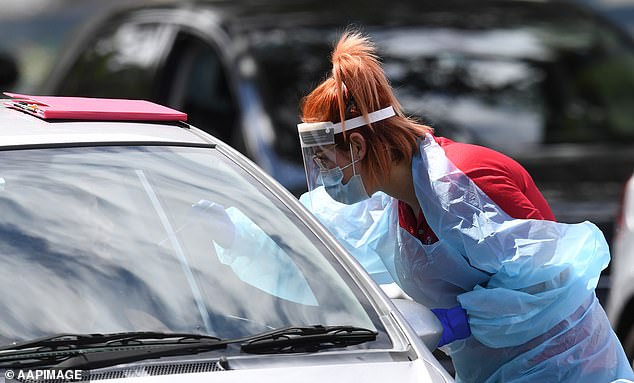 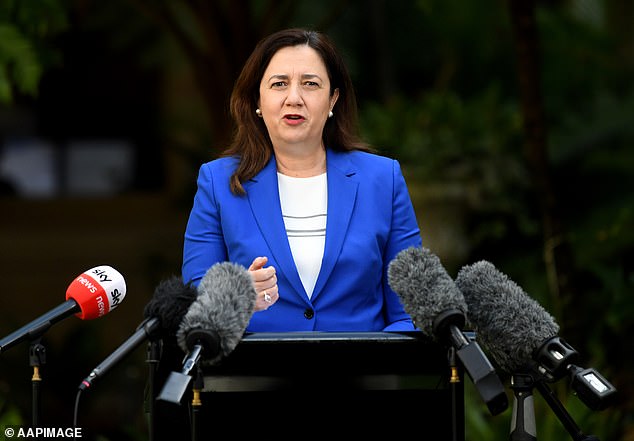 ‘Testing and respiratory clinics will not require a GP referral for the duration of the greater Brisbane lockdown- 5pm AEST Monday 29 March to 11:59pm AEST Tuesday 6 April,’ the website read.

The sentence had been changed some time on Wednesday night, as it previously correctly stated the lockdown period would end at on Thursday at 5pm.

‘It’s a balancing act between shutting things down to allow for contact tracing versus heading into a holiday weekend that most people want, and quite frankly need, right now,’ he told the Gold Coast Bulletin.

‘The reality is, the risk is quite high (of community transmission), but with a collective challenge to throw everything we can at it; by getting tested, wearing masks, staying home if you’re not well and social distancing, we may be okay.’

Fears of a prolonged lockdown come despite just two new coronavirus cases emerging in the community on Wednesday out of 33,408 tests.

The two new cases in Queensland take the total number of community infections to 17, along with two Covid patients who initially spread the virus to hospital workers. 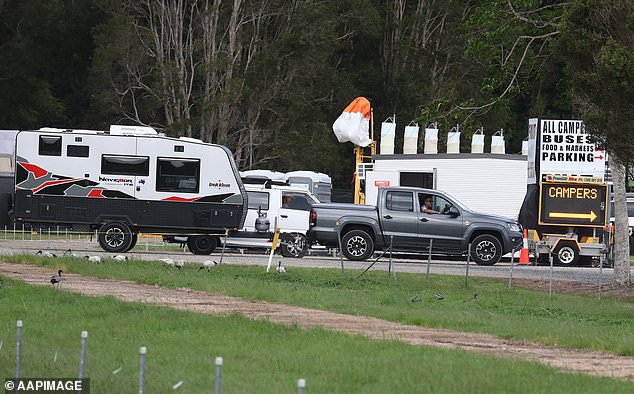 Bluesfest was cancelled just 24 hours before the first act was due to perform. The eleventh hour decision has left thousands of attendees stranded in Byron Bay 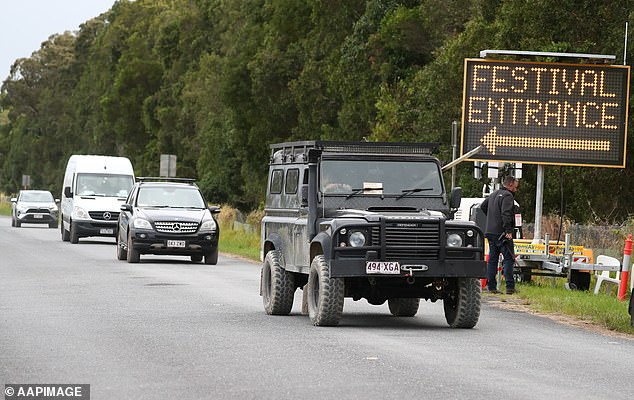 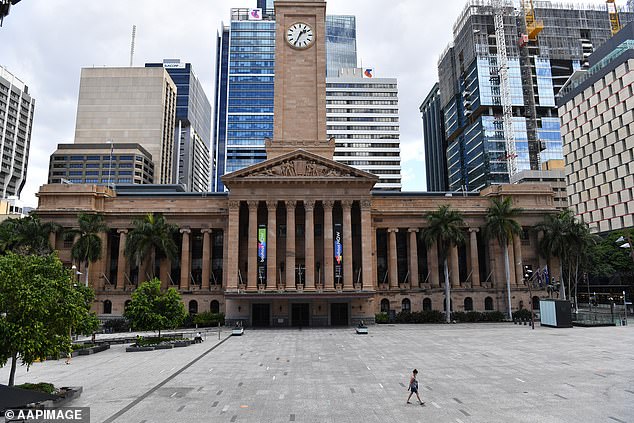 Greater Brisbane residents were ordered into a snap three-day lockdown on Monday afternoon, which was set to end on Thursday. Pictured: a lone woman is seen walking through a near deserted King George Square in Brisbane

Premier Annastacia Palaszczuk said a decision on extending the Greater Brisbane lockdown would be made at 9am on Thursday.

‘The fact we do not have any unlinked community transmission in the southeast or in our state is absolutely encouraging,’ she told reporters.

‘Fingers crossed all will be looking good for Easter.

‘If we see very good testing rates across Queensland and we don’t see any unlinked community transmission, the signs for Easter are looking positive.’

Most cases are now in Brisbane or regional hospitals, including on the Gold Coast, at Toowoomba, and Bundaberg.

Hamilton Hotel in Brisbane has been added to the high alert venues list after a Covid-infected patron visited the bar between 2.20pm and 5.20 pm on Tuesday.

Anyone at the pub at the same time is considered a close contact and must self-isolate for 14 days and get tested immediately.

Newstead Brewing on Doggett Street – one of Brisbane’s most popular bars – has been added to the state’s casual contact locations.

Anyone who visited TAFE in Southbank on Wednesday March 17 from 8am to 4.30pm is considered a casual contact and should get tested. 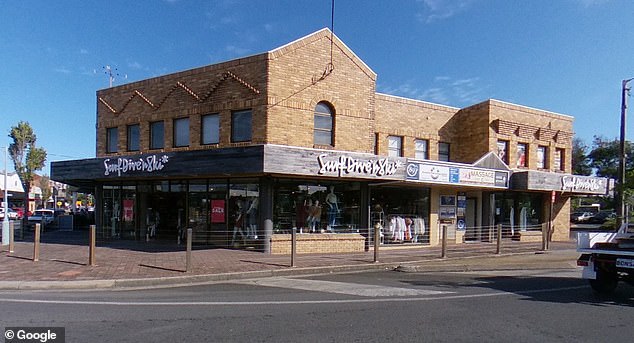 Surf, Dive and Ski in Byron Bay is considered a casual contact location. Customers who visited the store between 1.25pm to 1.30pm on Saturday, March 27 must get tested and self-isolate

More venues have also been put on a health alert in Byron Bay.

Anyone who visited Henry Rous Tavern in Ballina on Sunday, March 28 between 1.20pm and 2.20pm is advised to get tested immediately and self-isolate until receiving further advice.

Surf, Dive and Ski in Byron Bay is considered a casual contact location. Customers who visited the store between 1.25pm to 1.30pm on Saturday, March 27 must get tested and self-isolate.

A NSW man in his 20s returned a positive test to the virus on Tuesday, after unknowingly infectious travellers visited a number of venues in the Byron Bay region.

The man last Friday attended the same venue as a hen’s party linked to several COVID-19 cases in Queensland. 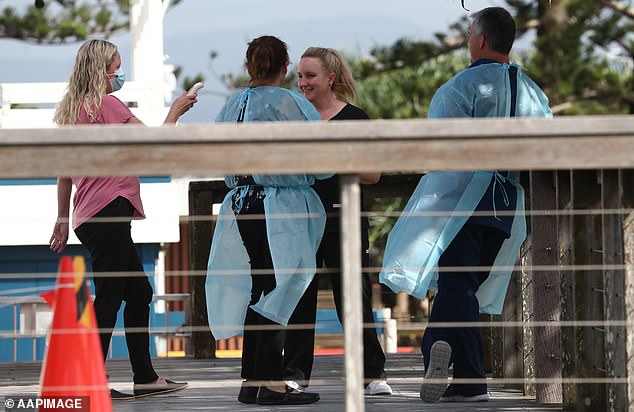 Byron Bay locals are on high alert after a man aged in his 20s tested positive. Pictured  are medical staff have their temperature checked outside the Byron Surf club in Byron Bay on Wednesday

Until at least Tuesday, gatherings will be limited to 30, the ‘four square metre’ rule reintroduced, and masks mandated in some settings.

The premier also urged residents living in the area not to head elsewhere for the Easter break.

‘It is our very strong preference that if you live in any of those four local government areas, that you don’t travel outside those areas,’ Ms Berejiklian told reporters on Wednesday.

‘We won’t be policing that but it is very strong advice … if there is community transmission, we don’t want it seeded to other parts of NSW.

‘Given it’s the Easter weekend, there’s a lot of movement … we don’t want a super-spreading event like the northern beaches which then resulted in us having to go further.’

There were no plans to close the NSW-Queensland border nor plans to tighten the ‘proportionate’ restrictions further, Ms Berejiklian told reporters.

The premier also said the government would not yet discourage NSW holiday-goers from visiting Byron Bay.

The COVID-positive man’s household contacts have tested negative and the man has been in self-isolation since Monday. 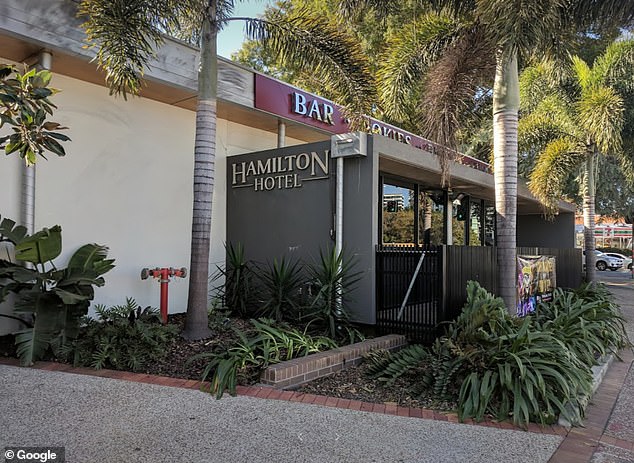 Hamilton Hotel has been added to the list of high alert venues after a Covid-infected patron visited the bar between 2.20pm and 5.20 pm on Tuesday 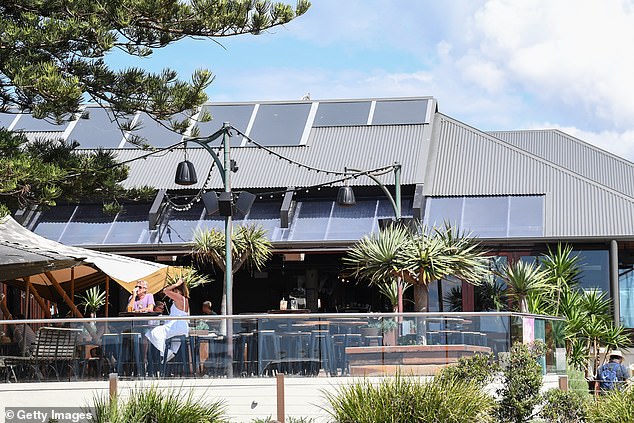 The latest NSW case attended the Byron Beach Hotel (pictured) last Friday night, where the man aged in his 20s was sitting within close proximity to an infected hen’s party from Queensland

Bluesfest, a music festival set to draw thousands of revellers to Byron Bay, was cancelled on Wednesday.

NSW Health Minister Brad Hazzard signed a public health order cancelling the festival less than 24 hours before it was due to begin.

He said the festival had been cancelled due to the risk festival-goers – some of whom travel from interstate – would spread the highly infectious COVID-19 variant across the country.

‘While the cancellation of Bluesfest is disappointing for music lovers and the local community, I hope that ticket holders would support Bluesfest and hold on to their tickets as I understand Bluesfest will be working on a new date as soon as possible,’ Mr Hazzard said.

Thousands of disappointed attendees were seen driving out of the festival’s camp site at Byron Events Farm on Wednesday afternoon following the snap decision.

TAFE in Southbank on Wednesday March 17 from 8am-4.30pm

Woolworths in Everton Park on Wednesday March 17 from 1.39pm-2.13pm

Basil and Vine in Burpengary on Thursday March 18 from 10am-10.15am

The Standard Market Company, Gasworks Plaza, in Newstead on Friday March 19 from 6.35pm-6.45pm

Public Toilet at Gasworks Plaza in Newstead on Friday March 19 from 6.46pm-6.47pm

The Bavarian Eagle Street Pier in Brisbane City on Saturday March 20 from 2.15pm-4pm

Riverland Brisbane in Brisbane City on Saturday March 20 from 4.10pm-6.32pm

Viscosity in Fortitude Valley on Saturday March 20 from 6.42pm-7.31pm

Mokha Café – Patrons who sat in the laneway (Feros Arcade)

The Farm Byron Bay in Ewingsdale