Britain is being hit with a last blast of wintry weather today – but the skies will clear in time for Britons to enjoy a pint outside when pubs and restaurants reopen tomorrow.

The Met Office had snow and ice warnings in place for parts of Manchester and Yorkshire this morning with  up to 5cm of snow was possible on high ground as temperature dropped below zero.

The cold spell, coming in from the North Sea, will loosen its grip tomorrow although temperatures are set to remain close to 0C in London and at a bone-chilling -4C in Edinburgh.

The freak weather has caused chaos in the North West with a number of crashes reported, including one car that skidded off the motorway in Chorley.

In Lancashire, road police urged people to avoid the A56 after it was partially closed ‘due to heavy snow and numerous stranded vehicles’ on the carriageway.

But the light snowfall on the North East coast did not deter runners and dog walkers who were seen out and about at Whitley Bay and Seaton Sluice.

There are no weather warnings in place for Monday, which will be ‘a cold day with bright weather for most’, with average UK temperatures of between 5C and 10C.

The chilly forecast could stall the reopening of Britain’s pub gardens with revellers set to shiver on benches as restrictions limit boozers to outdoor areas. 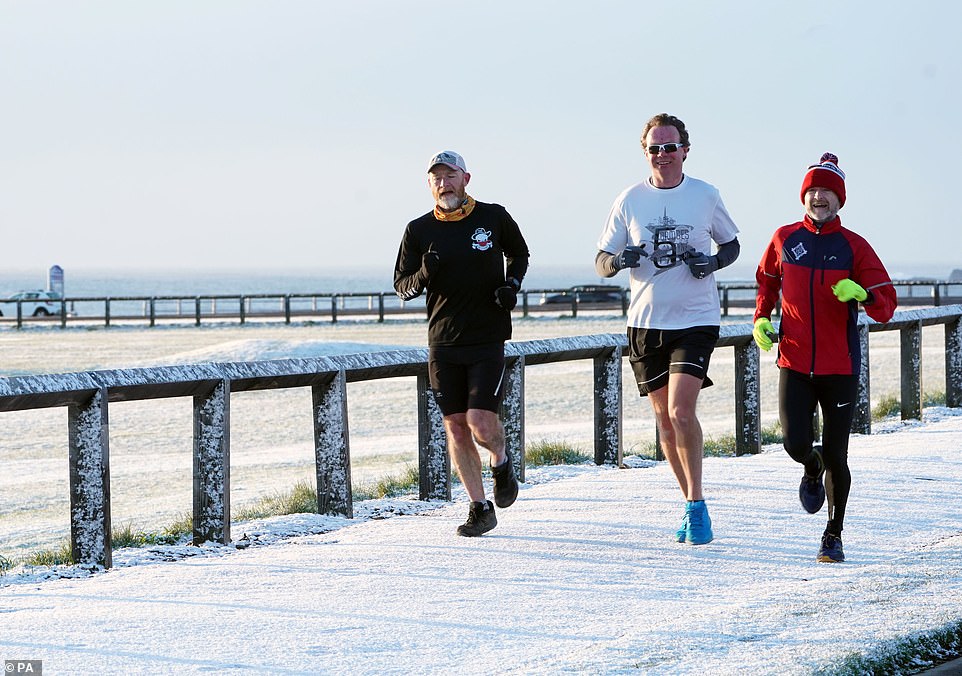 Britain is being hit with a last blast of wintry weather today – but the skies will clear in time for Britons to enjoy a pint outside when pubs and restaurants reopen tomorrow. Pictured: Runners out today in Whitley Bay on the North East coast 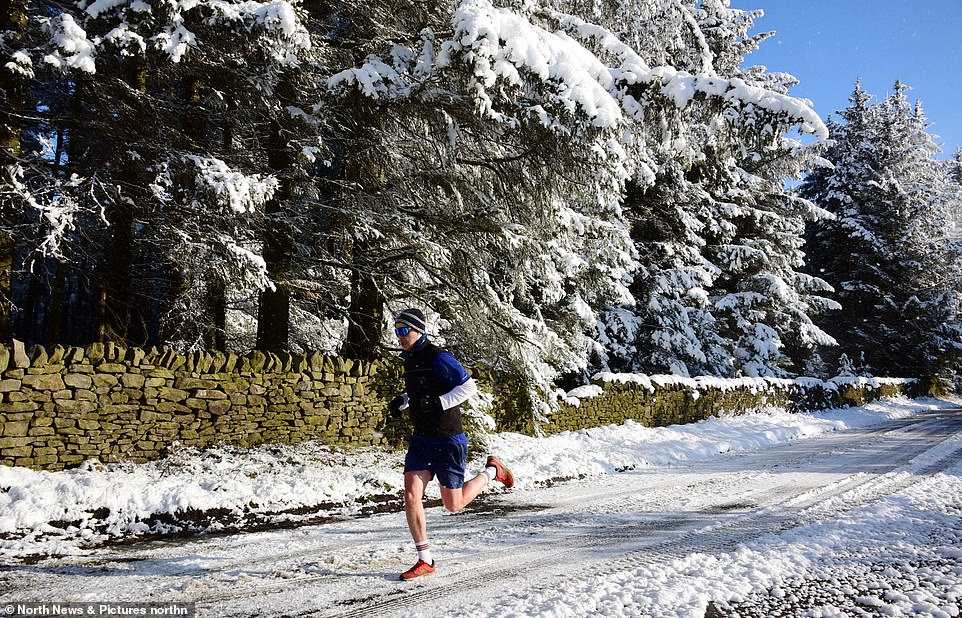 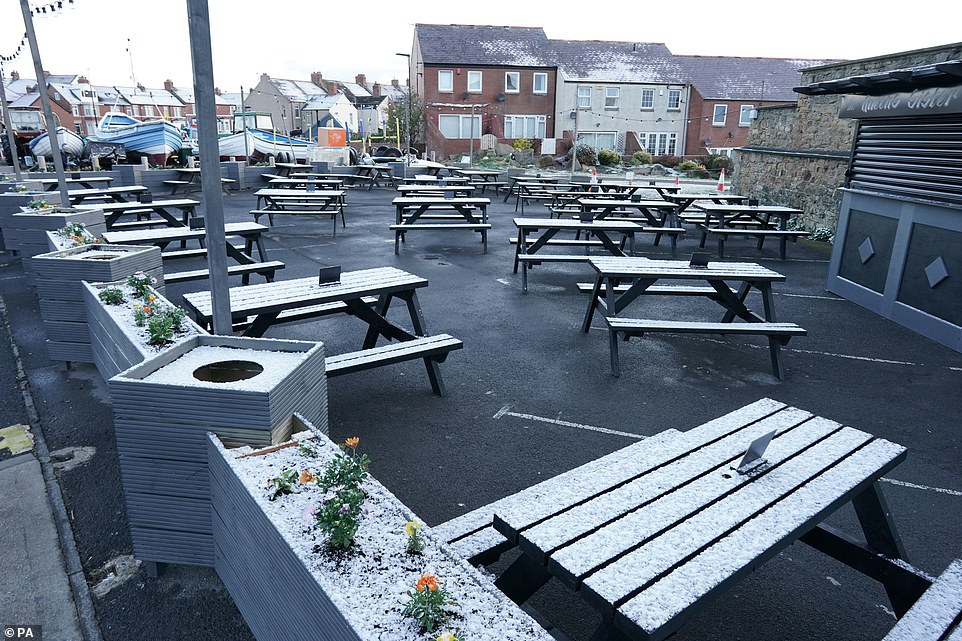 The chilly forecast could stall the reopening of Britain’s pub gardens with revellers set to shiver on benches as restrictions limit boozers to outdoor areas. Pictured: Queens Head in Cullercoats, on the North East coast 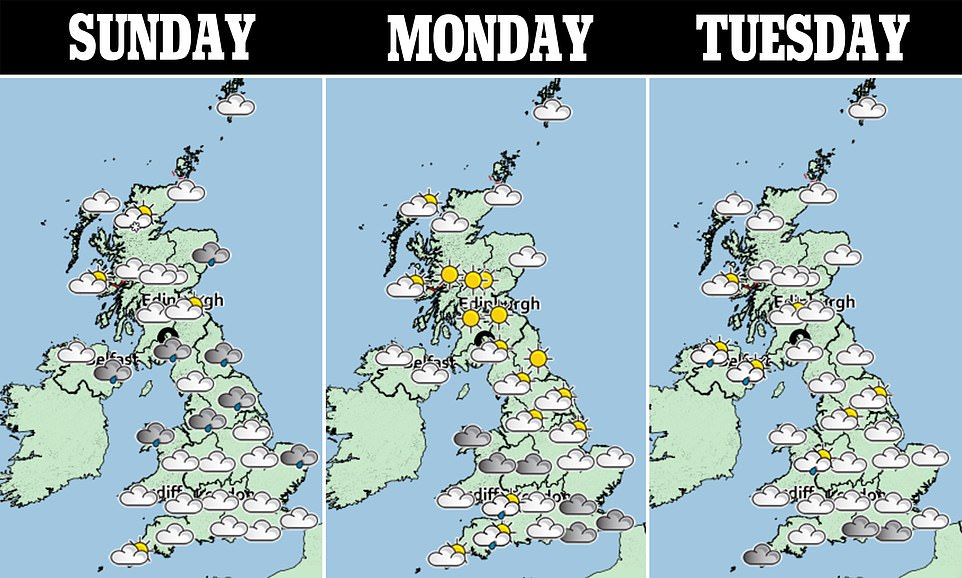 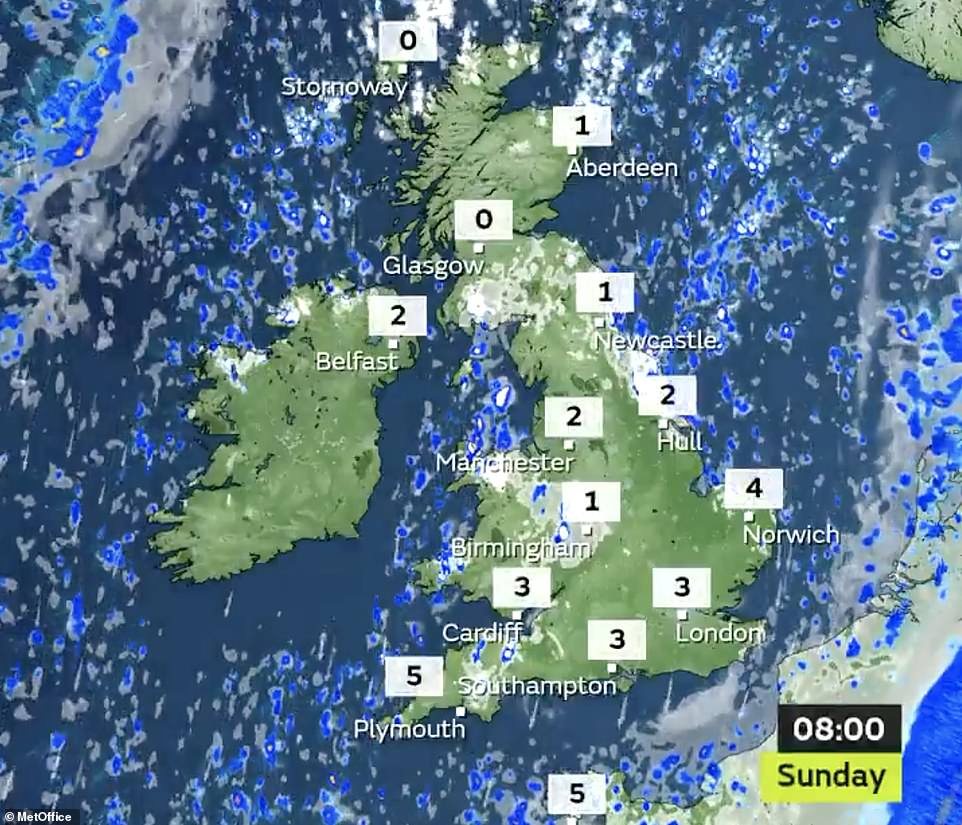 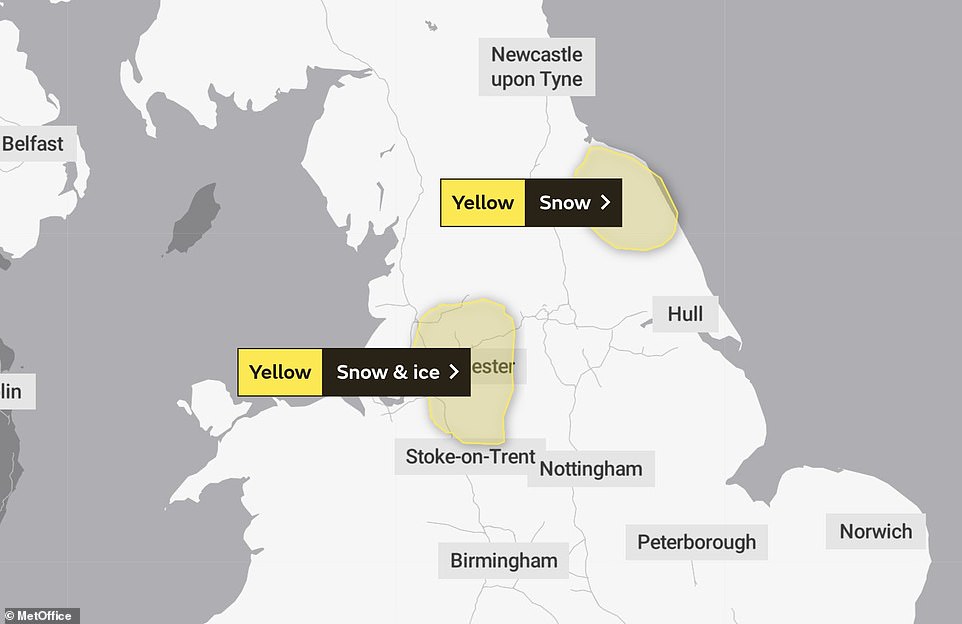 The Met Office had snow and ice warnings in place for parts of Manchester and Yorkshire this morning, with police forced to close one dual carriageway due to the harsh conditions

Met Office spokeswoman Nicola Maxey said: ‘By the time we get to Monday, April 12, it’s certainly looking fine, dry and cold in the south.

‘The further north you go, the colder it is and there’s a risk of showery rain for the west side of Scotland and for Cumbria.

‘There’s a chance that some of that rain could fall as snow in the high ground in Scotland.

‘There’s also a chance of frost on Monday and Tuesday morning, following cold nights, with most places likely to see temperatures just touching above freezing.’ 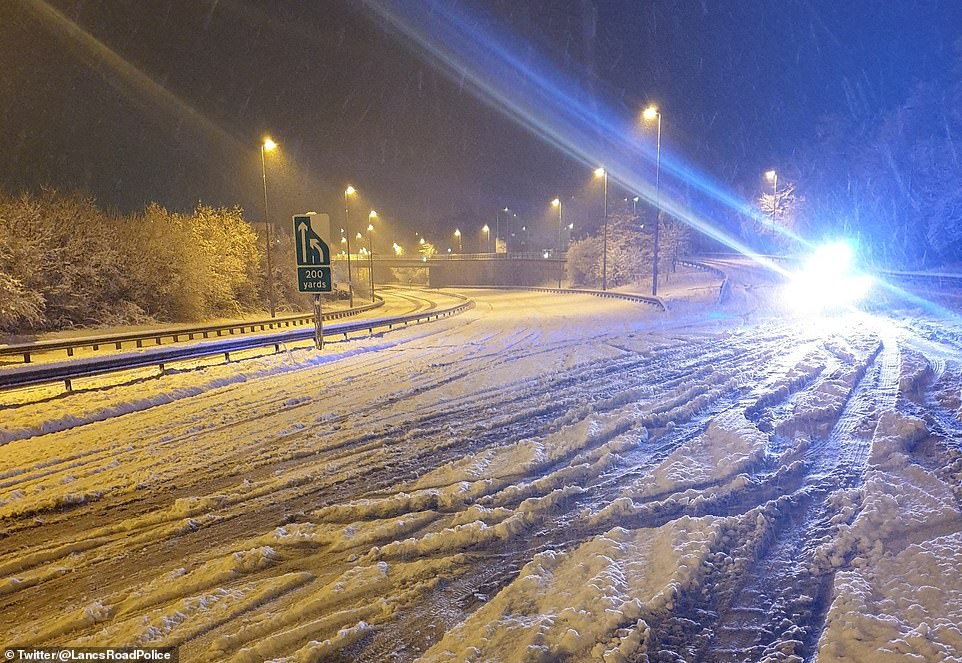 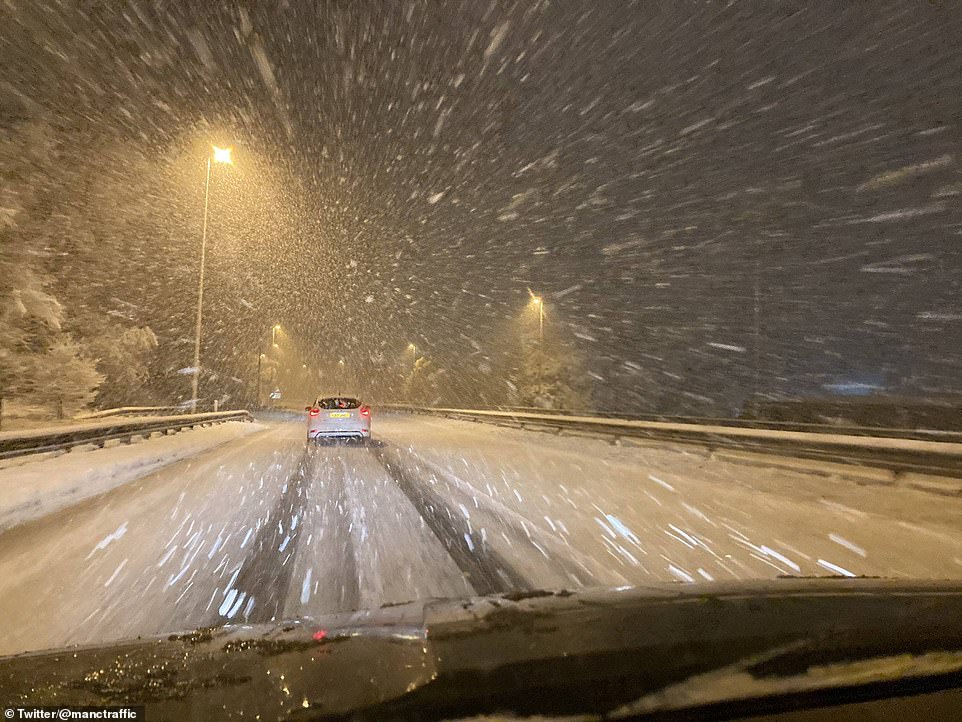 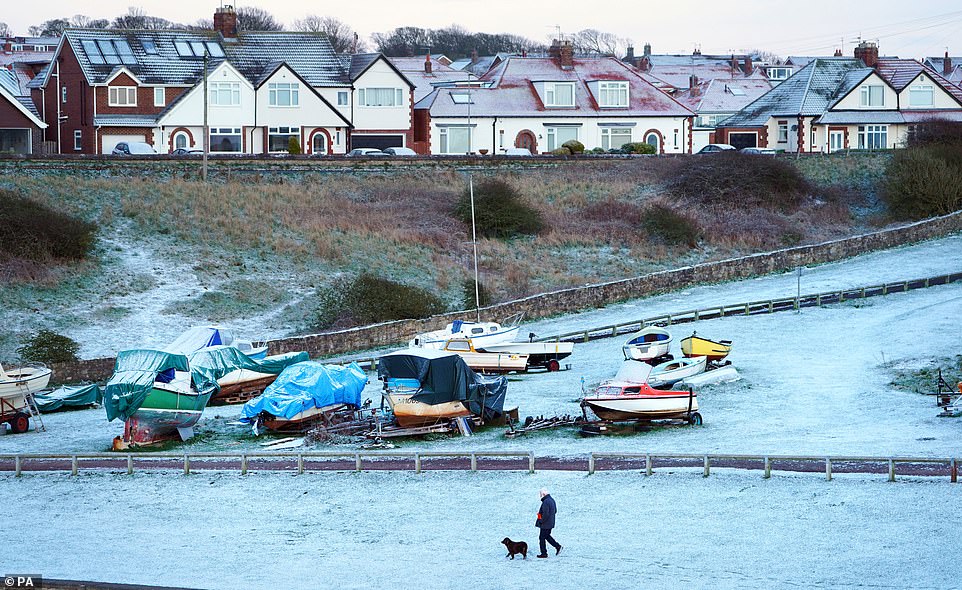 It will then be mostly cloudy but dry on Wednesday with spells of rain across Scotland and Northern Ireland which may be heavy.

Ahead of the great reopening, several councils across the country, including Westminster and Newcastle, have shut off roads and allocated pavement space to help restaurants and cafes accommodate demand with extra seating.

Beer gardens are expected to be at full capacity, with major pub chains including Fuller’s and Mitchells & Butlers saying they have seen ‘significant interest’ in regulars returning.

Pubgoers have been advised to run up tabs so they can avoid multiple trips indoors to pay for food and drink.

Official advice to businesses says the tab system will ‘ensure that customers do not need to make multiple indoor payments during their time at the venue’.

The Department for Business said reports and rumours on social media there would be a ban on taking payment indoors, potentially forcing people to pay with cash outside, were incorrect.

A spokesman said: ‘If payment is not possible outdoors, payment can be taken indoors as a last resort. This is to ensure we limit the use of indoor space and protect people by stopping the spread of the disease.’

Indoor dining and drinking will remain forbidden until May 17. Monday also marks a return for indoor leisure, including gyms and swimming pools, for the first time in more than three months.

And those who want to get away from it all altogether will be allowed to travel domestically with their households on a ‘staycation’.

Last week holiday home rental company Cottages.com said that two-thirds of its properties in coastal locations or with hot tubs have been booked for the week beginning April 12.

Theme parks also reopen on Monday. The number of guests allowed at weddings will increase to 15, and funerals will be allowed to take place with up to 30 people.

Care home residents will be allowed two visitors, driving tests will resume and non-essential journeys between England and Wales will also be allowed again.