Like Peter Finch’s deranged newsreader in the 1976 movie Network, Shelley Tasker is mad as hell and isn’t going to take it any more.

As England was pitchforked into another debilitating lockdown, she set up an amplifier on the steps of Truro Cathedral, grabbed a microphone and began telling passers-by what’s ‘really going on’ in the NHS. Within minutes she had attracted a small crowd.

Shelley has resigned in disgust from her job as a healthcare assistant at Treliske hospital and wants the world to know why.

The idea that the NHS is overrun, she said, is a pack of lies. ‘I can tell you now that at the height of the pandemic I had no work because there were no patients.

She also claimed that patients who died from flu were being registered dishonestly as Covid victims on death certificates. 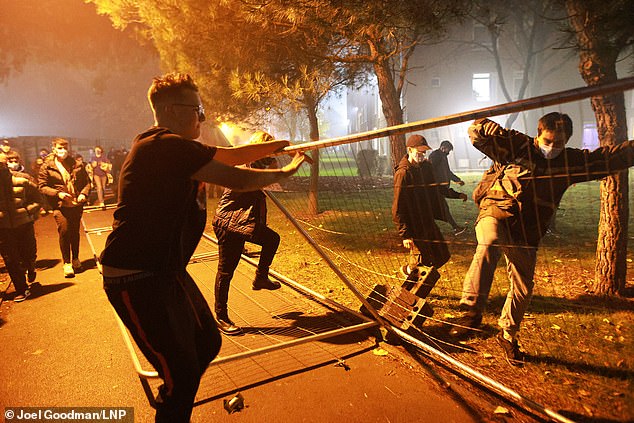 Pictured: Students protest where The University of Manchester have erected fencing around student accommodation blocks at their Owens Park campus on the first day of a national coronavirus lockdown in England

Some may dismiss her tirade as the rantings of a woman driven to distraction by the pandemic. Then again, haven’t we all gone slightly bonkers over the past eight months? Her figures may be purely anecdotal, but she doesn’t appear to be that far wide of the mark.

Yesterday the chief executive of the Royal Cornwall Hospitals Trust confirmed that in the county’s main hospital there are just seven patients suffering from coronavirus, three of them in intensive care.

Yet on the strength of that minuscule number of cases, a county of 565,000 people is being shut down. Businesses are again closing their doors and many will never reopen. Cornwall, like the rest of the country, is braced for a jobs bloodbath.

Lockdown enthusiasts in London may dismiss Cornwall as a faraway county of which we know little, hardly representative of the nation as a whole.

But even in London infection rates were tumbling before the decision to plunge England back into suspended animation.

The picture is much the same in many parts of the country. Several towns and cities in the North and Midlands recorded a significant fall in Covid cases in the last week of October, suggesting that precautions already in place were working. The infection rate has declined in five out of seven English regions.

Yet the lockdown zealots got their way — thanks to a fraudulent set of projections from ‘the science’.

Frankly, I’d rather believe the word of a care assistant like Shelley Tasker than the horror stories peddled by Government advisers Chris Whitty and Patrick Vallance — The Two Ronnies of Doom. The graphs they presented on Halloween, and used to bounce Boris Johnson into ordering another lockdown, were wildly exaggerated and have subsequently been revised downwards, under cover of darkness.

Or, as Shelley Tasker, would say: ‘All lies.’

This news should come as no surprise to anyone. The Two Ronnies have been trying to scare us to death since the beginning with their blood-curdling ‘projections’ and ‘models’. Their figures are designed to bamboozle and engender a climate of fear.

They talk about an explosion of ‘cases’ without explaining exactly what that means.

Thousands of patients are recorded as dying ‘with Covid’ — not from — on the strength of testing positive at some time within the previous 28 days.

It has also been revealed previously that ‘with Covid’ could even apply to someone who has been knocked down by a bus.

What we do know is that the average age of those dying ‘with Covid’ is 82.5 — a year older than the average life expectancy. Most of them have other serious underlying conditions which would have killed them sooner or later, anyway.

It’s a fact, not a ‘projection’, that 99.5 per cent of people who contract coronavirus recover from it. Many don’t even display symptoms.

Yet The Two Ronnies and their dupes in government continue to pretend we are all in mortal danger. Even the official UK Statistics Authority has confirmed we have been deliberately misled.

‘The use of data has not consistently been supported by transparent information being provided in a timely manner. As a result there is potential to confuse the public and undermine confidence.’ 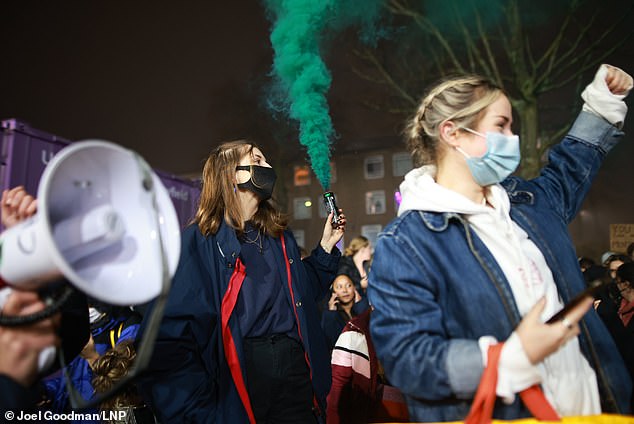 In Greater Manchester, Chief Constable Ian Hopkins is appealing for people to grass up their neighbours if they suspect they are having friends of family over during lockdown, RICHARD LITTLEJOHN writes

And for this, the Government is shutting down the country yet again, a desperate move which will destroy countless businesses and cost hundreds of thousands of jobs. Back in the summer, I warned you that once the politicians and jobsworths were allowed to impose new post-lockdown restrictions, they would go on a berserk power grab.

They have proven true to form. Even though we have now entered Lockdown Lite, with schools, colleges and shops selling ‘essential items’ allowed to remain open, we have unleashed a Kafkaesque world of madness.

First, there was the Tier system, under which virtually no one properly understood what they could and couldn’t do.

Now we’ve begun a month-long ‘circuit-breaker’ or whatever euphemism they’ve chosen to call it today.

The list of what’s allowed and what isn’t is a catalogue of sheer insanity.

You can buy a pint to take away using an app on your mobile phone, but can’t drink it inside or immediately outside a pub.

Marks & Sparks can sell you a prawn sandwich, but not a pair of socks. Knickers are ‘non-essential’ on the High Street, but freely available on the internet.

You couldn’t make it up.

We are all being urged to exercise and keep fit to boost our immune systems and fight Covid. But gyms and swimming pools are closed, by law.

Needless to say, the rules are being enforced with Stalinist zeal by the Boys in Blue.

Police forces which constantly plead poverty and can’t be bothered to patrol the streets or respond to burglaries appear to have no trouble summoning up the Heavy Mob at the drop of a helmet to confront Covid transgressors.

In Suffolk, the police toured golf courses checking that no one was teeing off. Essex Police sent 13 coppers — yes, thirteen — to close down a gym in Harlow.

When the owner refused to co-operate, she was arrested and faces a fine of £10,000.

In Greater Manchester, Chief Constable Ian Hopkins is appealing for people to grass up their neighbours if they suspect they are having friends of family over during lockdown.

This sinister abuse of power is reminiscent of life in Stasi-controlled Communist East Germany, portrayed chillingly in the movie The Lives Of Others.

This is how freedom dies. 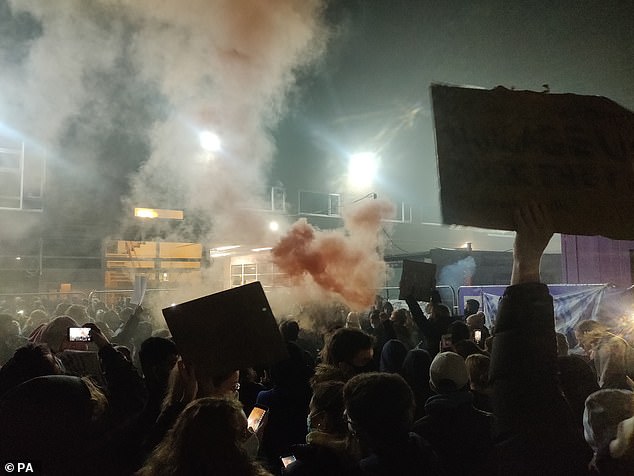 At Manchester University, students ripped down fences erected overnight to corral them on campus. Good for them. In London, the Tube was busy yesterday, as tens of thousands of people headed to work, while it lasts

Encouragingly, however, it would appear that this time many of us are refusing to submit meekly to these ludicrous, illiberal restraints on our liberty.

Across the country, all manner of shopkeepers have vowed to remain open, even if they are deemed to be selling non-essential items. Gym owners, too, are defying the ban, like the lady in Harlow, despite being threatened with seriously disproportionate penalties.

At Manchester University, students ripped down fences erected overnight to corral them on campus. Good for them. In London, the Tube was busy yesterday, as tens of thousands of people headed to work, while it lasts.

Chancellor Rishi Sunak has extended the furlough scheme to March. My suspicion is that this is motivated as much by bribing people to stay at home and observe the lockdown as supporting business and employment.

All he’s doing is postponing the inevitable. We’re well on our way to four million unemployed, far more than in the darkest days of the 1980s.

Rishi can’t go on borrowing and printing money indefinitely. There will be a day of reckoning.

Worst of all, by caving in cravenly to ‘the science’, Boris has betrayed the trust invested in him last December and broken the social contract which should exist between the Government and the governed.

From the start of this pandemic, British business and the British people played their part. We stuck to the rules, changed our behaviour, observed social distancing and wore masks, despite the conflicting evidence.

As three weeks of lockdown turned into three months, we toughed it out on the promise that we could beat Covid and life would return to normal.

When lockdown was lifted, businesses moved heaven and earth to become Covid-compliant at great detriment to their bottom line.

Shops introduced one-way systems, hand gels, plastic screens and limited the number of customers they could cater for at any one time. Hairdressers and beauty salons removed chairs and adopted masks, gowns and visors.

It all hit their profits, but at least they were back in the game. 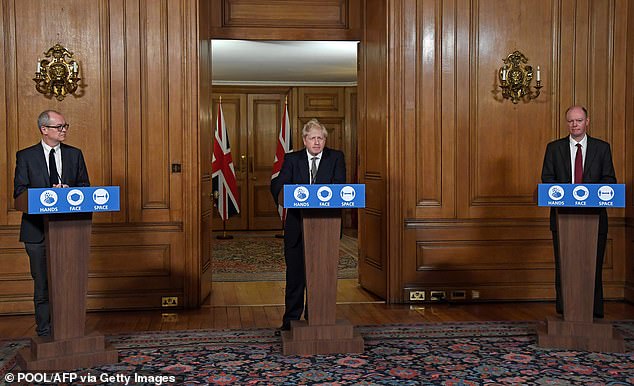 Littlejohn: Frankly, I’d rather believe the word of a care assistant like Shelley Tasker than the horror stories peddled by Government advisers Chris Whitty and Patrick Vallance — The Two Ronnies of Doom

The hospitality industry alone spent a staggering £900 million on adapting pubs and restaurants to make them safe.

Now, just as things were returning to some semblence of normality — and after we were all encouraged to Eat Out To Help Out — the Government has gone back into full Corporal Jones mode and pulled the plug again.

The High Street is on life support. This week, Sainsbury’s and John Lewis announced thousands more redundancies. Stores are closing for good.

Some self-employed folk and directors of small companies have been abandoned to their fate by a supposedly pro-business Conservative Government.

Despite the much-heralded furlough scheme, hundreds of thousands of people have had no income since March and have no prospect of earning a penny in the near future.

On a human level, families are being torn apart, separated by glass screens from elderly relatives in care homes and told that grown-up children are forbidden from visiting their parents’ homes, or they can expect a dawn raid from the Old Bill.

There’s a mental health epidemic and suicides are rising in record numbers. And disgracefully, because of the monomaniacal obsession with Covid, patients with other life-threatening illnesses, such as cancer and heart disease, are being condemned to premature and avoidable deaths.

Figures out yesterday showed that more than 3.5 million over-50s have had scheduled operations cancelled by Our Amazing NHS.

We’re told that lockdown is necessary to stop hospitals becoming overwhelmed. But they’ve had eight months to ensure that doesn’t happen.

Increasingly, it looks as if policy is driven not by the need to ‘protect the NHS’ but to protect ministers and their advisers from accusations at the inevitable public inquiry that they didn’t do enough to save lives.

With Chancellor Sunak extending furlough until the spring, it doesn’t feel as if this will all be over by Christmas.

And for every Shelley Tasker howling at the moon in Truro, there are millions of us seething away quietly at the institutionalised ineptitude of this Government’s imposition of yet another ruinous lockdown.

We’re mad as hell and, pretty soon, we’re not going to take it any more.

Frank Lampard: Thiago Silva is one of the 'top centre backs' in the world after five clean sheets