By Glen Owen and Stephen Adams for The Mail on Sunday

Britain has again outflanked the EU to secure a huge priority order of vaccines – this time from a French manufacturer, The Mail on Sunday can reveal.

Brussels chiefs are still furious at AstraZeneca for promising the UK first deliveries of its vaccine supplies and remain engaged in a bitter legal battle with the Anglo-Swedish firm, claiming it has reneged on its deal with the bloc.

The dispute appears to have prompted another vaccine maker, France’s Valneva, to make it clear to Eurocrats that its contract will put the UK at the head of the queue for their jabs too. 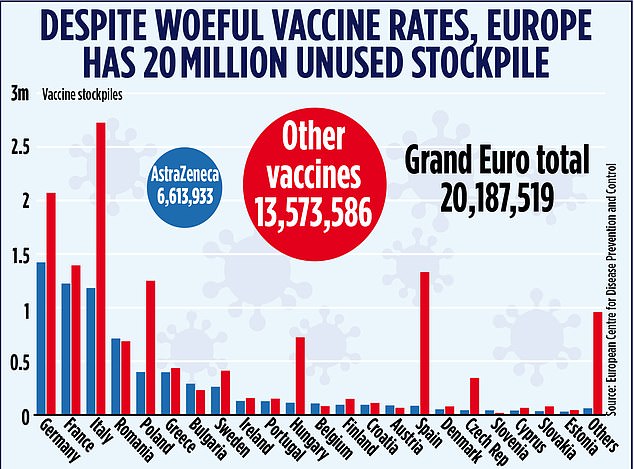 Europe’s vaccination rollout is in danger of being over-reliant on the Pfizer-BioNTech jab, the ambassadorial meeting notes also reveal

An initial British deal for 60 million Valneva doses was struck last September, with the order raised to 100 million at the start of February. By contrast, the EU was still in ‘advanced discussions’ about buying 60 million doses in January

The clash clears the way for the UK to start receiving its 100 million shots of the two-dose vaccine – which is made in West Lothian, Scotland – later this year.

Details of the row between Valneva, based in Nantes in western France, and Brussels are laid bare in official notes of an internal meeting of EU ambassadors, seen by this newspaper.

The minutes state that the deal proposed by Valneva ‘so far remains below expectations for [EU] Member States’, in part because the firm’s contract is ‘explicitly giving priority to the UK over the EU’.

The European Commission has also received ‘no commitment from the company on delivery schedules’, the ambassadors complained.

Both matters – prioritising the UK and delivery schedules – have been bones of contention between EU leaders and AstraZeneca.

European officials have repeatedly accused AstraZeneca of breaching the terms of its contract with the bloc by supplying Britain first – even though the UK contract was signed first.

‘Our contract trumps theirs,’ the Health Secretary quipped in March.

Similarly, Valneva signed agreements to supply the UK with vaccine supplies months ago, but has not yet put pen to paper with the EU.

An initial British deal for 60 million Valneva doses was struck last September, with the order raised to 100 million at the start of February. By contrast, the EU was still in ‘advanced discussions’ about buying 60 million doses in January.

Signs of the rift emerged last Tuesday when Valneva said it would be discussing deals ‘on a country by country basis’ and was ‘consequently de-prioritising centralised discussions with the European Commission’.

Two days later, in what appeared to be an attempt at saving face, the Commission said Valneva had ‘not, at this stage, succeeded to meet’ contractual conditions demanded by Europe.

‘When companies want their vaccines to be integrated in our vaccines portfolio, a certain set of conditions has to be respected,’ a spokesman said.

Europe’s vaccination rollout is in danger of being over-reliant on the Pfizer-BioNTech jab, the ambassadorial meeting notes also reveal. ‘Several member states cautioned against the risks of relying too much on Pfizer-BioNTech and called to develop a broad portfolio of vaccines,’ they say.

EU states have now administered 120 million vaccine doses, according to the European Centre for Disease Prevention and Control, of which 83.8 million – more than two-thirds – have been Pfizer.