Britain will be hotter than Portugal as the country gets set to bask in a mini-heatwave this weekend with temperatures soaring as high as 82.4F (28C).

And a spell of high pressure means most areas will meet the weather service’s definition of a heatwave – defined as three days above a particular temperature threshold.

The sun is set to stick around for the rest of the month, with only north-western parts due a little wind and rain towards the end of next week.

The mercury soared above 70F (21C) for the 13th day in a row yesterday, continuing a remarkable turnaround that follows a miserable few months including the UK’s fourth wettest May on record and the coldest April since 1922.

It follows British tourists scrambling to leave the Algarve in Portugal last night to beat the ‘amber list’ deadline, while Boris Johnson faces mounting pressure from some scientists to delay the lockdown easing on June 21 amid the rapid spread of the Indian ‘Delta’ variant.

Health Secretary Matt Hancock has pledged that freedoms would be restored ‘soon’, but stressed it was ‘too early’ to assess if the end of lockdown – also known as ‘Freedom Day’ – will go ahead as planned in 12 days’ time. 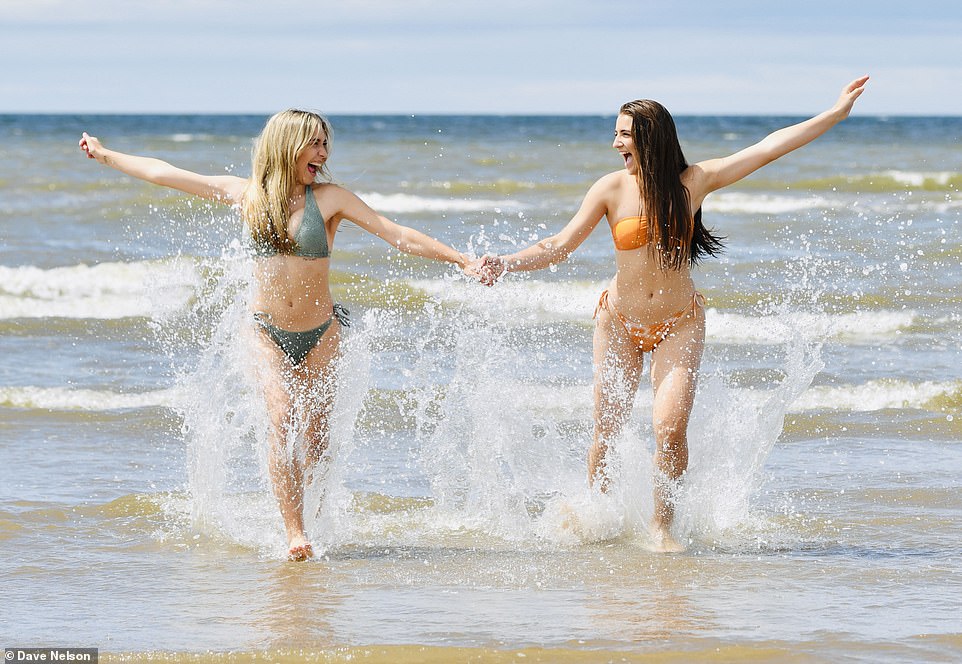 Dancers Estela Romero, 18, and Anastasia Krokidi, 19, from Blackpool, enjoy the sunshine at a beach in the seaside town of Lytham St Annes, Lancashire, this morning 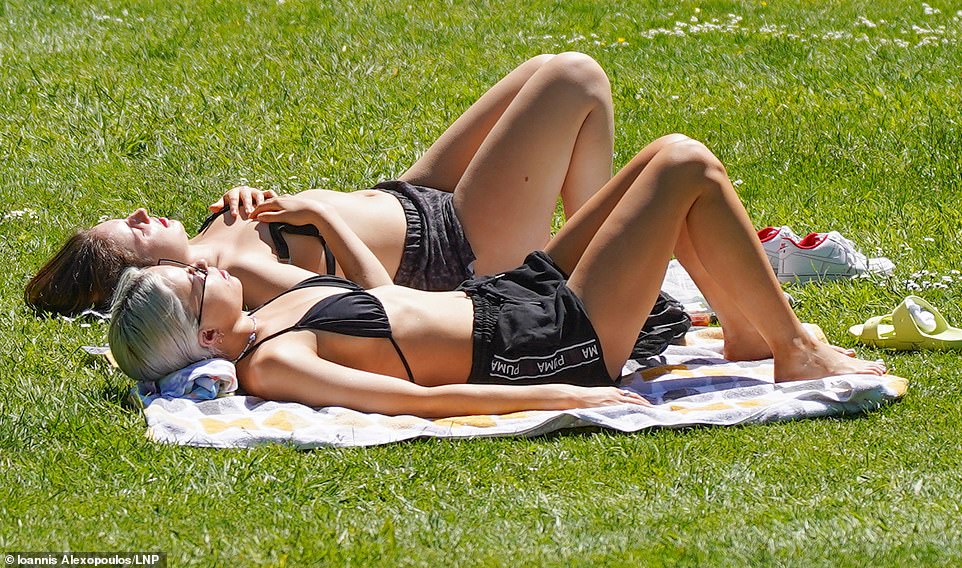 Members of the public enjoy the sunshine in the botanical gardens in Sheffield this afternoon. A spell of high pressure means most areas will meet the Met Office’s definition of a heatwave 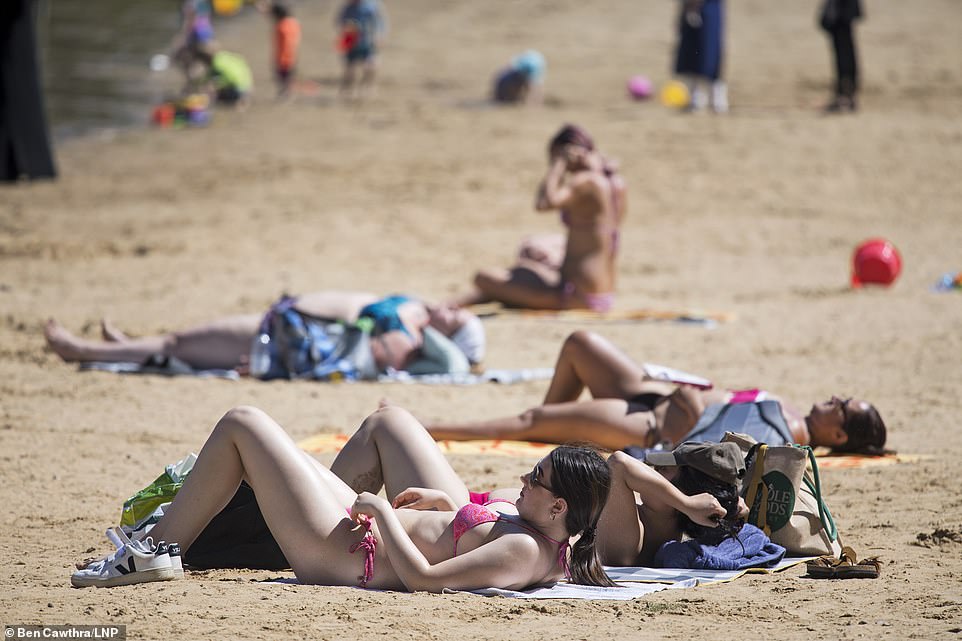 Britons relax in the hot weather at Ruislip Lido in Ruislip, north west London, on what is expected to be one of the hottest days of the year so far 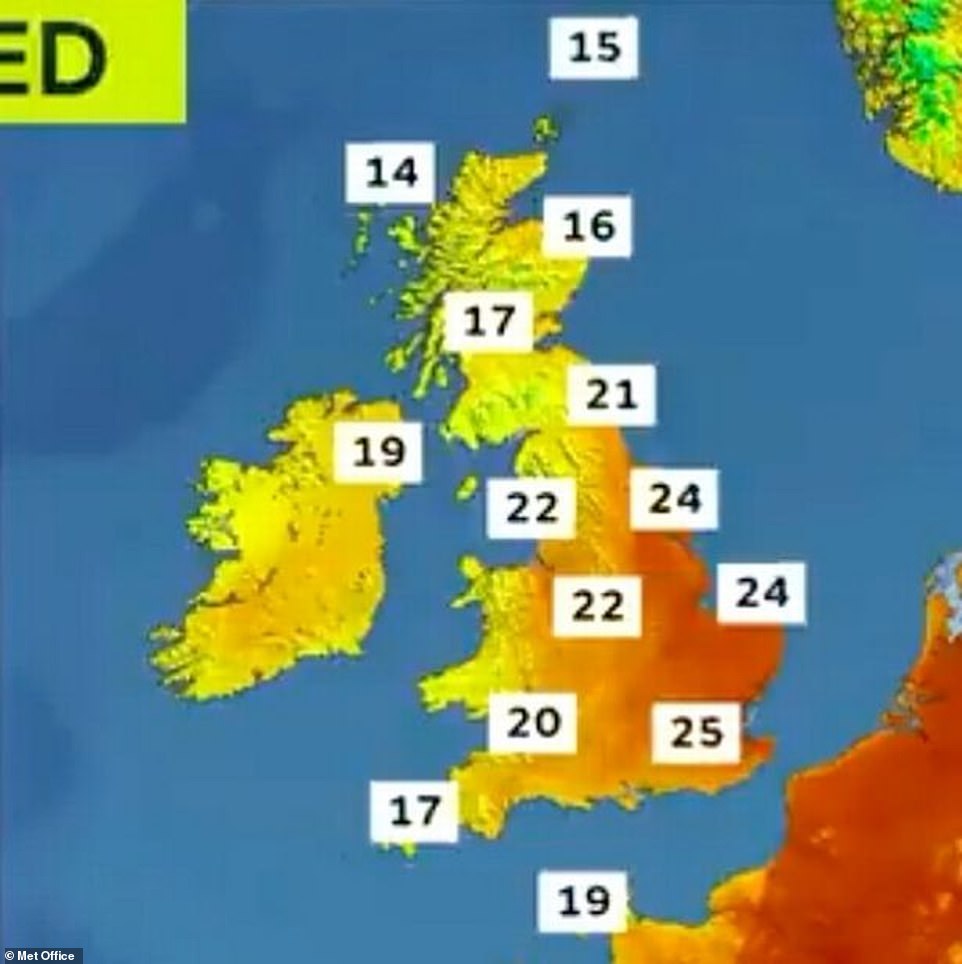 The Met Office’s weather forecast for Britain this weekend, pictured above. The mercury soared above 70F (21C) for the 13th day in a row yesterday, continuing a remarkable turnaround 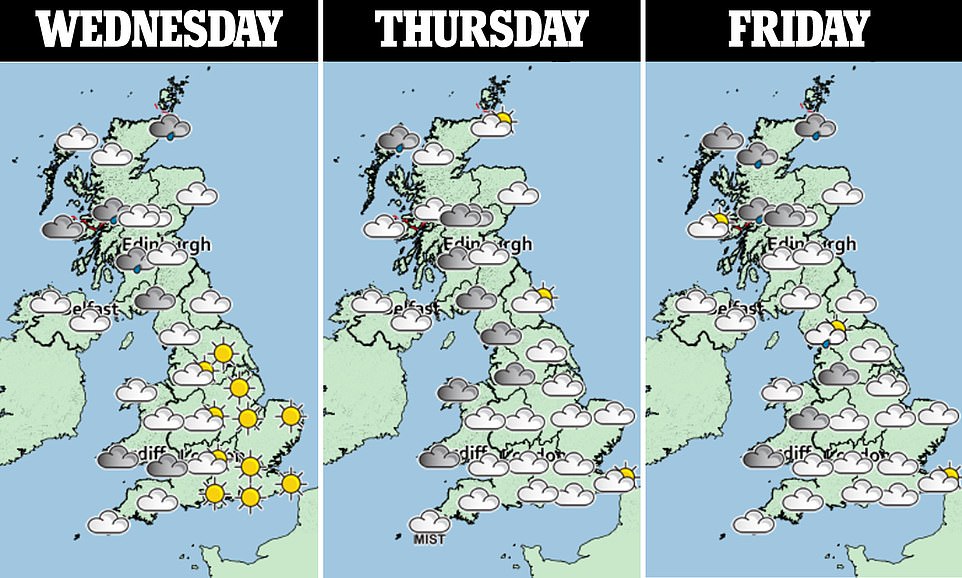 Temperatures on Friday, Saturday and Sunday are predicted to see highs around 77F (25C), with Sunday lined up to be the warmest day of the weekend for England, Scotland and Wales, according to the Met Office.

‘Friday will be largely fine and dry for much of the country,’ Mr Dixon said.

Maximum temperatures in Britain soared above 70F (21C) for the 13th day in a row yesterday. Here are the UK highs for the previous 12 days, including the hottest day of the year so far which was recorded last week:

‘There is a band of cloud and light patchy rain in the far north-west of Scotland, and there’ll be some showers affecting parts of the west as well.

‘There’s also clouds in the south (of England), however temperatures will remain above average for this time of year and there will be long, warm sunny spells for central and south-east areas in particular.

‘You’re looking at temperatures of mid-20Cs across the country but in London it could be 80.6F (27C) on Friday.’

Mr Dixon said Saturday, when Wales will play against Switzerland in the delayed Euro 2020 tournament, may see showers in the north of England overnight which will clear before the daytime, while low cloud and patchy fog could appear in the south and western parts of England.

‘There will be long sunny periods for most, but there’s a chance some rain could reach the extreme north-west in the day,’ he added.

‘Temperatures will remain above average for this time of year with highs across England generally in mid-20Cs and 80.6F (27C) in London.’

Sunday, the day which will see England take on Croatia, is predicted to be a ‘fine, dry day for most’, Mr Dixon said, with it predicted to be the warmest day of the weekend.

The Met Office’s Oli Claydon explained: ‘There’s a definition of what a heatwave is – it is at least three consecutive days of maximum temperatures meeting or exceeding a temperature threshold.

‘In Northern Ireland, Scotland, Wales, Devon and Cornwall and the north east its 77F (25C) – so it is a sliding scale depending on where you are, but we haven’t yet met that maximum threshold.’

The mercury could even tip 86F (30C) in parts of the South East by the beginning of next week.

Mr Claydon continued: ‘But by the beginning of the weekend and going into next week we might start to meet that criteria, by Sunday we might see 82.4F (28C) or 84.2F (29C).

Very #warm and humid conditions will develop across much of the country as we approach the weekend and it will feel quite hot in parts of the south 📈. But can we call it a heatwave? 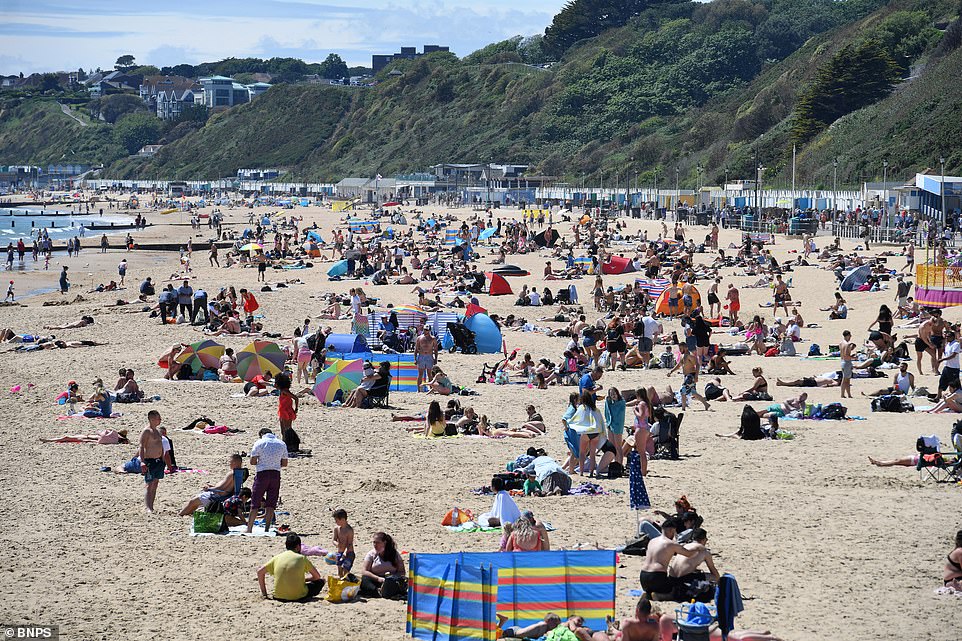 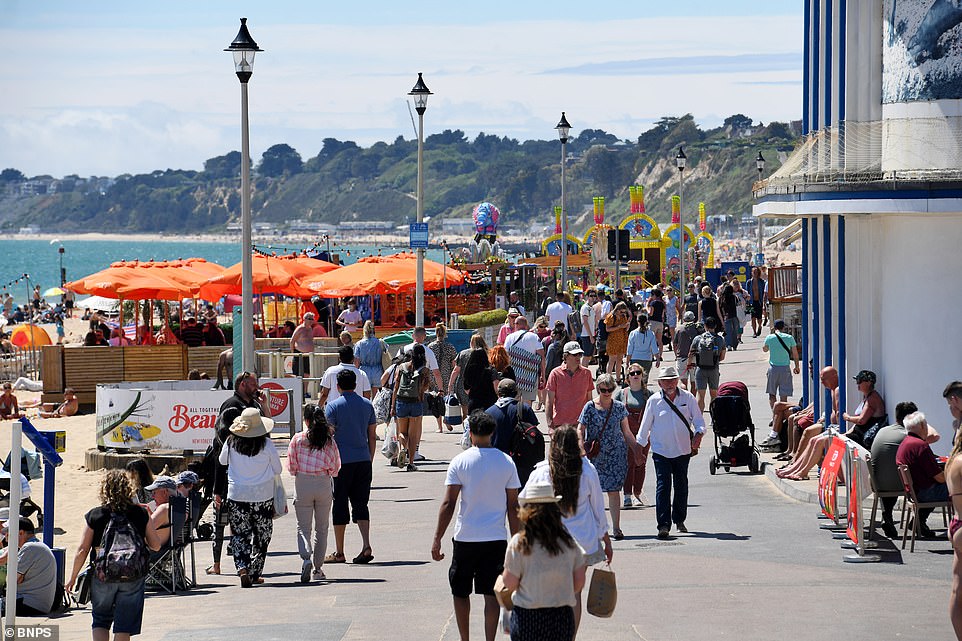 Sunseekers pictured on Bournemouth beach today as they enjoyed the bright sunshine. Met Office spokesman Stephen Dixon said this weekend, which will see the kick-off for Euro 2020, is on course to be the warmest weekend of the year so far 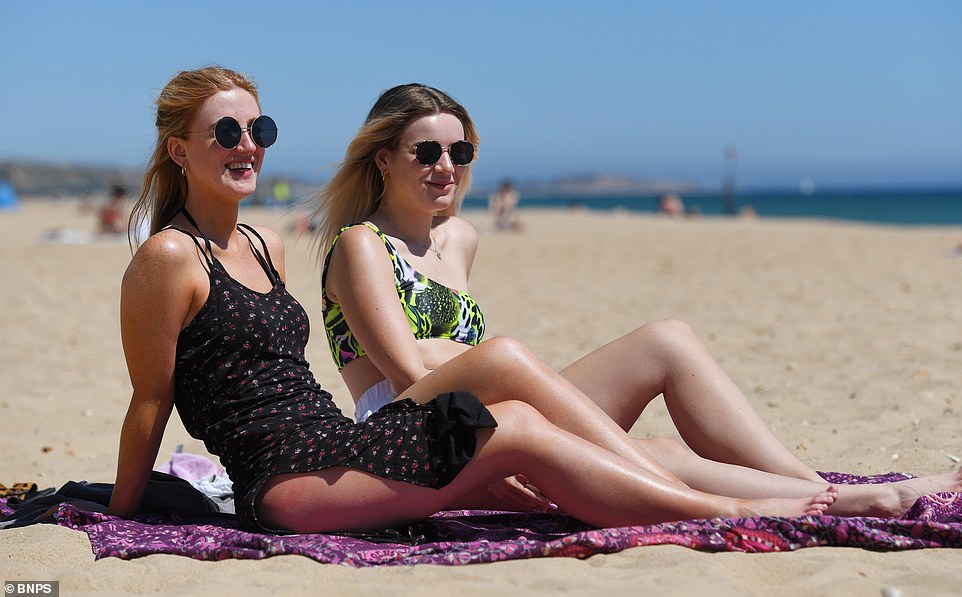 Gemma Moorey (left), 22, and Maria Coombes, 21, enjoy the sands and sunshine on Bournemouth beach this afternoon 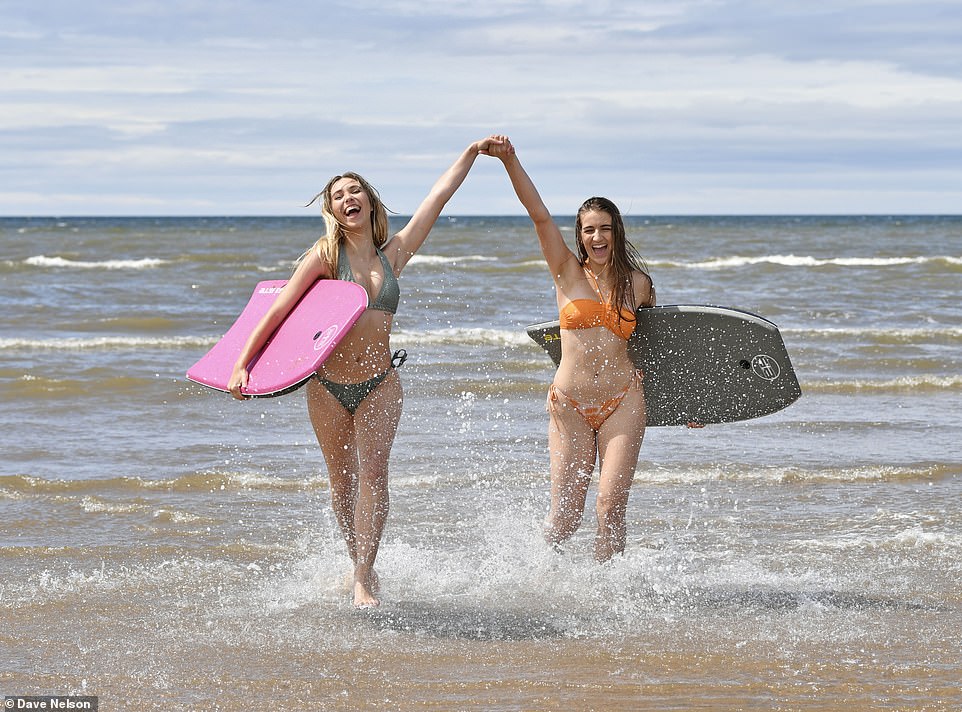 Estela and Anastasia from Blackpool enjoy the beach in Lancashire. Bookmaker Coral has made it odds-on at 1-2 for this month to finish as the hottest June on record in the UK 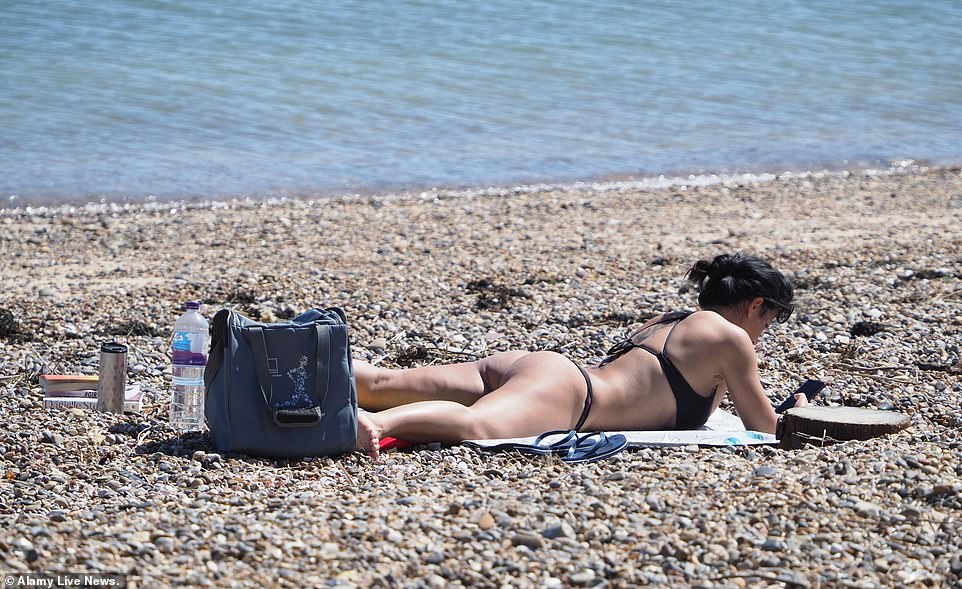 A sunbather pictured in Minster on Sea, Kent, this morning. The weekend is set to be a scorcher with the mercury potentially tipping 86F (30C) in parts of the South East by the beginning of next week 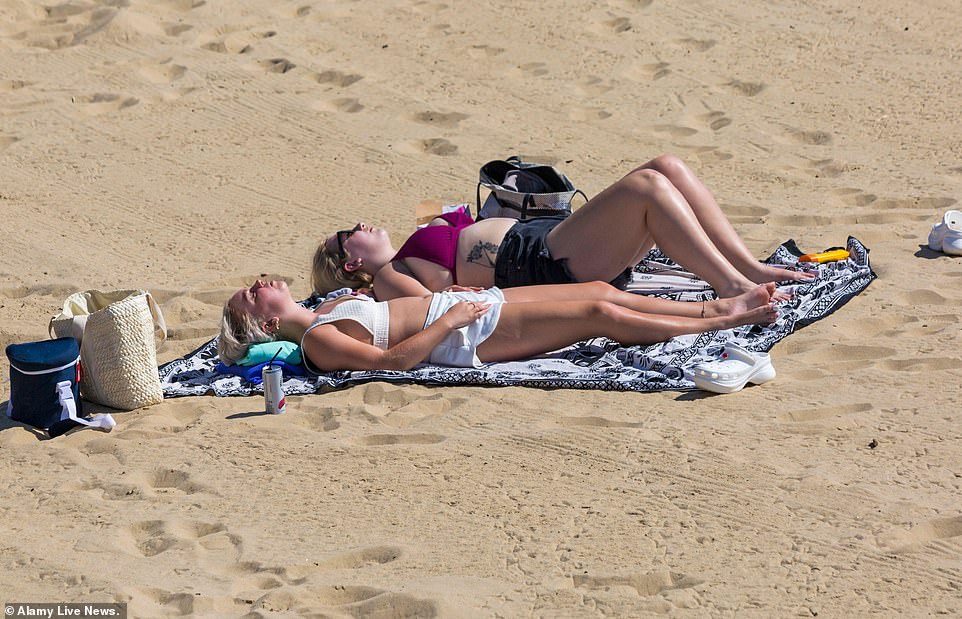 Sunseekers head to the seaside to enjoy the scorching temperatures in Bournemouth, Dorset, this morning

Mr Claydon continued: ‘As well as the 82.4F/84.2F (28C/29C) expected in London and the south east, elsewhere in places like Nottingham will potentially be meeting the heat wave criteria with 80.6F (27C) forecast.

‘Various other places set to meet the heatwave threshold as well.’ He added: ‘There’s a chance we might get towards 86F (30C) at the beginning of next week.’

If you cannot get out and about this weekend, it looks like there will still be plenty of time to work on your tan, with at least a few more weeks of sunshine on the way, according to Met Office data.

‘The theme of high pressure is expected to continue throughout June, although we might see incursions of unsettled weather in the north-western parts of the UK including some wet and windy weather in Scotland,’ Mr Claydon said.

‘The broad theme is that the high pressure will bring more settled conditions across the UK.’ The weather might turn at the start of July, but there is nothing concrete on the cards, Mr Claydon said. 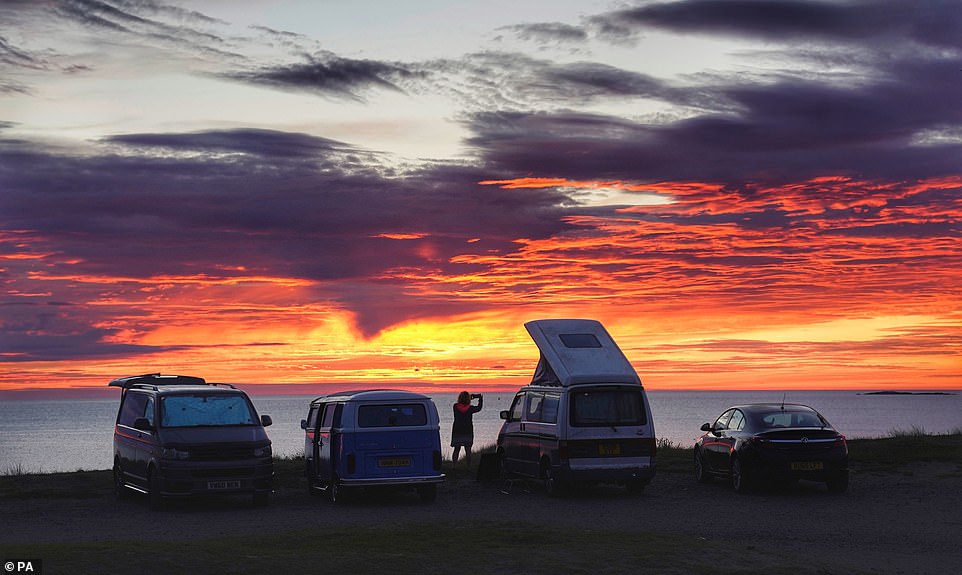 The sunrise at Bamburgh beach in Northumberland early today. The weather might turn at the start of July, but there is nothing concrete on the cards, Oli Claydon said 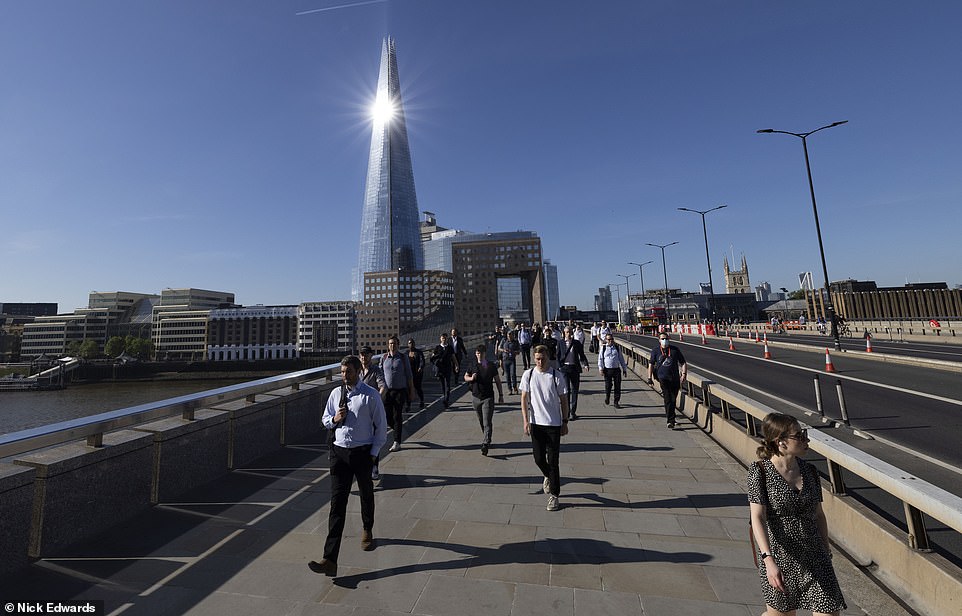 Commuters cross London Bridge in the sunshine this morning as the glare bounces off the Shard building. Mr Claydon said: ‘It is above 82.4F (28C) for London and a large chunk of the south east’ 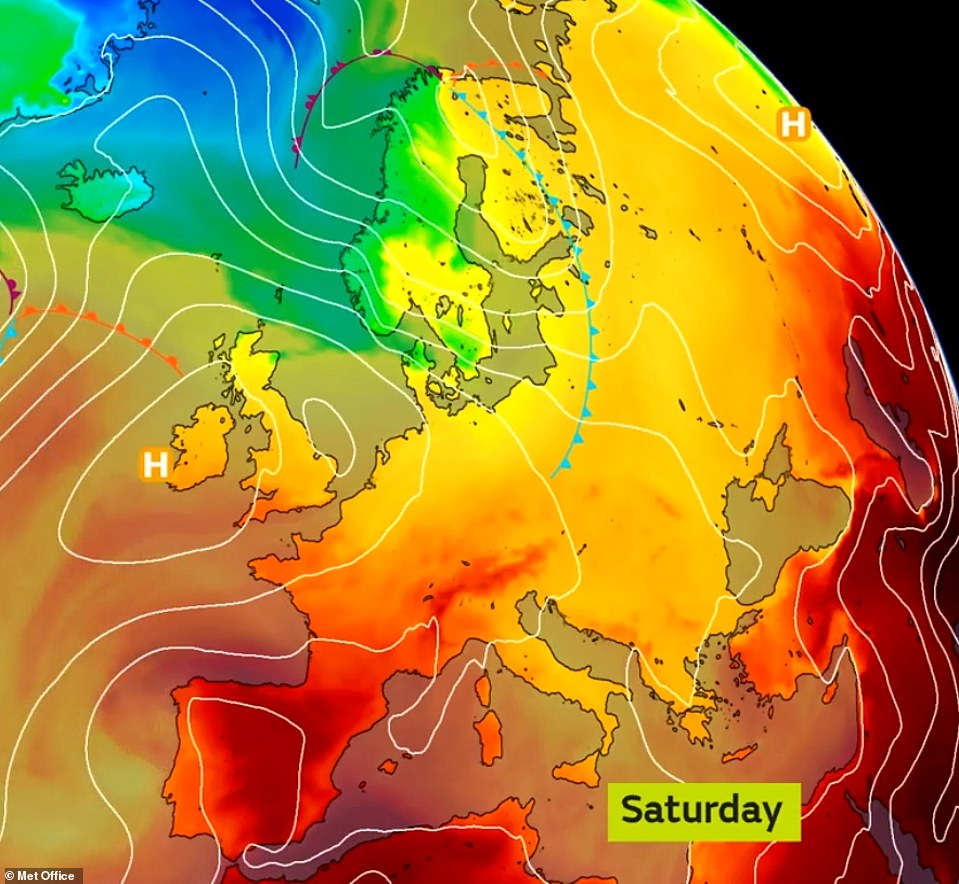 He added: ‘There are very early signs that the high pressure might start to break down at the end of the month but we are a long way from that yet.’

Grass and weed pollen levels are also increasing at the moment, the Met Office tweeted, with the highest levels expected in southern England during the coming days.

Bookmaker Coral has made it odds-on at 1-2 for this month to finish as the hottest June on record in the UK, despite thunderstorms and a drop in temperatures towards the start of this month.

Coral’s John Hill said: ‘With a glorious summer to look forward to, not only does the betting point to record high temperatures, we could even have a hosepipe ban this year.’

But despite bookies offering odds on this being the hottest June ever, it is too early in the month to say whether we will see record-breaking average temperatures.

‘Currently we are not even in the top five hottest Junes on record,’ Mr Claydon said.

MATIC Price Trends Within Falling Wedge, Is Rebound On The Cards? 2021

Silver extended its correction from the recent highs above $28, and we could see even lower...