Gordon Brown often struck a forlorn figure as Prime Minister. But it was the dithering over what was his favourite biscuit that did the damage and best defined his short-lived premiership, after he was asked no fewer than 12 times by the Mumsnet website to reveal whether he was a Bourbon man, a Lemon Puff connoisseur or a down-to-earth digestive fan.

All he had to do was come up with a name. Any one would do. Instead, his decisive qualities were reduced to crumbs and Biscuitgate was up and running, until, 24 hours later — with, presumably, his spin doctors reaching for the hard stuff — Brown finally confessed to a despairing nation that he liked, well, ‘chocolate ones’.

Oh, dear. Within hours, his rivals were circling the cookie jar, with the then slick Tory leader David Cameron announcing that he was partial to oatcakes and know-it-all Lib Dem Nick Clegg saying he liked Rich Tea if they were dunked and Hobnobs if not. 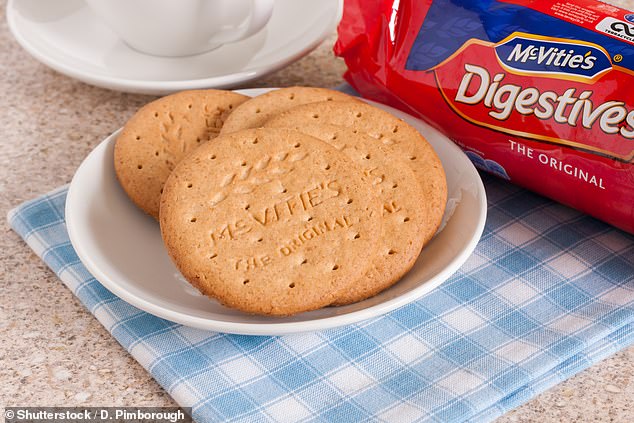 These things are clearly important in a country whose people devour more biscuits than any other nation on the planet. Only two weeks ago, a broadsheet newspaper described it as a ‘national tragedy’ that after 250 years United Biscuits was ceasing production of the Bath Oliver.

How dare they? Surely there should be a referendum on such matters. Would the Sovereign not step in if ever such a fate were to befall the custard cream or, heaven help us, the ginger nut?

And in what other country would a 320-page book about biscuits be taken quite so seriously? Perhaps the answer lies with its title.

The Biscuit: The History Of A Very British Indulgence, released today, in which the author, Lizzie Collingham (once a Research Fellow at Jesus College, Cambridge, no less), explores the genesis of our national obsession and chronicles how, with the help of the Empire’s trade tentacles, we took biscuits to every corner of the globe.

Indeed, as biscuit-maker Crawford’s once pointed out, the afternoon pause for ‘tea-time of a hot drink and something sweet is the one meal which the English have created and given to the world’.

Biscuits have seen us through good times and bad — especially the bad if the grisly Covid summer of 2020 is anything to go by. 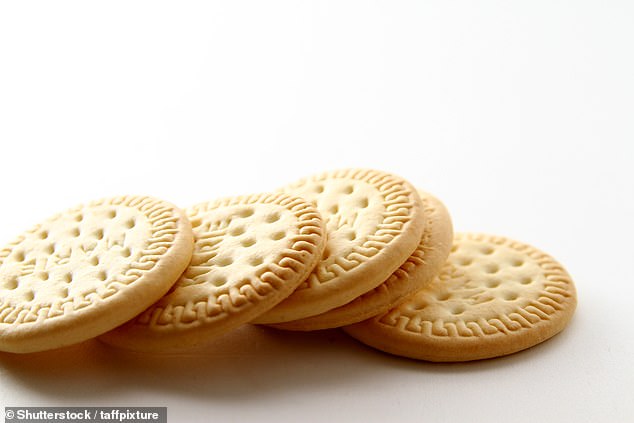 According to the market research firm Kantar, in the three months leading up to July 12 we spent an extra £19 million on biscuits. And, now, as various restrictions sweep across the country once again, the timing of Collingham’s tome could not be better.

Throw in a new series of The Great British Bake Off, with biccies inevitably bringing joy to some, tears to others, and it’s tempting to suggest that the humble biscuit has never had it so good.

It’s been a long history, possibly going back as far as the Neolithic era but certainly to the Romans, whose ‘panis biscoctus’ comprised bread baked twice to make it crisp and longer lasting — and biscuits do last a long time.

The earliest surviving example dates back to 1784 and is a ‘ship’s biscuit’, so named because they were given as rations to British sailors 200 or so years earlier during the Spanish Armada.

Trouble was they were renowned for their inedibility and were so indestructible that some sailors used them as postcards.

Sailors used to soak their biscuits in beer as a base for a stew called lobscouse, something that caught on among the poor in the Liverpool docks and is the reason Liverpudlians are known as Scousers. In similar vein, a slush fund originally referred to any extra cash a ship’s chef used to make from selling the fat, or ‘slush’, from the lobscouse. 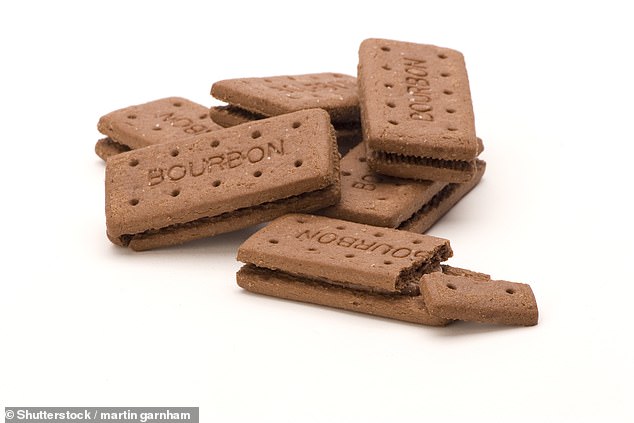 According to the market research firm Kantar, in the three months leading up to July 12 we spent an extra £19 million on biscuits

It wasn’t until the 19th century that sweetened biscuits became a staple for the British upper and middle classes, their names often associated with international nobility or celebrity — Bourbon after a French royal household; Marie after a Russian duchess; Garibaldi (two thin layers of dough with currants sandwiched between them like dead flies) after the Italian general and Albert after Queen Victoria’s husband.

Victoria herself loved biscuits, but she drew the line when a company wanted to name a biscuit after her. Instead, the palace suggested that it should be called Osborne after her home on the Isle of Wight.

Lizzie Collingham has filled in plenty of gaps in my knowledge. Digestives, for instance, were invented by McVitie’s to cure disordered stomachs and reduce flatulence, or ‘windy colic’.

And just in case anyone might be tempted to think I have a nerdish fascination with biscuits, it’s worth pointing out in mitigation that I grew up with them. There was no getting away from biscuits, biscuit tins, discussions about biscuits — and we ate a lot of them, too.

Huntley took care of the baking, while Palmer developed the first continuously running machine for biscuit manufacturing. Mind you, his first effort resulted in a massive explosion that nearly killed him and several other employees. 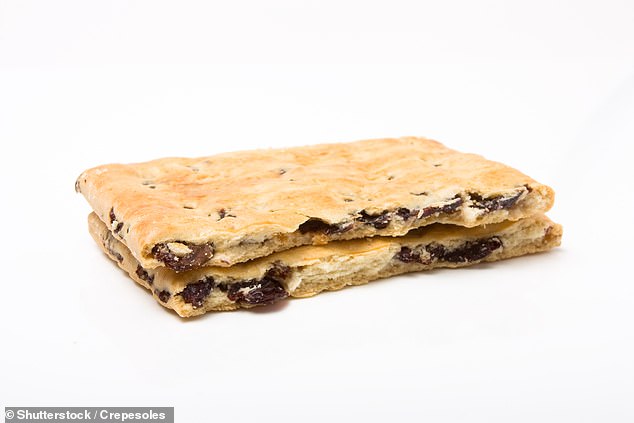 By the beginning of World War I, H&P, as it was affectionately known, was the largest and most famous biscuit company on earth.

The Reading factory employed more than 6,000 people — over a quarter of the working population of the town — and was exporting to 134 countries. It held the Royal Warrant of every royal household in the world.

It was the ‘number one in biscuits and second-to-none in cakes’ — at least, that was what the advertising slogan said, and no one seemed to disagree. ‘Huntley & Palmers make ’em like biscuits ought to be’ was the television commercial I remember the best.

Collingham devotes a chapter to biscuit tins. They almost warrant a book of their own, such were their exquisite beauty, fashioned into handbags, suitcases, books, buses, postboxes and the like. Some are now collector’s items.

Sir Henry Stanley took H&P biscuits on his trek across Africa in search of Dr Livingstone and is supposed to have made peace with a potentially violent tribe in Tanzania by offering them a few smart-looking tins.

In 1890, two tins were discovered being used as ornaments on an altar in a Catholic church in Ceylon, while a Mongolian chieftainess was said to have kept one in which she grew garlic heads as a ‘visible sign of her high position’.

In Uganda, Bibles were kept safe from destructive white ants in two pound tins and, in 1904, the first Europeans to visit the holy city of Lhasa, in Tibet, were welcomed by a stack of biscuit tins to assure them that they were still in touch with civilisation.

Captain Scott took Huntley & Palmers biscuits with him to the South Pole and even sent a letter of recommendation from Antarctica dated October 20, 1911, which must have seemed like a marketing dream for the directors back in Reading.

He wrote: ‘I am of the opinion that no better biscuits could be made for travelling purposes. I consider that they especially meet the requirements of Polar work in their hardness, food value and palatability.’

A packet of biscuits was found alongside Scott’s frozen body a few weeks later and, in 1999, one of those biscuits, wrapped in greaseproof paper, fetched £4,000 at a Christie’s auction.

Most people born after 1960 have never heard of Huntley & Palmers (the company was gobbled up by Nabisco in 1984 and is now no more), but the biscuit lives on and, unlike Gordon Brown, we all have our favourites. And what I like about this peculiarly British indulgence is that no one pretends biscuits are healthy.

They are largely made of sugar and butter; their nutritional value falling foul of the food police. But they are undeniably good for the soul — and not for a second should we be ashamed of guzzling them in vast numbers.

US election: ‘Our kids died in the Parkland shooting, but we disagree on guns’