The Port of Dover closed to all accompanied vehicles leaving the UK tonight for the next 48 hours after France imposed an inbound travel ban following the mutant Covid-19 strain which plunged London and the south east into Tier Four.

Hauliers coming to Britain from France will still be allowed in however there are fears that lorry drivers will not travel to avoid being ‘marooned’ in the UK. 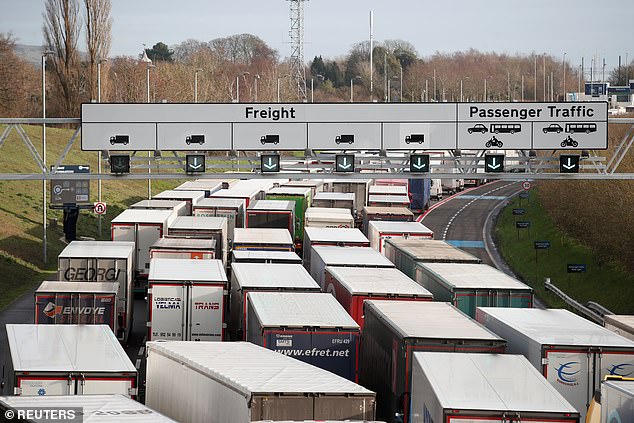 The Port of Dover closed to all accompanied traffic leaving the UK for the next 48 hours after France imposed an inbound travel ban. Pictured: Lorries queue on the M20 in Folkestone

The Food and Drink Federation CEO Ian Wright said: ‘Tonight’s suspension of accompanied freight traffic from the UK to France has the potential to cause serious disruption to UK Christmas fresh food supplies and exports of UK food and drink.

‘Continental truckers will not want to travel here if they have a real fear of getting marooned.

‘The Government must very urgently persuade the French government to exempt accompanied freight from its ban.’ 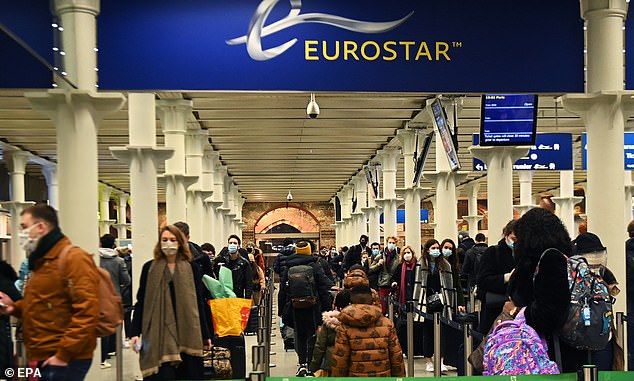 The French Government joined a number of other European nations in banning inbound flights from the UK. Pictured: Passengers at King’s Cross St.Pancras train station queue to board trains to Paris in London

It comes after Transport Secretary Grant Shapps urged hauliers to avoid travelling to Kent ports as the closure of the France-UK border is expected to trigger ‘significant disruption’.

The French Government joined a number of other European nations in banning inbound flights from the UK in a bid to prevent the spread of a coronavirus mutation sweeping through London and the south east of England.

Mr Shapps tweeted on Sunday night: ‘Following the French Government’s announcement it will not accept any passengers arriving from the UK for the next 48hrs, we’re asking the public & particularly hauliers not to travel to Kent ports or other routes to France. 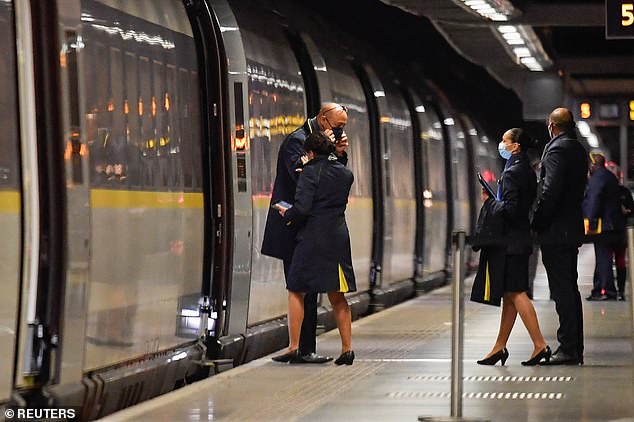 Meanwhile, Eurotunnel tweeted that its last shuttle service departing for France would leave at 9.34pm, with access to its UK site prohibited from 10pm. Pictured: Staff board the last scheduled Eurostar train from London to Paris

Earlier, French transport minister Jean-Baptiste Djebbari confirmed the country was suspending all traffic from the UK from midnight for at least 48 hours.

The Port of Dover tweeted on Sunday night that its ferry terminal was ‘closed to all accompanied traffic leaving the UK until further notice due to border restrictions in France’.

On its website it said: ‘Both accompanied freight and passenger customers are asked not to travel to the Port.

‘We understand that the restrictions will be in place for 48 hours from midnight (CET).

‘We apologise for the inconvenience and will provide an update as soon as possible.’ 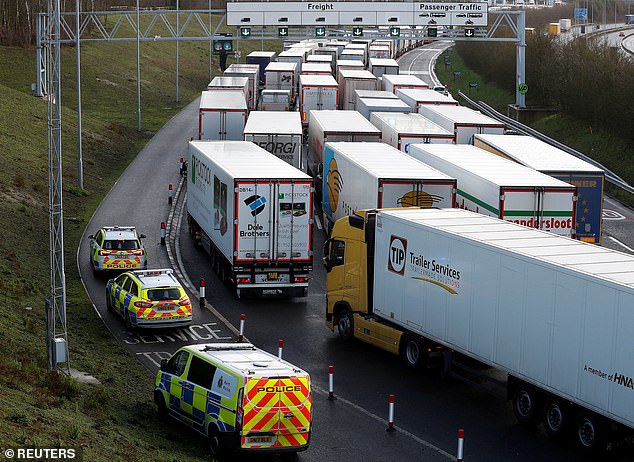 The Port of Dover tweeted on Sunday night that its ferry terminal was ‘closed to all accompanied traffic leaving the UK until further notice due to border restrictions in France.’ Pictured: Freight in Folkestone line up before boarding the Channel Tunnel

It added: ‘Port of Dover Cargo Terminal, Marina and other areas of the Port remain open.’

Meanwhile, Eurotunnel tweeted that its last shuttle service departing for France would leave at 9.34pm, with access to its UK site prohibited from 10pm.

Rod McKenzie, from the Road Haulage Association, told Sky News that 10,000 lorries a day crossed between Dover and Calais in France.

He added: ‘Brexit stockpiling is one thing, the Christmas rush is another thing, but the absolute hammer blow now is to close the borders for 48 hours.

‘That is a serious disruption of the all important supply chain.’

Logistics UK, formerly the Freight Transport Association, which is based in Tunbridge Wells, tweeted: ‘Logistics UK is aware of news that accompanied freight to France is being not allowed for 48 hours; we are concerned about the welfare of drivers and we are urgently seeking more information for our members.’

Tory Kent MP Sir Roger Gale urged No 10 and Michael Gove, the Chancellor of the Duchy of Lancaster, to ‘get a grip’ on the developing situation with the Britain-France border.

He tweeted: ‘Cross Channel travel chaos. Don’t try to blame the Transport Department. Time for Number Ten and ‘CDL’ to get a grip.’

The Belgian government also announced its borders with the UK will close at midnight on Sunday.

The Eurostar rail service said on its website on Sunday evening that due to the French and Belgian border closures it was unable to run any trains from London to Paris, Brussels, Lille or Amsterdam on Monday or Tuesday.

Services from Amsterdam, Brussels and Lille to London would also not run on these days, but trains from Paris to London continue to operate.

The rail company said it planned to resume all services to and from the UK on Wednesday and was awaiting further details from relevant governments on how travel restrictions will be enforced.