Dripping in glamour and treachery and based on a true-life story, the House Of Gucci has got both film and fashion fans buzzing.

From a virginal bridal gown to sizzling skiwear, the film has its leading lady — Lady Gaga as jealous Patrizia Reggiani, who hired a hitman to kill her ex-husband, Maurizio Gucci — tripping a veritable catwalk of style across the big screen.

First impressions count, and the dress worn by Patrizia when she met Maurizio Gucci at a party is a belter, based on a pink dress the real-life Patrizia wore.

It was made using duchess satin and took six weeks to fit at the hands of Janty’s costume cutter, Dominic Young.

Originally the gown was much longer — rising by 18 in at Ridley Scott’s request.

Janty says: ‘We kept five camera crews waiting that day, luckily LG [as she calls Lady Gaga] had her man with her from New York, who was the most wonderful hand sewer and had the steadiest hands of us all. 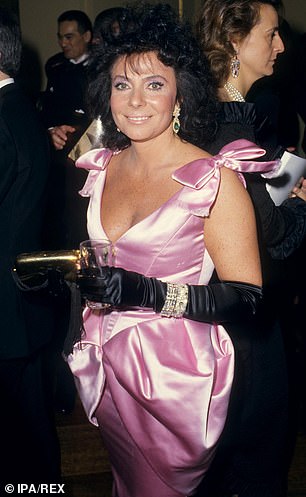 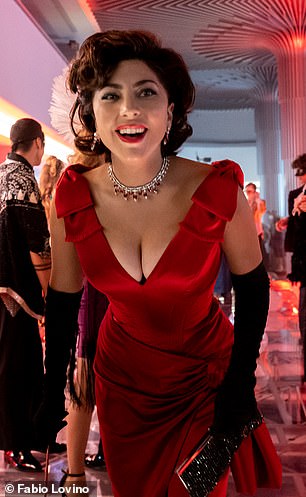 The dress worn by Lady Gaga’s Patrizia (right) when she met Maurizio Gucci at a party is a belter, based on a pink dress the real-life Patrizia wore (left)

‘So we stood her on an apple box and took a pair of very sharp scissors to it!’.

Patrizia Reggiani was the queen of bling, never opting for one piece of jewellery if half a dozen would do.

For much of the film, Janty made use of 20 trays of costume jewellery, but for big occasions, security guards from upmarket jewellers Bulgari or Boucheron would arrive on set with the real deal: on this occasion, diamonds and rubies from Bulgari.

Janty and her team had access to the entire treasure trove of the Gucci archive for the film.

It was Gaga’s idea to wear head-to-toe logo-bedecked Gucci for an encounter in which Patrizia discovers her maid has a fake Gucci handbag, which triggers a scene in which she goes down to New York’s 42nd Street and berates the seller.

‘LG felt, and I agreed, that she should be in full-on Gucci,’ says Janty.

The second scene in which the star wore Gucci has her in a logo-print blouse and leather mini-skirt, on the day she is served with divorce papers while at her daughter’s sports day.

Eight to ten weeks in the making, the wedding dress with cathedral veil was Janty’s favourite design, a ‘labour of love’, the lace all painstakingly hand-sewn.

With its sweetheart neckline, high-low hem and lace sleeves, it’s not a copy of Patrizia’s floor-length, high-necked gown — although Janty had a replica made. 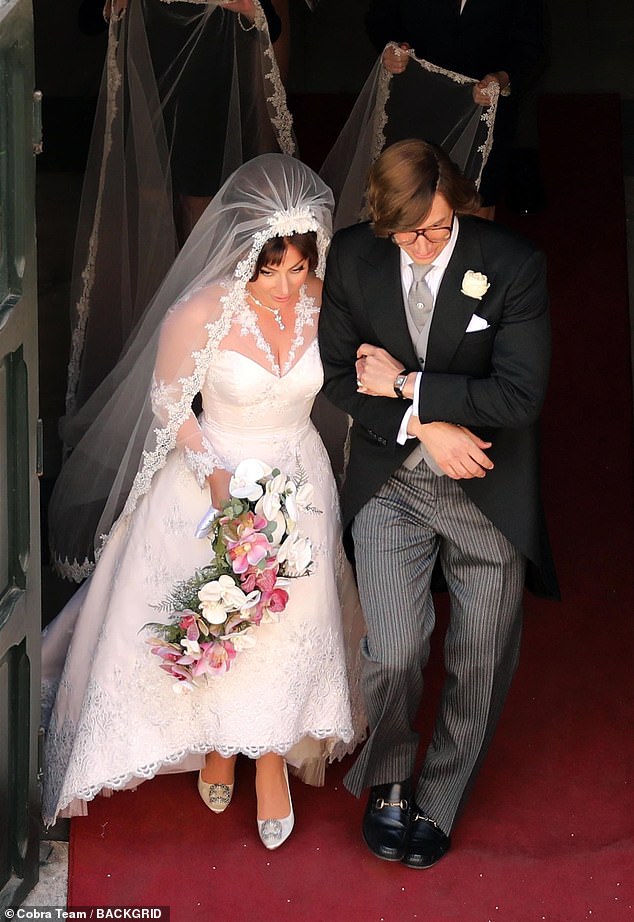 Eight to ten weeks in the making, the wedding dress with cathedral veil was Janty’s favourite design, a ‘labour of love’, the lace all painstakingly hand-sewn (pictured)

‘We didn’t decide until the day,’ says Janty. ‘Her hair and make-up team, her manager, me and my dressers — we all just went: ‘It’s definitely got to be this one.’

In this scene Patrizia is dressed to kill (although not literally) in vintage Yves Saint Laurent, rented from one of three Italian costume houses Janty deployed, along with a vintage mink coat.

The red slingbacks were designed by Janty and made in Rome, by theatrical shoemaker Pompei.

Janty says, ‘I had four or five different designs, which we sent to LA and she put one pair on and said: ‘God I love these shoes — have them made in every colour!’ 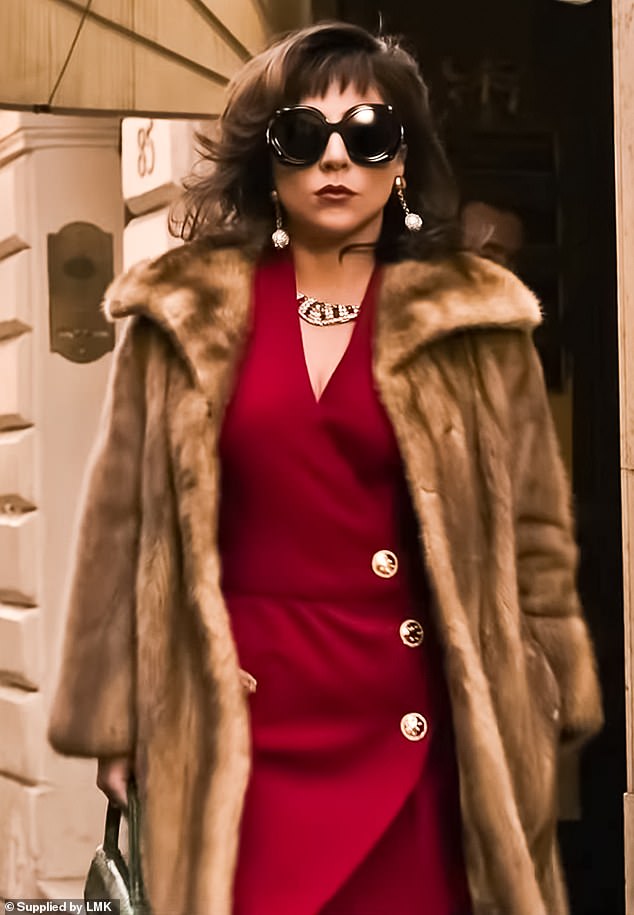 ‘She would come into a fitting; we did about ten fittings, quite apart from the Zoom fittings when we couldn’t move [due to Covid restrictions].

‘She’d come in, we’d discuss the scene, we’d have all our vintage there, she’d say ‘I fancy that one’ and then we would do every single item of jewellery, shoes, bags for that particular scene — and then she would never wear it again.’

The strapless silk lace dress and jacket the star wears for a Gucci family gathering on the banks of Lake Como is an homage to an outfit Lollobrigida wore, and was made by Dominic Young.

‘LG said she really wanted to dress like her Italian mother did at that time, so we took that as a jumping-off point,’ says Janty.

Dressed for the slopes all in black, save for lashings of gold costume jewellery and a white chinchilla fur hat, she looked the perfect villainous wife.

Co-stars Adam Driver, as Maurizio Gucci, and Camille Cottin, the French actress who plays his lover at the time of his death, were originally meant to wear fur hats, too, before Lady Gaga declared them off-limits. 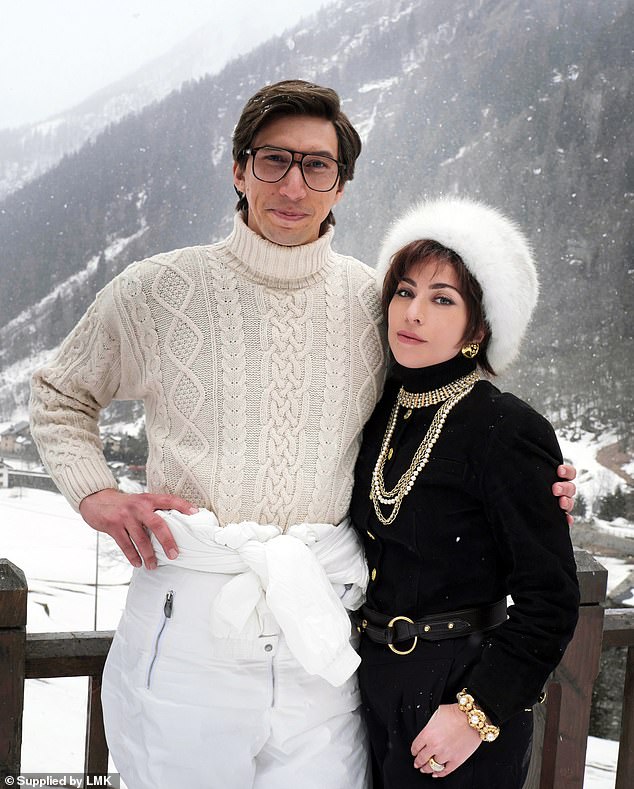 Dressed for the slopes all in black, save for lashings of gold costume jewellery and a white chinchilla fur hat, Gaga looks the perfect villainous wife (pictured with co-star Adam Driver)

Janty says: ‘Madam said: ‘She’s not wearing a fur hat — I’m going to have all the fur hats’.

True to character, Gaga wore the lion’s share of jewellery, too.

‘All the costume jewellery we got from a rental jeweller, Pikkio, in Rome — I cleaned them out!’ 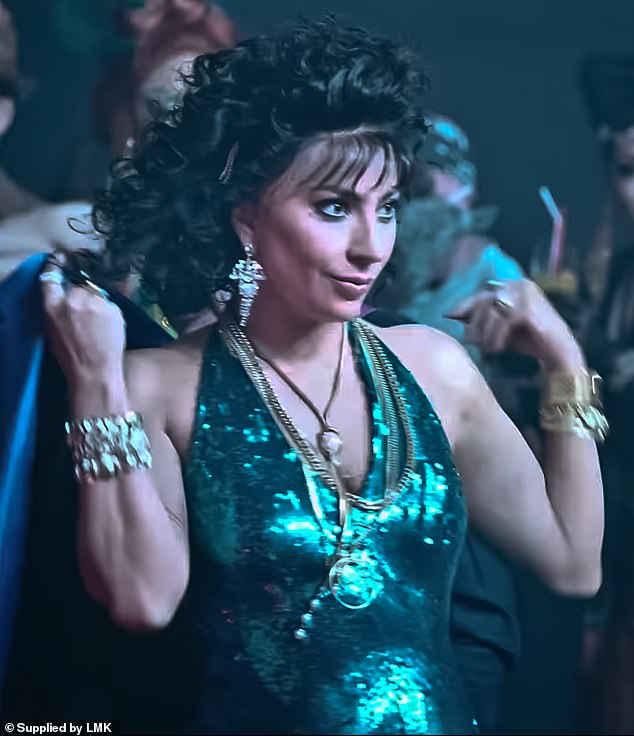 The vivid turquoise halterneck dress Gaga’s Patrizia wears in a nightclub scene in the trailer was carefully made by Janty’s team, accommodating a six-month baby bump for the character, who was pregnant with one of her two daughters at the time.

No wonder this picture of lady Gaga was used in promotional images for the movie. Her Patrizia makes funeral attire a style sensation in head-to-toe black, save for a bold, white, costume jewellery necklace with matching bracelet, and a glossy lipsticked pout.

‘LG wears them all in the film, but this one has such an interesting neckline.

‘He made it out of silk and she was very happy to wear it and it just worked for this scene.’