When the bare-chested gunman suddenly appeared aboard the speeding Paris-bound train, laden with weapons and his mind allegedly filled with Islamic State group propaganda, passengers at first were stunned.

Then, they sprang into action.

‘You’re not going to sit in the corner and die,’ is what British businessman Chris Norman recalls telling himself on August 21, 2015 as he steeled himself to act. 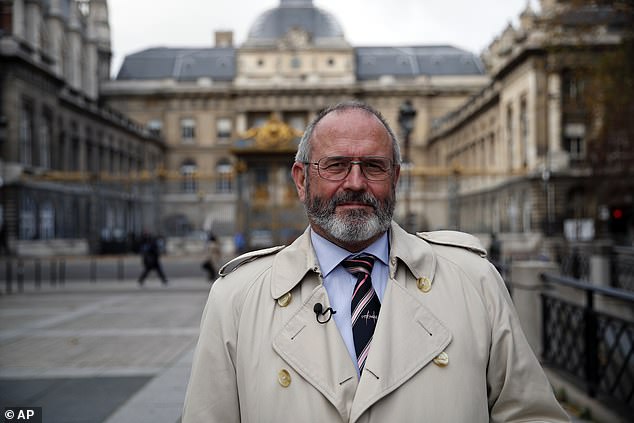 British businessman Chris Norman (pictured) said that while other passengers were hitting and trying to choke the gunman, he kept a grip of his right arm and looked into the man’s eyes 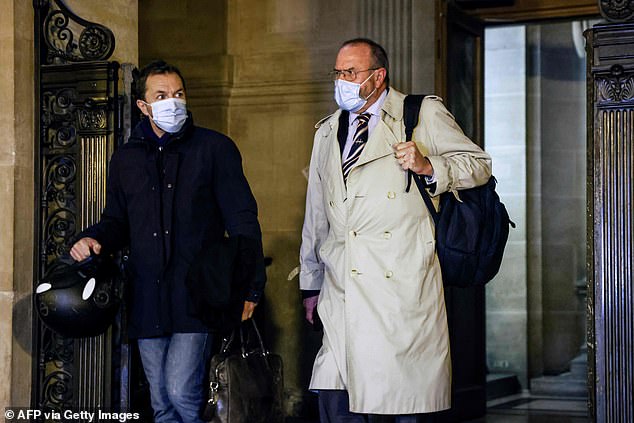 ‘I was terrified when I first saw him coming up the aisle, but then I got angry,’ the 67-year-old recalled on Thursday before he testifies at the attack suspect’s trial in the French capital.

The thoughts of another passenger who helped thwart the attack on the train that day, French-American citizen Mark Moogalian, weren’t for himself but for his wife when he lunged for the gunman’s Kalashnikov rifle.

‘I was trying to protect Isabelle,’ Moogalian said, also speaking Thursday before he testified in Paris. ‘There was no way I was going to let anything happen to her. I was going to do my best.’ 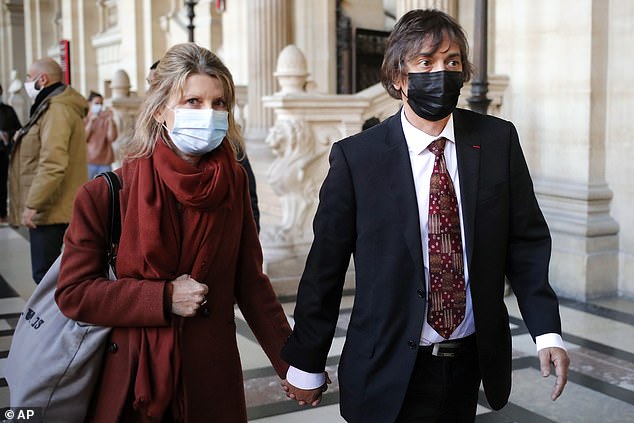 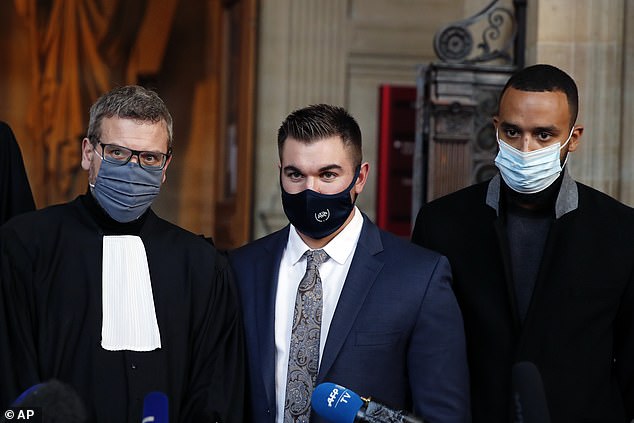 Alek Skarlatos (centre), Anthony Sadler (right), who helped foil the attempted terror attack on the Amsterdam to Paris train with US airman Spencer Stone, stand with their lawyer (left) to talk to the press during the Thalys attack trial at the Paris courthouse today 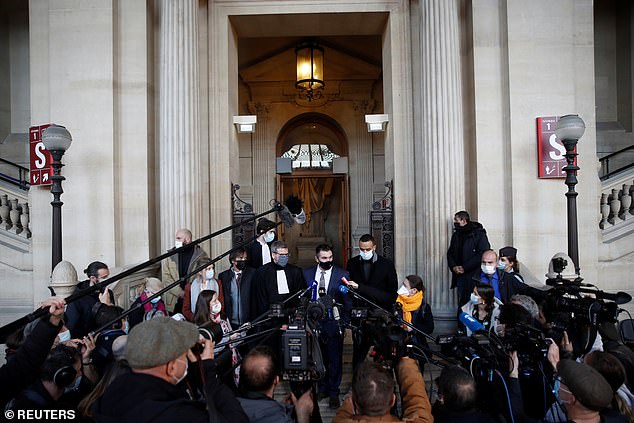 The recollections at the courthouse from passengers who disarmed the alleged Islamic State operative on the train traveling from Amsterdam highlighted the split-second decisions that foiled what could have become a mass slaughter.

The passengers’ heroics inspired Clint Eastwood to direct a Hollywood movie reenacting the dramatic events: ‘The 15:17 to Paris.’

‘My first reaction was panic, put yourself in a protective ball and hope nothing happens,’ Norman said. Then, ‘I came to the conclusion that really I had to move, I had do something.’

The attack suspect, Ayoub El Khazzani, faces a maximum sentence of life in prison if he is convicted of attempted terrorist murder. The 31-year-old Moroccan is being tried with three suspected accomplices. 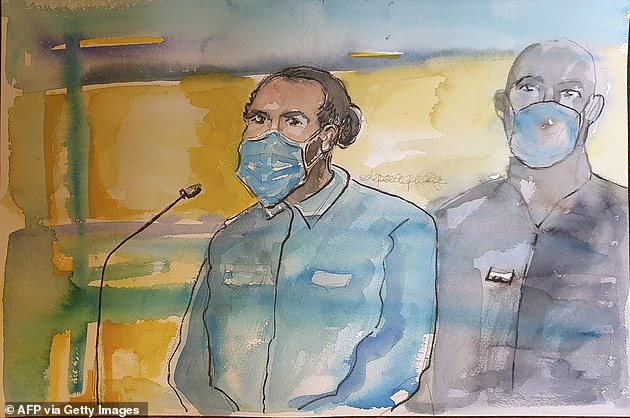 Pictured: A courtroom sketch of Moroccan gunman Ayoub El Khazzani made on November 16. El Khazzani was subdued by two US soldiers and their friend after he appeared from a train toilet carrying an AK-47 and a bag full of ammunition

Authorities say El Khazzani boarded the train in Brussels armed with the Kalashnikov, nine clips with 30 rounds each, an automatic pistol and a cutter. Once aboard the train, El Khazzani lingered in a restroom between cars and then emerged bare-chested with his weapons, according to investigators.

Norman said that while other passengers were hitting and trying to choke the gunman, he kept a grip of his right arm and looked into the man’s eyes.

‘As soon as he started trying to take out his handgun, I took his arm,’ Norman continued. ‘There was one thing I didn’t want, which was for him to take his gun and use it to escape.’ 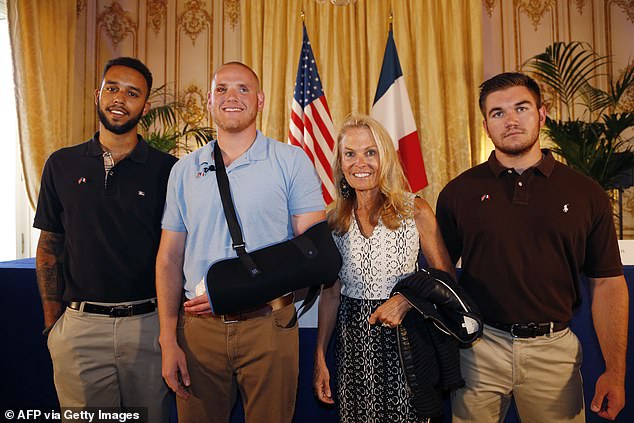 In this file photo taken on August 23, 2015 Off-duty US servicemen Anthony Sadler (left), Spencer Stone (second left), Alek Skarlatos (right) and US ambassador to France Jane Hartley (second right) pose after a press conference at the US embassy in Paris two days after the foiled attack 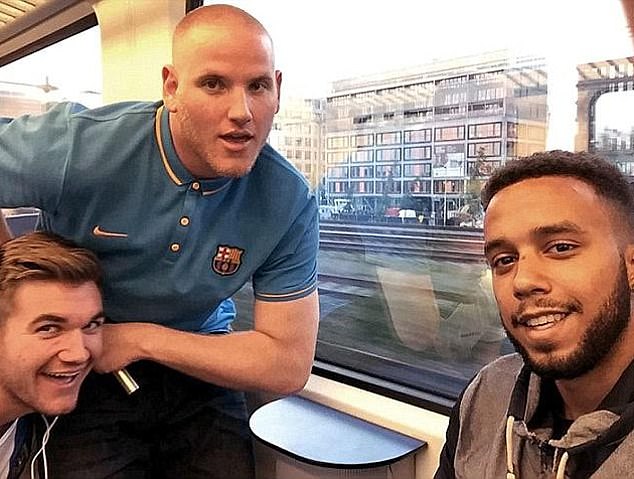 Testifying in court Thursday, one of three Americans who tackled the gunman, Anthony Sadler, said: ‘It was an intense fight. It was hard to get him under control, even (with) the three of us. And he kept pulling out weapons.’

Had they not acted, ‘He would have shot everyone in our train car’ and likely moved on to the next, Sadler added.

Moogalian said the courtroom proceedings are allowing him to piece together the blur of events from that day. 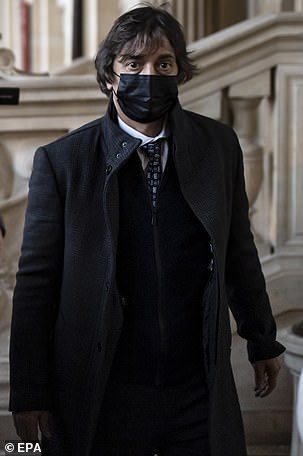 One of the passengers, Franco-American professor Mark Moogalian (pictured on Monday arriving at the trial) grabbed Khazzani’s assault rifle as he emerged from the toilet, but was shot in the process

‘Everything happened so fast. There was so much confusion,’ he said.

His wife, Isabelle, said subduing El Khazzani was ‘a five-man job’ and that she regarded her husband as a hero. Moogalian wrestled away the Kalashnikov before being seriously wounded by a shot from the gunman’s pistol.

‘They did it together, otherwise everybody would be dead,’ she said.

Moogalian said: ‘We were all very lucky. It took five or six of us to prevent a real catastrophe.’

‘All I know is that he shot me and he was carrying plenty of ammunition, enough to kill plenty of people,’ he said.

Another of the Americans who had tackled the gunman, Spencer Stone, rushed to save Moogalian, putting his fingers in the bullet wound to stop the bleeding.

With the attacker under control, the train rerouted to Arras, in northern France, where El Khazzani was arrested.

‘I think he just understood that he was not going to achieve the objective that he had come to achieve,’ Norman told AP. ‘There was no point in struggling anymore so he was just going to lay down and wait for his fate.’ 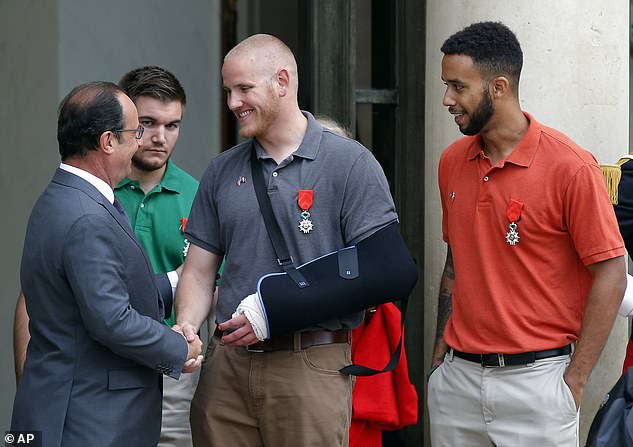 Spencer Stone who had been scheduled to appear as a star witness at the trial in Paris of Islamic State operative Ayoub El Khazzani, 31, was hospitalized Thursday in the French capital. Pictured: French President Francois Hollande bids farewell to US airman Stone, Alek Skarlatos (second from left) and Anthony Sadler (right) in 2015 after they foiled the attempted terror attack on the Amsterdam to Paris train

American passenger Stone had been scheduled to appear as a witness before he was hospitalized Thursday, casting doubt on whether he would still be able to testify about his role in El Khazzani’s dramatic capture.

‘The only thing I’m certain of is that he is not in a state to testify today. We are going to regroup this evening to gauge whether he can be heard tomorrow morning or afternoon,’ he said. 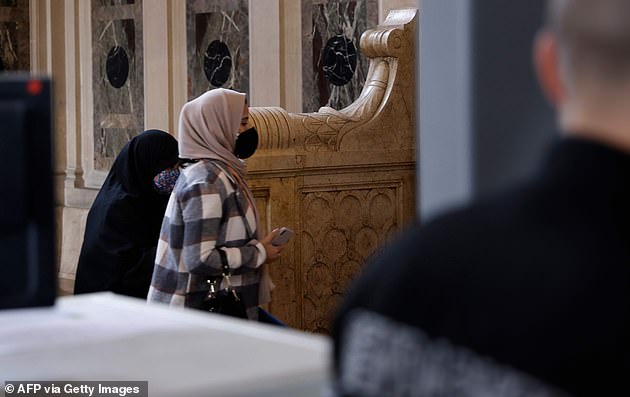 Pictured: Relatives of the man accused of the foiled terror attack arrive in court on Monday

Stone has said he was coming out of a deep sleep when the gunman appeared. He and Alek Skarlatos, then a 22-year-old member of the U.S. National Guard recently back from Afghanistan, snapped into action, tackling the gunman.

Skarlatos and Norman are scheduled to testify Friday.

‘To be quite honest, same thing happens to me again, I don’t know whether I’d do it,’ Norman told AP. ‘If you listen to the different testimonies of the people in the trial, quite a few of them didn’t realize that they were capable of what they did.’

Shane Warne auctions off his Brighton home for a whopping $5.65M