Britney Spears is spotted with an engagement ring on her finger


Britney Spears has been spotted wearing what appears to be a diamond ring on her engagement finger, amid her ongoing conservatorship battle against father Jamie Spears.

In her bombshell testimonial last month, Britney claimed that the conservatorship has prevented her from getting married to boyfriend Sam Asghari, who she has been dating since 2016, and also having a baby with him.

The star – who shares sons sons Sean, 15, and Jayden, 14, with ex-husband Kevin Federline – alleged how her father has controlled every aspect of her life including forcing her to have birth control implants to prevent her having anymore children.

On Sunday, the 39-year-old singer was pictured with fitness trainer Sam, 27, getting coffee from Starbucks and showing off what appeared to be a ring with a huge diamond on it. 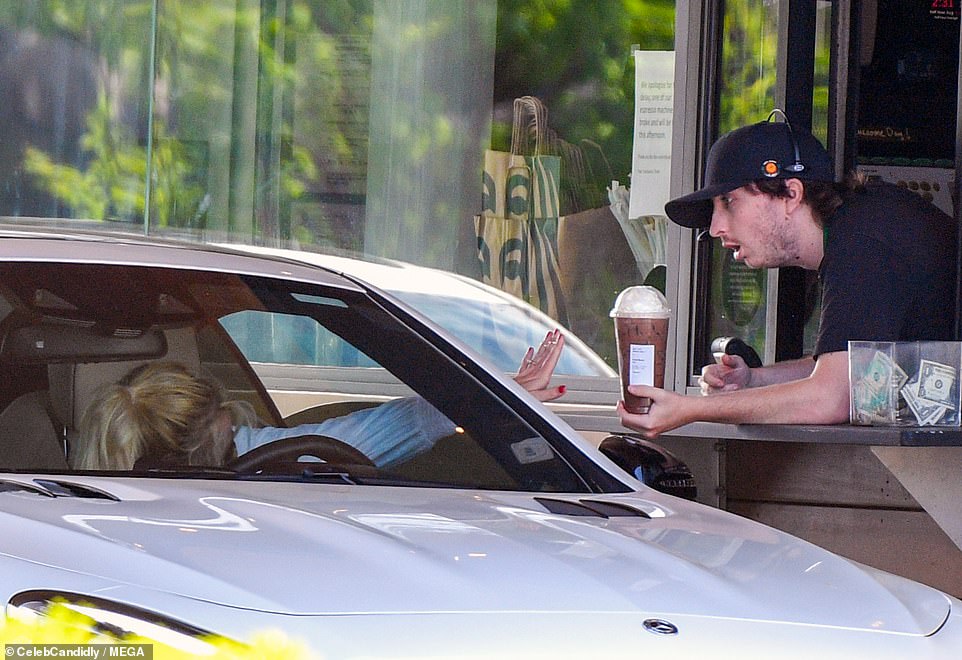 Sparkler: Britney Spears is spotted with a ring on her engagement finger as she steps out for coffee in LA with boyfriend Sam Asghari on Sunday

Last week, Britney won the right to choose her own lawyer after she tearfully told LA court she wants her father charged with conservatorship abuse. 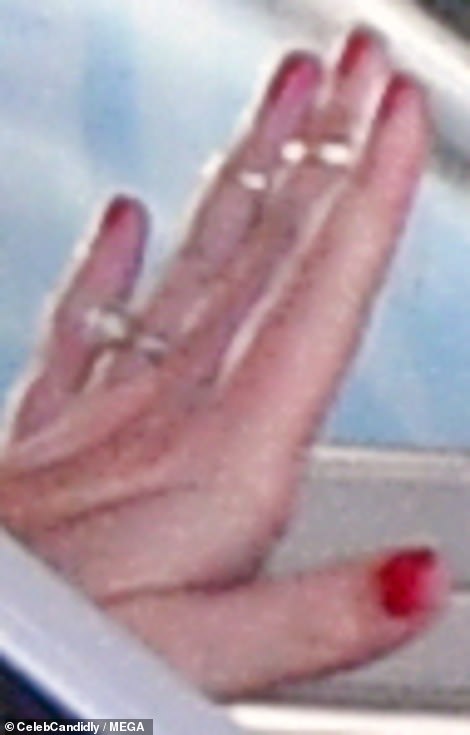 Sparkler: Britney showed off a diamond ring on her left hand

The court approved her request to appoint Mathew Rosengart as her lawyer, taking over from court-appointed Samuel Ingham.

Rosengart told the court he would be filing paperwork in the next few week to end the arrangement that has been in place since 2008.

This came after Ingham resigned in the wake of Spears’ bombshell court appearance on June 23 where she pleaded for the ‘abusive’ conservatorship to end.

Spears on June 23 told that she believed she was not allowed to choose her own attorney.

‘I was on tour in 2018. I was forced to do… My management said if I don’t do this tour, I will have to find an attorney, and by contract my own management could sue me if I didn’t follow through with the tour.

‘He handed me a sheet of paper as I got off the stage in Vegas and said I had to sign it. It was very threatening and scary.

‘And with the conservatorship, I couldn’t even get my own attorney,’ she said.

‘So out of fear, I went ahead and I did the tour.’

Over the weekend, a spat between Britney and her sister emerged, when Jamie Lynn took to Instagram to share selfies with the caption: ‘May the peace of the Lord be with you, and your spirit’ – however she later deleted the message.

When she’d posted the religious message, Britney shared a dancing video with the caption: ‘May the Lord wrap your mean a*s up in joy today… this is Bad Guy part 2 … same song new dance… if you don’t like it … don’t watch it!!!!!’ 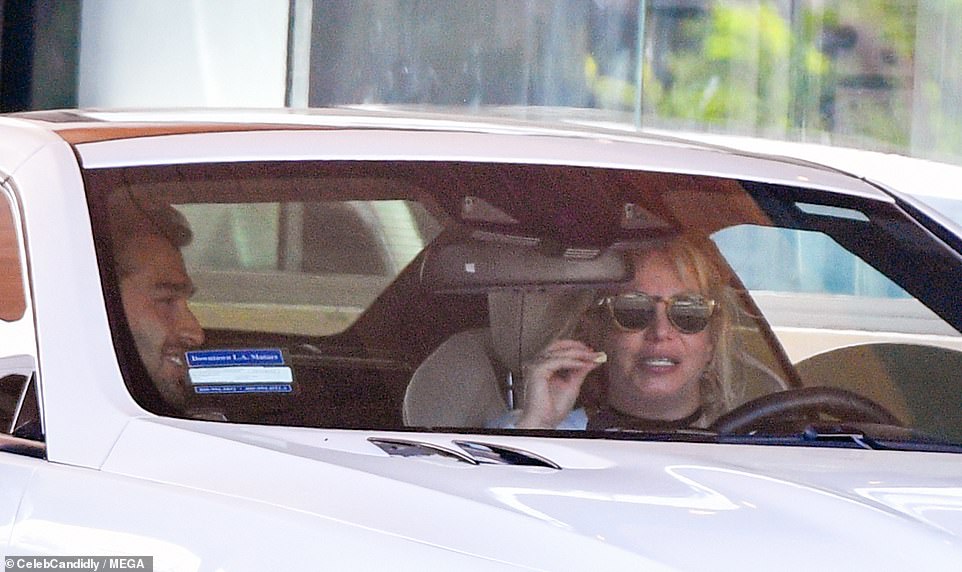 The battle continues: Britney was pictured on Sunday with her boyfriend Sam Asghari, after claiming last month her conservatorship prevented her from marrying him and having a child together

The social media snipes come amid Britney’s ongoing battle to have her father removed as her conservator after having every aspect of her life controlled by Jamie Spears for 13 years, with the controversial court case ongoing.

On Sunday, Jamie appeared to attempt to shake off any drama with sister she shared snaps in a sexy red suit while preaching about the ‘peace of the Lord,’ despite being publicly called out by the Toxic singer in a recent July 17 Instagram post.

Britney took aim in an expletive-filled post with a graphic that read: ‘Kiss my a**, eat s**t and step on legos,’ where she slammed her younger sister again, after accusing the teen star of speaking about the conservatorship to ‘save face.’ 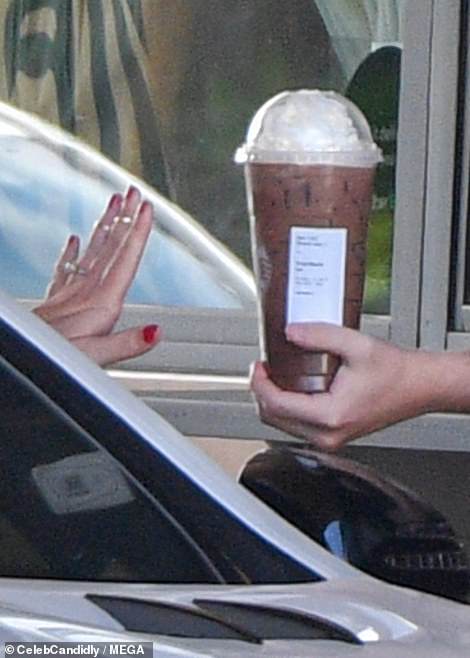 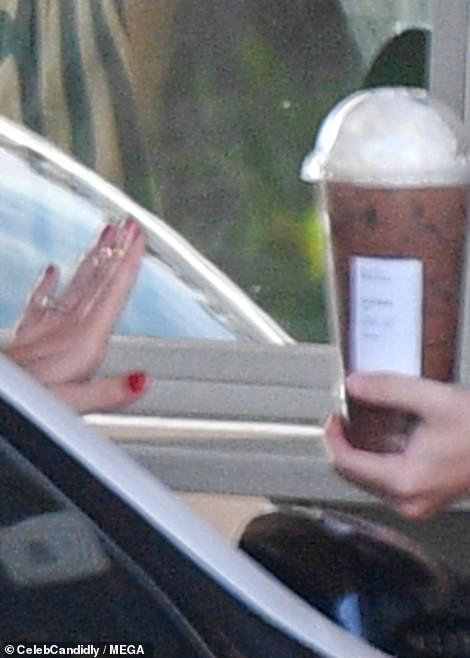 Grab and go: Britney flashed her jewels as she picked up her order 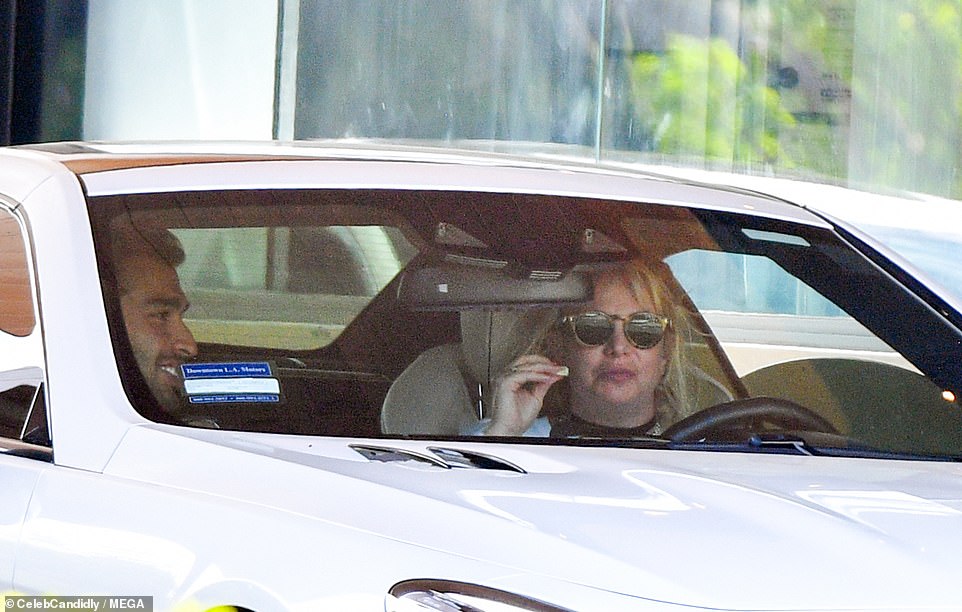 Tasting freedom: Last week, Britney won the right to choose her own lawyer after she tearfully told LA court she wants her father charged with conservatorship abuse 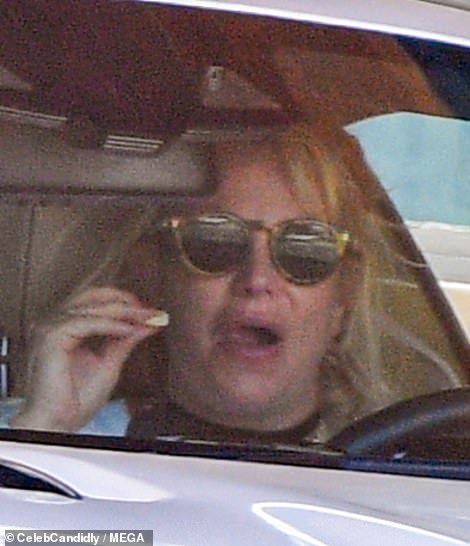 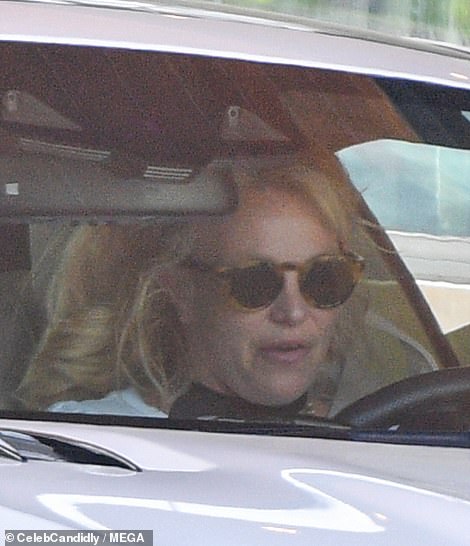 Getting her life back: The singer was seen picking up snacks and coffee at a Starbucks in LA 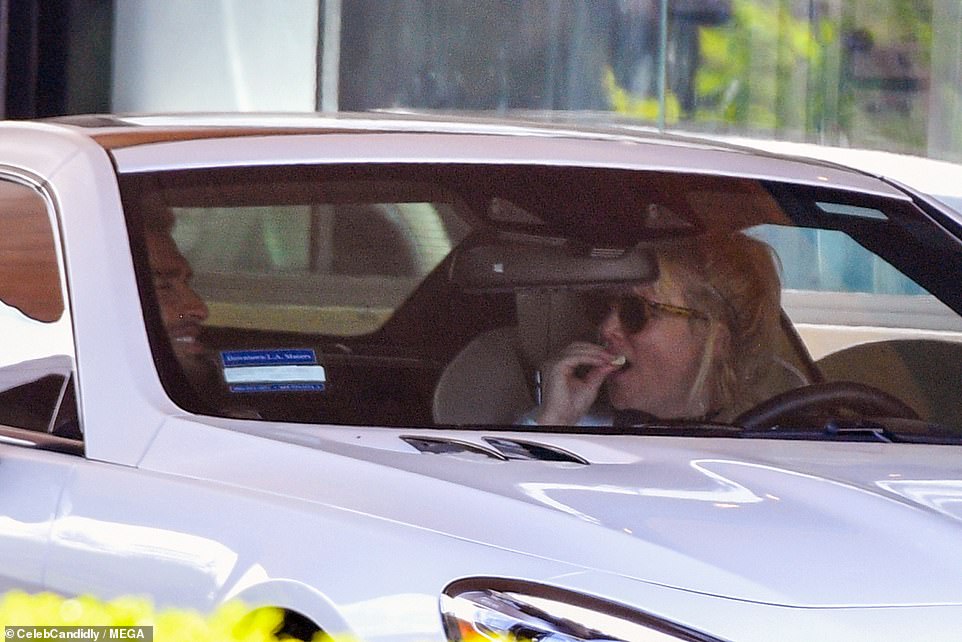 Jovial: Britney and her man Sam appeared to be in high spirits as they waited in their vehicle 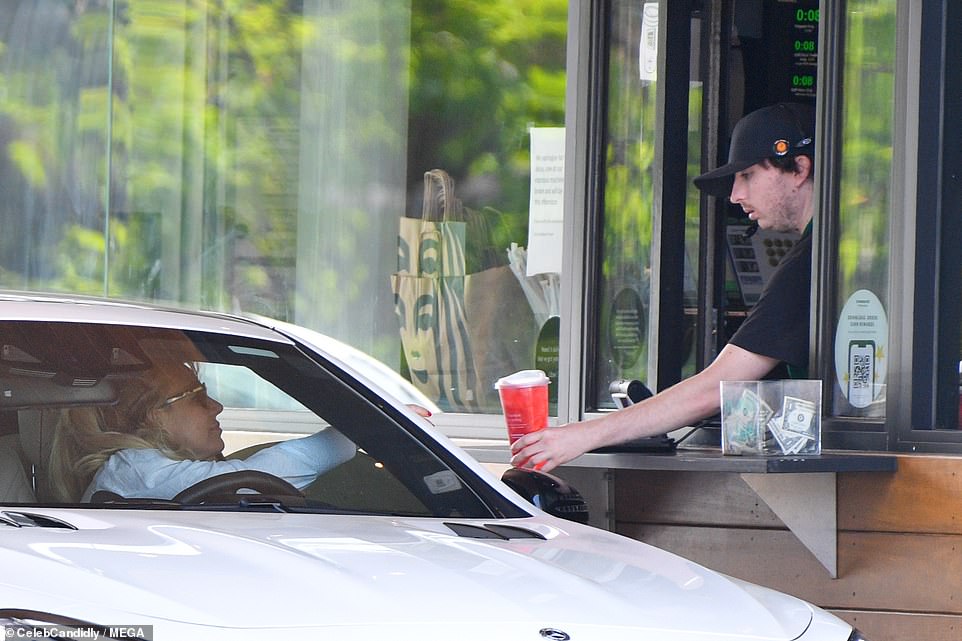 Order to go: The pop star now has a promising future with the help of her own lawyer

Despite Jamie’s placid response, Britney’s mirroring of her sister’s words implied a swipe, before Jamie changed her caption to a peace sign and heart.

As Britney’s conservatorship battle continues to rage on, her social media posts have grown increasingly transparent and bold as she has now spoken candidly about the situation — a vast change from her formerly cryptic posts.

Jamie, alongside their notorious father James — who has been controlling Britney’s life and finances for 13-years — was blasted on July 17 as the Lucky singer posted a graphic that read: ‘Take me as I am or Kiss my a**, eat s**t and step on legos.’ 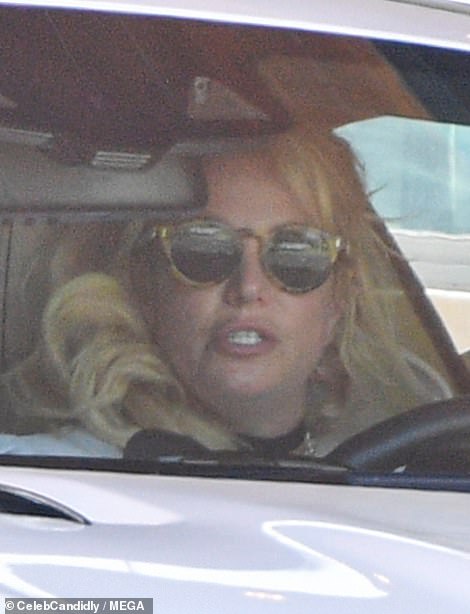 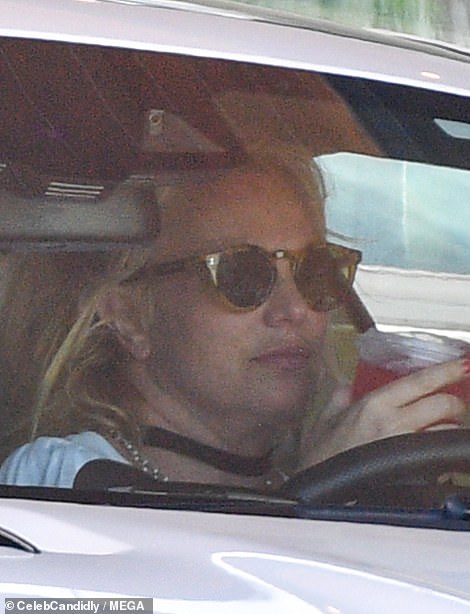 Restricted: This month, Britney told a court that she’s not allowed coffee or hair vitamins as part of the conservatorship 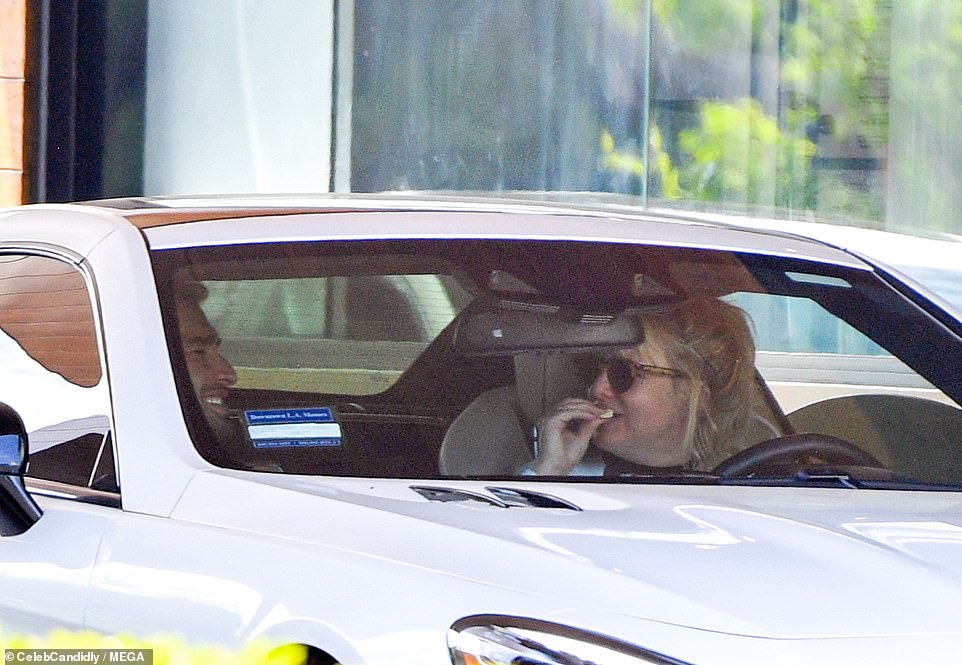 Smiles: Britney and Sam appeared to be in a good mood getting their caffeine fix

In the lengthy caption she condemned Jamie Lynn’s performance at the 2017 Radio Disney Music Awards — among other things — where she sang a medley of Britney’s songs ahead of presenting her with the RDMA ‘Icon’ Award.

She penned: ‘I don’t like that my sister showed up at an awards show and performed MY SONGS to remixes!!!!! My so-called support system hurt me deeply!!!!’

In video of the performance, the songstress joins her mother in standing and clapping along with the rendition of her hit Til The World Ends, but she appears to look less than enthused. 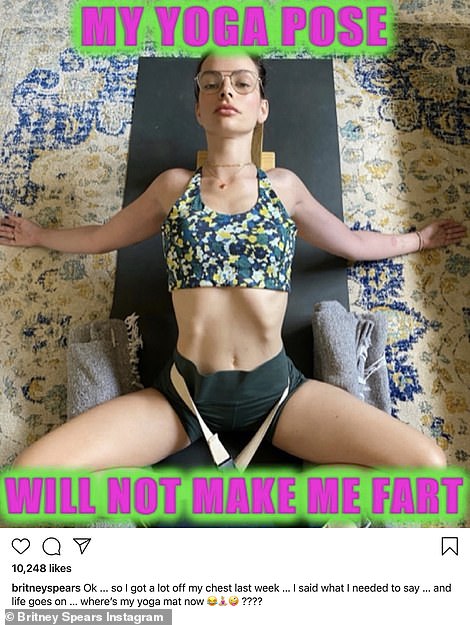 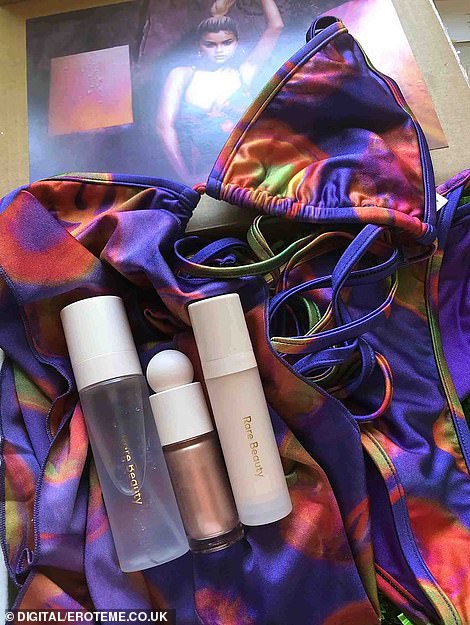 Making a joke: Britney posted this playful meme about yoga and flatulence on her Instagram page on Monday (while also sharing products by Selena Gomez)

Meanwhile, on Monday, the singer made a light-hearted joke about flatulence and yoga poses to her 32 million Instagram followers on Monday, amid her ongoing conservatorship battle against father Jamie Spears.

The Toxic songstress posted a meme showing a woman practicing the discipline, with a caption, ‘My yoga pose will not make fart.’

She followed up the post with her own caption that read: ‘Ok … so I got a lot off my chest last week … I said what I needed to say … and life goes on … where’s my yoga mat now?’

Actor Bob Odenkirk is in a stable condition after 'a heart-related incident', his reps confirmed on...