Millions of Britons were waking up to their first pub hangover of the year this morning after packing bars and restaurants for scenes of carnage as lockdown restrictions were eased.

This morning plenty were nursing sore heads and reaching for the pints of water as alcohol-induced headaches were reported nationwide.

But the ill-effects were celebrated by some as a sign of the country’s progress in getting nearer to normal.

One drinker declared ‘Happy to announce that I have a hangover after a night in a pub’ while another celebrated a ‘cracking day’.

Meanwhile one reveller spoke for many when she said ‘The hangover from April 12 is really like no other’. 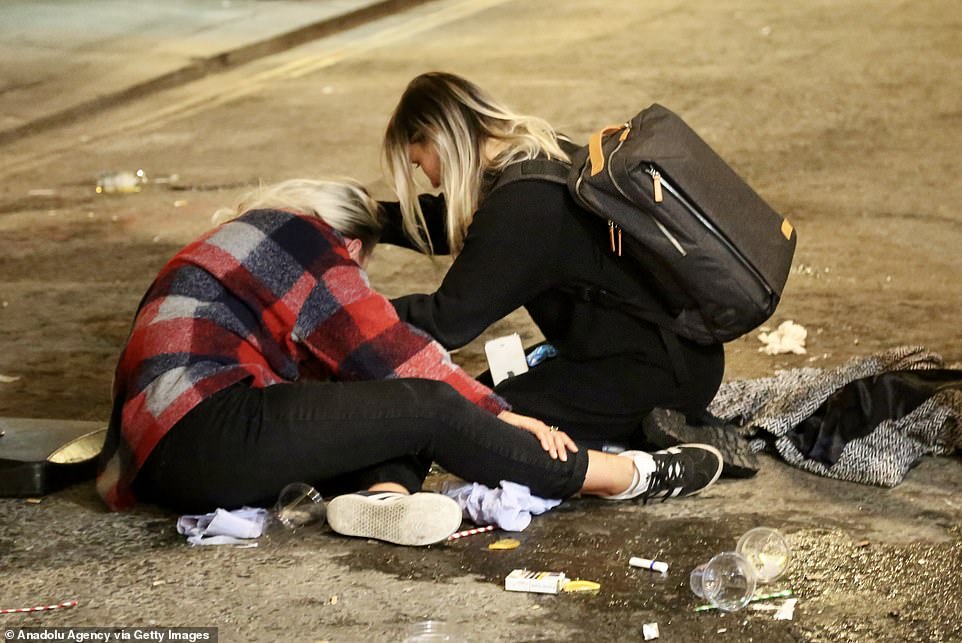 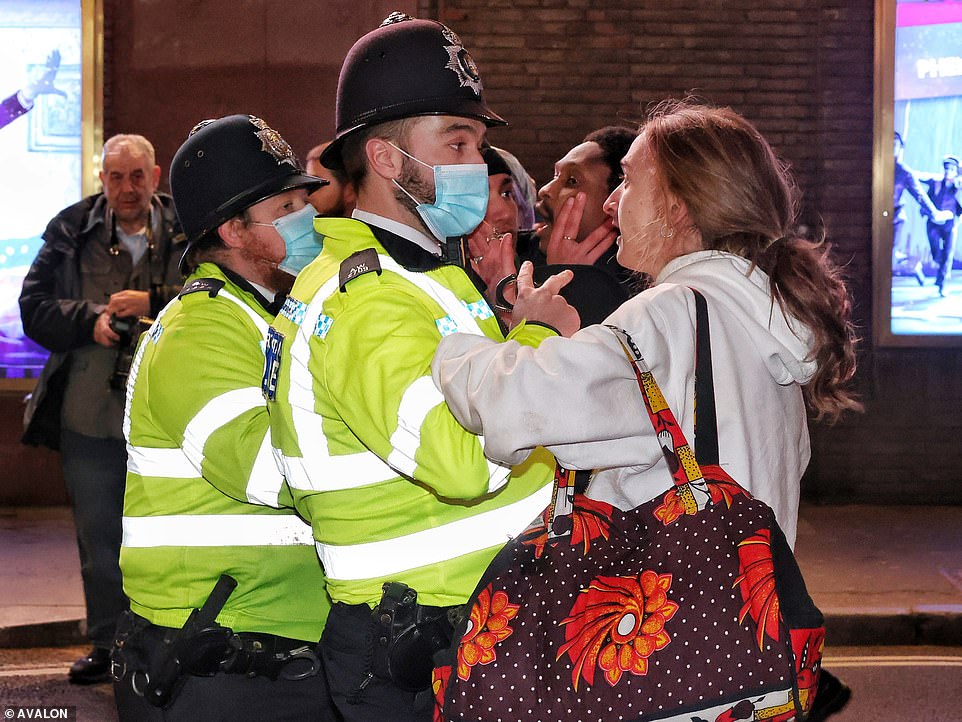 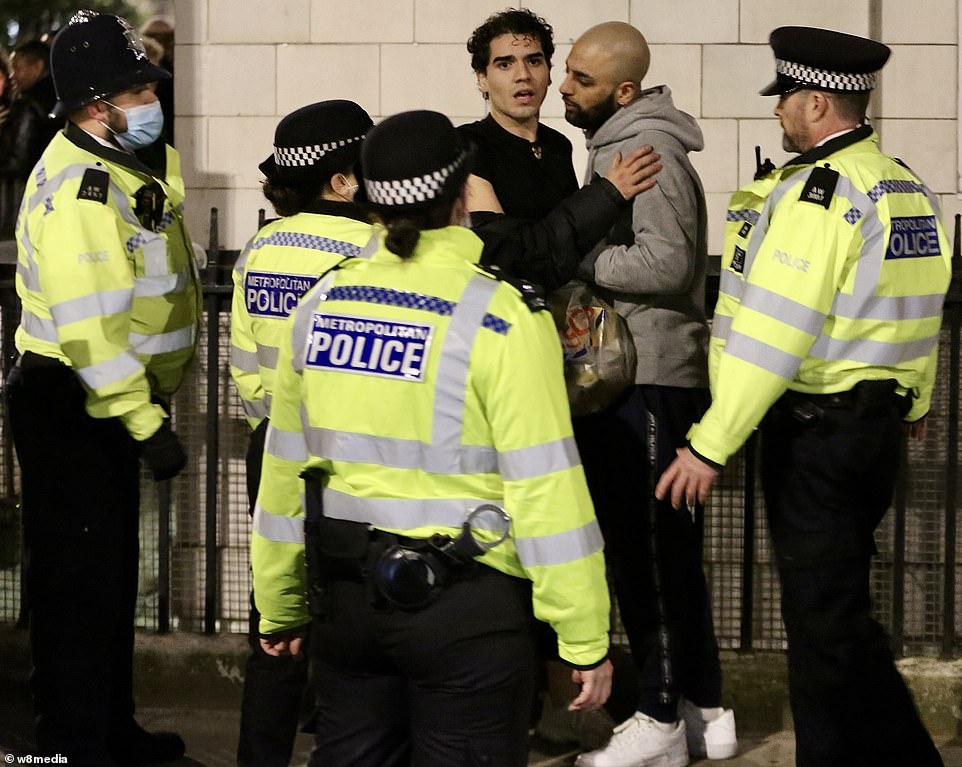 The police try to clear the streets of Soho at 11pm as pubs, restaurants and bars close after the first day open after lockdown 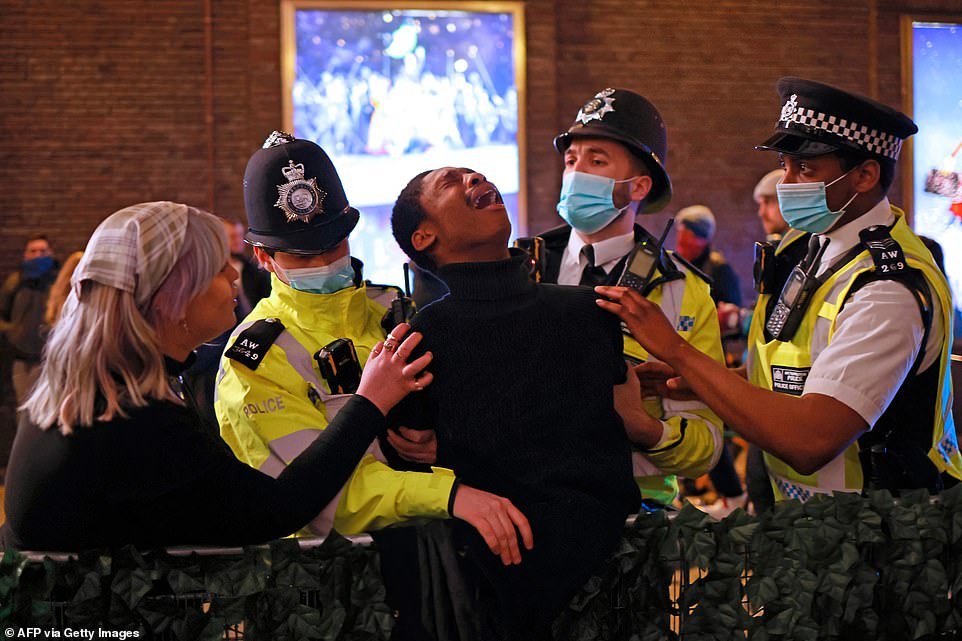 One man was seen appearing to be detained by three masked police officers, who held his arms behind his back as he was against a railing 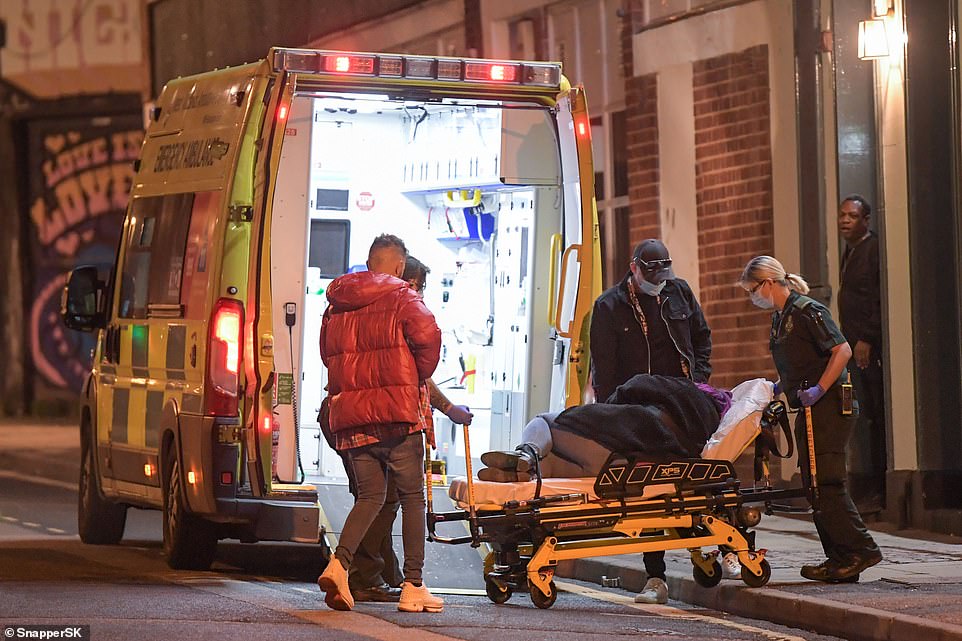 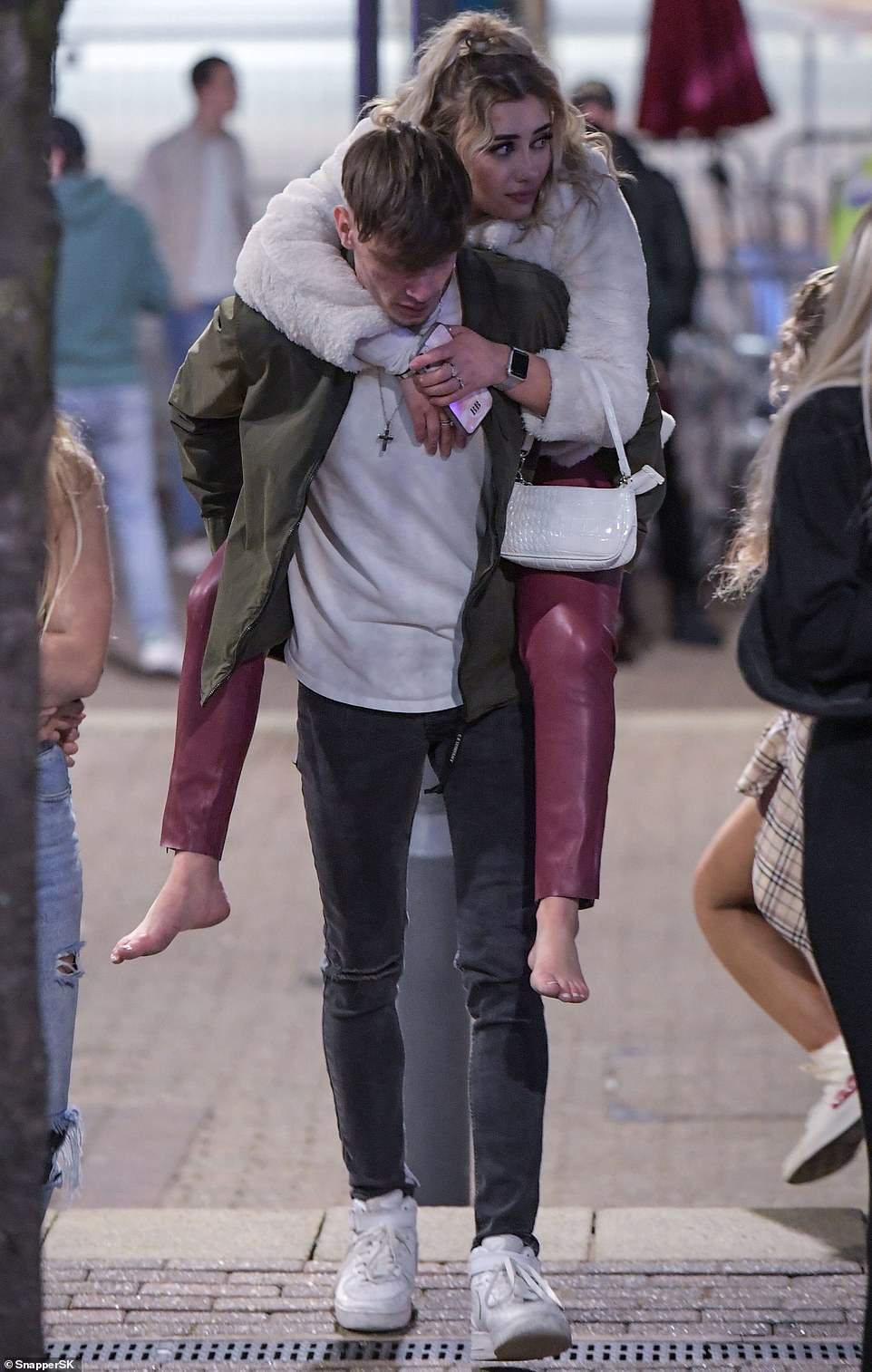 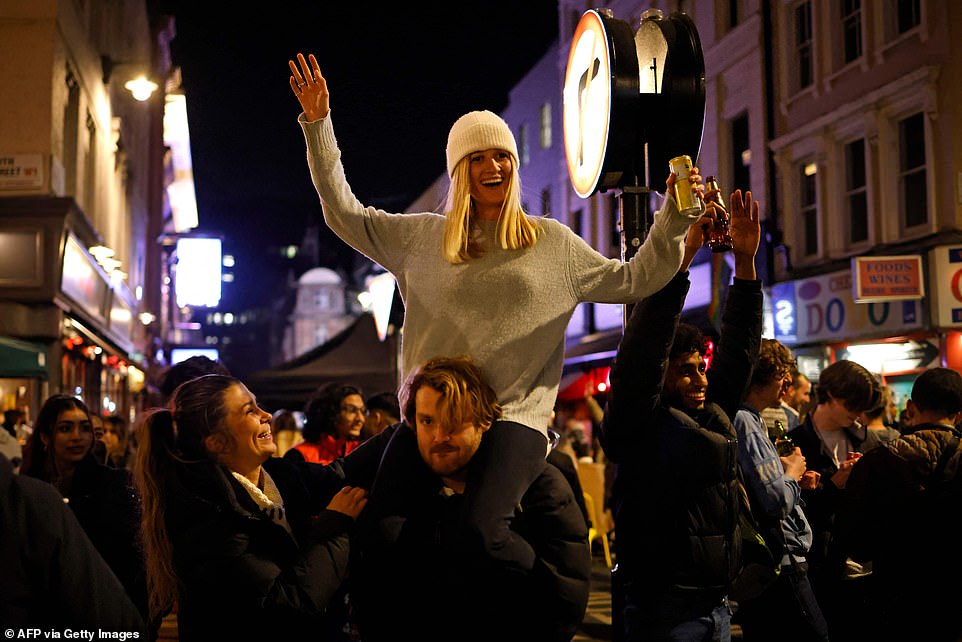 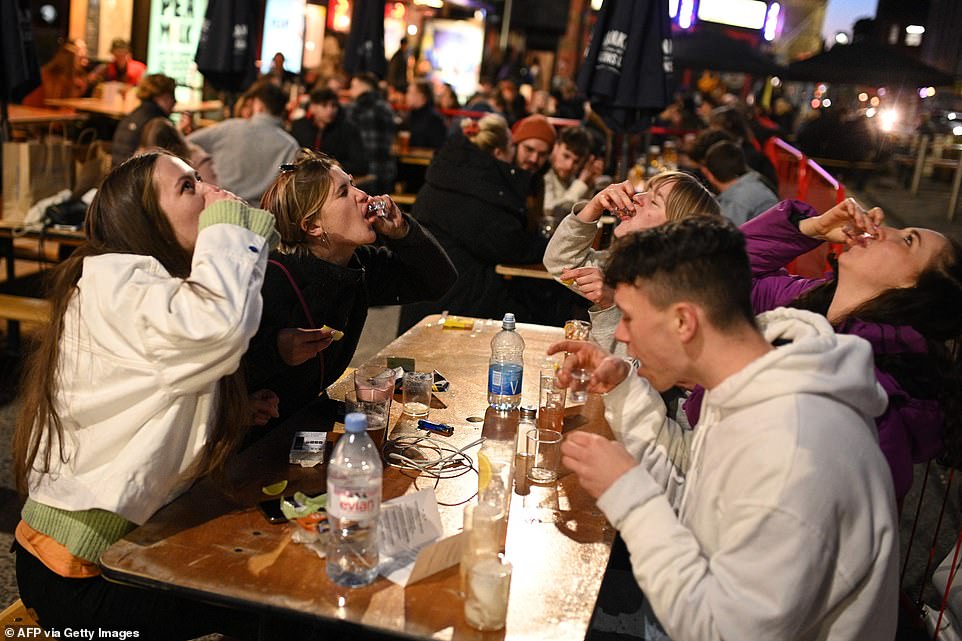 Officers tried to enforce social distancing in nightlife hub Soho – where post-lockdown scenes of chaos emerged last year as hoardes of lockdown-weary partygoers took to the streets when restrictions eased.

One man looked to have been detained by three masked officers who held his arms behind his back as he was pushed against a railing last night. The man was later seen being led away.

England – which took its next cautious step to freedom yesterday by allowing pubs and restaurants to reopen to customers outdoors – saw an increase in cases but no trend was visible in Scotland, Wales or Northern Ireland, which all have different restrictions enforced.

For some parts of the country this was the first time hospitality had been opened since November last year since they were plunged into the strict and universally unpopular tiers restrictions.

Number 10’s scientific advisers have always warned easing restrictions would cause coronavirus infections to rise by allowing people to mix together but because millions of people have been vaccinated, the NHS shouldn’t be overwhelmed.

But experts tracking England’s outbreak say none of the planned steps taken so far – reopening schools on March 8 and dropping strict stay at home guidance on March 29 – have caused any noticeable problems. 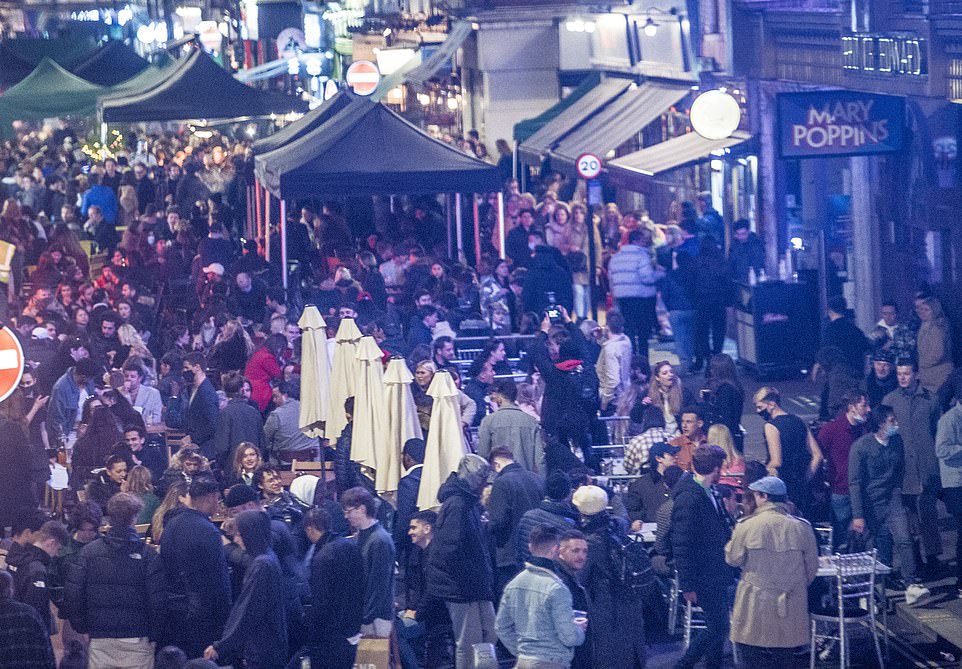 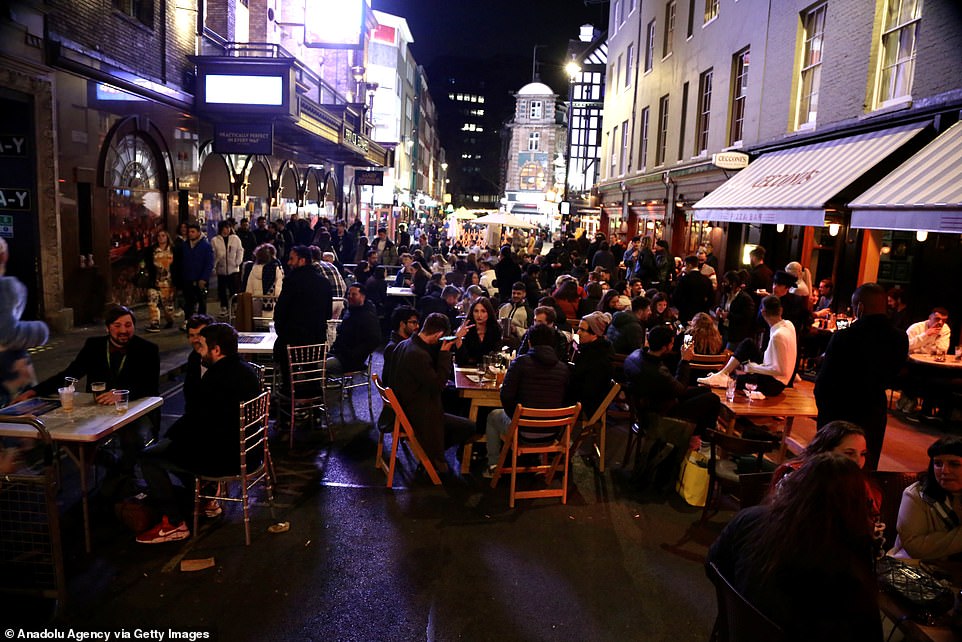 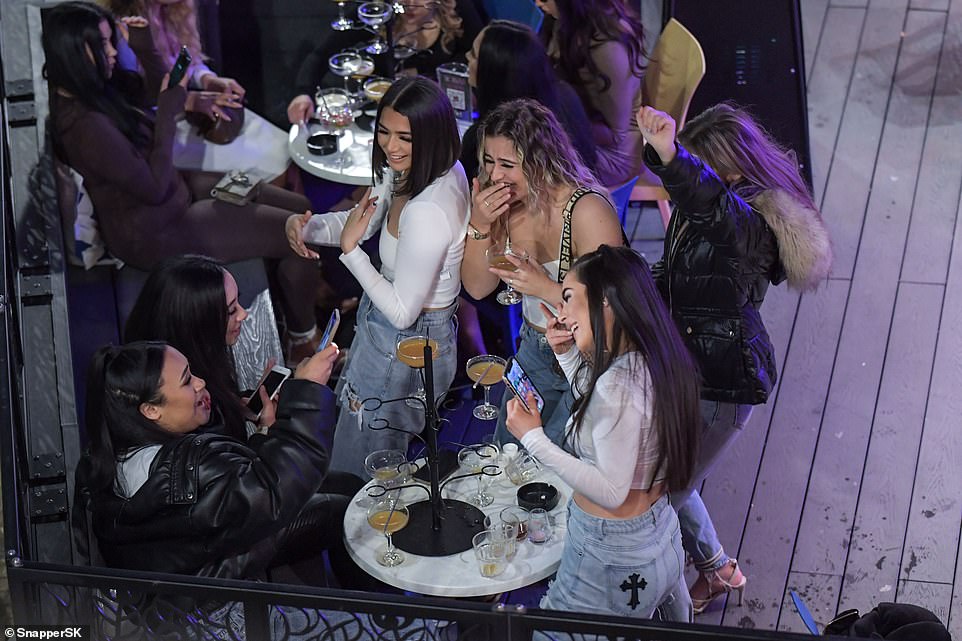 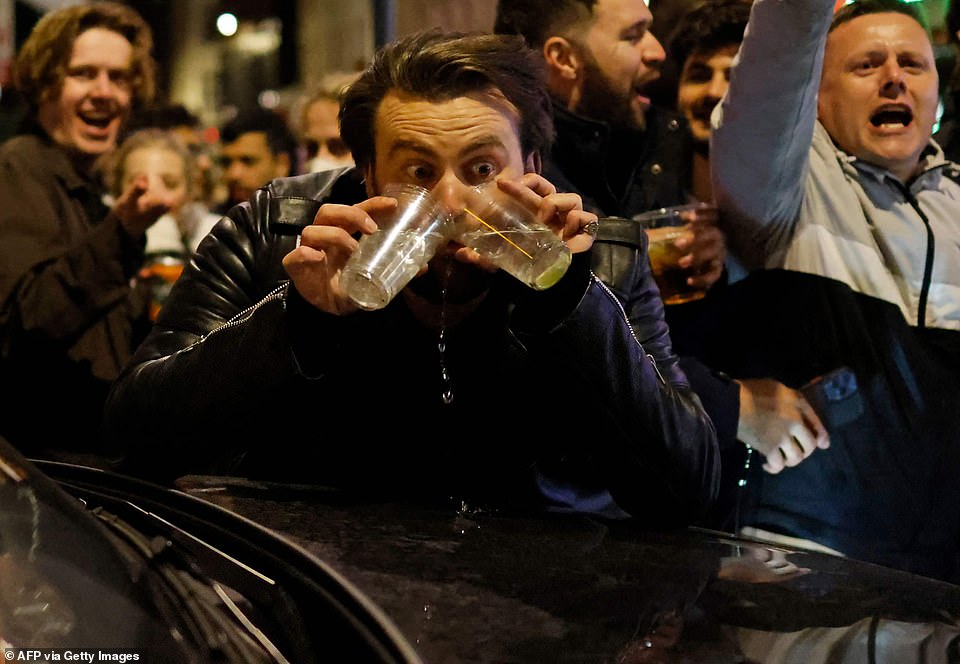 Forgotten how it’s done? One reveller was pictured appearing to inhale his two drinks through his nose as he returned to bars

Experts say it is ‘entirely possible’ the U-turn in the figures could be down to the Easter bank holiday. It takes up to seven days for people to show symptoms of Covid and get their test results back.

Revellers last weekend flocked to parks to bask in the sunshine and enjoy the first weekend of England’s eased restrictions to make the most of the rule of six to see family and friends.

Dr Simon Clarke, an infectious disease expert at the University of Reading, said the daily figure were an important reminder that the numbers are not ‘guaranteed to go down’ and that timing-wise the spike coincided with Easter.

The rise may also be explained by recording delays, with testing numbers known to dip on public holidays due to the way swabs are recorded and because fewer people come forward for them.

Meanwhile, a group of girls were seen cheering, singing and celebrating as they enjoyed their first night out in four months.

Crowds were seen gathered in Newcastle however, where pictures captured a raucous party-goer lying in the road with drink-in-hand as revellers watched on in surprise.

In Manchester and Leeds pub-goers were dressed in their glad rags as they enjoyed their first night on the town since the lockdown measures were imposed in January. 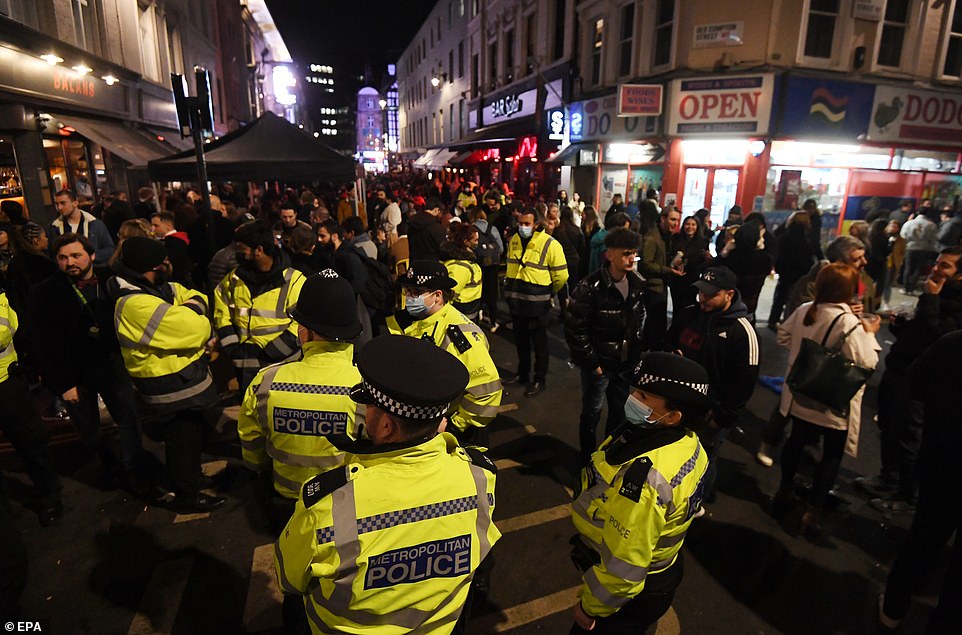 Pubs up and down the country threw open their beer gardens and outdoor drinking areas for the first time since early January, while shops, gyms and hairdressers were finally allowed to reopen. Pictured: Police attempted to maintain order in Soho last night 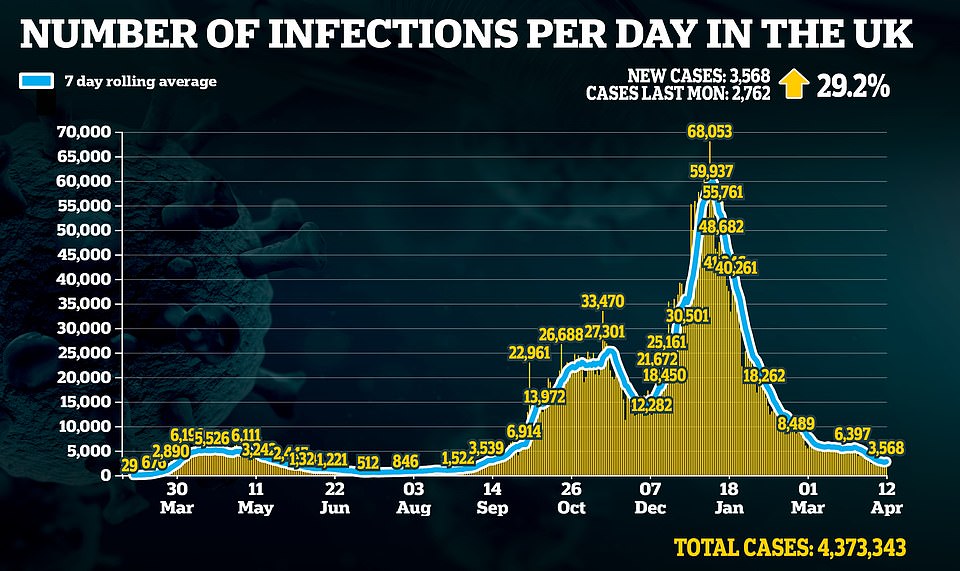 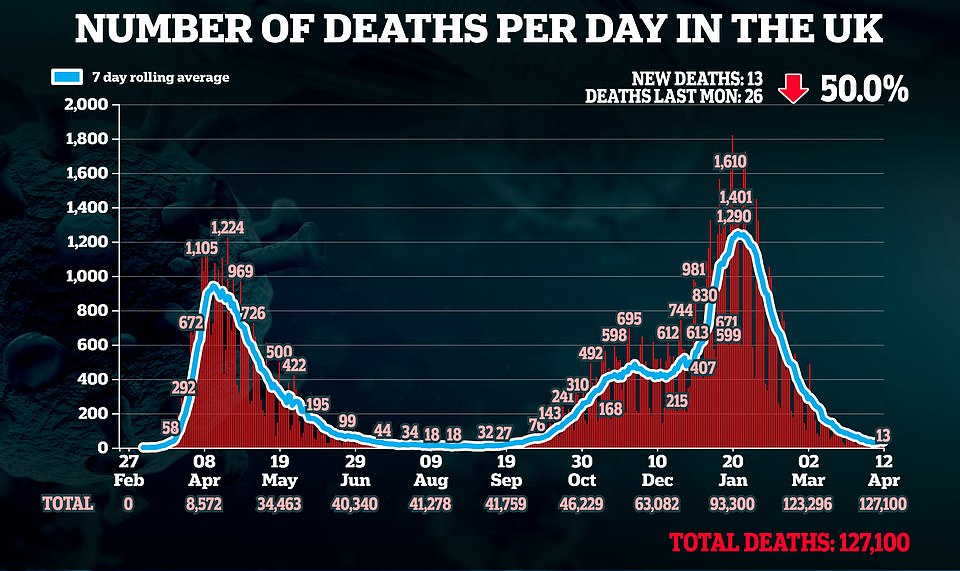 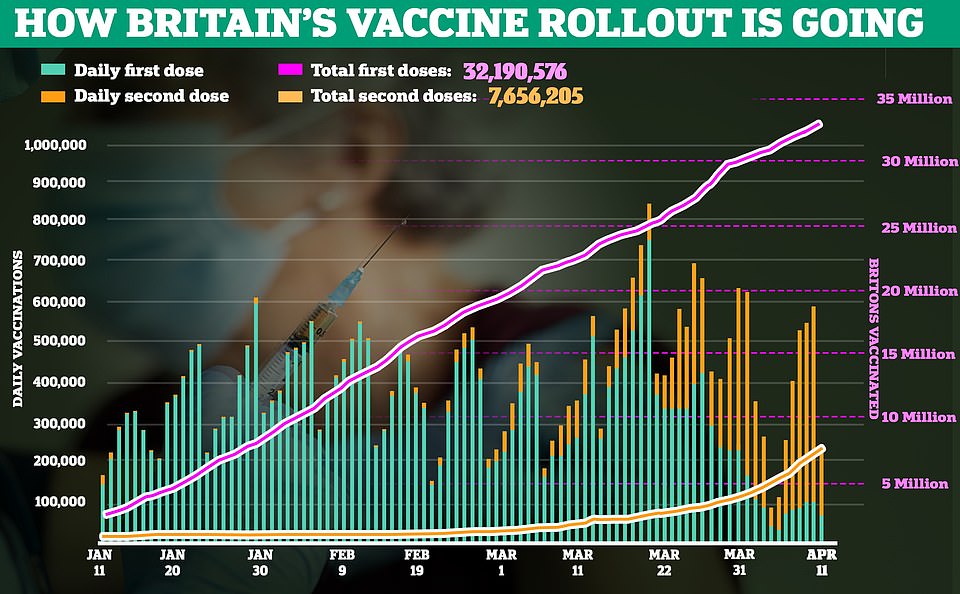 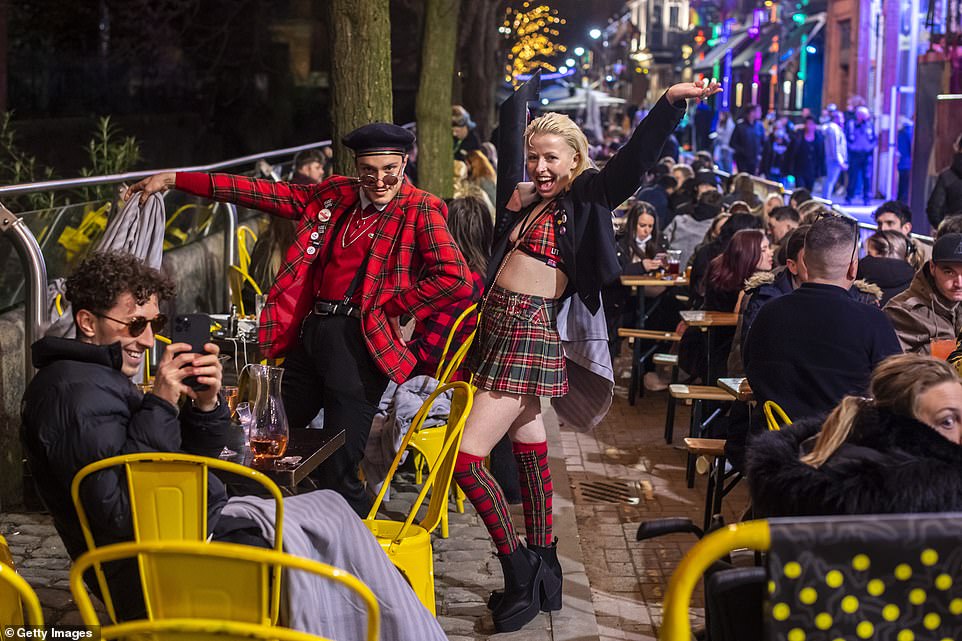 But as day turned to night, and the drinks flowed, rowdy revellers faced a crackdown from police. Officers were seen attempting to enforce social distancingi n London’s famous nightlife district of Soho. Pictured: Revellers enjoyed a night out in Manchester after restrictions were lifted 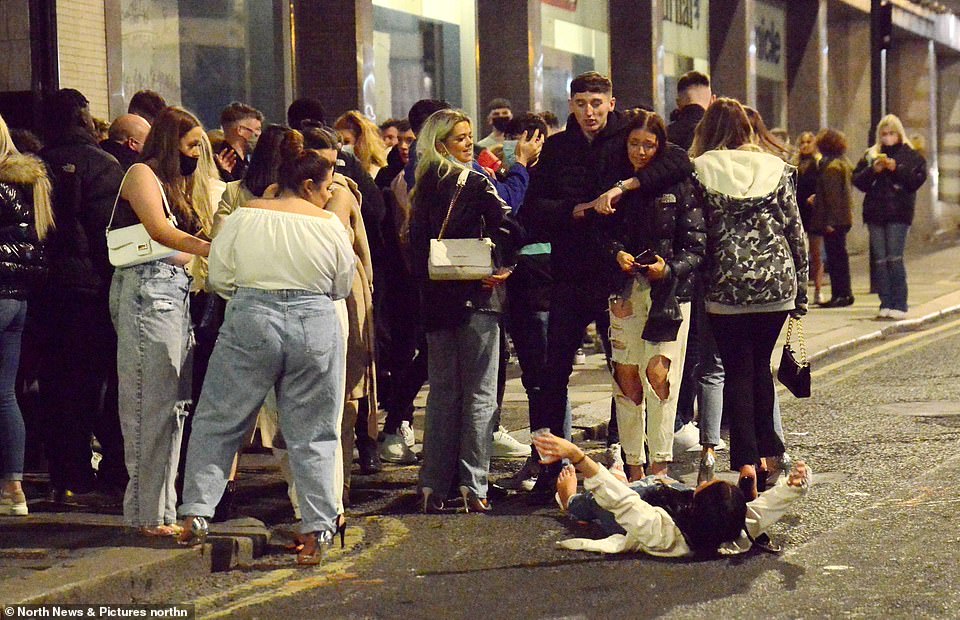 Crowds were seen gathered in Newcastle, where pictures show a raucous party-goer lying in the road with drink-in-hand as revellers watched on in surprise 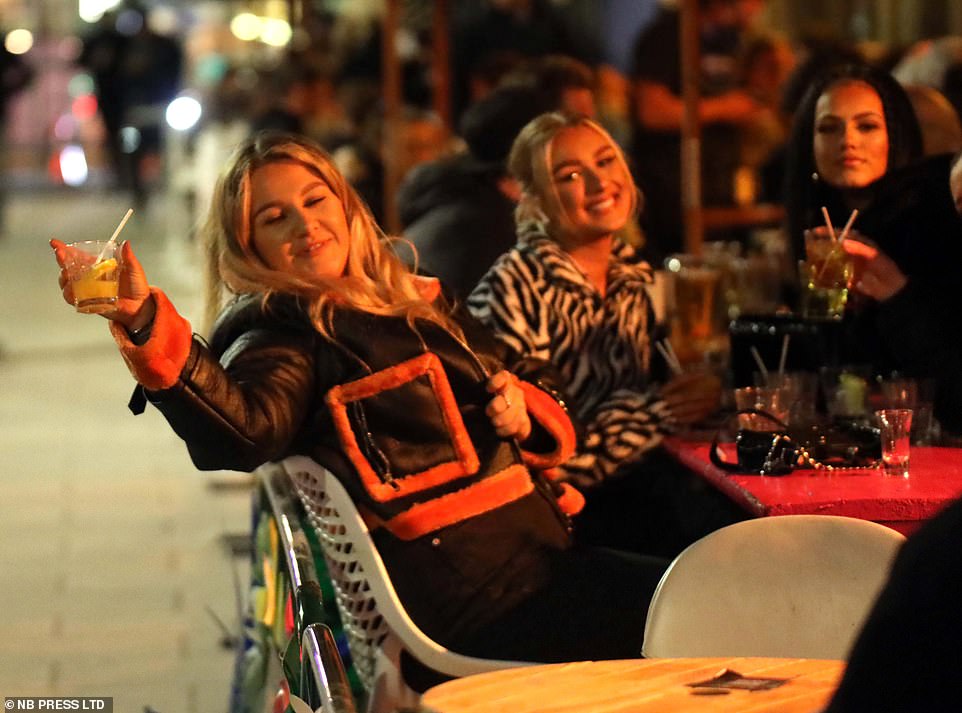 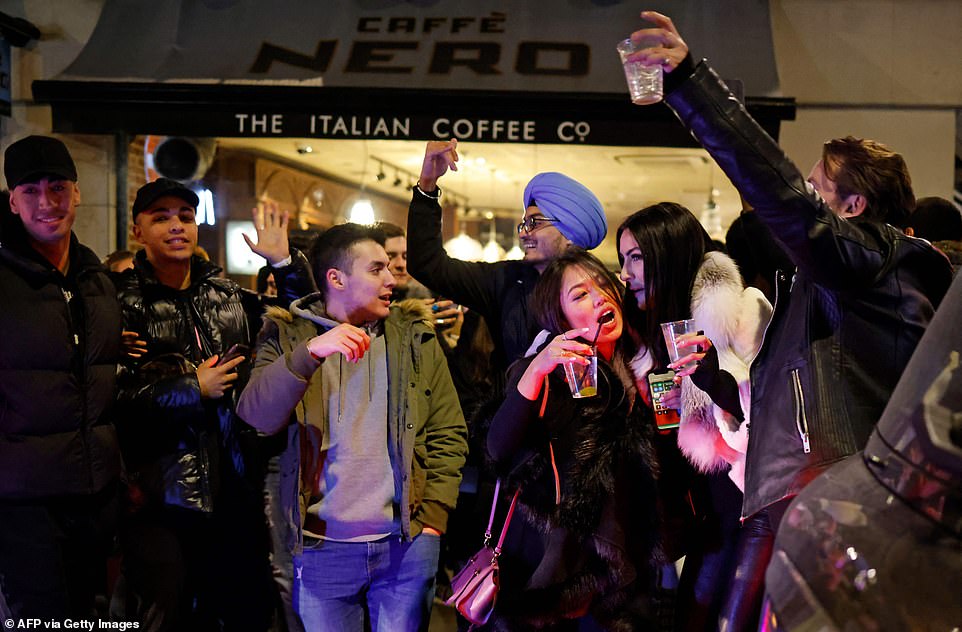 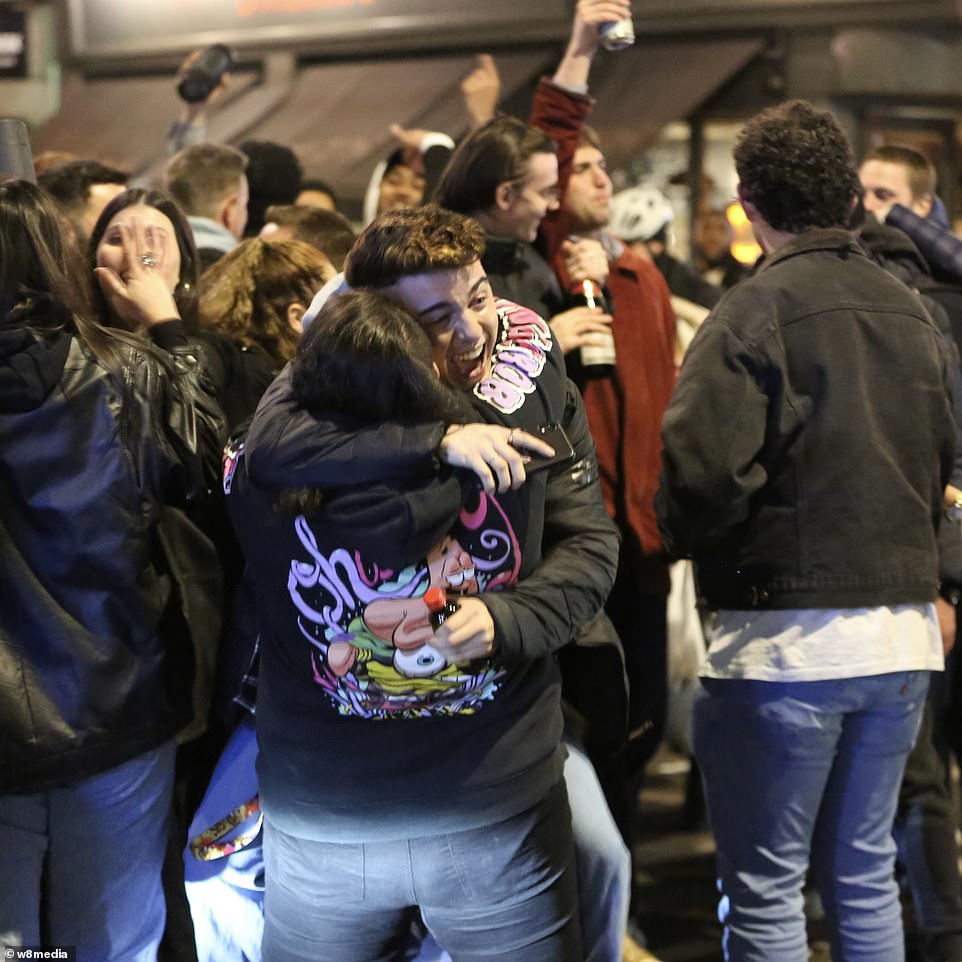 It was hugs and celebrations for revellers in Soho on Monday night, as hundreds took to the street in celebration of the easing of lockdown measures 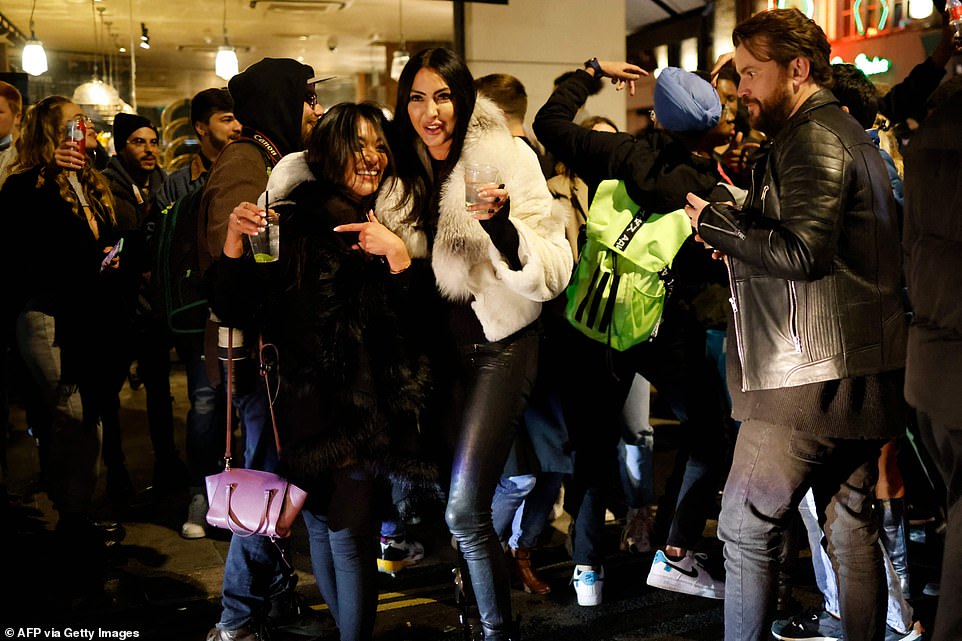 Police officers had earlier been seen patrolling popular Old Compton Street and neighbouring areas, after revellers had flocked there to enjoy al-fresco dining and drinks.

Pictures and videos being shared online show people packed onto tables laden with food and drinks, while several dozen more stood on the streets cheering the first night of pubs and bars reopening.

Attila Kulcsar, a media communications manager, said the crowds felt ‘like a return to the ‘real’ Soho of the 1990s’.

‘Tonight’s atmosphere beats the whole of last summer… it really is like how I imagine VE Day,’ the 54-year-old said.

‘It’s almost like watching Hogarth paintings come to life in 2021. There is a wonderfully raucous hysteria everywhere. It’s very celebratory.

Microsoft to acquire Nuance Communication for about £11.64 billion.

Microsoft to acquire Nuance Communication for about £11.64 billion.