Britons drank alcohol more than usual during lockdown but there was a rise in the number of people who gave up cigarettes, research has revealed.

One in six people admitted binge drinking at least once a week in April, during the darkest days of the crisis, up from one in 10 before the pandemic reached the UK. The proportion of people who turned to booze four or more times a week also rose from 14 per cent to more than a fifth (22 per cent).

At that time members of the public were banned from meeting anyone who didn’t live with them and huge chunks of the workforce were furloughed, while pubs, restaurants, shops and gyms were all shut.

The findings were based on surveys of more than 27,000 Brits by researchers from the University of Glasgow. They say people likely consumed alcohol to alleviate the ‘distress of lockdown’ and have urged ministers to consider this when rolling back restrictions this winter.

But at the same time as drinking more, Britons actually shunned cigarettes. Twenty per cent of smokers gave up the habit in April, possibly because people with respiratory issues were highlighted as being most at risk of Covid-19. 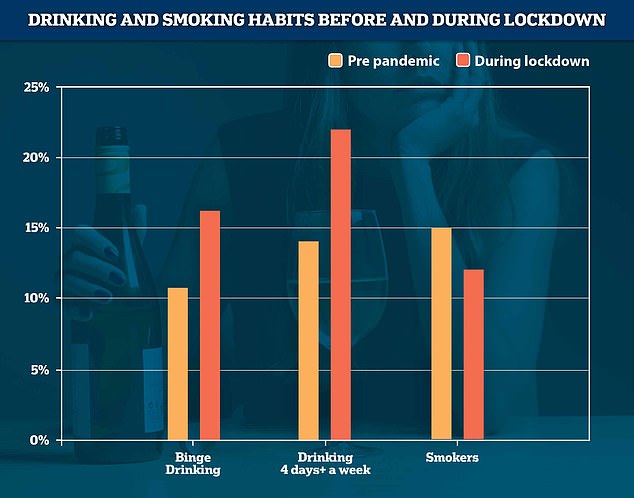 One in six people admitted binge drinking at least once a week in April, during the darkest days of the crisis, up from one in 10 before the pandemic reached the UK 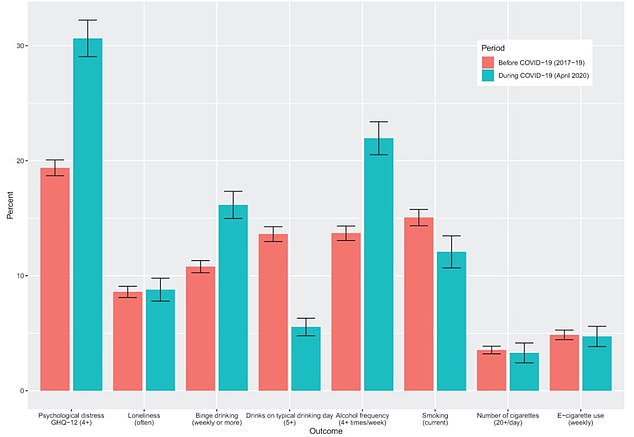 One in six Brits admitted binge drinking at least once a week in April, during the darkest days of the crisis, up from one in 10 pre-pandemic. Almost a third of people struggled with their mental health in the first month of lockdown, compared to 19 per cent the previous year. But 20 per cent of cigarette smokers gave up the habit in April 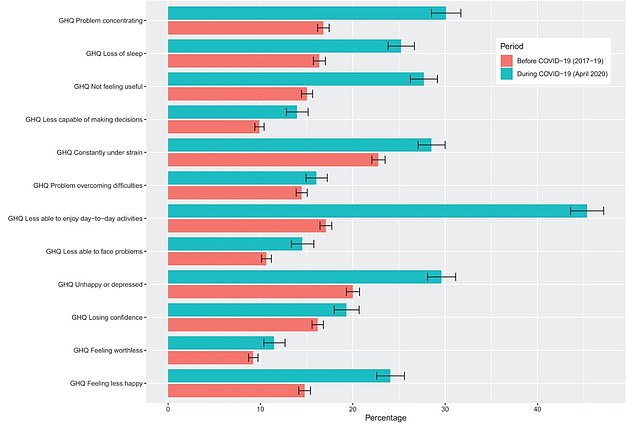 There were higher proportions of Britons feeling less happy and losing sleep during lockdown, compared to before the pandemic. At the time of the survey, people were banned from meeting anyone who didn’t live with them, huge chunks of the workforce were furloughed, business were going bust and gyms were shut

Overall across all age groups, binge drinking increased from 10.8 per cent to 16.2 per cent. The study did not differentiate between type of alcoholic drinks consumed or their strengths.

But the research, published in the Journal of Epidemiology and Community Health, found the biggest increase in was seen in those aged 25 to 44.

Before the pandemic, about 12 per cent of people in the age group admitted to binge-drinking weekly. This rose to almost a fifth by the last week of April.

There was also a sharp rise among 44 to 64-year-olds, with 18 per cent admitting to binging on booze at least once a week in April compared to 13 per cent prior to the crisis.

Half of Britons have eaten more and put on weight during lockdown, research has found.

Chocolate and biscuits were revealed as the nation’s go-to snack, while almost a third are drinking more alcohol.

Meanwhile, 42 per cent said disruption to their daily routine had led to weight gain.

But the survey by Weight Watchers also found people had good intentions when it came to adopting healthier habits as lockdown eases.

Some 46 per cent vowed to start exercising more regularly and 45 per cent wanted to lose weight when the rules are relaxed. Despite the popularity of Joe Wicks’s home workouts and YouTube yoga, the majority of people said they had exercised less and 46 per cent claimed to be less active since they began working from home.

Mental health and wellbeing has also taken a hit for many during lockdown, with one in four adults saying they had developed a more negative self-image.

More than half of women were feeling more anxious, while 18 to 24-year-olds were the most likely to feel bored. Psychologist Honey Langcaster-James said it was unsurprising lockdown had led to overeating and other unhealthy habits. She said: ‘There are so many studies that show clear links between aspects of our physical health and wellbeing and our mental and emotional health.

‘Stress, anxiety, loneliness and financial concerns can all lead to unhealthy lifestyle choices, lack of exercise and an unhealthy diet can reduce mood and overall psychological functioning. Social distancing has led many of us to become quite inactive and even sedentary.’

But she added that she was ‘delighted’ many people ‘recognise they’ve not been engaging in healthy behaviours’.

The rate remained stable in the youngest age group, aged 18 to 24, and only rose slightly in the over-65s.

The increased alcohol consumption coincided with a rise in psychological distress, the data showed.

Almost a third of people struggled with their mental health in the first month of lockdown, compared to 19 per cent the previous year.

This increase was most pronounced among working-aged people, with rates rising from 23 per cent to 37 per cent.

During the strictest days of lockdown, people were deprived of social contact and hundreds of thousands of jobs were lost, which likely fuelled the rise in mental health problems.

Asian minority ethnic groups also experienced a large increase in psychological distress, from 18.7 per cent to 34.9 per cent over the same period, although the reasons for this are unclear.

Dr Claire Niedzwiedz, from the university’s Institute of Health and Wellbeing, said: ‘Understanding the health impacts of lockdown is important, as further periods of physical distancing are likely to be necessary in many countries for some time, especially as the risk of further waves of infection remains.

‘These impacts may disproportionately affect specific population subgroups, with concerns that young people, women and disadvantaged groups may be at greater risk.

‘The increases in psychological distress and alcohol use in the UK highlight the need to consider how the potential health harms associated with lockdown measures can be mitigated, especially for those who are most at risk.’

Participants were quizzed about their drinking habits in April, at the peak of the UK’s epidemic, when 900 people were dying to the virus every day. Their answers were compared with responses given to the same questions to different Brits of similar backgrounds in previous studies between 2017 and 2019.

Binge drinking is defined as a pattern of alcohol consumption that brings a person’s blood alcohol concentration to 0.08 grams per decilitre g/dl or above.

Fifteen per cent of those surveyed were smokers before the pandemic hit, but this rate was just 12 per cent among the group quizzed in the last week of April.

Even those who didn’t outright quit managed to bring down their cigarette use slightly.

The number of people smoking more than 20 cigarettes per day decreased by 5 per cent, while those using 10 or more fell by 10 per cent.

Smoking tobacco hardens the arteries and raises the risk of developing lung and heart diseases — two major risk factors for coronavirus.  Hospital records indicate that smokers are more likely to fall severely ill with Covid when they catch it.

It comes after police, scientists and politicians joined forces yesterday to call for Boris Johnson to rethink the controversial 10pm curfew amid claims it does ‘more harm than good’.

Andy Burnham, the mayor of Greater Manchester, demanded an urgent review of the rules which he said had led to people buying drinks in off-licences and holding house parties.

On Friday the pub curfew contributed to a fall in footfall on high streets of 55 per cent after 11pm, analysts Springboard said.

Mr Burnham’s warning came after footage circulated of crowds in city centres across the country on Saturday night, with people piling on to public transport and queuing to buy more alcohol.

‘I received reports that the supermarkets were absolutely packed out to the rafters with people gathering,’ the mayor told Radio 4’s Today programme.

‘That is the opposite of what our local restrictions here are trying to do. I don’t think this has been fully thought through.’ Mr Burnham suggested one option could be to impose a 9pm curfew on alcohol sales in shops to prevent the rush to off-licences after the pubs close.

Scientists said ministers should have foreseen that closing bars and restaurants earlier would lead to a build-up of crowds and busier public transport.

It came as it emerged that only 3 per cent of coronavirus outbreaks investigated by Public Health England were due to people gathering in bars and restaurants.

Covid: What is self-isolation and who has to do it?

Do I need to take PTO to vote? Ask HR

Do I need to take PTO to vote? Ask HR