Britons drink 120 bottles of wine or 400 pints every year on average but consume less alcohol than the French, Germans and Spaniards, data revealed today.

An Organisation for Economic Co-operation and Development (OECD) report has called on governments around the world to do more to tackle binge drinking.

It claims each Briton drinks roughly 4.4 pints of beer or 2.3 bottles of wine on average each week, placing it 16th out of 44 wealthy nations analysed across the world. Britain came ahead of Brazil, Japan, China and the US, which ranked 21st.

But the data suggests people in most of Europe’s major nations all drink more than Brits — despite the UK being shamed for decades for its binge-drinking culture. However, the same report did find that tend to binge drink more than most other nations.

Latvia is the biggest drinking country in the world, with men and women on average drinking a staggering 512 pints a year — nearly 10 per week.

Alcohol charities today slammed the shocking statistics and called on Westminster increase regulation of alcohol marketing in the UK to reduce the ‘suffering’ caused by  drinking. 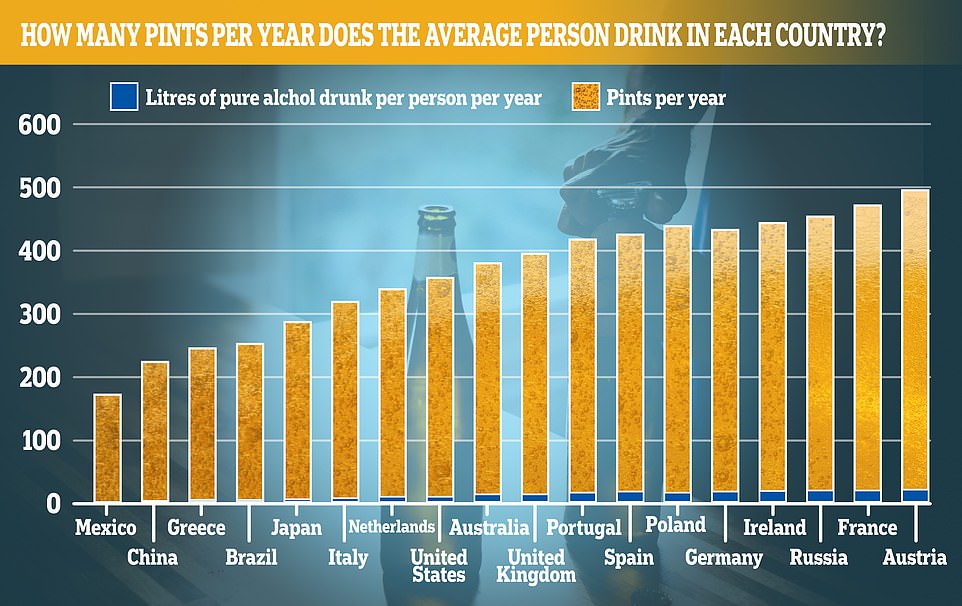 Britons drink 120 bottles of wine or 400 pints every year on average but consume less alcohol than the French, Germans and Spaniards, data revealed today

The OECD report uses data from its own health statistics database from 2018, except in the case of Italy, Mexico, the US and Australia, for whom slightly older dates were used.

It suggests Britons drink slightly more than the OECD average amount of pure alcohol per year — 9.8 compared to 8.7 litres.

Pure alcohol is measured as one millilitre for every percentage of the drink’s strength if there is 100ml of it. A litre of 37.5 per cent vodka, for example, contains 375ml of pure alcohol. While a pint of five per cent strength lager would contain 28.4ml of pure alcohol.

Americans drink slightly less, consuming 8.9 litres of pure alcohol a year. This works out at a four pints a week or 2.1 bottles of wine.

But Brits tend to binge drink more than most other nations, with 51 per cent of all alcohol consumed in the country drank by heavy drinkers — defined as drinking two pints for men or one pint of beer for women per day by the OECD. Mexico had a slightly higher rate of 54 per cent.

Some 30 per cent of adults in Britain engage in binge drinking at least once a month. Bingeing is defined as drinking more than 80 per cent of a bottle of wine or three pints of beer per session.

Women are 21 per cent more likely to binge drink monthly if they have completed higher education, the data showed.

In the US the proportion of alcohol consumed by heavy drinkers is 35 per cent and in France it is just 31 per cent.

A spokesperson for the OECD, an international organisation which studies the economies and populations of developed countries, said: ‘Alcohol can be a source of enjoyment and is an important part of the economy in many countries.

‘Yet harmful alcohol use is a leading risk factor for premature death, injuries and many noncommunicable diseases. 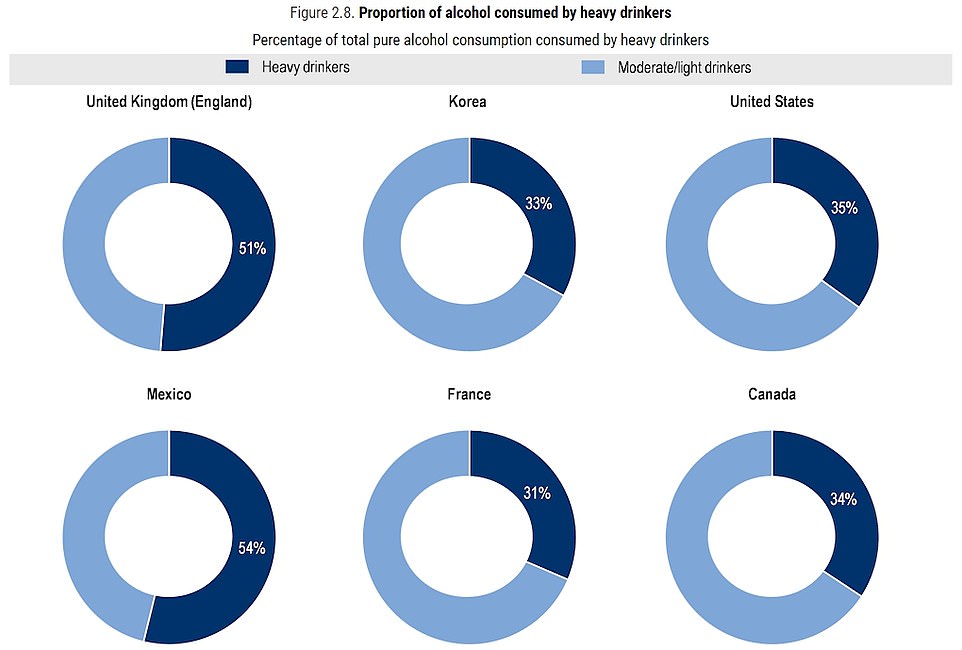 ‘Harmful alcohol use can also affect others, for example in the case of violence and foetal alcohol syndrome.

‘These diseases and injuries, in turn, have an impact on healthcare budgets and the productivity of the labour force.’

The report also showed Brits are as enamoured with beer as they are wine, with 36 per cent of all alcohol drunk in the country being ale, lager or stout and 34 per cent wine — compared to 24 per cent spirits.

He said: ‘This report shows again what we already knew: alcohol causes too much harm here in the UK. It causes untold suffering to millions across the country – to people who drink, but also to their kids, partners, parents – to their whole communities.

‘Every year in England alone the NHS spends £3.5 billion cleaning up after the multi-billion-pound alcohol industry.

‘The heartbreaking thing is that all of this harm is avoidable. This report shows that there are policies the government can put in place – right now – that will save the NHS money and save lives.

‘These are policies like proper regulation of alcohol marketing, and sorting out alcohol pricing and tax so that litres of strong alcohol can’t be bought for pocket money prices.

‘The Scottish and Welsh governments are already taking action – it’s time for Westminster to catch up and end the avoidable harm.’

Jon Murray, executive director of services in England at drug, alcohol and mental health charity With You, said: ‘These figures are concerning, especially when you consider that the number of people in treatment for an alcohol issue has fallen by nearly one fifth since 2013 to 14, with an estimated four out of five dependent drinkers not accessing any kind of support.

‘Often isolation and heavy drinking go hand in hand, so it’s unsurprising the enforced isolation of the pandemic has led to some people drinking more.

‘Heavy drinking is often a way of dealing with mental health issues or a reaction to something else going on in people’s lives.

‘For example, in recent years we have seen a rise in the number of older adults with an alcohol problem, often in response to life events like divorce, retirement or bereavement. People can get stuck in a cycle of drinking to deal with these types of issues, with their alcohol use actually exacerbating these issues in the long-term.’

It comes after official data last month showed alcohol-related deaths in England and Wales hit a record high in 2020 amid the coronavirus pandemic, with the greatest increase was among middle-class women.

An Office for National Statistics report published today revealed there were 7,423 fatalities linked to drinking last year, which was a fifth more than in 2019 and the highest number since records began in 2001.

Alcohol-related deaths have been rising for decades. But they rose quickest from March 2020 onwards, after the first national lockdown came into force, and got progressively worse as the year went on.

Shohei Ohtani struggles with reduced velocity in loss to Cleveland

Boom Supersonic: 'Anywhere in the world in four hours for $100'