A ‘broke’ student has revealed how she managed to live the high-life in London and meet hoards of celebrities while she was on a tight budget at university.

Dalia Wainwright, 22, from London, took to TikTok to share her top tips for enjoying a lavish life in the capital all on a student budget with a ‘minimum wage’ job.

She revealed how she visited upmarket venues such as as Duck and Waffle in the small hours of the morning to enjoy its cheaper late-night menu; drank a £3 coffee at the cafe at The Shard with the same views as the £32 viewing platform, and ordered cheaper mocktails at The Aviary.

Dalia said she has managed to meet celebrities, including Love Islanders, Stefflon Don and Rosie Huntington-Whiteley, by attending beauty events that anyone can get a ticket to, or going to VIP clubs where there’s free entry for women.

She even once cheekily faked  aproposal with a friend to land free cocktails at a restaurant. 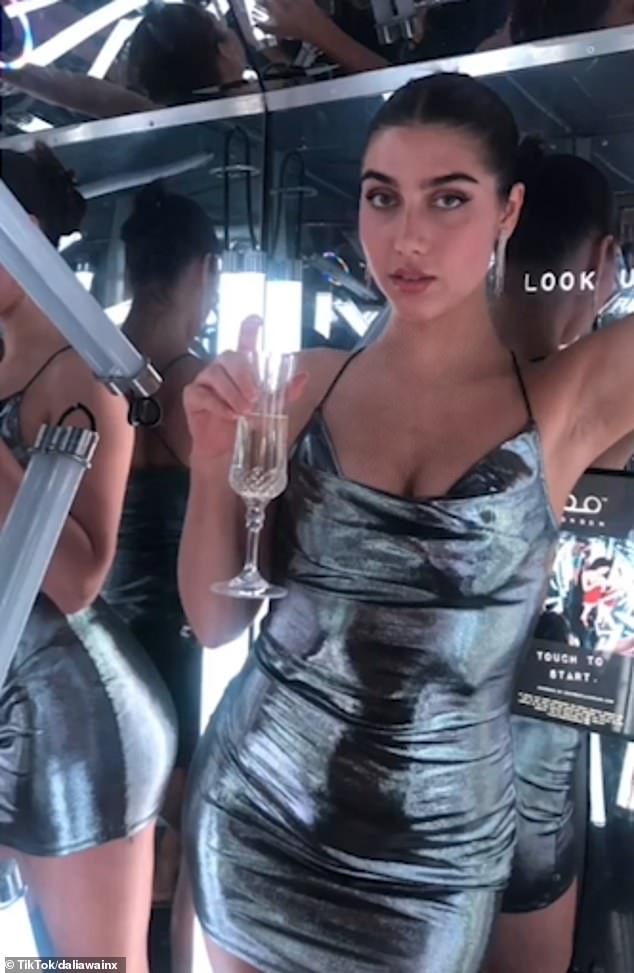 Dalia Wainwright, 22, (above) from London, took to TikTok to share her top tips for enjoying a lavish life in England’s capital all on a student budget with a ‘minimum wage’ job

She also revealed some of the ‘expensive’ venues that she enjoyed nights at without splashing out, including The Shard, Duck and Waffle and The Aviary.

In her first video, she said: ‘I’m going to share my secrets of how I managed to live a semi-boujee life in London, meet loads of celebrities all while on a student budget and a minimum wage job.

‘So the first thing about London is that there are so many random events you can go to.’

The savvy student revealed that she attended a Love Island event where she bagged cocktails, dinner and dessert, which were all free, and meet reality show stars Amber Gill and Anna Vakili.

She revealed she has also met an array of Love Island stars at nightclubs, but refused to name any of them because she claimed they were not ‘as nice’ as Anna Vakili.

Dalia also got to rub shoulders with model Rosie Huntington-Whiteley after her friend bought her a ticket for an event run by beauty brand Hourglass. 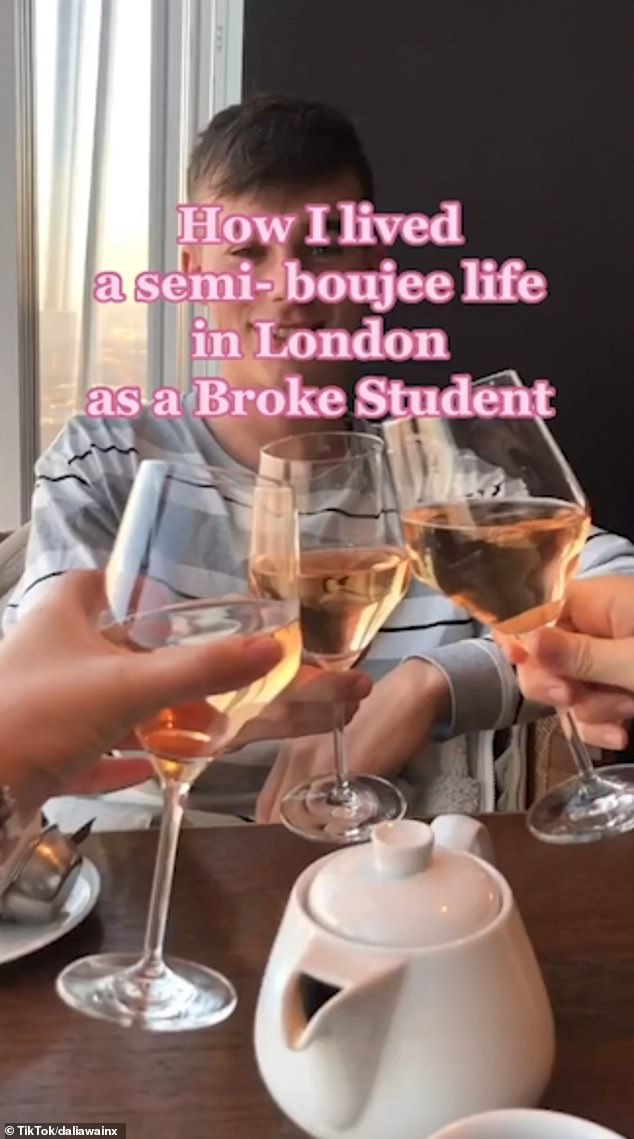 The ‘broke’ student (above) revealed how she managed to bag free cocktails, cheap tickets, bargain ‘fancy’ meals and meet celebrities, including Stefflon Don and Anna Vakili

Dalia said that she enjoyed discounted Hourglass make-up and free champagne and cocktails before meeting Rosie, 33.

She added that a great way to meet other famous faces is to head for a night out at Mayfair clubs, where she got free entry and drinks before sneaking into the VIP area to meet rapper Stefflon Don.

Dalia explained: ‘I’m sure everyone knows this but there are so many celebrities at Mayfair clubs and if you’re a girl you get free entry, free dinner before, free drinks all night long.

‘And if you’re clever like me you can sneak into the VIP and meet celebrities like Stefflon Don.’

Dalia also advised students to keep an eye out for free events advertised by their University, revealing she surprisingly got to meet Princess Anne at an event in her university’s library. 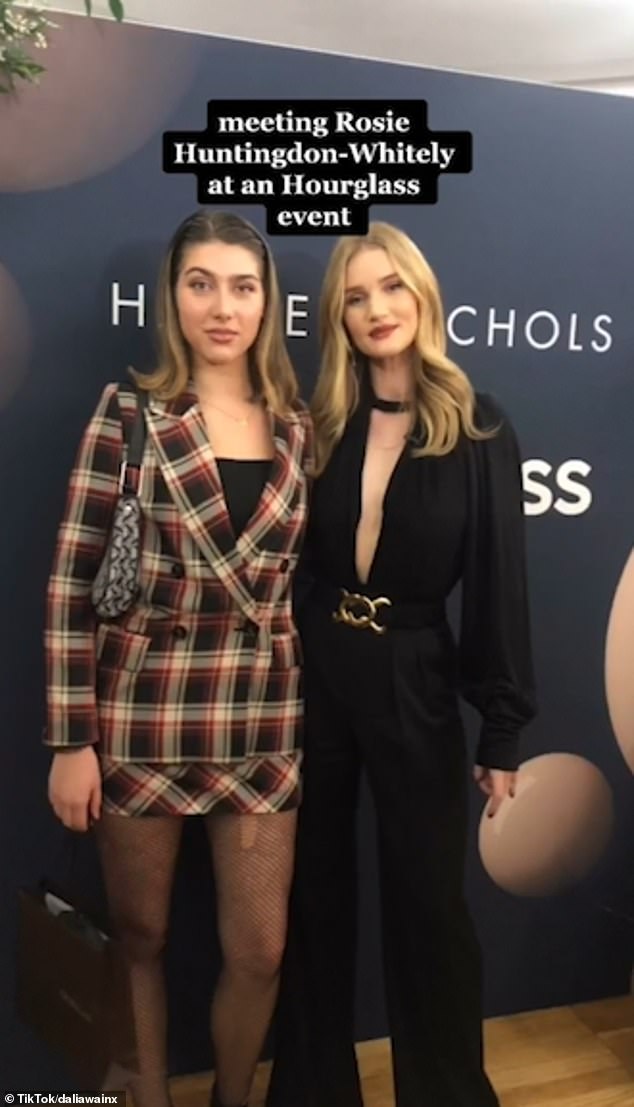 Dalia met model Rosie Huntington-Whiteley (both above) after her friend bought her a ticket for an event ran by beauty brand Hourglass, where she was also given discounted make-up

In her series of TikTok videos, Dalia also gave her top tips for wining and dining at ‘expensive’ bars and restaurants without having to spend the big bucks.

She admitted that she would often go to The Shard and, rather than paying £32 to visit the viewing point, she would simply pay £3 for a coffee at Oblix.

Dalia assured people that the views were just as incredible, adding: ‘If you go after Uni at like 4pm it’s normally so empty you can just sit by a window and take pictures and chill.’

Another posh eatery she dined at was Duck and Waffle, where she would rock up at 3am to enjoy their ‘affordable’ nighttime menu, which included a £12 mac and cheese.

The cunning student also said she managed to bag free cocktails at the restaurant when her friend pretended to propose, while they also gave her free cake on her birthday.

Another fancy restaurant where she found bargain deals was Brasserie Zedel, where she would indulge in their tasty £10 meal deal, which included a main and a dessert. 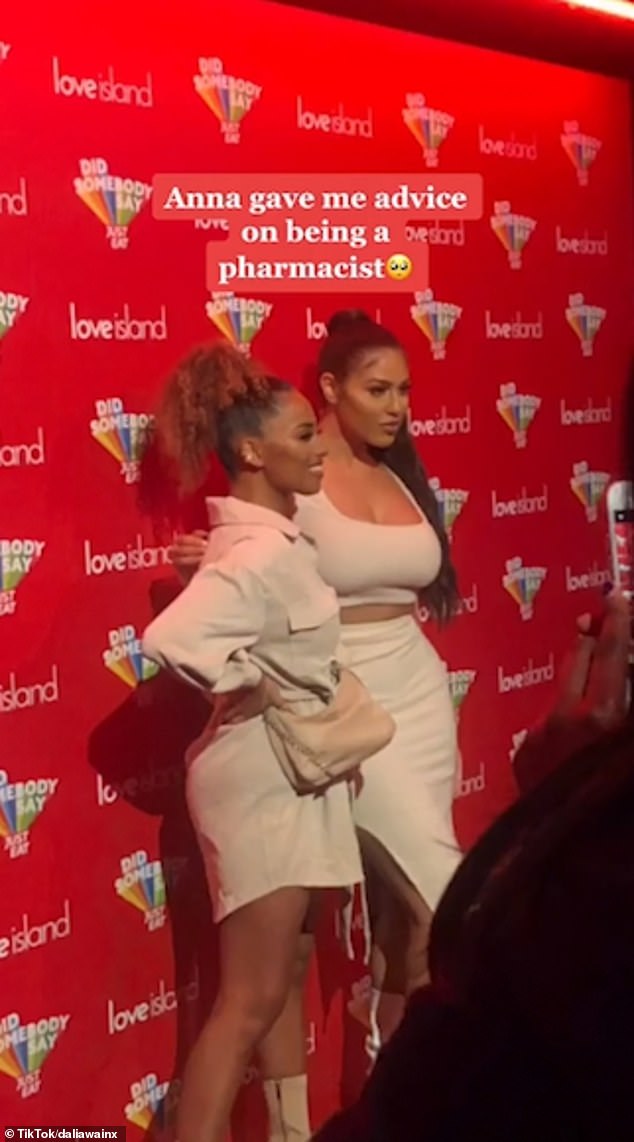 The savvy student also said she attended a Love Island event where she got free cocktails, dinner and dessert and meet reality show stars Amber Gill and Anna Vakili (both above)

Another of Dalia’s top tips was buying mocktails at fancy bars, including Sketch and The Aviary, to both save money and ‘be sensible’ after a night out.

She also advised that students could visit London’s popular venue Sky Garden and the Tate Modern for an enjoyable day out without spending a single penny.

Dalia explained: ‘I’m sure everyone in London has heard of this one, but if you’re new to London or moving to London soon, then Sky Garden is this insane rooftop bar that is basically a jungle and drinks are expensive but entry is free.

‘You don’t have to buy anything, you can just enjoy the views.’

She went on to say that the Tate Modern offers a fun-filled monthly event called Tate Lates, which is held after closing hours and sees a DJ perform in the museum. 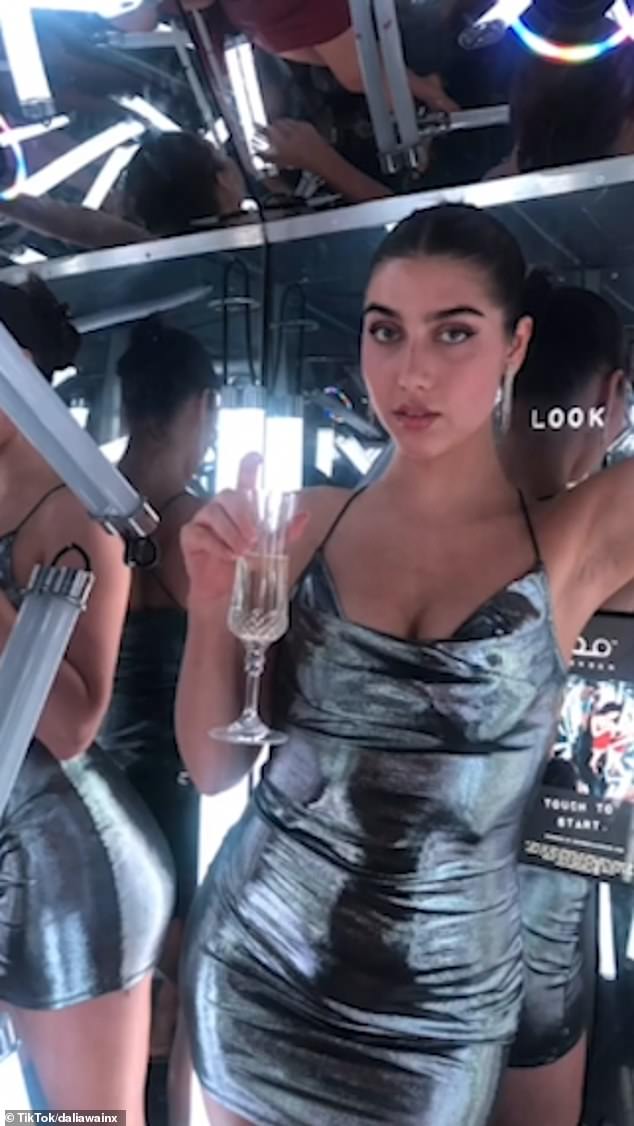 In her TikTok videos, Dalia (above) also revealed her top tips for enjoying ‘expensive’ eateries, including The Shard, Sketch and Duck and Waffle without having to spend the big bucks

And for only £3.50, she revealed that broke students could enjoy stunning views on Greenwich’s Emirates cable cars and simply pay the cost on their Oyster cards.

But Dalia admitted that it can sometimes be difficult to find friends in a big city like London, and urged people to ‘make an effort’ to try and get to know new people.

She revealed that she has managed to visit Kosovo, The Netherlands and Malta on a budget after making friends with people from all across the globe.

Dalia said: ‘You really have to make an effort to make friends in London because it’s such a huge city and there are so many people.

‘But the people that you do meet are so much fun and they’re so diverse and they’re all from different countries and if you’re lucky they’ll invite you to stay at their home countries during the holidays.’

Lukashenko calls for a discussion of Belarus’ abandonment of neutrality