Bruno Fernandes: Manchester United are close to the championships with Ronaldo 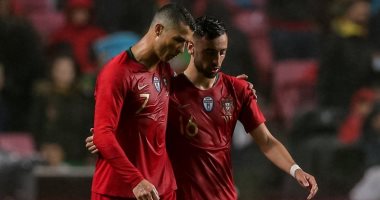 Portuguese Bruno Fernandes revealed that the Manchester United stars are very happy and believe that the return of legend Cristiano Ronaldo to the club has boosted their chances of winning the title this season.

In the closing days of the summer transfer window, United managed to bring club legend Ronaldo back to Old Trafford just as it looked like they were headed for Manchester City.

United paid Juventus £12.8m, which could rise to £18.5m, for Ronaldo, and he even got his old number 7 shirt after Edinson Cavani agreed to leave the iconic number and wear the number 21.

Bruno told Manchester United channel: “We know the enthusiasm will be very hot, everyone knows we have Cristiano, everyone is very confident and happy to have him back, and the players too. [بالبطولات]”.

Ronaldo took part in his first training session on Tuesday, having arrived at Carrington ahead of schedule after leaving the Portugal camp early due to a suspension for the last game of the international break.

The 36-year-old is now in contention to make his club debut against Newcastle United on Saturday.

Boost your immunity and keep your heart healthy.. Know the benefits of citrus fruits