Bruno Fernandes: We all know what Ronaldo will bring to Manchester United 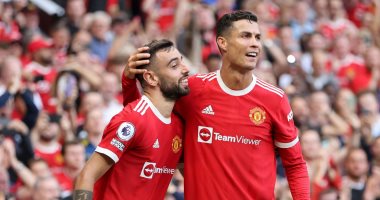 The Portuguese midfielder, Bruno Fernandes, highlighted the importance of the club’s contract with his compatriot Cristiano Ronaldo, after the double scored by the “Don” against Newcastle during the match hosted by (Old Trafford) today, Saturday, in the fourth round of the English Premier League football. “Premier League”“.

Bruno, who scored his team’s third goal in the match, said: “It would have been a perfect match if we didn’t concede. We are very happy with the victory, and the game was very good overall. Newcastle were very organized and defended well, but we moved the ball quickly and waited for the right moment. to sign up“.

Bruno praised Ronaldo, adding: “Everyone knows what Cristiano will bring to this club. We are very happy with him. The result of the match is the most important for the team, but good players will always play well with each other.“.

Ronaldo opened the scoring for Man United in the (46th) s, and Javier Manquiio equalized the ball for the guest in (56th)..

Only six minutes later, the “Don” added his team’s second goals, and in the (80th) Bruno scored the third goals (the Red Devils) with a wonderful shot from outside the penalty area to the right of the goalkeeper, and Jesse Lingard concluded his team’s goals and the match in the (92nd s)..

With this result, Manchester United leads the English Premier League table after raising its score to 10 points, combining them from 3 victories and a draw, while Newcastle United occupies the nineteenth and penultimate place in the standings table with one point.

It is scheduled to meet Manchester United with the Swiss Young Boys next Tuesday in the start of the group stage of the Champions League.