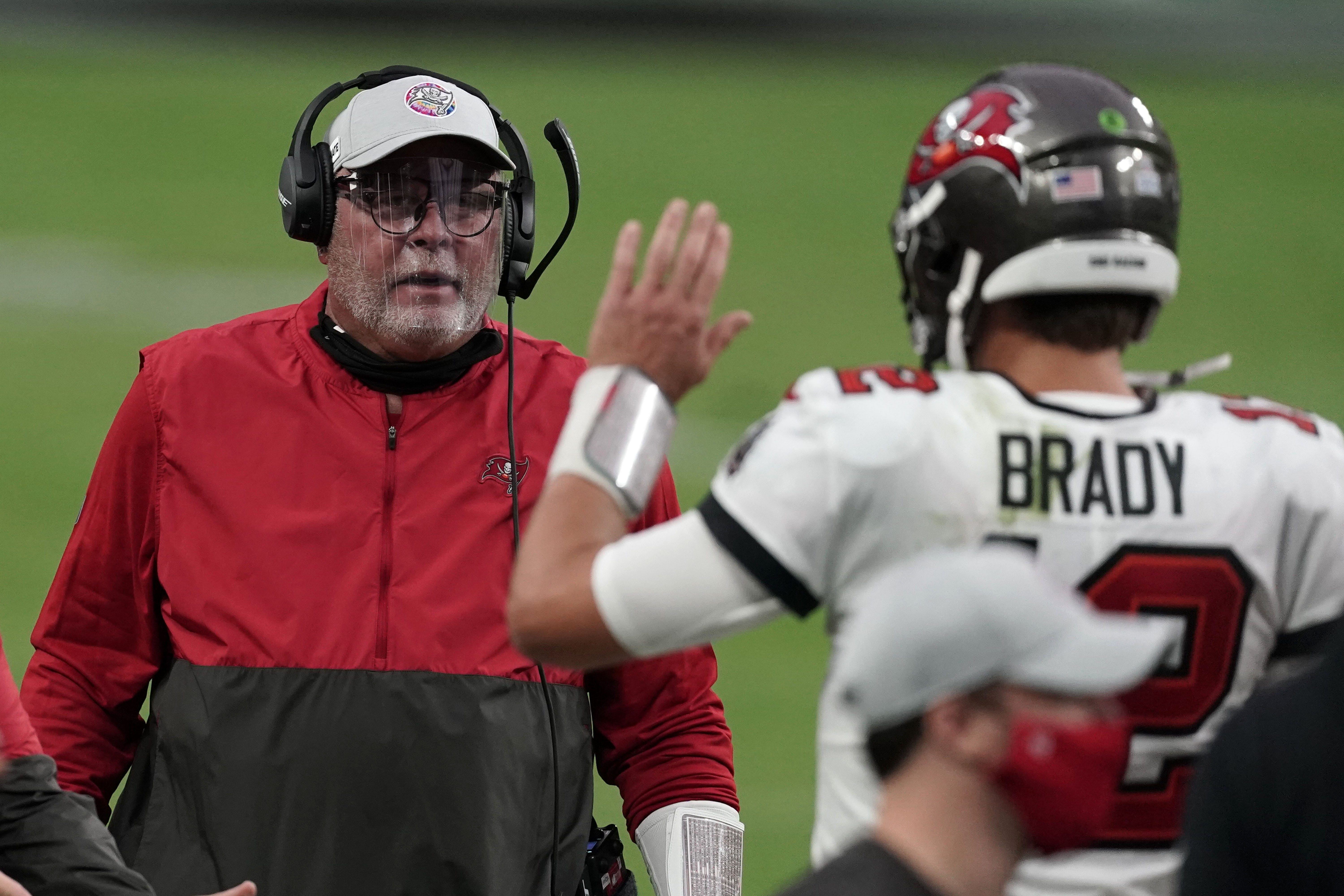 LAS VEGAS – Bruce Arians was just off The Strip on Sunday when his team dismantled the Las Vegas Raiders and his new-old quarterback, Tom Brady, had his best game of the season.

And the really big buzz was about Antonio Brown.

Hey, that’s life on the NFL radar. Brown was nowhere near the premises at Allegiant Stadium, but after the former All-Pro receiver agreed on Friday night to bring his baggage to the Bucs, inquiring minds needed to know how they plan to roll with this.

What a logical, football-centric conclusion, given the fickle nature of the NFL. Injury stuff happens.

Arians maintained that sentiment even with the assortment of weaponry that was on full display as the Bucs (5-2) ran roughshod in a 45-20 victory against the Raiders. In passing for 369 yards, Brady threw his four touchdowns to four different targets. Scotty Miller, the 2019 sixth-round pick, had his first 100-yard game and a sweet, over-the-shoulder grab for a 33-yard TD on what was arguably Brady’s best dime as a Buc. And Leonard Fournette, healthy again, caught six passes out of the backfield. Chris Godwin, as usual, was clutch again and again. The best wideout, Mike Evans, didn’t catch a pass until the fourth quarter.

So, here comes Brown to the mix, just when the two Pro Bowl wideouts are getting healthy, just when Rob Gronkowski (two touchdowns in two weeks) is finally appearing fluid, just when Brady is reaching a comfort-zone rhythm that people in Foxborough, Massachusetts, are intimately familiar with.

It looked like same ole TB12 just before the half, when Brady ran the two-minute drill with none of the hiccups seen in the loss at Chicago in Week 5, the unit covering 88 yards in culminating the drive with the Miller TD. After the Raiders cut the lead to four early in the fourth quarter, Brady smoothly ignited an 11-play TD drive. Then it was turnover-touchdown-rout.

Interesting, too, that Brady has hit this stride of impressive back-to-back showings — a week earlier, the Bucs knocked the Packers from the ranks of the undefeated — while his former team has regressed to the point that successor Cam Newton was benched during the worst home loss of the Bill Belichick era.

In any event, as hot as Brady is at the moment — after throwing three picks in the first two games, he has a 15-1 TD-to-INT ratio over the past five contests — some may wonder whether the Bucs are playing with fire in more ways than one by adding Brown.

“We’re going to see how it all fits together,” Brady said. “There’s a lot of hard work ahead. None of it just magically happens. I think we just realized that early in the season. We put a lot of new people together; we’ve got to figure a lot of things out in a short period of time.”

Arians disputed reports that Brady influenced the signing of Brown. The coach insisted that he and general manager Jason Licht (whose path intersected with Brady with the Patriots) have discussed pursuing Brown for a couple of weeks. Maybe so, but it’s hard to believe that Brown would be a Buc without Brady’s endorsement.

During their brief stint as teammates in New England last year, Brady and Brown quickly formed a bond, with the quarterback eager to help the new wideout learn the playbook.

Despite that, Arians – whose paths crossed with Brown in Pittsburgh — said earlier this year that he wasn’t interested in signing Brown. As Arians put it back then, “Not a good fit.”

What changed? Maybe it’s the heat of competition, with the Bucs aiming for the franchise’s first playoff berth in 13 years. Maybe it was indeed a push from Brady, who had something to do with Gronkowski coming out of retirement.

Brown’s off-the-field issues, including allegations of sexual assault and misconduct with two women – one case leading to an NFL suspension, the other headed to civil court – on top of a falling out with the Raiders last year that led to his release, fuel the obvious questions about whether he will mesh or detract from the chemistry of a team that is going places.

Arians is one of the NFL’s most progressive coaches, particularly when it comes to speaking out about thorny issues, such as opportunities for minorities and women. He backs up his words; all three of his coordinators are African-American, and his staff includes two women in a full-time coaching role.

He has not been shy about supporting causes to combat domestic violence. Yet pressed about the allegations associated with Brown, Arians draws a line.

“Just let the court system do their job,” he said. “Allegations are just that. &mldr; If it’s found out to be true, he won’t be with us.”

History shows that talent will get you another shot in the NFL – unless you’ve been one of the ringleaders in protesting during the national anthem, which is shameful on another level for the NFL when considering the doors that were closed on Colin Kaepernick.

Brown has his next chance again. The Bucs will be his third team in 14 months since leaving the Steelers.

Time will tell whether the third time is the charm.