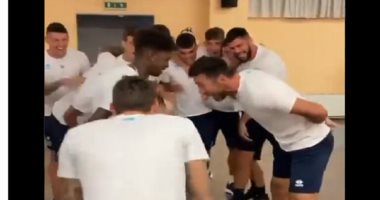 The legendary goalkeeper of the Italian national team, Galuigi Buffon, published, through his official account on Instagram, a new video clip of his colleagues in the Italian club Parma, as he defeats them one by one in one of the games he played in childhood, which some describe as a “paper and scissors” game.

And soon the post, published by the legendary Italian goalkeeper, received a lot of interaction from his friends and followers, and French star Kilian Mbappe was keen to comment below the video by adding a sarcastic emoji, and the great star Patrick Evera was keen to share the video with his friends in the comments.

Last July, after 7,339 days of absence, veteran goalkeeper Gianluigi Buffon returned to guard Parma’s goal after a busy career with football over 20 years, in the friendly loss of his team against German Bochum with a free goal, as part of the two teams’ preparations for the new season..

Buffon, 43, had preferred to return to his club Parma, having joined Juventus in 2001 for a record amount of 53 million euros at the time..

Parma signed his former goalkeeper on a free deal, after the expiration of Buffon’s contract with Juventus.

The Bochum match was Buffon’s first appearance with Parma, after an absence of 20 years, as he celebrated this matter on his personal account on the social networking site “Twitter” by writing “Back after 7339 days”, and Bochum scored the winning goal in the second half, after Buffon left Substituted at the end of the first half.

The new season will be Buffon’s second in Serie B after a season he spent at Italian club Juventus when the team was relegated in 2006/2007..

The 43-year-old goalkeeper started his football career with Parma 26 years ago, and moved to Juventus in 2001, to write a history with the old lady full of titles until 2018, then to Paris Saint-Germain in the 2018/2019 season before returning again to the Bianconeri..

Parma was relegated to the Italian second division last season after occupying the 20th and last place with 20 points from 38 rounds..

3 cups of coffee a day keeps your heart and reduces the chances of disease.. a study that shows