Incredible footage has captured the moment an angry butcher dragged a vegan activist holding a pig’s head away from her store in a busy shopping centre.

Notorious animal rights protester Tash Peterson uploaded footage of her encounter with a butcher in a Perth shopping centre on Thursday to her Facebook page.

The video shows the 26-year-old dressed in blood stained white clothing holding a pig’s head and reciting a speech about the way pigs are killed in abattoirs.

Her spiel draws the attention of other shoppers before igniting fury from the butcher, who jumps over her display fridge to confront Ms Peterson. 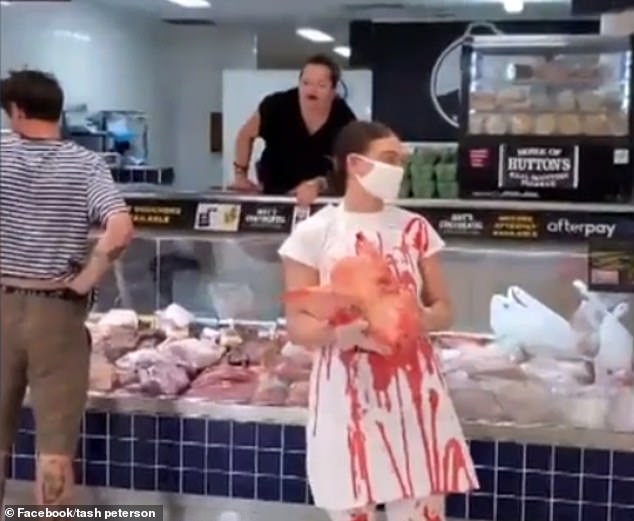 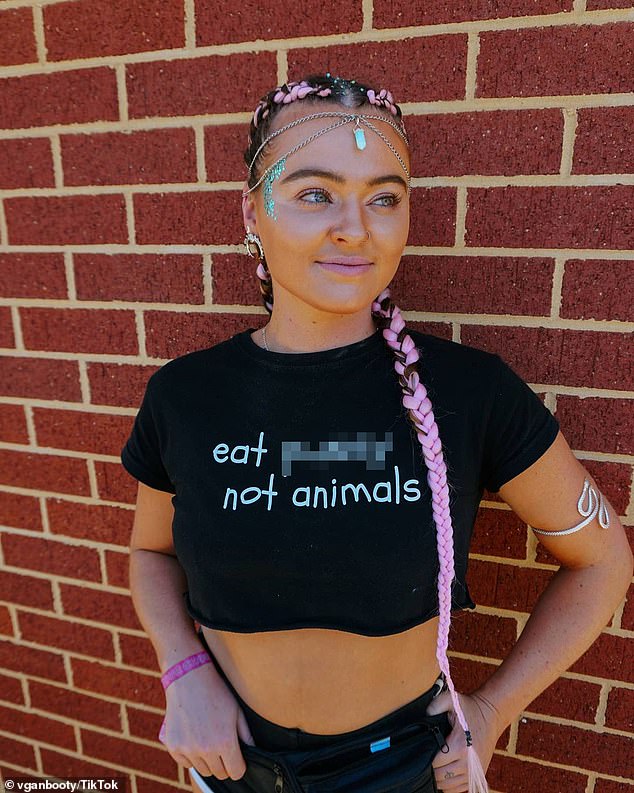 ‘Get out now!’ the butcher screams as Ms Peterson continues her rant.

The heated exchange caught the attention of several Christmas shoppers, including some who stopped to film the intense stand off on their mobile phones.

Ms Peterson doubles down on her beliefs in the footage, asking the fuming butcher ‘are you proud to be an animal abuser?’

She then turns to passing shoppers and says ‘if you use animal products, you are an animal abuser’.

The seething butcher then grabs the pig’s head and begins dragging Ms Peterson out of the shopping centre by the snout. 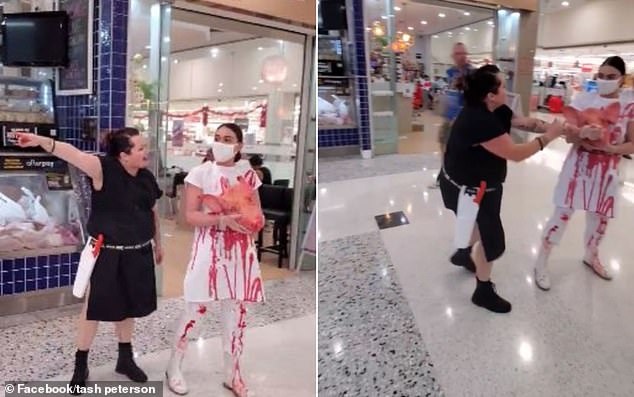 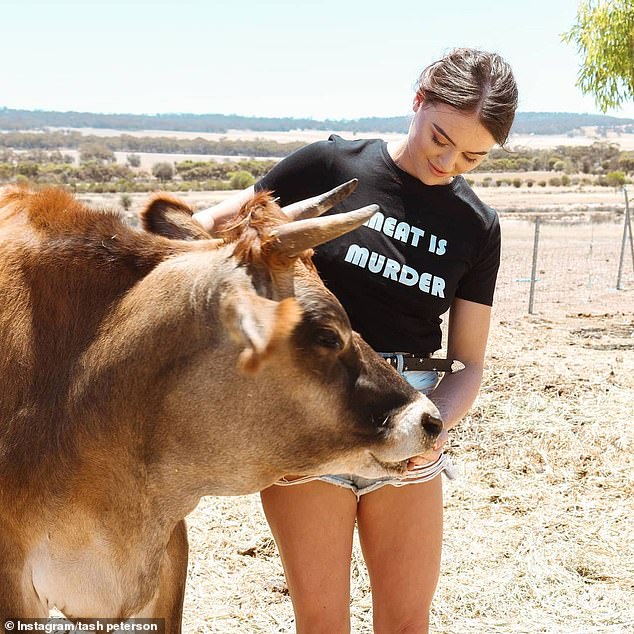 During her rant, the 26-year-old turned to passing shoppers and said ‘if you use animal products, you are an animal abuser’

‘Don’t you have a life?’ the butcher says to the activist. ‘Can I come to your work and do this to you? Get the f**k out!’

After getting dragged outside, a security guard enters the fray and stops Ms Peterson from continuing her rant in the complex.

‘Why is she so triggered when I speak the truth about what happens in the very industry that she profits from?’ Ms Peterson captioned the video.

Comments on the post were split with supporters of Ms Peterson and those who disagreed with her public display.

‘You are a very brave woman,’ one comment reads. ‘Thank you for doing this. We all need to do this. People don’t like to hear the truth.’

‘Thank you on behalf of the animals,’ a supportive post reads. ‘It’s called freedom of speech. This butcher is disgusting for abusing and assaulting you.’

Other commentators backed the butcher and believed her outburst was valid. 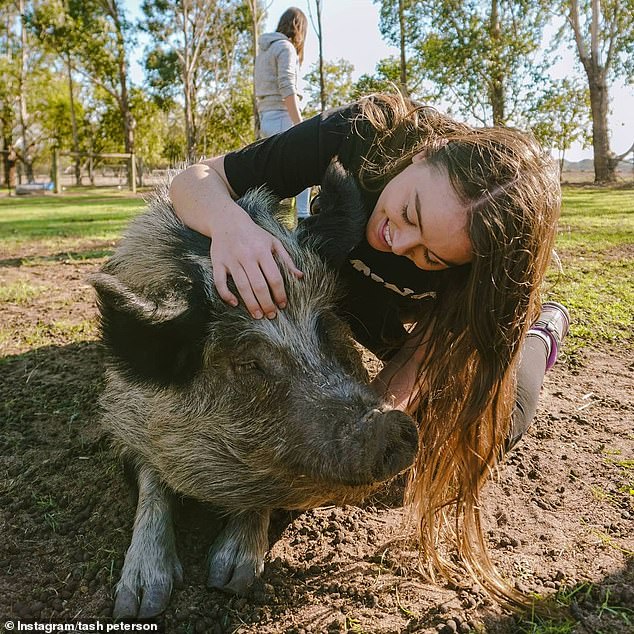 ‘That woman was completely and utterly in the right,’ one comment reads. ‘She might have gone berserk and gone berserk but I can see why she did it.’

‘It’s aggravating when someone disturbs you when you’re trying to work and make a living.’

‘Tash I like you but you asked for it this time,’ another wrote. ‘People like you are the reason why being vegan has a bad rep.’

Ms Peterson’s rant outside the butcher is the latest stunt she has made over the course of her activism.

Earlier this month Ms Peterson went topless wearing body paint and a cow onesie up to her waist to protest outside an Italian restaurant in Fremantle.

Ms Peterson has previously dressed in bloodied aprons and stormed into McDonald’s and Coles, at times carrying a fake slaughtered pig head.

The protest left Ms Peterson with an $1800 fine for trespassing.

After appearing in court for her charges, Ms Peterson emerged with the sounds of animal slaughter in the background and her mouth taped shut. 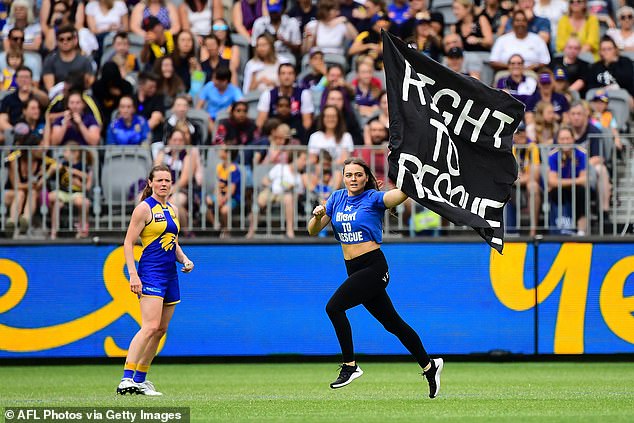 She was arrested for storming Perth’s Optus Stadium during the first-ever AFL Women’s Western Derby, holding a black flag reading ‘right to rescue’ 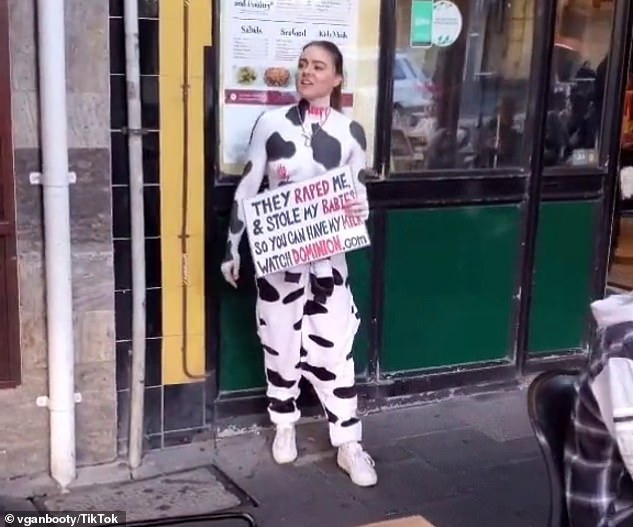 Trump and Iran .. what next after the threat?

The Netherlands records 13,032 cases of corona, a new record increase