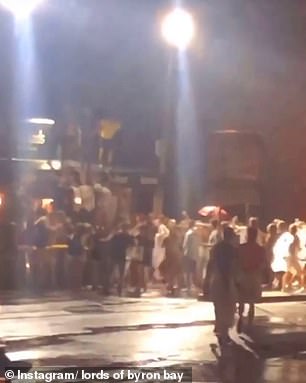 Hundreds of people have been filmed dancing on a main street in Byron Bay despite Covid-19 restrictions limiting outdoor gatherings to 100 – and social distancing still being in full force.

Shocking footage shows people dancing on the roof of the Fishheads restaurant while others crowded Johnson Street next to the Byron Bay beach car park on Wednesday night.

They partied next a ‘no alcohol’ sign before police arrived to break up the gathering in a video that was posted to the Lords of Byron Bay Instagram page.

‘Cluster at The Wreck for Necrorules’ new music video filmed in Byron Bay,’ the post was captioned.

‘The aftermath of smashed glass up there this morning was horrific,’ one local woman commented.

‘Dear Covid. Welcome to the Bay. Enjoy your stay,’ one man said.

‘Imagine being an ER nurse in Byron right now and having to treat drug and alcohol. You’d be nervous and furious,’ another man wrote.

Fishheads owner Ralph Mamone said the gathering was ‘unfortunate’ but he suspected it was ‘just a one-off incident’.

‘It’s just one of those incidents, young people are young people and sometimes there’s few silly ones amongst them. It was just lucky no one was hurt,’ he told Daily Mail Australia.

‘These incidents used to happen all the time 15 years ago but this year’s different, we’ve had a lot of people in town since no one can travel overseas.

‘To expect that we have all these people around town and no incidents is unrealistic.’

Mr Mamone said all of the rubbish has been cleaned up by the council and no damage was done to his restaurant.

Wednesday’s beachside gathering comes after more than 300 backpackers had a party at the nearby Belongil Beach on Saturday night.

Angry locals woke up to find rubbish strewn across the Byron Bay beach on Sunday morning.

No more than 100 people are allowed to gather outdoors in New South Wales, though locals claim there were upwards of 300 people gathered on the sand on Saturday.

Photos have been uploaded to social media showing mounds of rubbish piled across the beach.

Plastic and glass bottles were found heaped together with empty cardboard boxes and discarded plastic bags.

More than 300 backpackers have staged a beach party and left behind a trail of destruction in complete disregard of Covid-19 restrictions (pictured, rubbish found on the beach on Sunday)

‘There were smouldering logs from the fire & broken glass throughout the sand,’ one angry local wrote.

‘The sand had so much buried trash that I was stepping on buried bottles, cans & trash of every description. This is bl***y disgusting.’

Other locals claimed the flames from the bonfire were so big they could be seen from all over the bay.

‘The beach needs patrolling to stop this c***, maybe locals that live nearby can report to the police,’ one local said.

Local police have been breaking up large public gatherings in the area since last Thursday (December 24).

They have already doled out 73 parking infringements and are considering handing out more to organisers and attendees.

‘It’s not fair for council workers and locals to have to clean the significant mess that is being left after each of these gatherings.

‘I urge those who are intent on meeting in parks and beaches to not only do so safely but be respectful to the environment and those around you by cleaning up after yourself.’

Superintendent Roptell warned public celebrations would be closely monitored over the coming days.

Collect Every Star With Our Super Mario Galaxy Walkthrough

Collect Every Star With Our Super Mario Galaxy Walkthrough