California doctors say they have successfully separated nine-month-old twin girls born conjoined at the head after a marathon 24-hour procedure.

After more than 10 months of preparation, Abigail and Micaela Bachinskiy are recovering from their operation at UC Davis Children’s Hospital in the Pediatric Intensive Care Unit (PICU).

Conjoined twins occur in approximately one in 200,000 births, but twins joined at the head – called craniopagus – are extremely rare.

The operation was a success and, should no complications emerge, Abigail and Micaela will be back home in just a few months. 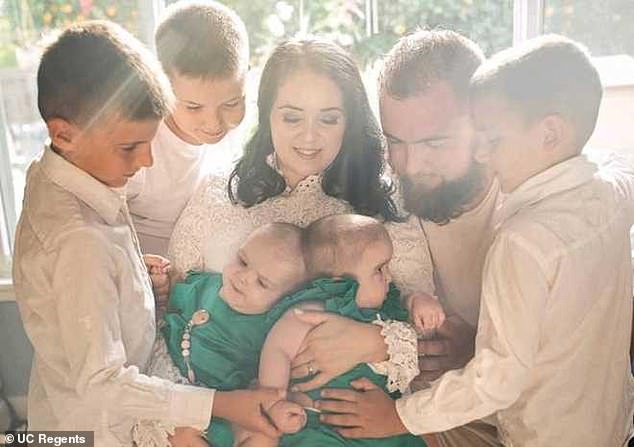 Abigail and Micaela Bachinskiy, nine months, of Sacramento, California, were born in December 2019 as craniopagus twins, conjoined at the head. Pictured: The girls with their parents and three brothers before the surgery 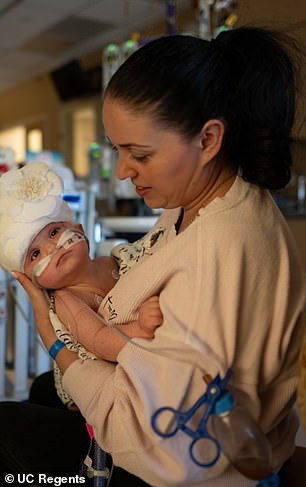 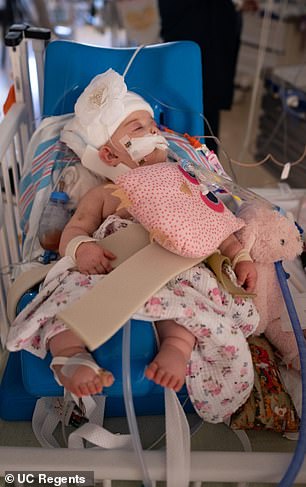 Micaela (left) and Abigail’s (right) attachment is extremely rare, occurring in just 2% to 6% of all twins. The babies are recovering well in the PICU, doctors say 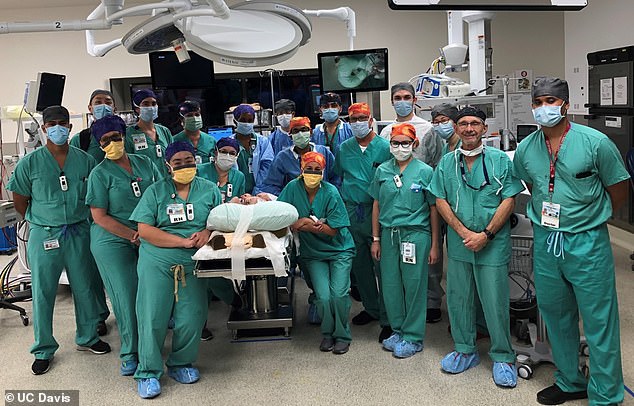 The twins’ parents, Liliya Mirochnik and Anatoliy Bachinskiy, who live in Sacramento, discovered they were conjoined when Mirochnik.

The pair, who recently celebrated their 10th wedding anniversary and have three sons, were shocked and devastated.

Craniopagus twins occur in 10 to 20 in every million births in the US.

Approximately 40 percent are stillborn and about 33 percent die after birth, normally due to organ failure or abnormalities.

But 25 percent have been known to survive and even have the option to be separated depending on where they are attached at the skull.

‘Conjoined twins in and of themselves are rare and to have them joined at the head is even more rare, and to even have the favorable anatomy to be divided because sometimes shared too many structures is even rarer,’ he said.

Many conjoined twins never even make it to delivery, let alone an operation, Wong added.

WHAT ARE CRANIOPAGUS TWINS?

Craniopagus conjoined twins are babies who are connected at the top of the cranium.

This condition occurs in about ten to 20 babies in every one million births in the US.

An estimated 2% to 6% of conjoined twins are attached at the top of the head, making it the rarest form.

Overall, conjoined twins are more likely to be female.

With craniopagus twins, they are always genetically identical and share the same sex.

Few craniopagus twins survive the birth because of how they are attached.

About 40% are stillborn and an additional 33% die after birth, normally due to organ failure or abnormalities.

But 25% have been known to survive and even have the option to be separated depending on where they are attached at the skull.

Advances in brain imaging and neurosurgical techniques have made these separation surgeries more possible.

Mirochnik’s physician referred her to UC Davis Fetal Care and Treatment Center to get the considerable prenatal care she would need.

Doctors used a fetal MRI to learned about the twins’ anatomic structures and then built conjoined manikin dolls to help plan for their delivery.

Abigail and Micaela were born at UC Davis Children’s Hospital on December 30, 2019 and spent seven weeks in the Neonatal Intensive Care Unit (NICU) before going home.

‘We have felt so much support from staff,’ Mirochnik said.

‘We have received so much help, so much advice. It has made us feel at home here.’

For 10 months, doctors practiced simulations on 3D models to prepare for numerous scenarios that could occur including compromised airways or collapsed lungs.

They also used augmented reality to study the blood vessels that would need to be detangled and separated – and practiced doing so.

In June, a plastic surgery team placed custom-designed tissue expanders underneath the scalp and stretches the skin so each girl’s head has enough skin to cover their skulls after the operation.

‘There was planning for every step of the way that we could think of,’ UC Davis pediatric neurosurgeon Dr Michael Edwards told DailyMail.com.

‘Everything’s gotta happen on time, the right way, everybody ready and no question about what we’re asking them to do.’

When the girls turned nine months old, doctors said they could not wait any longer to separate them.

‘There have only been mid-20s in terms of conjoined separations in world history. They haven’t been done younger than six months of age,’ Wong said.

‘Doing it too much later, there are certain developmental milestones you want them to have and the biggest one is mobility, and eventually crawling, standing and walking and obviously, if they’re conjoined, they’ll be delayed.

‘We want them old enough to handle such an operation but young enough not to miss developmental milestones.’

The day of the surgery, which started on October 23 and went into the morning hours of October 24, involved more than 30 people, including neurosurgeons, nurses, anesthesiologists, pediatric surgeons, and plastic surgeons.

‘One team manages one baby and one team manages the other and there’s no crossover for assistance,’ Dr Rajvinder Dhamrait, director of pediatric anesthesiology at UC Davis Children’s told DailyMail.com

‘So if one baby deteriorates, the other team does not help. Then there’s a coordinator, or an overseer, who manages both. That was me; I did both. 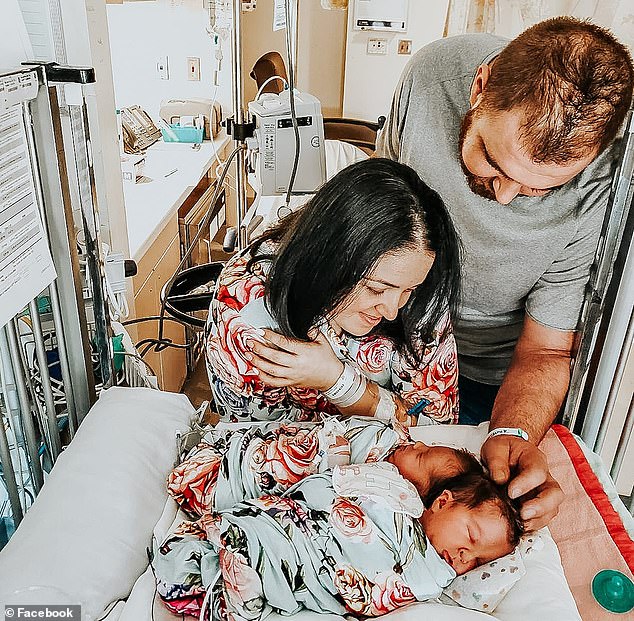 To prepare at UC Davis Children’s Hospital built 3D models of the girls’ head and practiced how the separation surgery. Pictured: Liliya Mirochnik and Anatoliy Bachinskiy with the girls shortly after their birth 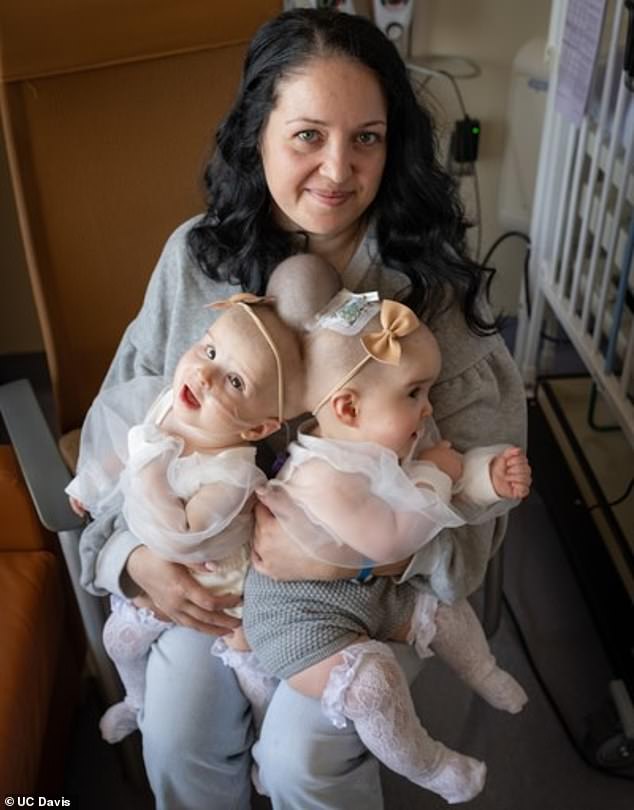 The team also used augmented reality to study the blood vessels that would need to be detangled and separated – and practiced doing so. Pictured: Mom Liliya with Micaela and Abigail, two days before the separation surgery

The plastic surgeon made the initial incisions and removed the tissue expander removed and scalp flaps.

This was then followed by dividing large veins and brain matter so each girl could have her own circulatory system.

Next, surgeons performed a fistula ligation, a process that involved clipping and separating shared veins.

Doctors then opened the dura, a thick membrane that surrounds the brain and spinal cord, to separate the brain matter.

After the separation, the plastic surgery team reconstructed the skull and scalp.

Throughout all this anesthesiologists administered anesthesia and medication to maintain the twins’ blood pressure, and blood transfusions were administered.

‘The operation has to be done as accurately and expediently as possible because the longer it is, the greater the risk of blood loss, of exposure to anesthetics,’ said Wong.

At 3.28am on October 24,  Edwards announced, ‘Cranial separation!’ when the babies were officially separated to the cheers of the team.

Abigail and Micaela are now recovering in their own separate beds in the PICU. 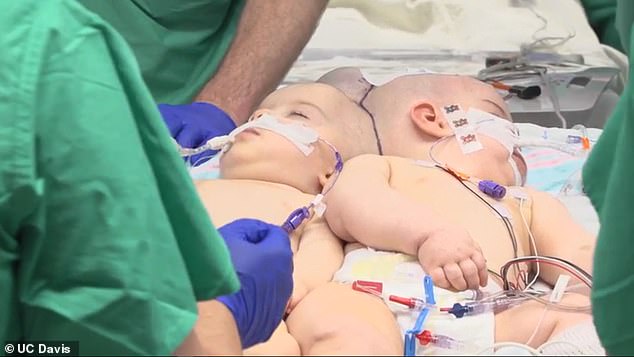 The girls, who will be 10 months old on Friday, will be monitored over the next few months as they heal from the surgery. Pictured: Micaela and Abigail during surgery 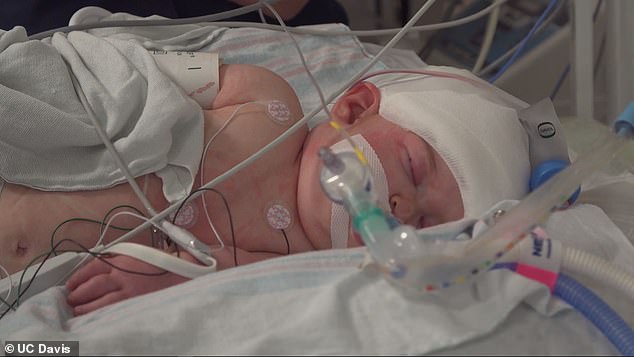 Should no complications arise, the girls will be sent home. Pictured: Baby Abigail during the surgery

‘Everything went well. It felt almost impossible to separate them, but God and the doctors and nurses at UC Davis made it possible. We are so thankful,’ Mirochnik said.

The girls, who will be 10 months old on Friday will be monitored over the next few months as they heal from the surgery.

Micaela has since been extubated and Abigal will be extubated on Thursday.

‘I never thought we would do it and when you get to do it, you pick the rare most complicated spectrum of disease condition…I can’t stop smiling; it’s just amazing.’ Dhamrait, the anesthesiologist, said.

Edwards, the neurosurgeon, says he cannot wait to see the girls interact when they see each other for the first time.

‘I like to go up there every morning because the world around us is full of bad things and terror, and you go up there and see these two little girls, and it’s a good start to the day,’ he said.