At least two earthquakes shook up the Los Angeles within half hour of each other Monday before dawn.

The U.S. Geological Survey said a 4.0 tremor was reported at 4:44 a.m. near Lennox, California.

The epicenter was just east of the Los Angeles International Airport, along Century Boulevard on the south side of Hollywood Park.

It also was relatively deep, at 12 miles. 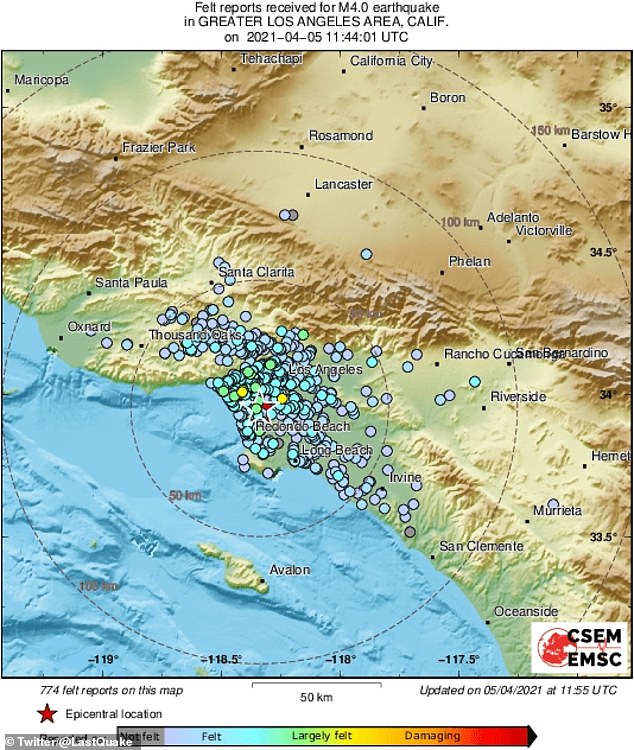 A series of tremors, the strongest a magnitude 4.0, struck the Los Angeles area before dawn Monday, the U.S. Geological Survey said. No injuries or damages have been reported

The USGS said light shaking was reported across the greater metropolitan area and no significant damage was expected.

The larger tremor preceded a 3.3 quake that was felt across the Southern California area, the U.S. Geological Survey.

A series of tiny aftershocks followed.

According to the USGC, no reports of damage were documented to authorities.

At least three earthquakes of magnitude 3.0 or greater have been measured in the area in the last 10 days, the Los Angeles Times reported. 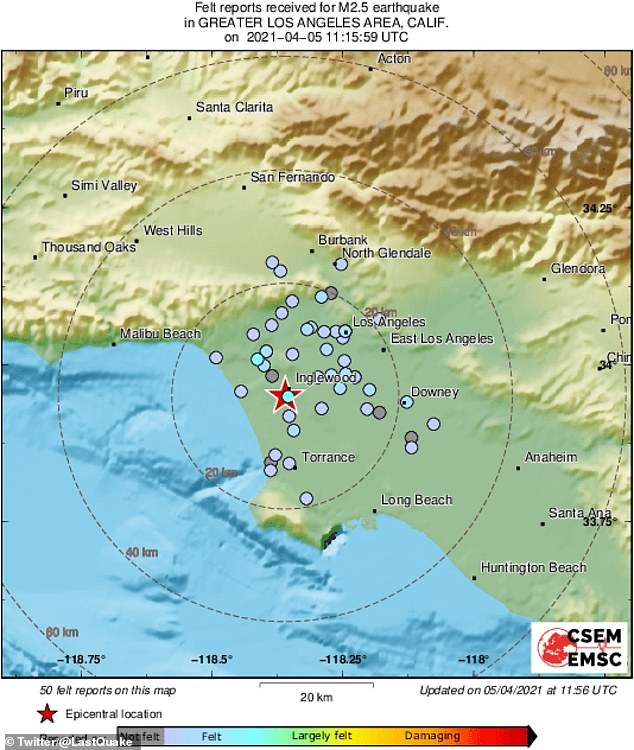 The Los Angeles areas was hit by a series of tremors Monday, including a magnitude 4.0 reported near Inglewood

Los Angeles area residents awaken by the earthquake attempted to make light of the situation, specifically one user on Twitter who wondered why the area tends to be rattled in the middle of the night.

‘Also why do earthquakes insist on popping of at such ghoulish hours every time,’ @caitedelaney wrote on Twitter. ‘Where’s a sensible 2pm quake.’

@Aliyah111_ wrote: ‘I know angel numbers are important and all but mother nature didn’t need to have an earthquake at 4:44 am waking me up and everything.’

‘The Big One’ is a hypothetical earthquake of magnitude 8 or greater that is expected to happen along the San Andreas fault.

Such a quake is expected to produce devastation to human civilization within about 50-100 miles of the quake zone, especially in urban areas like Palm Springs, Los Angeles and San Francisco.

Contingency plans warn upward of 14,000 people could die in worst-case scenarios, with 30,000 injured, thousands left homeless and the region’s economy setback for years, if not decades.

Unlike native Californians, NBA writer Chris Palmer has yet to have grown accustomed to the small tremors are often played down by locals.

‘That was my 27th earthquake in 10 years of living in LA. They always come at night,’ he tweeted. ‘Never feel smaller. Never get used to it.’

Palmer later wrote: ‘The Big One will happen in my lifetime. They predict next 50-70 years. I say 10 years. I went to Sequoia National Park. There was a 200-foot tree that was leaning. They said it would fall in 30 years. It fell 12 days later. #Earthquake”

The strongest earthquake to ever hit California was a magnitude 7.9 on January 9, 1857 in Fort Tejon. Two people were killed.

New science research shows that a lesser-known section of the San Andreas fault in Southern California may hold the key to sparing Los Angeles from the next ‘Big One’ earthquake.

A study last June found that the risk of a Big One earthquake along the San Andreas fault in the next 12 months was 2.3%, three times higher than previously thought.

The Big One is a hypothetical earthquake of magnitude 8 or greater.

Such a tremor could produce devastation to human civilization within about 50-100 miles of the quake zone, especially in urban areas like Palm Springs, Los Angeles and San Francisco. 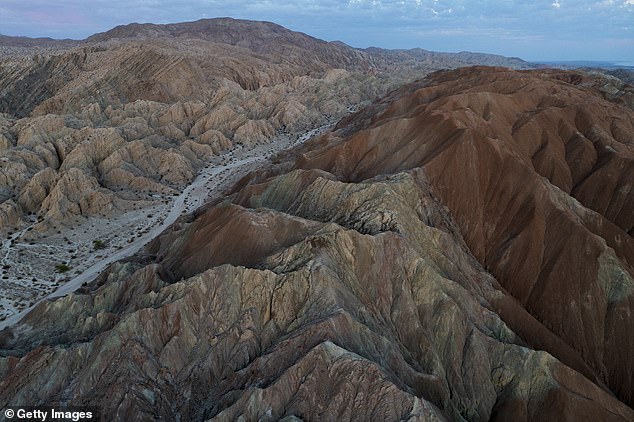 The San Andreas fault runs much of the length of California and marks the boundary between the Pacific and North American continental plates. Where the plates collide mountains form as the land crumples like a sheet of paper (pictured is a section near Mecca in southern California)

The 800-mile system of fractures running much of the length of California marks the boundary between the Pacific and North American continental plates, which produce earthquakes when they rub up against each other.

Scientists call the main areas of tension ‘strands’, where collisions between the two plates produce dramatic ridges and valleys as the land is crumpled like a sheet of paper – as seen below in newly-released images.

Experts previously thought that most of the San Andreas Fault’s movement occurred along the Banning and Garnet Hill strands some 100 miles east of LA.

But they have now discovered that another section, called the Mission Creek strand, sees even greater movement, and is thus at a higher risk of witnessing a quake. 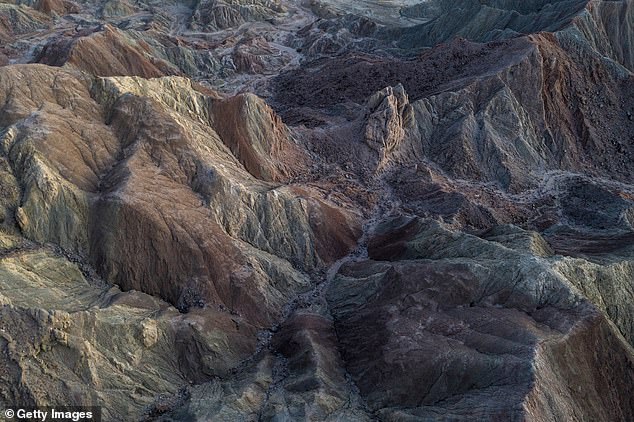 Scientists call the main areas of tension ‘strands’, where collisions between the two plates produce dramatic ridges and valleys like these ones seen in the hills near Mecca

Copper Price Remains Range-Bound Despite the US Infrastructure Plan

The Kremlin accuses 'Ukrainian beasts' of executing a boy, 5, with a drone