By Dan Sales and Kathryn Batte For Mailonline

A fan who shone a laser pen in Kasper Schmeichel‘s face before Harry Kane‘s penalty should be investigated by police, supporters urged today.

The unmistakable green beam flickered across the Denmark keeper’s head as the England captain was lining up to take his shot.

While at no point did it appear to go in the eyes of Schmeichel, 34, the coloured light danced over his cheek and forehead.

The torch-style gadgets have been a problem at sporting events for some time, but in recent years have been rarely seen at football matches.

There is a law relating to them being used to endanger vehicles but would not cover individuals. It may be the offence would fall under an assault category.

In 2010 in America a man was jailed for three years for dazzling a sheriff and being charged with second-degree assault.

The Football Association has previously launched an investigation into fans using the pointers, with one probe launching when Wayne Rooney was targeted in 2015.

Today supporters urged the police to get involved and investigate online. 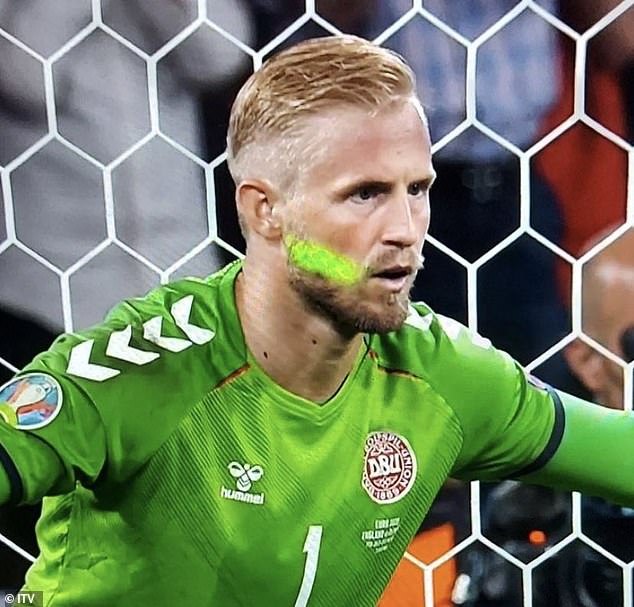 Twitter user Tim said: ‘Whoever used the laser pointer does deserve a lifetime ban and a police caution.

‘As he saved the penalty he was thankfully unaware and unharmed.’

Tom added: ‘Those behind the lasers need to be indentified and charged by the police.’

A spokesperson for the Met Police said they were looking at whether it was something they would investigate.

Jimmy added: ‘Whoever shone that laser pen at Schmeichel ….should be done by the police…a green laser pen was shone on his face during the penalty.’

The Three Lions had been awarded a spot-kick in extra-time when Raheem Sterling was brought down by Joakim Maehle. 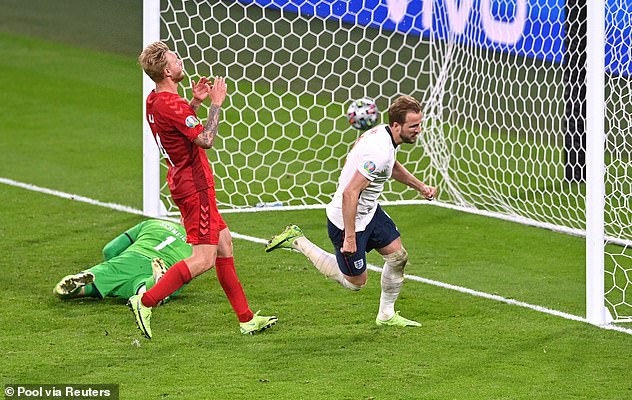 Owning a laser pen is not illegal but a person caught using it to dazzle others in the eyes is committing an offence.

In 2017, the Government toughened penalties on those caught targetting transport operators or drivers with a laser device.

The Laser Misuse (Vehicles) Bill expanded the list of vehicles beyond just planes and meant those caught shining a laser at a transport operator could face up to five years in jail.

Drivers of trains and buses, captains of boats and even pilots of hovercrafts are among those protected by the law.

Offenders may also be liable to a Community Protection Notice for anti social behaviour.

The Health Protection Agency suggests that laser pens that are more powerful than Class 2 should not be sold to the public.

In 2017, the Government called for evidence into the regulation of laser pointers after a survey of UK ophthalmologists reported more than 150 incidents of eye injuries involving laser pointers since 2013.

The Civil Aviation Authority has also reported a rise in lasers being pointed at helicopters and planes on take-off and landing.

Just before Kane stepped up to take the penalty, a laser was shone on Schmeichel from somewhere in the crowd.

Despite the interference, the Denmark goalkeeper saved Kane’s penalty – but he was only able to push the ball straight to the feet of the striker, who converted the rebound. Supporters took to Twitter to condemn the person who tried to disrupt the Leicester shot-stopper.

Former Liverpool and England striker Collymore tweeted: ‘If anyone shone a laser pen at Schmeichel, they want banning for life.’

Fans of England and other nations also criticised the supporter in Wembley, with one tweeting: ‘Whoever shone that laser pen in Kasper Schmeichel face wants banning for life.’

Another added: ‘Whoever showed that laser to Schmeichel’s face deserves a permanent ban from Wembley and further England games.’

Others claimed the outcome of the match was unfair, with England going on to see out the game after Kane converted the rebound.

‘A laser in Schmeichel’s eyes during the penalty too now I see. Really difficult to feel that this is a fair result,’ one supporter wrote.

Another fan said that the laser didn’t affect the goalkeeper as he was still able to make the save, but admitted that it there was no excuse for the ‘stupid’ supporter.

They wrote: ‘That laser pen incident was stupid and there is zero exccuse/ justification for it. I’d ban that ‘fan’ for life. That said, it didn’t affect Schmeichel considering he saved the penalty. Still, a very poor incident.’

Others commented on how bad of a look it was for England fans, with one writing: ‘Unbelievable. Someone in the crowd was pointing a laser into Schmeichel’s eyes as he was trying to save the penalty Sterling dived for.

‘Horrible look for England this. Disgraceful.’