Camavinga: Real Madrid is a young dream and my gateway to the French national team 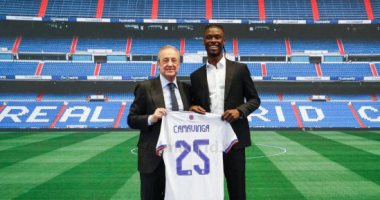 Frenchman Eduardo Camavinga expressed his great happiness at joining Real Madrid, in statements on the sidelines of his presentation to the media this evening, Wednesday.

Camavinga said in a press statement, “I am very happy and proud to be here, I thank the president of the club and my family, because they made it possible for me to be here, as they told me a few years ago, Hala Madrid.“.

And the French star continued: “The moment I learned that I would become a Real Madrid player, I was very happy, I thought about the difficult times I had with my family and I am happy for them.“.

And the new Real Madrid player continued: “I will work hard and give everything I have in training to be ready whenever the coach needs me, and my move to Real Madrid was not because of money, but to achieve my dream that I have always dreamed of since I was young, and I did not hesitate for a second to accept the offer and I knew how far Royal interest in contracting with me two years ago“.

He added about his preferred position, saying: “I like to play in front of the defensive midfield, but I can also advance and participate in the offensive aspects and I have the ability to adapt to any position and certainly I need some time, but I feel ready for Sunday’s match against Celtva Vigo, but the coach’s final decision.“.

The Frenchman continued: “I have great memories with Real Madrid, especially in the Champions League, in addition to Ronaldo, Zidane and Figo as the best players.“.

He continued: “I want to be in the French national team and that will only come by playing well with Real Madrid“.

He concluded his statements: “I consider Benzema an example for all the French, he treats everyone very well and this is clear with Vinicius, and I want to learn from all the players at Real Madrid.”“.

The president of Real Madrid, a competitor in the Spanish League, welcomed the new deal and the first-team midfielder, Eduardo Camavinga, who moved to the royal from Rennes last summer Mercato..

Camavinga moved to Real Madrid for the next 6 years until June 2027, for a fee of 31 million euros, and the 18-year-old will wear the number 25 shirt..

Perez initially spoke about Camavinga’s joining and said at the press conference, “You will defend a shield that has the highest record in football history and has values ​​that millions of people in the world know themselves.”“.

For women.. Eat this fruit daily to get rid of belly fat