Experts at Cambridge University say the number of people catching coronavirus each day has fallen by 17 per cent since the start of lockdown.

The ‘Nowcast’ team, which works with Public Health England, estimates that there are now around 64,000 new coronavirus infections each day, down from 77,600 on November 3.

They calculated that the R rate is still above one in every part of the country, with ‘almost 100 per cent probability’ but is plateauing in most places and falling in some.

The estimate is now the highest of the high-profile statistics that are published each week, with the Office for National Statistics last Friday projecting 45,700 infections per day, and the Covid Symptom Study estimating 36,000 for the whole UK.

Cambridge’s team has also brought down their estimate of how many people might die after catching coronavirus, now projecting that between 380 and 610 people will succumb to it on November 14, down from a maximum 710 in the previous report.

The figure is a far cry from the 4,000 deaths per day estimate that the same team had given to SAGE on October 9, which spooked ministers into calling England’s second national lockdown.

In a paper presented to the SAGE sub-group SPI-M, the team had warned that daily deaths could hit 4,010 by December 1. Sir Patrick Vallance came under intense scrutiny for ‘frightening’ the public and MPs with the projection, which it later emerged had been updated and toned down before the press conference.

Recent data has stacked up against the case for England’s second lockdown, showing that positive tests had started to level off before the shutdown was announced and that many areas were already seeing declines in infection.

Cambridge’s model estimates that there are now 64,200 people catching coronavirus each day in England. Before lockdown it put the figure at 77,600. The graph appears to still be rising because the earlier estimate has been adjusted down with more up-to-date data

The team said that, although their estimate of new daily cases has dropped since last time, the outbreak still appears to be growing.

They said it was too soon for the effects of England’s national lockdown to show through in data.

Writing about the reproductive rate of the virus, which they refer to as Rt and which must come below one for the outbreak to stop getting bigger, they said: ‘The Rt values are above 1 in all regions.

‘The plots of the Rt over time show a plateauing in most regions in the most recent weeks, with downward trends in the North East and Yorkshire and the North West.

WHERE ARE THE MOST PEOPLE CATCHING CORONAVIRUS?

According to Cambridge’s MRC Biostatistics Unit’s report, published today, this is how daily coronavirus infection rates look across England:

‘These lower values of Rt might be the result of various social distancing interventions, but the impact is not strong enough to reduce the Rt values below 1.

‘These trends in the values for Rt and the number of new infections over time have recently been interrupted by the school half-term period, the impact of which is reflected in our model through inclusion of Department for Education attendance and Google mobility data.

‘After this period, the values of Rt revert to their pre-half-term levels. As Rt remains above 1, the number of new infections occurring each day will continue to rise.

‘The lock-down introduced on the 5th of November will have induced changes in contact patterns that are not yet possible to quantify.

‘These may influence the estimation of Rt in the near future, which will be reflected in the weekly iterations of our model.’

Coronavirus is spreading fastest in the Midlands, the report claims, with almost a third of the country’s daily infections taking place there – some 20,100.

A raft of statistics last week suggested that lockdown may have been a rash move and that the country’s outbreak appeared to be slowing thanks to the three-tier local lockdown system.

Promising figures published on Friday by the ONS – which runs a massive surveillance scheme that randomly swabs tens of thousands of people to track the size of the outbreak – suggest that the country’s coronavirus outbreak has shrunk.

It estimated the number of people getting infected each day dropped 12 per cent in a week from 51,900 to 45,700 in the seven-day spell ending on October 31. 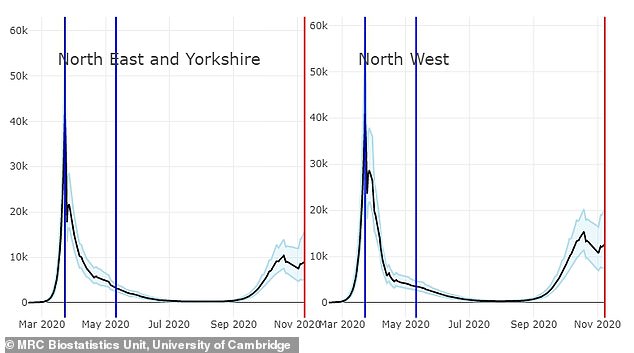 In the North West there are an estimated 12,600 new infections per day, along with 9,060 the North East and Yorkshire – although these areas account for two of the three areas with highest transmission, they also have the lowest R rates, suggesting outbreak growth is beginning to slow 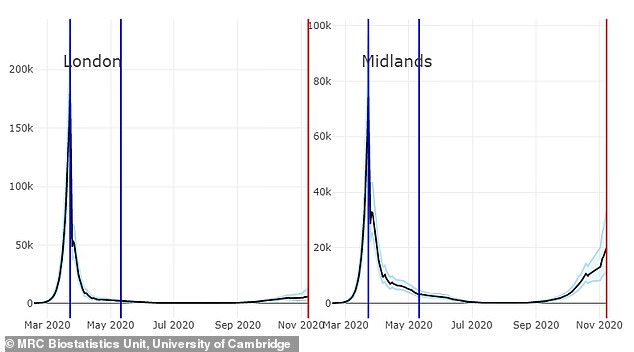 The Midlands (right) accounts for almost a third of all new daily infections at 20,000, the researchers estimate, while London is only seeing around 6,000 per day 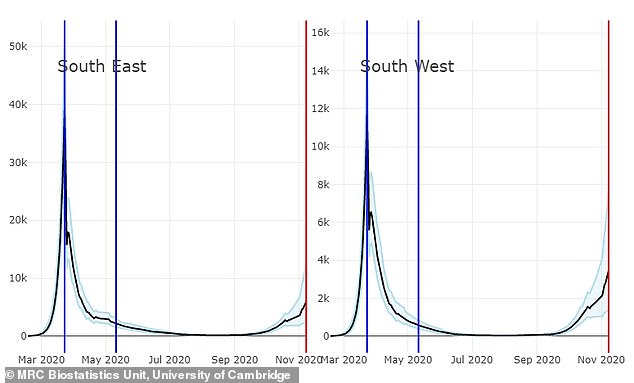 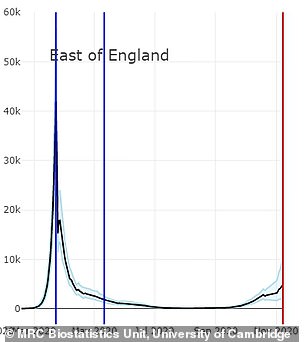 The report estimates there are 4,830 new infections every day in the East of England

And Public Health England (PHE) statistics showed more than half of local authorities across England saw their infection rates fall at the end of October.

Rates even fell in areas that weren’t in Tier Two or Three lockdowns, suggesting national rules such as the 10pm curfew and rule of six were helping.

Other academics behind a symptom-tracking app are adamant the country’s second wave has already peaked and is over. Even SAGE admitted there is evidence outbreaks are slowing in ‘some parts’ of England.

But amid growing calls on Number 10 to re-evaluate whether there is truly any need for the entire nation to be hit by the toughest rules since the spring, the Prime Minister’s spokesman said: ‘The lockdown is for four weeks to the 2nd December. As we have said the trend of hospital admissions are going up.’

It can take coronavirus patients several weeks to fall severely ill, meaning admissions and deaths will continue to spike because cases are still high.

But eminent doctors and scientists argue wards are no busier than usual for this time of year and that there is still plenty of space across the nation to treat the infected. 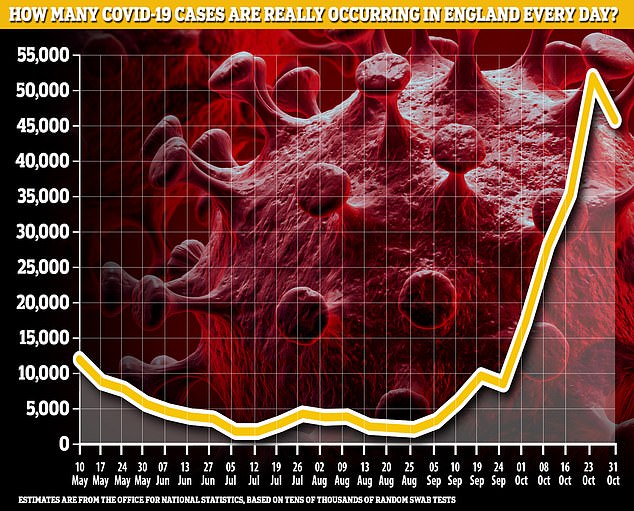 TikTok star Timbo the Redneck, 18, is killed after his truck flips and lands on him throughout donut

TikTok star Timbo the Redneck, 18, of Florida, died Saturday after he flew out of his truck whereas doing...

The primary names have been introduced for Strictly Come Dancing 2021.McFly pop star Tom Fletcher was unveiled as the...