Cancelling vital insurance to save money could prove a tragic false economy, consumers are being warned. Evidence suggests the financial squeeze is prompting families to stop premiums for policies that offer valuable protection against loss of income.

They are being urged against such a move. And other households that have never had this form of protection are being encouraged to consider it, partly because the cost may rise in future.

Alan Lakey, protection specialist at Highclere Financial Services in Hemel Hempstead, Hertfordshire, says people do not want to think of being faced with tragedies such as a partner dying or getting cancer. But failing to plan ahead is dangerous, he warns. 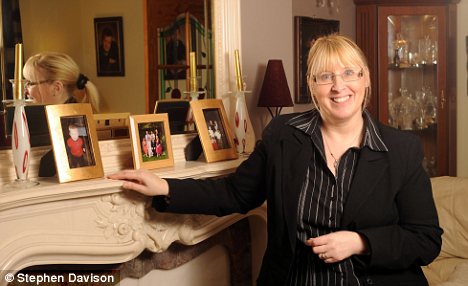 Protected: Insurance has helped Caroline Logue since her husband had to give  up his building business after developing a severe condition affecting his spine

‘I’ve had young couples taking out a large joint mortgage that they would not be able to afford if one of them wasn’t working,’ says Lakey. ‘When I mention protection insurance, they think they don’t need it. It’s worrying. Consumers are also cancelling policies over fears about cost.’

The Association of British Insurers refuses to publish cancellation figures, but bad publicity surrounding the mis-selling of payment protection insurance (PPI) as well as the high cost of cover are believed to have deterred consumers.

‘As we get older, the cost of cover rises or our health might change, impacting on premiums,’ he says. ‘If you want to get cover in the future, the cost will have gone up, or worse – you could be declined.’

Carr and Lakey say the protection ‘gap’ is significant. Just four in ten people have life insurance, according to Scottish Widows. One in three households admit that they could not cope financially if they lost the main income. Almost half of households with children are reliant on two salaries to meet the mortgage and other bills.

A decision in 1999 by Caroline Logue and her husband Brian to insure against loss of income or health has proved one of the best they ever made.

Buying mortgage payment protection insurance (MPPI) and critical illness cover back then has meant they remain today in the home they built together in Claudy, County Londonderry, and the schooling of their son, Niall, 16, has not been  disrupted.

When Brian, 47, developed a severe condition affecting the lower discs in his spine two years ago and had to give up his business as a builder, the family were able to claim on the policy, through Legal & General. Brian’s condition was brought on due to an accident many years previously. The excruciating back pain he now suffers means he has difficulty walking, climbing stairs and driving.

MPPI covers monthly mortgage repayments for a set period, typically 12 months or two years, in the event the policyholder is unable to work due to illness or injury, or is made redundant.

Critical illness insurance pays out a lump sum on the diagnosis of a critical illness. As the Logues had taken out the cover in their 30s – when insurers would have viewed the risk as being relatively low – and their mortgage was relatively small, the total monthly premiums were only £38.

Premiums can be much higher, depending on the sum insured, your age and the state of your health.

The Logues’ policy paid out an  income each month to cover their mortgage for two years. However, as this was coming to an end last June, L&G contacted the couple and said that if medical evidence could prove Brian had a permanent disability, the couple would have a claim on their critical illness policy.

After MRI scans and a four-hour home assessment by an independent doctor, L&G agreed to pay out and the Logues received a tax-free lump sum.

‘You never think you’ll end up in this situation,’ says Caroline, 46, who works in finance for a recycling company. ‘Brian was always fit and strong and took pride in providing for his family. His back condition has been a big shock to us all.

‘It makes Brain depressed and he has good and bad days. But at least, thank God, we took out the protection cover. It is one weight lifted for us.’ 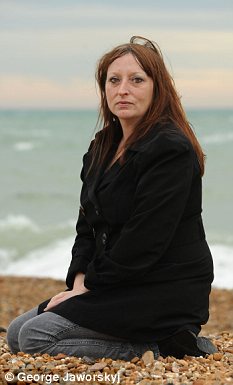 Mortgage nightmare: Sue Mitcheson fears her home will be repossessed

Sue and Ian Mitcheson know to their cost what it means to be uninsured.

Ian was diagnosed with terminal prostate cancer three years ago and had to give up his job in the building trade. Sue has given up work to care for him full time.

Without any payment protection cover or critical illness insurance, Ian and Sue, both 45, had to fall back on savings to pay the mortgage and other bills. When that ran out, they soon fell into arrears.

The couple, from Hawkinge, Kent, live on benefits and face being repossessed, even though Ian is now seriously ill.

‘The mortgage lender had reduced our monthly payments to help, but now it is demanding we start to pay more to clear the arrears,’ says Sue.

‘It’s a nightmare. We can barely make ends meet as it is.’ Sue admits that, like most people, she and Ian were willing to take the risk of illness. ‘We just never thought it would happen to us,’ she says.

‘Protection cover was offered when we increased our mortgage in 2006, but it looked expensive. We believed we could manage on our own.’

Sue hopes to negotiate more time with their lender.

‘It still means I’ll have to sell when Ian dies as I won’t be able to afford the repayments myself.’