Hackers were able to gain access to Capcom’s internal servers via an old VPN device, Capcom revealed in a new update posted to the publisher’s official blog.

The subsequent attack allowed hackers to make off with more than 1TB of sensitive information, including source code, planned release schedules, and other data. The attack also compromised the information of more than 15,000 people, though Capcom says no credit card information was sent.

Capcom provided the helpful diagram below to show how the attack was carried out: 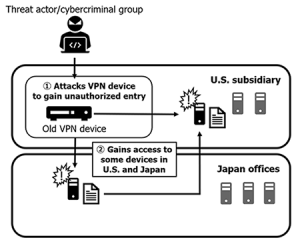 Capcom partly blamed the ongoing COVID-19 pandemic for the conditions leading to the ransomware attack.

The attack first began on November 1, 2020, with Capcom publicly announcing the event just a few days later. Former Capcom employees described being frustrated with the company’s lack of communication, calling the request for info a “one-way street.”

Capcom says it has since taken measures to prevent further attacks, including reverifying the safety of all VPN devices. The publisher has also reached out to those with compromised information to discuss the incident further.

“Capcom would once again like to reiterate its deepest apologies for any complications or concerns caused by the incident,” Capcom wrote. “As a company that handles digital content, it is treating this incident with the utmost seriousness, and will take the appropriate action to address any requests or directions provided by law enforcement and other relevant authorities in each country.”

I finally feel part of the cool club

I finally feel part of the cool club