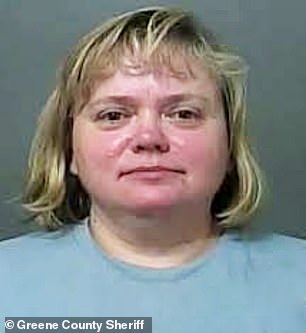 Indiana woman Anna Morgan-Lloyd, 49, who was arrested for her involvement in the Jan. 6 Capitol riot told a federal judge this week that she had watched the Holocaust film Schindler’s List and read books such as Just Mercy to educate herself on the plight of others in an effort to receive a lenient sentencing

A Capitol rioter whose accomplice branded their January 6 antics the ‘best f**king day ever’ on Facebook claimed she’d watched Schindler’s List to reform herself as she admitted her crimes.

Anna Morgan-Lloyd, 49, was arrested in February after she and a friend, Dona Bissey, 52, both of whom are from Bloomfield, Indiana, posted on Facebook about their involvement in the riot, with Lloyd writing in one of the posts that it was the ‘best day ever.’

Bissey uploaded a snap of them together with an almost-identical caption – but added in an f-bomb to emphasize her glee. She also told of her delight at picking broken glass out of her purse afterwards.

Lloyd’s lawyer, Heather Shaner said the rioter had watched and read a list of movies and books at her request, in a bid to better understand ‘government policy’ and persecution of Native Americans, African Americans and European Jews, according to court filings. That list included Steven Spielberg’s 1993 Holocaust masterpiece, as well as Bury My Heart at Wounded Knee and Just Mercy.

‘We have discussed the books and also about the the responsibility of an individual when confronting “wrong,”‘ she said in her Lloyd’s defense.

Lloyd (far right) and her friend Dona Bissey, 52, were arrested after posting photos of themselves in the Capitol building on Facebook

Lloyd (left) and Bissey (right) at a March 1 court hearing after the two were charged in connection to the Jan. 6 Capitol riot

Lloyd admitted parading, demonstration or picketing in a Capitol Building at a court in Washington DC on Friday, with prosecutors agreeing to a proposed sentence of 40 hours community service and a $500 fine.

She is scheduled to be sentenced on Friday, and is on course to be the first person to be formally punished for the January 6 riots.

She added that her client had also watched the Tulsa Burning, a History Channel documentary film about the 1921 Tulsa massacre and Mudbound, a 2017 film about the plight of a black man returning from World War II to a Jim Crow Mississippi.

Lloyd submitted a number of documents in her defense to prove she’d watched those books and films  including a movie review of Schindler’s List and book report on Just Mercy, a 2014 book by lawyer Bryan Stevenson chronicling his efforts to overturn wrongful convictions of Black people in the American South.

Also included was a letter Lloyd wrote apologizing for her involvement in the riot, and outlining what she learned from her reading and film viewing.

‘I honestly don’t remember when I found out we would be walking to the Capitol Building, but that was all it was going to be,’ she wrote adding. ‘I even did some shopping on the way.’

lloyd’s attorney told a federal judge that she recommended her client read Schindler’s list to learn of the plight of European Jews. The Oscar winning 1993 film based on the book starred Liam Neeson as the eponymous Oscar Schindler

She continued, ‘I’ve lived a sheltered life and truly haven’t experienced life the way many have. I don’t live a pampered life. My husband and I have worked hard for everything that we have. My lawyer has given me names of books and movies to help me see what life is like for others in our country.’

Lloyd said in cases where she could, she watched the movie version because, ‘it sinks in better.’

‘I’ve learned that even though we live in a wonderful country things still need to improve,’ she wrote. ‘People of all colors should feel as safe as I do to walk down the street.’

The two Indiana women were among the hundreds of protesters who stormed the Capitol building that day. If lloyd’s sentencing goes as scheduled on Friday she will be the first person formally sentenced in connection to the riot

The FBI obtained Facebook posts of Lloyd and Bissey at the riot, including a picture Bissey posted of the two captioned, ‘Inside the Capitol Building.’

Other posts included Lloyd writing, ‘I’m here. Best day ever. We stormed the capital building me and Dona Bissey were the first 50 people in,’ and, ‘That was the most exciting day of my life.’

Bissey has yet to plead guilty to the charges against her.

The 1993 Stephen Spielberg directed film Schindler’s List chronicles the efforts of the eponymous Oscar Schindler to save a group of Jewish people from the Płaszów concentration camp during World War II.

The 2014 book Just Mercy by attorney Bryan Stevenson outlines his efforts to overturn wrongful convictions of black people in the American South.

The 2017 film Mudbound shows the plight of a black man returning home from World War II to Jim Crow-era Mississippi.

Only parents should decide sexual education of their children | View

Only parents should decide sexual education of their children | View