Carrie Bickmore and fellow Channel Ten stars have taken a cheeky swipe at Scott Morrison after it was revealed he took a brief visit to a distant relative’s village during last week’s G7 summit in the UK.

The Prime Minister has came under fire from some after photographs emerged of him visiting the Jamaica Inn hotel in Cornwall, with Mr Morrison saying the uproar ‘massively overstated’ what went on as he stopped for lunch while on the work trip.

He was also criticised for a trip to his fifth great-grandfather’s Cornish village, despite the fact it was a brief stopover on the way to the airport.

But with Australians banned from travelling overseas due to coronavirus restrictions, hosts of The Project couldn’t resist piling in, calling the excursion ‘insensitive’ and ‘hypocritical’. 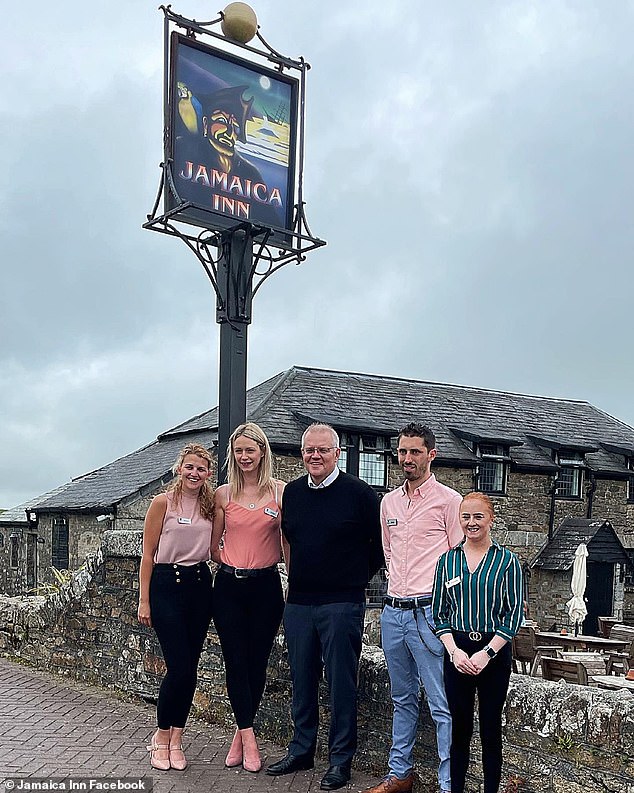 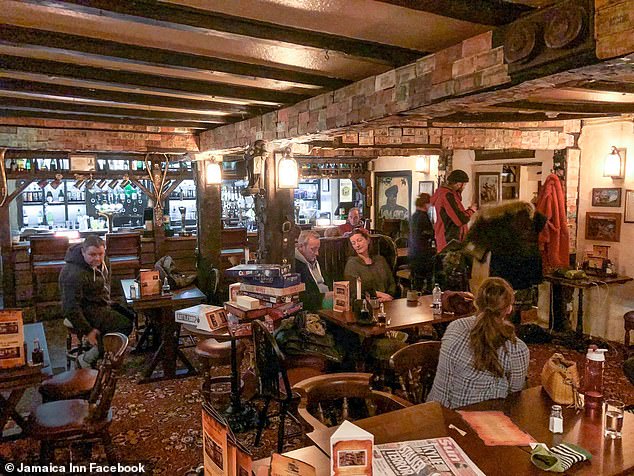 The Jamaica Inn hotel, in Cornwall, posted a social media image of the Australian Prime Minister visiting their drinking hole for a weekend lunch, during the three-day G7 summit at Carbis Bay, a one-hour drive away 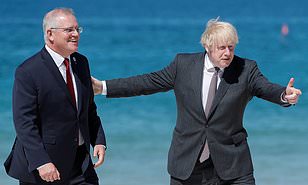 Is it hypocritical for Scott Morrison to fly to the UK as Australians are banned from travelling overseas?

‘Well, my great-great grandfather is in Mykonos so maybe I’ll just head over there,’ Bickmore joked, referring to the Greek party island.

‘Who is advising him? Just do the job and come home. At the moment it’s too sensitive.’

Co-host Steve Price said the day trip is a ‘terrible look’ for the government who have opted to keep Australian’s borders closed until at least the middle of next year.

‘That’s the second pub he’s been to on that visit,’ the conservative panelist said.

‘Now I don’t begrudge him on a working trip for going to a hotel, but his office has secretly worked on a journey into a little village to check out where his relatives came from.

‘Right now there are Australians still locked up in this country who can’t go and visit sick relatives overseas and haven’t been able to for 14 months.’ 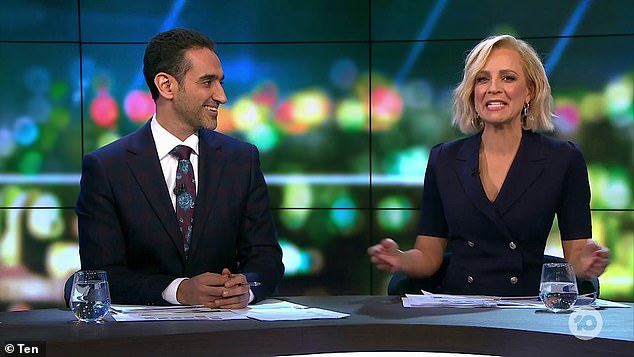 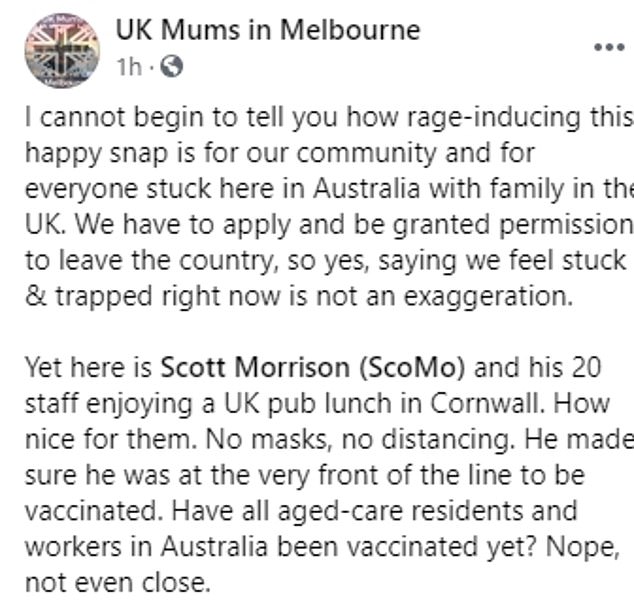 A Facebook group, UK Mums in Australia, protested about the ban on permanent residents leaving Australia for social visits unrelated to work

Mr Morrison on Monday hit back at the accusations of hypocrisy for travelling just a one-hour drive away from where the three-day G7 summit was held at Carbis Bay.

‘After the G7 on the way back to the airport we stopped at a place that just happened to be where my fifth great-grandfather was from,’ he told 2GB host Ben Fordham from self-isolation following his return to Australia.

‘I think it was pretty innocent and I think that’s massively overstating it.’

His ancestral relative William Roberts was brought to Australia as a prisoner on the First Fleet in 1786 for the crime of stealing five-and-a-half pounds of yarn. 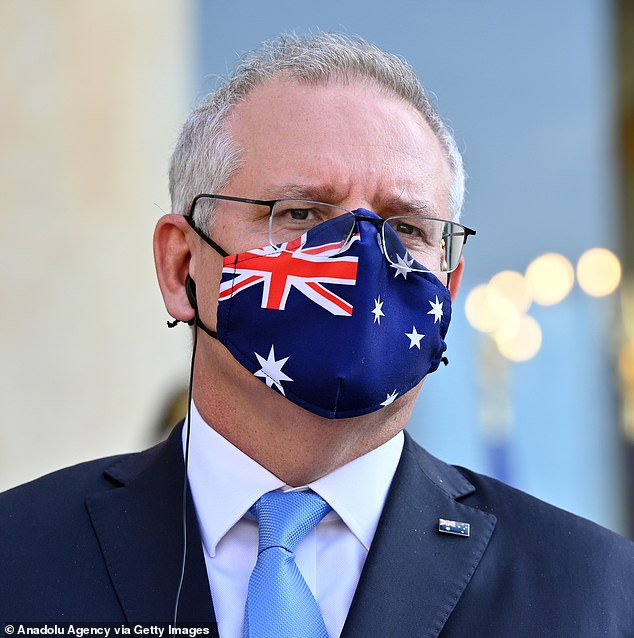 His fifth great-grandfather was born in St Keverne in 1755.

Despite copping a barrage of criticism, many Australians jumped to his defence.

‘He’s the Prime Minister for god’s sake. What’s he meant to do, hide under the doona?’ one person wrote.

Another said:  ‘Scott Morrison was invited to attend one of the most important meetings on earth, and he rightly took that opportunity to increase our profile and come back with a great trade deal.’

‘So good on him and shut up all you negative whingers’. 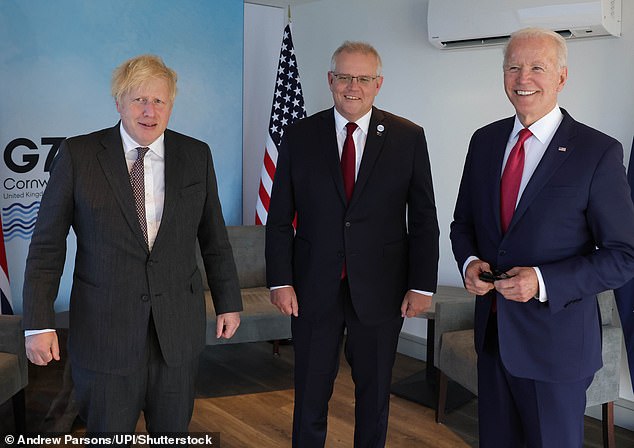 UK Prime Minister Boris Johnson invited Australia, India and South Korea to the June 11 to 13 G7 summit, even though they are not permanent members of the Group of Seven nations. Mr Johnson is pictured left with Mr Morrison centre and US President Joe Biden right on June 12

He also won the support of the G7 in condemning China’s human rights abuses and calling for a fresh inquiry into the origins of Covid, demonstrating the US, UK and the Europe Union could be united in the face of a more aggressive Communist superpower.

Mr Morrison was accompanied by personal advisers, public servants from the Department of Prime Minister and Cabinet and the Department of Foreign Affairs and Trade, along with Australian High Commission staff, based in London, during his pub visit on Sunday, Australian time.

His office also confirmed an official photographer and a press secretary were part of the entourage to the UK.