The April issue of the society bible features a photo of Miss Symonds, 32, taken at the State Opening of Parliament in October 2019 that has been edited to make her skin look significantly smoother and brighter.

The magazine promises an explosive profile charting the ‘rise and rise’ of Miss Symonds, who is described as the ‘most powerful woman in Britain’.

‘Tatler asks: “Who is the real Carrie Symonds? Is she the scheming Lady Macbeth pulling the strings inside No 10 or a fun-loving friend, feminist and mother, who just wants to save the planet?”,’ a statement announcing the issue revealed. 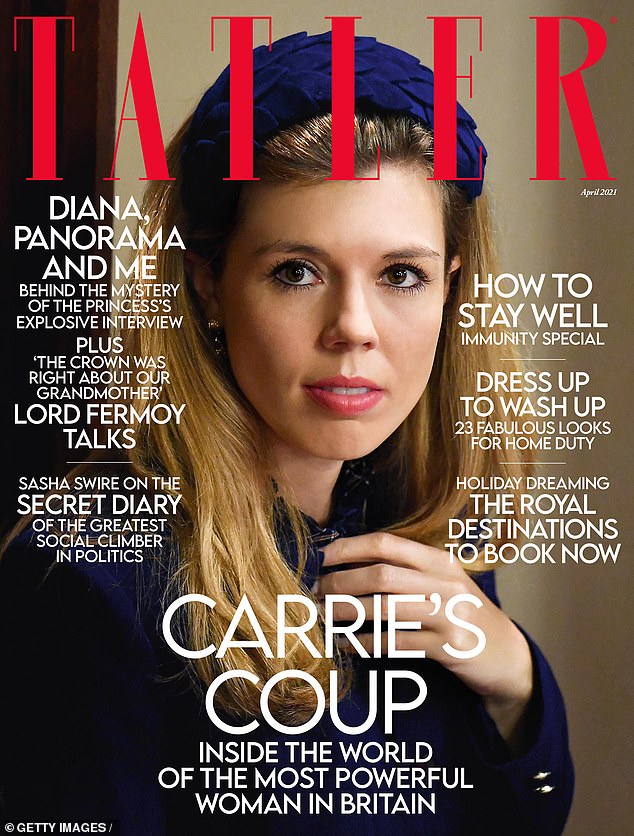 COVER STAR: The April issue of the society bible features a photo of Miss Symonds, 32, taken at the State Opening of Parliament in October 2019 that has been edited to make her skin look significantly smoother and brighter 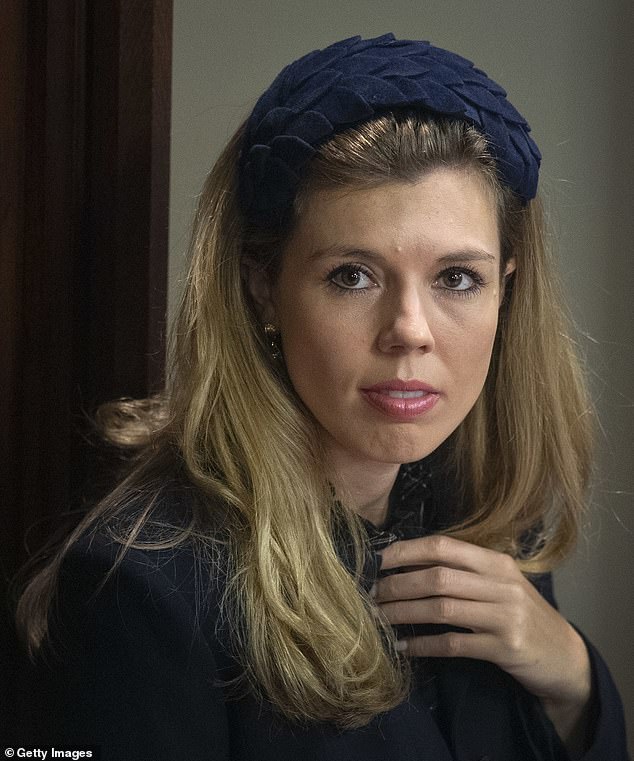 ORIGINAL: The photograph of Miss Symonds taken at the State Opening of Parliament in 2019

Speaking to the magazine, close friend and women’s rights campaigner Nimco Ali said: ‘She’s fun and kind, and she wants the world to be a better and a safer place for women. Can someone tell me what’s wrong with that?’

A poll conducted by the magazine revealed 69 per cent of British adults believe Miss Symonds ‘influences decision-making at No 10’.

One in three young adults say they prefer Miss Symonds to Boris Johnson, with whom she shares nine-month-old son Wilfred.

It comes days after one of Miss Symonds’s former colleagues claimed she has effectively become his Downing Street chief of staff.

Photography expert weigh in on the image

Paul Reiffer, Commercial Photographer (www.paulreiffer.com), said: ‘To be fair, not a lot has actually been done to the image other than smoothing and brightening her skin.

‘The shape and structure of her face remain unchanged – with no extreme alterations such as we see when people are trying to drastically change their appearance.

‘For the skin itself, there are several methods that people use, such as “frequency separation” in digital processing, which has the effect of smoothing out texture and blemishes, with a few “heals” done on some temporary bumps that we all have on our faces from time to time. The shadows under her eyes and on her nose have been softened, which is a standard process for many headshots.

‘Her skin has been brightened, and the overall image saturated slightly to give it a “boost” (not just on her, but her hat and background too). Some contrast has been added through “dodging and burning” (lightening and darkening) certain sections.

‘There’s a small shadow removal on her neck from where the light fell through her hair, but otherwise the image is just a “fresher” version of the original – and what I’d often see coming out as the final product from a portrait shoot.’

Miss Symonds’s ‘unelected and unaccountable’ role in Government is ‘damaging to democracy,’ according to Nic Conner, who worked with Miss Symonds on the Brexit campaign.

He told the Daily Mail that he has no grudge against the former director of Tory communications and was not being sexist, but is concerned she is acting unconstitutionally as friends are hired and rivals fired inside No 10.

Mr Conner said: ‘In light of my experience working with Carrie Symonds, I am deeply concerned that she should have any role in governing the country without authority or accountability.

‘Anyone holding so much unelected power, and who cannot be removed, is not only unconstitutional but is damaging to British democracy.’

Mr Conner’s comments came after the conservative think tank, the Bow Group – of which he is a research fellow – called for an independent inquiry into the role of Miss Symonds within government.

Bow Group chairman Ben Harris-Quinney added: ‘No romantic partner of the PM has ever involved themselves to this degree. It’s completely unjustifiable in a modern democracy, and calling me or the Bow Group sexist doesn’t change that.’

The Bow Group wants an inquiry into Miss Symonds’s alleged role in pushing out key Downing Street advisers. It also claims she was instrumental in appointing her close friend Nimco Ali as a Home Office adviser, and recruiting other allies to Downing Street.

Mr Harris-Quinney said: ‘Failure to clarify Ms Symonds’ position and authority, and to ensure that Ms Symonds is not and cannot take any action in governing the United Kingdom, potentially has huge hazards for the Government, the Conservative Party, and the nation. The public take a very dim view of cronyism, democracy in Britain is and must always be sacred, and no one should be involved in running our country without accountability to the people.’

The most prominent casualty of Miss Symond’s alleged influence was Mr Johnson’s right-hand man Dominic Cummings, who left in November after clashing with her.

Mr Cummings’s ally, communications chief Lee Cain, soon followed him out of the door amid claims that Miss Symonds was calling the PM 20 times a day, and had been nicknamed ‘Princess Nut Nut’ by her detractors.

In their place, a new group has grown in Downing Street consisting of allies of Miss Symonds and Cabinet Office minister Michael Gove. 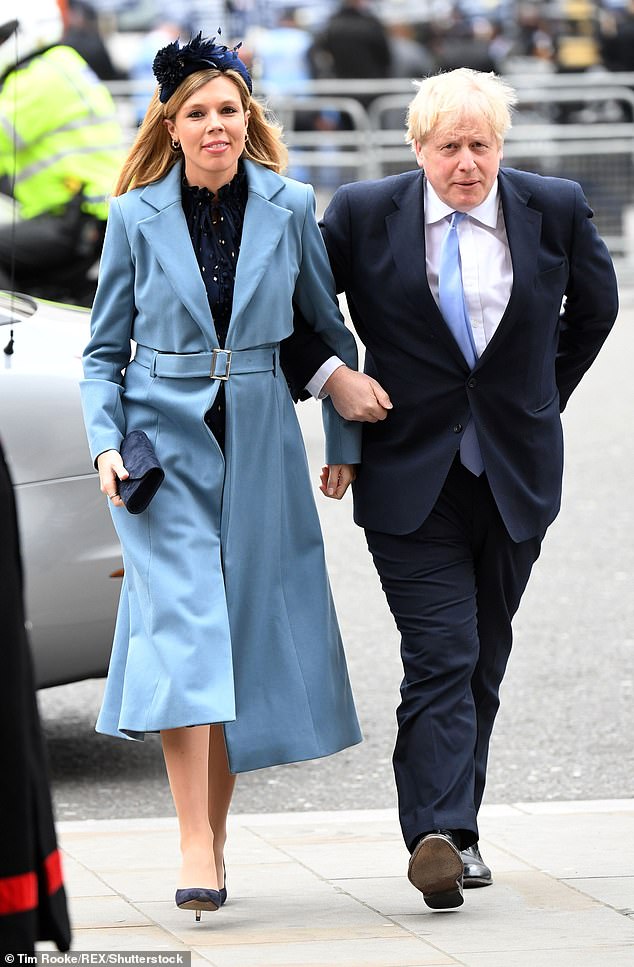 A poll conducted by the magazine reveals 69 per cent of British adults believe Miss Symonds ‘influences decision-making at No 10’. One in three young adults say they prefer Miss Symonds to Boris Johnson. Pictured, Miss Symonds with Boris Johnson in March 2020

These include her friends Henry Newman and Baroness Finn. Brexit negotiator Lord Frost, who was close to Mr Cummings, is thought to have tried to quit in protest at their arrival but was persuaded to stay and has been rewarded with a place in Cabinet. Fresh battles became public on Friday when Oliver Lewis, another Cummings supporter, resigned as head of the Union Unit.

It was claimed that he had been briefing against Mr Gove and had been forced out as a result. But in a weekend of briefing and counter-briefing, it was also claimed Mr Gove had masterminded Mr Lewis’s departure over fears he was being sidelined by the PM.

Meanwhile Miss Symonds has been appointed head of communications at conservation charity the Aspinall Foundation, which is run by gambling tycoon Damian Aspinall. Earlier this month it was revealed that the organisation is being investigated by the Charity Commission amid concerns about what it calls ‘financial management and wider governance’.

A spokesman for Miss Symonds declined to comment on the allegations against her at the time they were originally published in the Daily Mail.

The April issue of Tatler is available on newsstands and via digital download on Thursday 4th March.