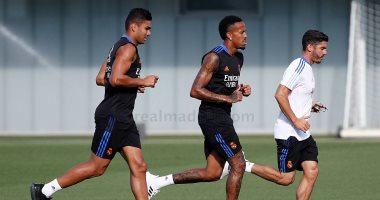 The Brazilians Casemiro, Eder Militao, Vinicius Junior and Uruguayan Federico Valverde, who played at dawn yesterday matches with their national teams in the qualifiers for the Qatar World Cup 2022, and participated in the training session conducted by Real Madrid today, Friday, in preparation for hosting the Celta Vigo team on Sunday.

The Real Madrid team opens the doors of the (Santiago Bernabeu) stadium for the first time after 559 days of closure to carry out repair work, and will host Celta Vigo in the fourth round of the Spanish first division championship “La Liga”.

According to Real Madrid’s statement on its official website, Casemiro and Militao held a solo training session after their main participation in the last Brazil national team match that brought them together with the Peru national team, while Vinicius, who sat on the bench throughout the last international meeting, trained normally with the group.

For his part, Valverde, who played the entire Ecuador match, worked inside the facilities of the (Sports City) Valdebebas, along with German Toni Kroos and Spaniard Dani Ceballos, who are continuing their recovery from their injuries.

Welshman Gareth Bale, who played Wednesday against Estonia, and Austrian David Alaba, who faced Scotland on Tuesday, trained separately, unlike Belgium’s Eden Hazard, who participated in his country’s qualifying matches for the World Cup in Qatar and who worked with the group and under the command of Italian coach Carlo Ancelotti.

After half an hour working in the gym, the Real Madrid players performed several exercises of running around the field, possession, pressing and shooting on goal.