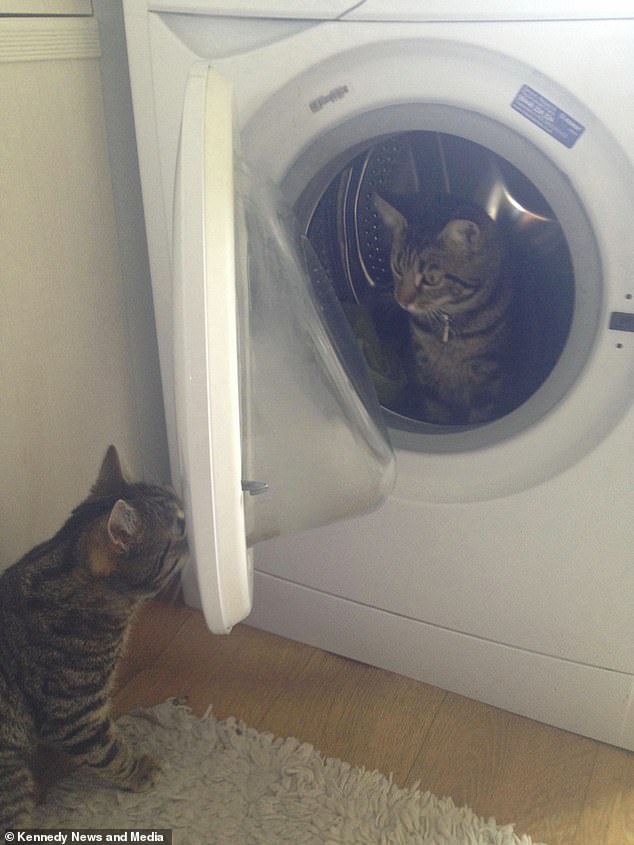 Fur-crossed lovers! Cat is caught shutting his ‘girlfriend’ in the WASHING MACHINE during a ‘tiff’

A fledgling feline romance was left in a spin after a cat was filmed shutting his ‘girlfriend’ in a washing machine.

Once Kimber is inside the machine, Caesar rushes over to the door and jumps onto his hind legs to push it shut.

The final picture in the Shakespearean sequence shows wide-eyed Kimber staring forlornly out of the door.

Caesar the six-year-old cat was caught shutting his girlfriend Kimber in a washing machine at his owner Sam Beacon’s home in Ripley, Derbyshire 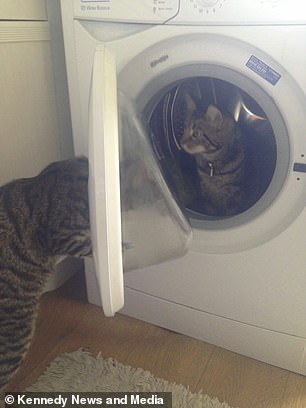 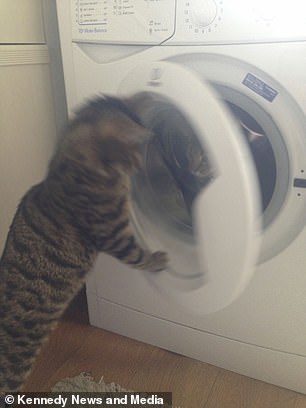 Kimber is eventually sprung from the washing machine by owner Sam.

Despite the brief tiff, 29-year-old Sam said the loved-up duo soon made up and were back to their usual ‘playful’ selves in minutes.

He said: ‘These pictures sum him up, he’s so playful.

‘Caesar and Kimber have been little boyfriend and girlfriend but they’d obviously had a bit of a lovers’ tiff.

‘It just so happened I was in the kitchen and they were both exploring. 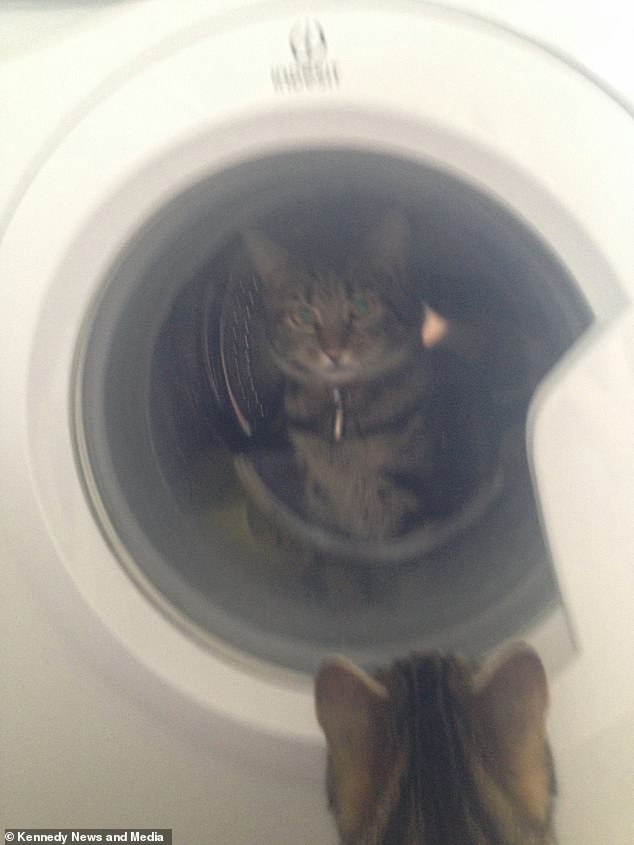 Caesar stops to admire his handiwork for a moment, with Kimber now trapped inside 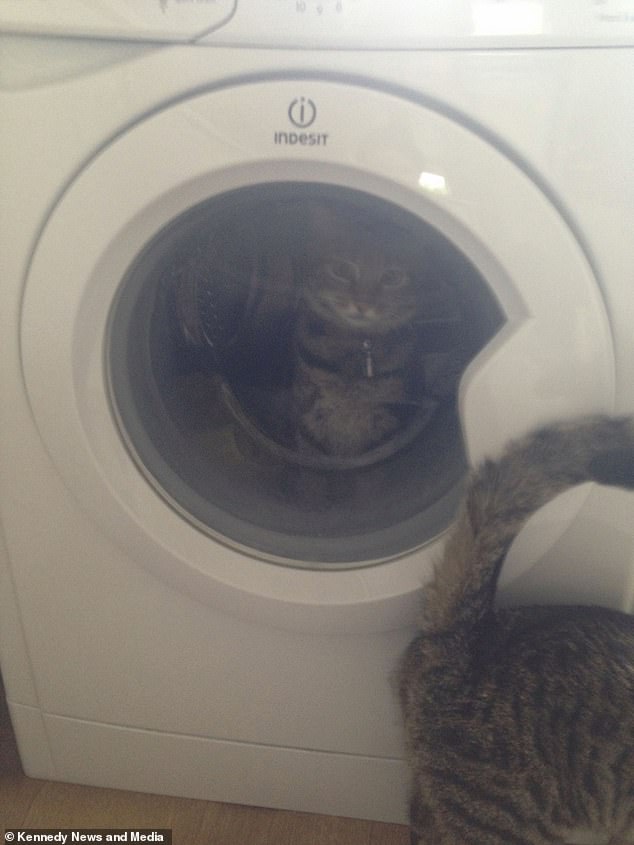 He then wanders off, leaving Kimber looking forlornly out of the washing machine door

‘I’d taken some washing out of the machine and Kimber jumped in because the door had been left open.

‘I turned round and said ‘Kimber, what are you doing?’ and then Caesar jumped up, shut the door, looked at her, walked away and then went outside.

‘Kimber was sat there in the washing machine just blinking at me as if to say ‘what is going on?’

‘I’ve no idea what was going through Caesar’s mind at that point.

‘He’s never been in the washing machine himself. I just think he’d seen me open and shut the door [so did it too]. 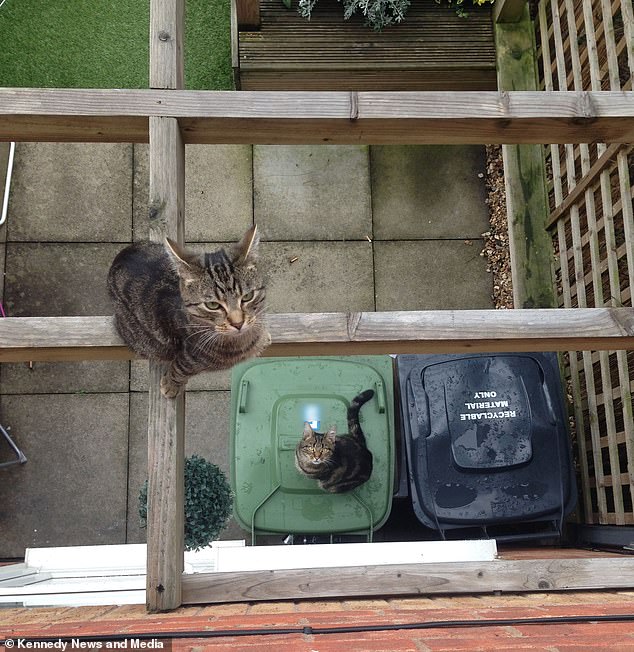 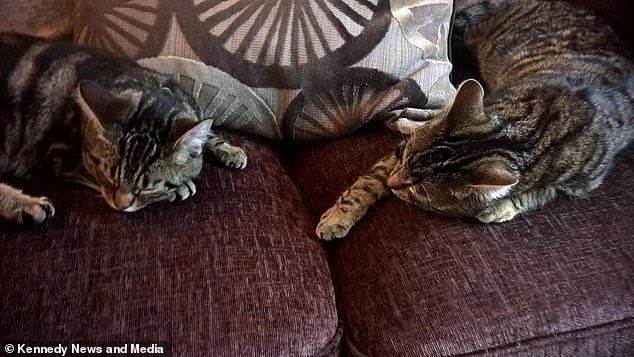 When not playing with each other, Caesar and Kimber can be found curled up next to each other

‘He leaned on it with his paws and he pushed it to, it didn’t click shut.

‘Then he got down, looked at her and walked away. She was only in there a matter of seconds.

‘I told the neighbours and told them not to worry as I let her out straight away.’

Sam also said that Kimber and Caesar are usually inseparable and can often be found playing together or curled up next to each other.

If the pair are ever separated, Caesar will leave dead mice and birds for Kimber on the fence for her to eat. 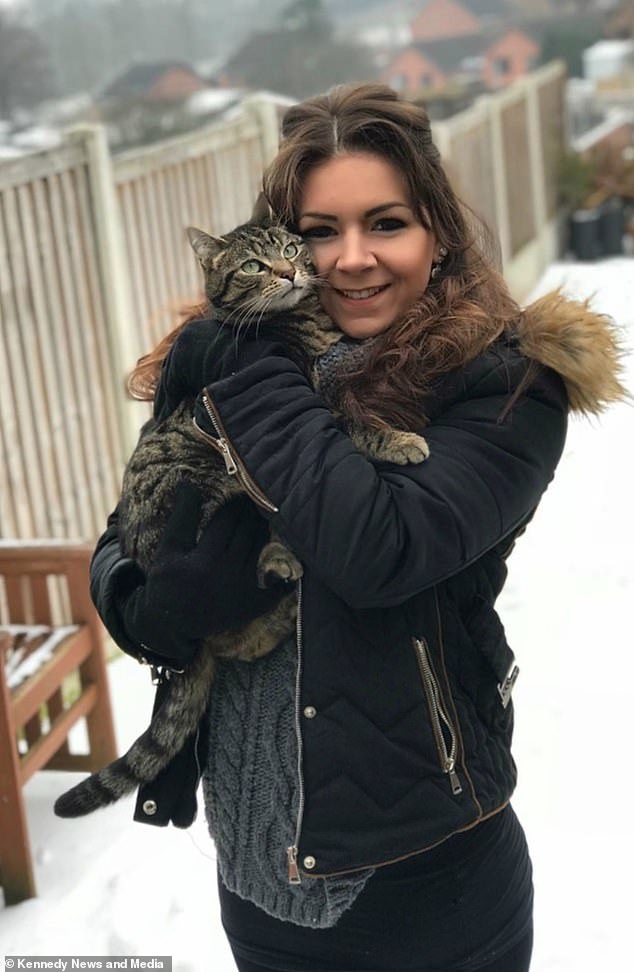 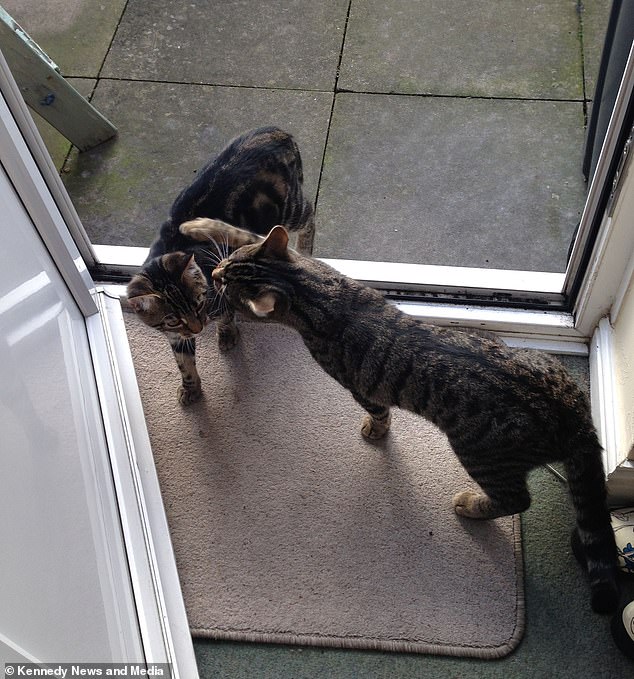 If the two cats are ever separated, Caesar is known to leave dead mice and birds on the fence for Kimber to eat

Sam said: ‘Caesar always wants to play with other cats but they aren’t that sociable with each other so most of the time they just hiss at him and then he’ll run away.

‘Kimber is a girl version of Caesar as she wants to play as well.

‘They chase each other and roll around together. It’s not fighting, it’s just playing.

‘They are always together, she is his first girlfriend.

‘I quite often leave my window open downstairs for Caesar to come in and out and in the mornings Kimber has come in the house too.

‘I would see Caesar next to her asleep and I would think ‘aww how cute is that?’

‘Caesar catches birds and mice – which I never liked but it comes with having a cat – and then leaves them on the fence for Kimber.

‘He never eats them and later on I will find Kimber eating whatever he’s brought as a romantic gift. It is so lovely.’

Dozens of rallies to march through France against security bill