And the Scottish champions’ stop-start season, a campaign entirely lacking in momentum, is once again up against the buffers.

Lukas Julis bagged a historic hat-trick for a visiting side supposedly in crisis. A team who, despite missing a whole slew of certain starters, also hit the woodwork three times. 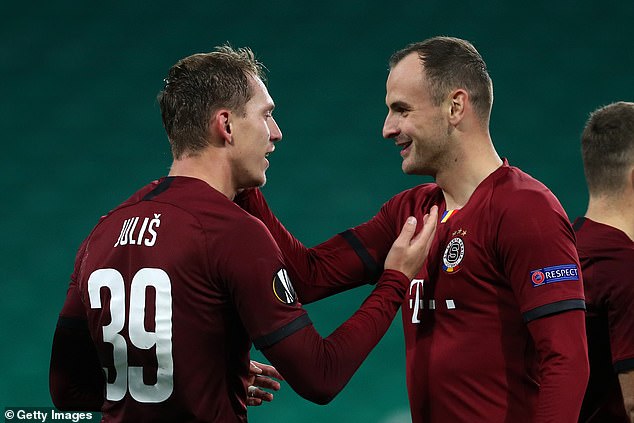 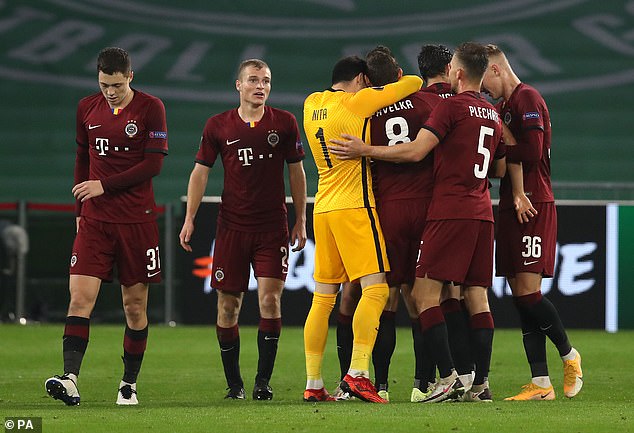 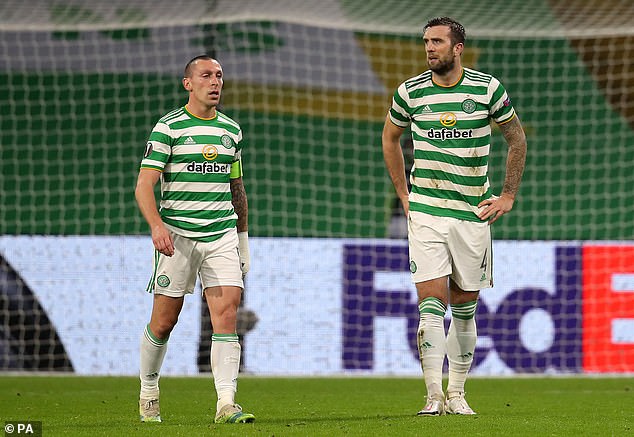 On a night when Celtic’s back line was breached with alarming regularity, all Neil Lennon’s men could muster in response was a well-taken goal by substitute Leigh Griffiths. If briefly making the score 2-1 gave the hosts some hope, it didn’t last.

Julis became the first opposing striker to bag a hat-trick here since Eric Black back in 1983.

And substitute Ladislav Krejci scored with 90 minutes gone to make it 4-1 at time up. Not even the most blinkered Celtic fan could claim that their team really deserved much more. 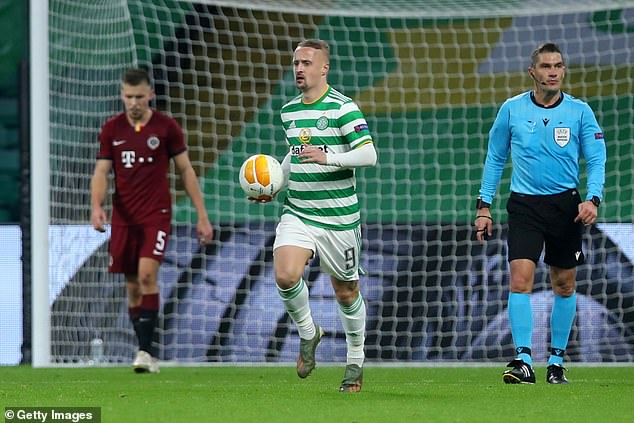 Leigh Griffiths pulled a goal back in the 65th minute, tapping in the rebound after Tom Rogic’s shot was saved 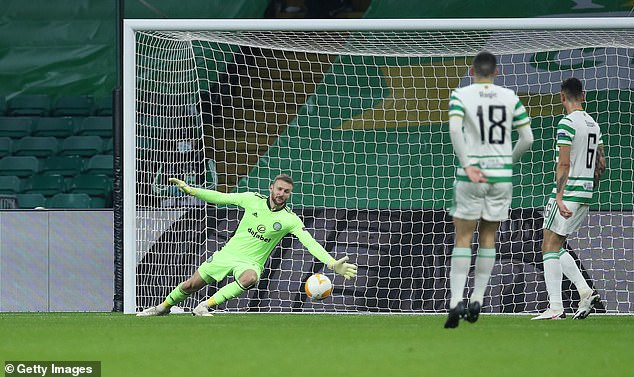 All over the park, they had players struggling for form. From a sluggish Odsonne Edouard to a lumbering Shane Duffy, there were too many having an off night. Another one.

And they got precisely what they had deserved. A third consecutive home loss for the first time since 1990. A defeat that few had predicted.

Sparta had, of course, stressed their weakened state at every opportunity during the build-up to this one.

Without a domestic fixture for a month because of Covid restrictions back home, head coach Vaclav Kotal reported seven key players lost to either injury or ‘health concerns’.

Lennon, who had the luxury of sticking with the starting line-up from the weekend win over Aberdeen at Hampden, had every right to expect a victory from his men.

Ryan Christie and Jeremie Frimpong looked bright enough down the right flank for Celtic early on, moving the ball around and running in behind defenders.

Without the ball, the home side also had an eagerness about them in the opening stages.

After 20 minutes, it all looked to be going swimmingly. Funny how games change, isn’t it?

The transformation began with former Kilmarnock loanee David Moberg-Karlsson forcing a fine save from Scott Bain and then hitting the woodwork in the space of 30 frantic seconds.

Celtic looked shocked by this turn of events. And their minor wobble was punished with extreme prejudice.

Penning their hosts in, Sparta might have gone ahead when a Julis volley was turned over the bar by Bain.

From the corner conceded, defender David Hancko was able to rise unmarked in front of the near post and head the ball against the goal frame.

If there was an element of luck in the rebound falling to Julis at the back post, the forward’s volleyed finish represented a moment of real quality.

If his players wanted to avoid hearing all about it at half-time, they needed a quick response. And, in fairness, they very nearly got one with 37 minutes gone.

Christie’s left-footed delivery into the box from the right flank was pretty enough to be hanging in an art gallery. As Mohamed Elyounoussi ghosted in with all the stealth and grace of a cat burglar, he beat the Sparta keeper to the ball but watched in agony as his improvised finish just clipped the top of the bar. 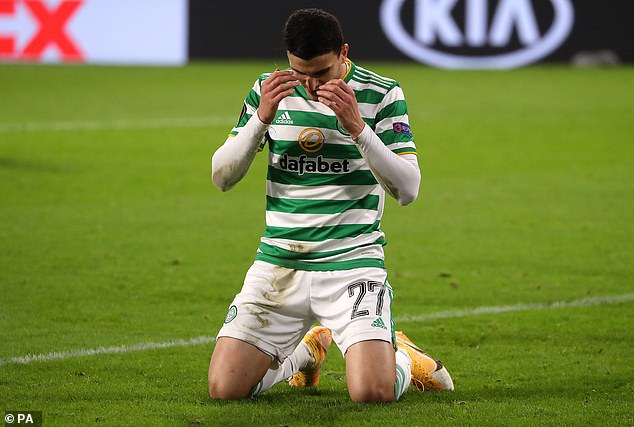 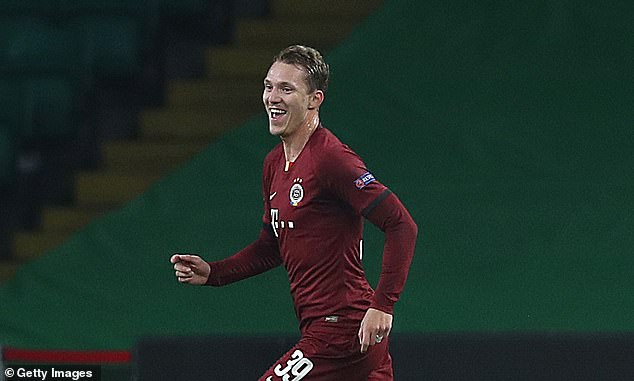 Tom Rogic also forced a decent enough save from Florin Nita just before half-time, courtesy of a Frimpong run and cut-back.

But all of Celtic’s worst nightmares came to pass just as the referee was about to blow for the interval.

Moberg-Karlsson was again involved, his sheer pace down the inside right channel putting Nir Bitton on the back foot — and creating just enough room for a clipped ball to the back post.

Although Scott Brown was making a recovery run into that area, he couldn’t get any distance on his attempted clearance, a back header going against his direction of travel.

Andreas Vindheim cushioned the ball into the path of Julis, who stepped beyond a rushing Callum McGregor with a drop of the shoulder — and beat Bain with a low finish.

Cue bedlam on the Sparta bench. This was beyond their wildest dreams. And the stuff of night terrors for all at Celtic.

It very nearly got a whole lot worse with barely a minute of the second half gone, too, Bain simply passing the ball directly to the opposition from his own goal area.

Mercifully, for all in the home ranks but especially the goalie, Julis couldn’t complete his hat-trick from the opening.

Duffy had to make a brilliant recovery tackle moments later as Moberg-Karlsson raced through following a misplaced back pass from Rogic. 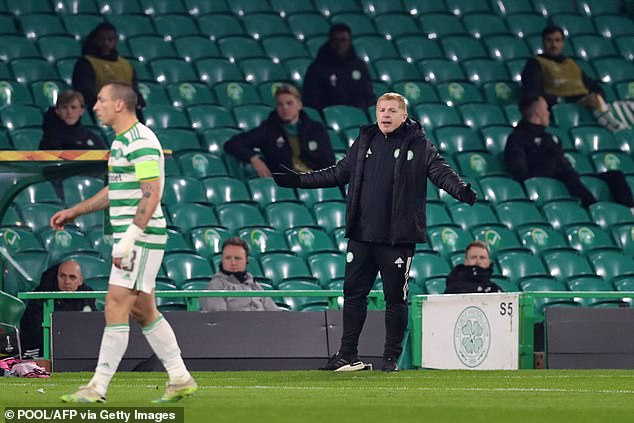 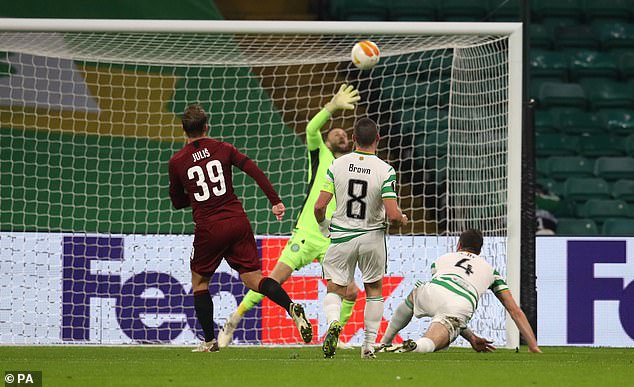 Celtic had no option but to chase the game. If that meant giving up chances, none more glaring than when Michal Sachek hit the post from a three-on-three break, they also carried more threat.

The introduction of Griffiths to partner the underwhelming Edouard was a factor, with the change of formation also giving Rogic more freedom.

And it was that pairing of Rogic and Griffiths, playmaker and striker, that got Celtic back into this game with 65 minutes gone.

The Scotland international played a neat pass into his Australian team-mate, who took the ball on the half turn and forced a point-blank save from Nita.

Griffiths, naturally, was right on the spot to put the rebound beyond the veteran Romanian keeper.

Griffiths himself forced Nita into a punched save with a free-kick from an improbable angle, teasing everyone into believing that the comeback was on.

But this tie, this unequal contest, was put to bed when Julis completed his treble 14 minutes from time. 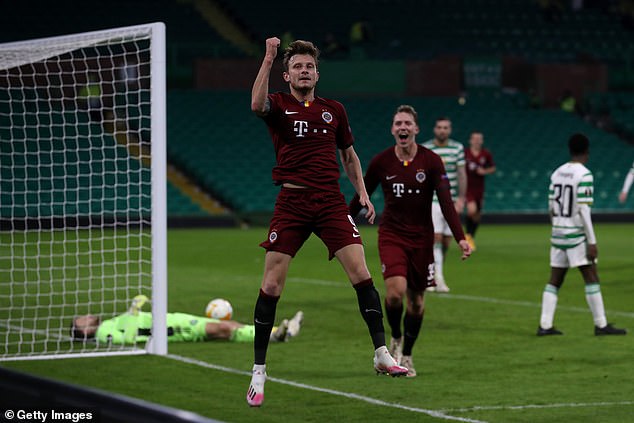 Yes, Celtic had no option but to go man-for-man at the back. You can’t blame anyone for Sparta having an overload as they launched a quick counter-attack.

But Duffy diving in on Moberg-Karlsson, instead of just holding him up, made it easy for the Swede to drive into the box and lay the ball on a plate for Julis.

The big man was clattered as he put the chance away with a sliding finish. Unlike Celtic, however, he was feeling no pain.

By the time Krejci rose to nod him a fourth for the visitors just into added time, there was plenty of agony to go round. All of it confined to the home ranks.

With her sensible shoes and quilted jacket zipped up to the neck, Ali Harris looks like...