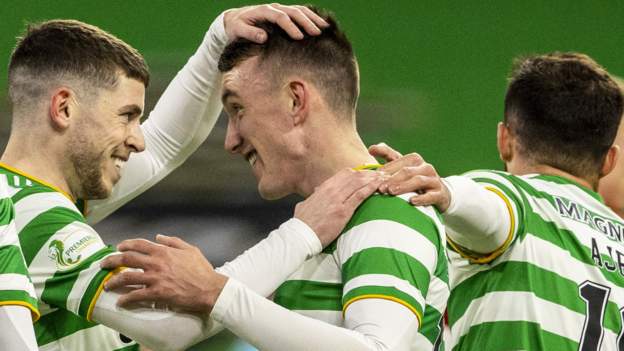 Celtic have reduced Rangers’ lead at the top of the Scottish Premiership to 15 points after beating Aberdeen in Glasgow for a fifth consecutive win.

Florian Kamberi almost levelled from a similar distance, his low shot bouncing off the left-hand post.

And there was to be no leveller, meaning Aberdeen set a club record of six games without a goal, during which time they have picked up three points.

Derek McInnes’ side, in fourth place, remain four points behind Hibernian, who have a game in hand, while Neil Lennon’s Celtic and Rangers have both played 29 of their 38 league games.

Kamberi should have made more of a tame effort that Scott Bain collected moments before the Turnbull opener.

The midfielder was afforded far too much space when receiving Callum McGregor’s pass midway inside Aberdeen’s half and punished the Dons with a fierce low strike past Joe Lewis.

Swiss striker Kamberi claimed unsuccessfully for a penalty after his cross came off Stephen Welsh’s hand and Dean Campbell then got in behind Celtic’s defence to cross for Fraser Hornby, who could not connect.

Kamberi was inches away from levelling when he collected Campbell’s pass and fired powerfully against the upright.

Odsonne Edouard tested Lewis as Celtic looked to make the scoreline more comfortable and Turnbull’s next shot was deflected wide.

McGregor and Turnbull combined again early in the second period but the latter’s shot was hacked clear.

Hornby got decent purchase on a shot on the edge of Celtic’s box but Bain was untroubled.

Ryan Christie’s lob dropped over the Aberdeen bar amid a raft of changes from both sides and substitute Patryk Klimala was denied by Lewis.

And, in stoppage time, the Dons poured players forward and Tommie Hoban’s volley was blocked by Welsh.

Man of the match – David Turnbull

Celtic were less dominant than they had been in recent games and rarely threatened to move up through the gears.

Edouard’s return to form has been the catalyst for their recent resurgence but Turnbull has impressed consistently since becoming a regular in the starting line-up.

Aberdeen’s performance was a vast improvement on Saturday’s stalemate with St Mirren and their continued lack of goals is not for the want of trying.

However, if the Dons are to persist with 3-5-2, they will need to get their wide men much further forward to create more chances.

Celtic are away to Scottish Premiership bottom side Ross County on Sunday (19:30 GMT). Aberdeen are at home to Kilmarnock on Saturday (15:00).