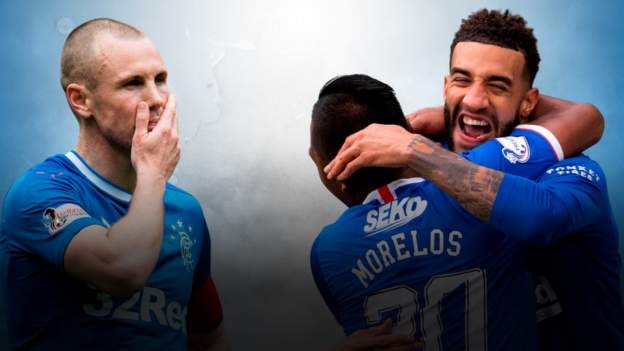 
Ten in a row has been stopped. Fifty-five in total have been claimed at the other side of Glasgow as a result. But on 2 September, 2018, a dismal dozen was the number that failed to add up for Rangers.

On that day, an Olivier Ntcham goal was enough to deny the Ibrox side an Old Firm draw, continuing a 12-game pointless run in the derby.

A win against their city rivals, let alone talk about Celtic failing to offer a title guard of honour, seemed a long way off. But Steven Gerrard’s side arrive in the east end of Glasgow on Sunday as champions, undefeated in the league, and the team in the ascendency in this famous fixture.

But how have they turned their derby fortunes around?

How far have Rangers come?

The sun was shining on Celtic Park on 10 September, 2016 as a dark cloud was cast over the visitors. Moussa Dembele scored a hat-trick in a 5-1 win for Brendan Rodgers’ side.

The dominant sequence of games was kick-started in spectacular fashion. Ten wins were notched up in an unforgiving run, with just two draws to salve the wounds inflicted upon a stuttering Rangers.

A quartet of games were won with at least a four-goal margin, while Rangers failed to score in seven of those fixtures. Alarmingly, the aggregate score across all 12 games totted up to 31-6.

“It was the beginning of the upper hand in that game,” former Celtic defender Erik Sviatchenko told BBC Scotland. “We were miles ahead of Rangers, which was shown in all the matches.

“Everything was in the green and white favour. It was the beginning of something great. Nothing lasts forever, unfortunately.”

The moment Rangers’ fire was ignited again in this fixture was Ryan Jack’s goal on 29 December, 2018. It earned the hosts a craved win, stopped the rot, and more importantly bolstered a belief that Celtic could be toppled in this ferocious fixture.

Both sides won one of the remaining two jousts that season, with Rangers going on to win three of the next five. Even in defeat there was hope for the blue half of the divide, particularly in the 2019 League Cup final as 10-man Celtic scored with their only shot on target to somehow claim victory.

A spread of goals has taken the pressure off a misfiring Alfredo Morelos. The Colombian striker has yet to score against Celtic, but seven others – including a Callum McGregor own goal – have found the net.

At the other end, Rangers have tightened up. Since that win in September 2018, Gerrard’s men have let in on average 0.7 goals per game compared to a staggering 2.5 per match on the run of 12 games.

Under Gerrard, Rangers have played on the front foot in these encounters. Sides led by his predecessors allowed Celtic to dictate, but the former Liverpool captain has won five of nine derbies, including the most recent three.

How important has the Old Firm swing been?

The answer depends on your interpretation.

Let’s look at the numbers first. Rangers have won both Old Firm games this season, building up a 20-point lead over their rivals in the process.

Had those results fallen the other way, Rangers would still be leading the Premiership, but with an eight-point advantage. It would mean the title would not yet be won, but Gerrard’s men would still be in a strong position.

But it is the psychological impact that may have proven crucial in this year’s title success.

In the last meeting in January, Celtic bossed a must-win match at Ibrox. Yet a second-half collapse, including Nir Bitton being sent off and McGregor netting at own goal, proved costly.

It cleaved open a 19-point chasm between the pair, with Celtic departing for their controversial Dubai training camp immediately after full-time.

A couple of suspicious social distancing photos, a Covid-19 outbreak, and a January crisis of confidence, and the title race was effectively over.

The defeat was the catalyst for Celtic’s collapse but provided a springboard for a prosperous 2021 for their rivals. Rangers have won nine of 11 Premiership matches – drawing the other two – this calendar year, with Celtic winning just seven out of 14.

“When I joined, the message from every fan I met was to beat Celtic,” said Rangers defender Connor Goldson. “It was about winning that one game.

“We have turned that around this season to winning the whole season and no matter what happens in the Old Firms, you still have another 34 fixtures to play and you have to be successful in every other fixture as well. That is the mentality that I have seen change this season.

SAS will be ordered to counter Russian meddling

Chairman of the Turkish Military Industries Authority: Our drones are the best

Chairman of the Turkish Military Industries Authority: Our drones are the best