The brave crew on board the space shuttle Challenger likely survived the first seconds after a devastating explosion due to the malfunction of one of the parts.

In his new book ‘The Burning Blue: The Untold Story of Christa McAuliffe and NASA’s Challenger’, Mr Cook claims that the crew ‘were conscious, at least at first, and fully aware that something was wrong’ in the moments after the explosion over the Atlantic Ocean in Florida in 1986.

As it later came to light, the cold weather had stiffened the rubber O-rings holding the booster sections together, which contained the explosive fuel.

What happened on board the Challenger Space Flight? 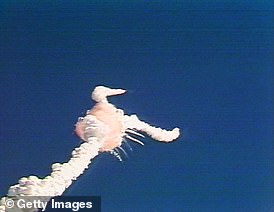 There had been concerns on the morning that the Challenger Shuttle was due to fly in January 1986 because of cold temperatures and concerns around some of the equipment.

It was known that the O-rings, which hold the booster sections containing rocket fuel together, sometimes failed to fully expand in cold weather. This meant that a gap would be left between the booster sections, allowing the superheated fuel to burn through.

Video footage captured of the liftoff show smoke escaping from the booster sections, resulting in a small flame which grew and caused the explosion.

It is believed the crew on board survived the initial explosion, but that the terminal velocity of the fall of the shuttle back into the ocean at more than 200 miles per hour was fatal.

The cold meant that the rings failed to fully expand, leaving a gap of less than a millimetre between booster sections, allowing a few grams of superheated fuel to burn through.

Just 73 seconds after liftoff, the small flame grew, rupturing the tank and igniting the hydrogen fuel, causing the explosion.

But, the interior of the crew cabin, which was protected by heat-resistant silicon tiles made to withstand re-entry, was not burned up.

Instead, it was sent blasting into the sky, subjecting the passengers to 20 G’s of force, which was far more than the three G’s their training had accustomed them to.

An investigation later found the jump in G-force had been survivable and the probability of injury was ‘low’.

The investigation also showed no sign of sudden depressurisation which would have knocked the passengers unconscious. Further examination of the wreckage also found that three of the astronauts’ emergency air supplies had been switched on, indicating that some of the crew had survived the initial explosion.

It is also believed that Mr Smith tried to restore power to their shuttle, as switches on his control panel had been moved.

The object dropped back down to earth some 12 miles above the Atlantic Ocean, reaching a terminal velocity of more than 200 miles per hour.

Mr Cook’s book focuses in on Christa McAuliffe, 37, a social studies teacher who had won NASA’s Teacher in Space contest and earned herself a spot on the mission on January 28 as a payload specialist.

As the would be first civilian in space, there was huge media attention on the flight, with Mrs McAuliffe hoping to prove that ‘teachers have the right stuff too.’

Mr Cook writes: ‘With the election three months away,’ the author writes, ‘the president and his advisors saw a chance to promote the space program and win teachers’ votes in one stroke.’ 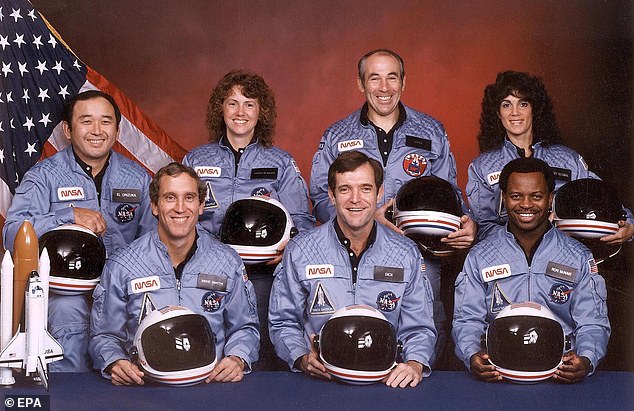 She applied along with some 11,000 other teachers and was ultimately selected to board the flight.

In the months before the flight, Mrs McAuliffe went through rigorous training, but the flight was hit with several delays, including an attempt on January 26 1986 which was scrapped due to rain.

Another attempt the following day was scrapped after NASA techs struggled to fix a hatch malfunction.

The fatal flight flew the following day, despite concerns over the cold weather.

Mrs McAuliffe was buried in Concord in an unmarked grave as her husband feared that tourists would come to the site.